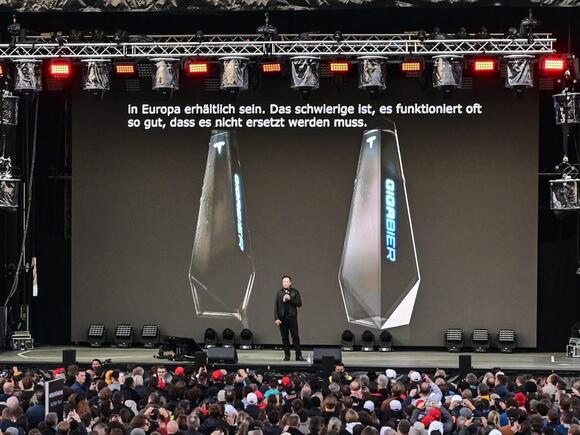 Musk revealed Tesla's "Giga Beer" during an event held at the Berlin gigafactory construction site last week. The beer bottle's futuristic design appears to mimic the style of Musk's beloved Cybertruck, with a Tesla logo imprinted on one of its angular panels.

Tesla officially owns the trademarks for both Giga Beer and Giga Bier, according to the United States Patent and Trademark Office. The trademark request was filed on October 11, two days after the beer was revealed in Berlin.

Last year, the automaker launched the $250 limited-edition Tesla Tequila, sold in a gold lightning-bolt bottle. A second batch was released this March and quickly sold out in hours, Insider's Tim Levin reported . Now, resellers have listed the empty bottles online for thousands of dollars, even without the tequila inside.

Despite its popularity, Musk's alcohol endeavors have been categorized alongside his other "gag products" such as red satin short shorts and a fire-spewing device called the "Not-a-Flamethrower."

Tesla did not immediately respond to Insider's request for additional details about Giga Beer, such as its pricing and flavor.

A $50,000 camper that turns the Tesla Cybertruck into an RV has hit $100 million in preorders — see inside

An artificial intelligence and software company is making camper attachments for Tesla Cybertrucks. Stream It has already had $100 million in preorders for its CyberLandr, the company announced Wednesday. See inside the $50,000 CyberLandr, which will be produced and delivered in tandem with the Cybertruck. Chatter about Tesla's upcoming Cybertruck...
CARS・39 MINUTES AGO
The Motley Fool

Should investors set shares of Tesla on autopilot in their portfolios, or is it time to pump the brakes?
STOCKS・12 HOURS AGO
Business Insider

Elon Musk sold a San Francisco mansion, which was his last remaining home, for $30 million

Elon Musk sold his final home, a California mansion, for $30 million, according to MLSListings.com. Musk said previously he would sell his property portfolio to fund a Mars colony. He told Twitter users in June that he lives in a $50,000 Texas home, which he rents from SpaceX. Tesla and...
SAN FRANCISCO, CA・10 HOURS AGO
Mercury News

Tesla Inc.’s Elon Musk spoke out in opposition to President Joe Biden’s signature economic package, questioning the need for legislation that would support electric-car adoption due to concerns government spending is out of control. “Honestly, I would just can this whole bill,” Tesla’s chief executive officer said late Monday, during...
FREMONT, CA・1 DAY AGO

Tesla CEO Elon Musk talked the future of mankind, government spending and his companies from the new Tesla headquarters at Giga Texas in southeast Travis County for the Wall Street Journal's CEO Council this week.The interview covered a lot of ground, from his view that the $2 trillion reconciliation bill pending in the Senate should just be canned to his thoughts on declining birth rates. On the latter, he made a dire prediction that "civilization is going to crumble" if people don't have more children. He also talked about his multitasking, saying he splits his time somewhat evenly between Tesla...
AUSTIN, TX・4 HOURS AGO
Indy100

Elon Musk has revealed why he decided to have so many children - and people on social media are raising their eyebrows. In a Wall Street Journal virtual event on Monday, the Tesla and SpaceX CEO countered arguments that population control is needed worldwide. Addressing his ​latest creation, the Tesla...
CELEBRITIES・7 HOURS AGO
MarketWatch

Pete Buttigieg fires back after Elon Musk blasts federal spending on EVs, saying there are ‘things that don’t happen on their own’

Billionaire Tesla CEO Elon Musk believes death is critical to human progress. Death is "important," he said this week, because people rarely change their minds — "they just die." "If you live forever, we might become a very ossified society where new ideas cannot succeed," he said. When billionaire Elon...
ECONOMY・1 DAY AGO

Tesla CEO Elon Musk said there are "not enough people," which could threaten human civilization. "I think one of the biggest risks to civilization is the low birth rate and the rapidly declining birthrate," said the father of six at the Wall Street Journal's annual CEO Council. "And yet, so...
ECONOMY・1 DAY AGO
Cheddar News

Elon Musk confirmed via Twitter that Tesla's eventual first Cybertruck will be updated to include 4 motors, 4 wheel steering, and a crab mode — like some of its competitors. Andrew Hawkins, a transportation reporter for The Verge, joined Cheddar to talk about how the new Cybertruck positions Tesla in the EV space as more automakers make up ground on the industry leader. "I think that this is actually Tesla saying, hey, if this is what the market wants, then we better put our best foot forward and respond as best as we can," he said, noting companies like Rivian and Hummer have already touted these features.
CARS・2 DAYS AGO
Fortune

Subscribe to Fortune Daily to get essential business stories straight to your inbox each morning. Maybe it was today’s news that the Securities and Exchange Commission is investigating Tesla, but Elon Musk was in no mood on Monday to praise the federal government and its latest infrastructure spending plan. The...
U.S. POLITICS・1 DAY AGO
insideevs.com

If you follow Tesla and related news on social media, you may have been swamped with Elon Musk news and quotes yesterday. This is because the Tesla boss participated in an interview as part of the Wall Street Journal’s CEO Council Summit. While some Tesla fans urged Musk not to...
BUSINESS・1 DAY AGO

Elon Musk Is Selling Tesla Shares, But Buying More Than He Sells

According to a recent report by Teslarati, Tesla CEO Elon Musk now owns about 564,000 more Tesla stock shares than he did when he first started selling stock after his infamous Twitter survey. Wait, how is it possible to accumulate stock while selling so much?. Not long ago, Musk asked...
STOCKS・1 DAY AGO
SFist

The latest ‘Elon con’ involves a Twitter stunt where his followers supposedly made the decision for him to sell his Tesla shares. But Musk is actually on a buying spree, buying shares for “well below 1% of Tesla's current share price.”. The above image of Elon Musk sporting a Winston...
STOCKS・1 DAY AGO
Benzinga

A startup backed by hedge fund billionaire and New York Mets owner Steven Cohen plans to launch a stock exchange that would enable investors to trade in stocks such as Tesla Inc. (NASDAQ:TSLA) 24 hours a day, similar to the round-the-clock trading possible in cryptocurrencies like Bitcoin (CRYPTO: BTC) and Dogecoin (CRYPTO: DOGE).
STOCKS・2 DAYS AGO
The Independent

SpaceX boss Elon Musk has shared concept images of what a multi-rocket launch site will look like for its Mars-bound Starship craft.The next-generation rocket is set for its first orbital flight test early next year, which will see it launch from a new pad at the 39A complex at Kennedy Space Center in Florida, before touching down 90 minutes later off the coast of Hawaii.SpaceX eventually hopes to mass manufacture hundreds of Starship rockets and use them to transport people and cargo around the Solar System.This will require a quick turnaround for the reusable rockets, with multiple launches and landings...
AEROSPACE & DEFENSE・1 DAY AGO
The US Sun

A HI-TECH chip that's lodged into the brain could be implanted into a human for the first time next year, Elon Musk says. The billionaire's Neuralink firm has been working on a device that could allow those with physical disabilities to control a computer with their thoughts. But the Tesla...
ENGINEERING・1 DAY AGO
teslarati.com

Elon Musk may have sold over 10 million shares of electric vehicle maker Tesla (NASDAQ: TSLA) over the past month, but the CEO has actually increased his overall holdings in the company since the start of his massive selloff. To date, Musk owns about 564,000 more shares than he did since he started offloading some of his personal TSLA stock.
STOCKS・2 DAYS AGO
Business Insider

Elon Musk is CEO of four companies, but says he splits most of his time between Tesla and SpaceX. Musk said at The Wall Street Journal conference that his time is typically spent solving the "crisis of the moment." In the past, Musk has said he's worked as many as...
BUSINESS・1 DAY AGO