Former player of Doc Rivers: He 'set up' Ben Simmons 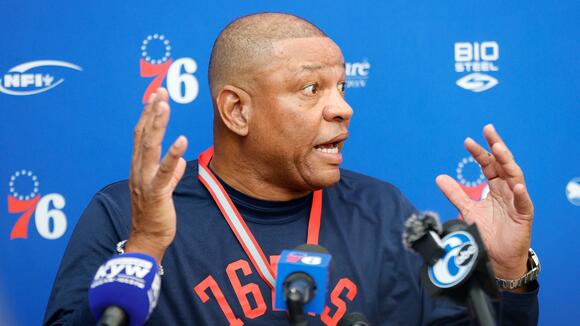 "Doc Rivers walked into today ready for the action. And it started from yesterday. If people think Doc Rivers didn't realize what Ben Simmons was doing yesterday, having a cell phone in his pocket, being lazy, just going through the motions when they had him on the floor, people are crazy," Perkins said Tuesday on ESPN . "I know Doc, and he set him up. He walked in and he saw that Ben wasn't engaged and so he called him in to get into a drill and Ben declined. He called him again to get into a drill and Doc was ready to throw him out. He lucky Doc Rivers didn't put that paws on him because I saw him almost put his hands on [Rajon] Rondo one time."

Perkins was asked to clarify what he meant by "set up."

"Well what I'm saying is, [Rivers] walked into practice saying, 'You know what, let me see what [Simmons'] body language is like today.' Because he let it ride yesterday and so today he just wasn't having it."

Simmons was kicked out of practice on Tuesday and suspended for the Sixers' season opener tonight. He was scheduled to address the media on Tuesday after practice, but because of the incident that did not happen.

Joel Embiid, after practice, was critical of Simmons saying that it is not his job to "babysit" and admitted that he has not spoken to Simmons since he returned to the team last week after months of requesting a trade.

Why is the coach the one everyone is sweating, iam not a fan of coach Rivers but his not the one being paid 200 million dollars to play. Simmons need to focus more on his career than balling instagram chicks.

The Philadelphia 76ers continue to deal with drama surrounding Ben Simmons and there does not appear to be an end in sight. Daryl Morey and the Sixers’ front-office have not changed their minds on the fact that they want an All-Star-level player for Simmons in a trade, but no team in the NBA has been willing to pay their price to this point.
NBA・13 DAYS AGO
The Spun

The Boston Celtics are reportedly interested in a major NBA trade, according to The Athletic. The Philadelphia 76ers continue to hold onto Ben Simmons, though the former No. 1 overall NBA Draft pick has yet to suit up in a game this season. Simmons is reportedly not mentally ready to...
NBA・22 DAYS AGO
fadeawayworld.net

In the NBA there is a lot of player movement. We see players switch teams relatively often, with them choosing new destinations for free agency, or perhaps getting traded by their franchise. In particular, star players enjoy a lot of mobility and freedom of movement, and we've seen many stars force their way out of franchises before.
NBA・26 DAYS AGO
NBA Analysis Network

The Philadelphia 76ers still a face a standoff with NBA All-Star Ben Simmons, who initially sought to be traded by the organization prior to the start of the 2021-22 season. Neither side has caved in and we are over a quarter of the regular season through and Simmons still finds himself not being part of the team in a regular capacity. Meanwhile, there hasn’t been much for meaningful developments on the trade front for the 76ers.
NBA・2 DAYS AGO

The Philadelphia 76ers are taking their own sweet time dragging their feet on any potential Ben Simmons trade. While it’s
NBA・11 DAYS AGO
fadeawayworld.net

NBA Rumors: Damian Lillard, James Harden And Bradley Beal Headline List Of 30 Players That Could Be Swapped For Ben Simmons

The Philadelphia 76ers-Ben Simmons situation continues as this article is being written. The player entered a tumultuous period after the Atlanta Hawks eliminated the Sixers in the second round of the 2021 NBA playoffs, with Ben getting a lot of criticism for his displays during that series. After that, the...
NBA・12 DAYS AGO
fadeawayworld.net

Ben Simmons Is Apparently Broke And Has Serious Cash Flow Issues: "He Spent So Much Money… He Buys A New Car Every Month."

Philadelphia 76ers star Ben Simmons has already seen his share of ups and downs in his short NBA career. After being one of the fan favorites, he turned them against him when he demanded a trade. Moreover, the way he has reacted since is simply unacceptable. He is yet to...
NBA・4 DAYS AGO
libertyballers.com

Report: There are 30 players who would satisfy Sixers in potential Ben Simmons trade

In the latest Ben Simmons update from The Athletic’s Sam Amick, we’ve received one particularly interesting nugget of information regarding the number of players the Sixers would be happy to receive in a Simmons trade. After mentioning obvious stars we’ve already been talking about for months such as Damian Lillard,...
NBA・12 DAYS AGO

Bookmark. Save. Do your thing. We will be providing constant updates on this page as it relates to the biggest
NBA・1 DAY AGO
fadeawayworld.net

Dwight Howard On What He'd Do If He Was Ben Simmons: "I Would Have To Be A Professional First And Do My Job. To The Best Of My Ability. But He Probably Just Wants A Fresh Start."

The Ben Simmons saga didn't have major updates until yesterday when reports suggested the player could be returning to the Philadelphia 76ers soon. Cash flow issues could prompt the Australian point guard to backtrack and come back to the team. Meanwhile, one of Ben's best friends talked about his situation,...
NBA・5 DAYS AGO
NBA Analysis Network

The Philadelphia 76ers and NBA All-Star Ben Simmons have continued their standoff, as there has been very little movement on the situation. There is still no timetable for him to return to the team and play in games with them or for the organization to trade him. Simmons is currently...
NBA・12 DAYS AGO
USA TODAY Sports Media Group

Scotto: When I talk to other executives around the league about the situation with the Sixers, nobody feels sorry for Daryl Morey around the league. They think his asking price is way too high coming off the playoffs. Teams know Ben Simmons doesn’t want to be there. I’ve heard this from some executives, too, that when Joel Embiid was healthy and before their recent losing streak, this team was performing well without him. Some executives said to me it further lowered the trade value for Ben.
NBA・13 DAYS AGO

The True Deciding Point In The Ben Simmons Saga

For months now, the basketball community has been asking itself one question. What is going to happen between Ben Simmons and the Philadelphia 76ers?. Since the Sixers dropped game seven of the Eastern Conference semifinals to the Atlanta Hawks, things have been dicey between the team and one of their franchise cornerstones. Shortly after the loss, the national media began speculating if it was time for Philly to move on from the former number one pick.
NBA・6 DAYS AGO
USA TODAY Sports Media Group

Jon Johnson: Per source, Ben Simmons spent some time this afternoon at WFC for individual practice with handful of coaches, staff. Watching the Wolves close this games with a collection of PFs that are just sort of OK, makes me believe even more they are the team that should trade for Ben Simmons. – 8:37 PM.
NBA・3 DAYS AGO
94 WIP Sports Radio

76ers fans cheer Damian Lillard who says, 'I thought that was funny'

After the game, the 31-year-old six-time All-Star was asked about the love he received from the Philly fans. Lillard said while he got a kick out of it, he’s “10 toes in Rip City” and committed to Portland.
NBA・28 DAYS AGO
94 WIP Sports Radio

The Ben Simmons saga has been going on for months now, with both sides—the 76ers and Simmons—refusing to budge. Simmons wants out, but the Sixers do not want to accept 50 cents on the dollar.
NBA・25 DAYS AGO
crowrivermedia.com

T-Mac: Ben Simmons situation has blame on both sides

NBA legend Tracy McGrady chats to Andy Scholes about his pick for the NBA title this year, why the Ben Simmons situation has blame on both sides and who the best ball boy in Houston Rockets history is...
NBA・12 DAYS AGO
USA TODAY Sports Media Group

Sixers split on how to approach Ben Simmons situation?

Kyle Neubeck: On broadcast just now, @KristenLedlow just said feedback from people she talked to within Sixers is split on Simmons approach. One, she said, believes they should welcome him back and he makes them better. “Another tells me, ‘We got to cut the cord and move forward.'”. Source: Twitter...
NBA・13 DAYS AGO
libertyballers.com

An early-season check in on all of Ben Simmons suitors

We are now a few weeks into the 2021-22 NBA season and we’ve gotten a small taste of how teams are performing. The Sixers have been fun for the most part, as they’ve proven to be a team with a lot of talent and a young developing star in Tyrese Maxey. However, the large shadow that is the Ben Simmons situation continues to cast over the team.
NBA・13 DAYS AGO
Yardbarker

As the Philadelphia 76ers fight for wins on the basketball court, they continue to be engaged in an intense battle off the court. Since requesting a trade over the summer, Ben Simmons has refused to participate in team-related activities by pointing to mental health issues as the reason for his absence.
NBA・14 DAYS AGO