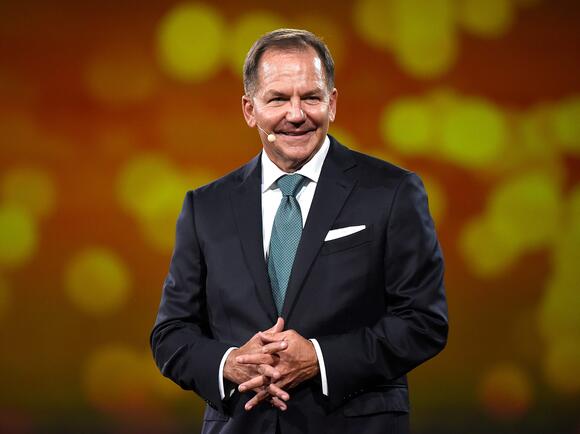 With US regulators approving the first bitcoin-linked exchange-traded fund, billionaire investor Paul Tudor Jones said the US will remain the top "economic power in the world."

Meanwhile, China, which has ramped up its crackdown on digital assets this year, is losing steam, he said.

"That place is on economically a slow boat to the South Pole," Jones, the founder and chief investment officer of Tudor Investment Corporation, told CNBC's Squawk Box Wednesday. "As long as the US can continue to unchain entrepreneurs, we're always going to be in the dominant position."

Jones said the US Securities and Exchange Commission's approval of the ProShares Bitcoin Strategy ETF , which invests in bitcoin futures contracts, should give investors "great comfort."

"We unleash our individual entrepreneurialism and creativity," Jones said on CNBC. "You're seeing China do the exact opposite."

China has long been working to rein in the burgeoning market for digital assets. In September, the country took its most aggressive action so far by banning all cryptocurrency-related transactions, causing bitcoin prices to tumble last month.

But prices have since recovered, with bitcoin breaching its all-time high $65,000 mark Wednesday as investors cheered the bitcoin-linked ETF approval. The currency traded as high as $66,104 at 10:04 a.m. in New York, CoinMarketCap data show. The ProShares ETF, which trades under the ticker BITO, has increased 8% since its launch on Tuesday.

"Crypto is here to stay," Jones said, adding that the world is becoming increasingly digitized. He told CNBC his firm has a small, single digits, position in cryptocurrencies. The digital asset is currently "winning the race" against gold, he added.

yea until China decides it wants what it can overwhelmingly take from the U.S. either by force or by economics.

All the so called 'reputable' people touting cryptocurrencies are holders of major positions and therefore nothing but shills. This guy Paul Tudor Jones will be financially ruined if cryptocurrencies tank. So, consider the source.

All the crypto experts have their assets in it. Of course they are going to be bullish on crypto.

U.S. and China Finally Agree on Something, and It's Not Good for Crypto Miners

Crypto miners require energy. A lot of energy. Regulators are starting to get on the same page regarding the consequences of crypto mining.
MARKETS・14 HOURS AGO
Business Insider

The biggest antenna on the planet is up and running in central China, opening up long-distance communications with submarines as well as civilian applications, according to engineers and scientists involved in the project. The exact location of the facility has not been revealed but is believed to be somewhere in...
CHINA・17 HOURS AGO
The Motley Fool

The discussion around energy usage is picking up for crypto miners, and Canaan is feeling the pain today.
STOCKS・16 HOURS AGO
Markets Insider

CNBC's Andrew Ross Sorkin asked Ray Dalio how he reconciled allegations of human-rights abuses against China with his investing style.
ECONOMY・1 DAY AGO

Chinese regulators are reportedly behind China-based ride-hailing company DiDi exiting from the New York Stock Exchange, just days after listing earlier this year. The regulators stated prior that DiDi had not received the necessary clearances to list in the states. Gordon Chang, Asian affairs expert, joined Cheddar to break down what the delisting says about the relationship between nations. "This really strikes me as an attempt to really to force a decoupling of China and the U.S. in the financial markets," Chang said.
ECONOMY・13 HOURS AGO
MarketWatch

U.S.-listed shares of Chinese companies, including Nio and Alibaba, tank in the wake of Didi Global's news it will delist its shares from the New York Stock Exchange.
BUSINESS・15 HOURS AGO
MarketWatch

The question for markets is less about when the Fed will hike and more about, how high.
BUSINESS・22 HOURS AGO
Markets Insider

'We recognize that our stakeholders have differing views on China - BlackRock takes those concerns seriously,' the company said in a statement.
ECONOMY・14 HOURS AGO

Nasdaq falls nearly 2% as US stocks battered by Omicron volatility

A weekly look at the most important moves and news in crypto and what's on the horizon in digital assets.
STOCKS・1 DAY AGO
Markets Insider

The S&P 500 is down almost 5% since the new Omicron coronavirus variant was identified. But investors should buy the dip because Omicron might hasten the pandemic's end, according to JPMorgan. "Omicron could be a catalyst for rotation from growth to value, selloff in COVID and lockdown beneficiaries and rally...
STOCKS・1 DAY AGO
editorials24.com

The current market is “even crazier than the dotcom era” and China made the right call when it banned cryptocurrencies, according to Warren Buffett’s right hand man Charlie Munger. “The dotcom boom was crazier on the valuations even than we have now but overall, I consider this era even crazier...
MARKETS・22 HOURS AGO
Markets Insider

US stocks rallied Friday despite a disappointing November jobs report. US nonfarm payrolls grew by 210,000 last month — way below the median forecast of 550,000 jobs. The weak data raised investor hopes for a slower pace of tapering from the Federal Reserve. Sign up here for our daily newsletter,...
STOCKS・19 HOURS AGO
MarketWatch

Even the most generous of valuation gauges shows the U.S. stock market is overvalued

The price-to-book ratio is higher, and therefore more bearish, than at almost any other time in recent decades.
STOCKS・22 HOURS AGO
The Motley Fool

Why Nio and Other Chinese EV Stocks Got Crushed Today

A combination of factors have these EV maker stocks getting hit extra hard today.
ECONOMY・15 HOURS AGO
Washington Post

Why China and U.S. Are Clashing Over Stock Listings

Chinese companies in need of capital have long headed to the U.S. stock market to tap deep-pocketed investors, raising more than $100 billion in first-time share sales over the past two decades. The money flow was profitable for company founders, bankers, early investors and new shareholders. All this has changed due to actions by both countries. Ride-hailing giant Didi Global Inc. said it would withdraw from U.S. stock exchanges, a stunning reversal as it yielded to demands from Chinese regulators.
MARKETS・23 HOURS AGO
MarketWatch

Veteran trader Mark D. Cook, who passed away recently, closely monitored the market's health and was convinced that U.S. stocks are due for a major hit.
STOCKS・1 DAY AGO
theedgemarkets.com

After calling China’s crackdown, this fund is going big on solar

(Dec 4): One of the few funds to predict Beijing’s clampdown on education companies is doubling down on its bets on China’s solar companies. Ken Xu, Hong Kong-based chief investment officer at Strategic Vision Investment Ltd, withdrew from tutoring stocks in March after noting that state-backed media outlets and policy makers were echoing angst among parents about the societal impact of the industry.
ECONOMY・8 HOURS AGO
Markets Insider

India won't ban private cryptocurrencies, but will regulate them instead: NDTV report

India looks set to regulate crypto trading, rather than slap an outright ban on digital currencies as feared. People should declare their crypto assets and put them on an exchange, the government suggested, according to an NDTV report. The market regulator should then oversee those exchanges, with prison time and...
ECONOMY・18 HOURS AGO