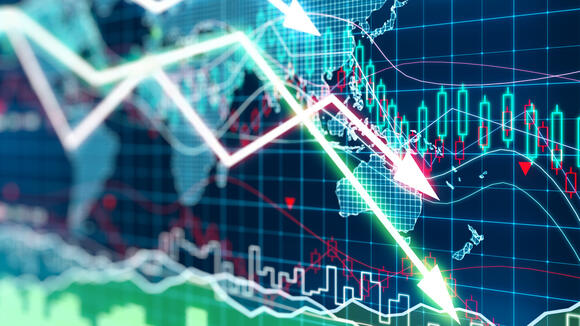 Scott Minerd, global chief investment officer for financial firm Guggenheim, predicts that the stock market could drop 15% by November, according to a report by Business Insider. He blames the economic stimulus , noting that the central banks have “no exit plan.”

“For the time being, we’re just addicted to this,” he said earlier this week at the Milken Institute’s 2021 Global Conference. He explained that the central banks have lent $2.3 trillion in much-needed support for local businesses, households, financial markets and state and local governments during the pandemic. However, now the central banks are in the position of “running the markets,” he said, without a clear exit strategy to withdraw stimulus.

There’s also the concern of inflation, BusinessInsider.com writes. Michael Burry of The Big Short, along with investment experts Leon Cooperman and Carl Icahn have also warned against the Fed overstimulating the economy.

The Fed is likely to begin tapering bond purchases in December, according to BusinessInsider.com. A formal announcement may come at November’s Federal Open Markets Committee meeting.

Biden’s stimulus package has also been blamed for rapid inflation in 2021, with a tight labor market, an increase in demand for goods and services as lockdowns ended, and supply chain challenges creating “the perfect storm for inflation,” GOBankingRates reported last month .

The Dow Jones Industrial Average opened up slightly this morning, hovering just past the $35,550 mark, less than 100 points shy of its 52-week high. The market was bolstered by Apple, Tesla, and the new Bitcoin futures ETF .

This article originally appeared on GOBankingRates.com : Stimulus Money Could Cause the Stock Market to Plunge 15% by November

Here’s How Stimulus Money Changed Everything in 2021

The $1.9 trillion American Rescue Plan represented one of the greatest transfers of wealth in history. The legislation provided $1 trillion for programs administered by the Treasury, $700 billion of...
BUSINESS・1 DAY AGO
GOBankingRates

As the U.S. Centers for Disease Control and Prevention announced the first confirmed case of the Omicron variant in the U.S. on Wednesday, Dec. 1, the Dow Jones Industrial Average dipped by more than...
STOCKS・7 HOURS AGO
GOBankingRates

Stimulus Checks Totaled Over $850 Billion: See How That Money Was Spread Out

(Kitco News) This will be a "decade of shortage" defined by high inflation and a failed attempt to raise rates – the perfect combo to trigger a massive rally in gold, said Goehring & Rozencwajg Associates managing partner Leigh Goehring. Next year, inflation could already be pushing 9%, and it...
BUSINESS・1 DAY AGO

Amid a historic stock market rally, millions of Americans have been buying and trading stocks. But at least one key market indicator suggests the party may not last. A widely followed gauge of what Wall Street calls “investor complacency” has been flashing a warning sign since early November. The CBOE equity put-call ratio measures the number of bearish to bullish stock market bets on the options market. The lower the number, the more optimistic investors are.
STOCKS・10 HOURS AGO
The Motley Fool

All three should be surefire winners over the long term.
STOCKS・15 HOURS AGO
The Motley Fool

Technology stocks can offer high-growth returns, but it's important to take a long-term view to filter out short-term market noise.
STOCKS・1 DAY AGO
The Motley Fool

COVID-19 fears are back to haunt the market, and that's good news for gold. At this point, one gold stock is making a massive growth move. Another has growth in-built into its business model, but it's still trading cheap. You’re reading a free article with opinions that may differ from...
BUSINESS・1 DAY AGO

Legendary investor Ray Dalio has warned people against trying to time the market as uncertainty about the Omicron coronavirus variant shakes stocks. Dalio told CNBC on Tuesday that the most important thing for investors is to be in a safe, well-balanced portfolio and to not try to be too smart.
STOCKS・1 DAY AGO
CNBC

CNBC's Jim Cramer said Wednesday investors should start to nibble on some beaten-down stocks now that the first case of the Covid omicron variant has been detected in the U.S. "For days I've told you we were waiting for the other shoe to drop and it just hit today," the "Mad Money" host said.
STOCKS・1 DAY AGO
The Motley Fool

A patent dispute could pressure the vaccine maker's profits.
STOCKS・1 DAY AGO

How Low Will Stocks Go?

Just as we were celebrating new highs stocks (SPY) got set back in a big way by the news of the Omicron variant. No doubt we are all contemplating how low stocks can go on this news and what is the best trading plan for the days and weeks ahead. That is the focus of this week’s market commentary below.
STOCKS・1 DAY AGO
MarketWatch

Veteran trader Mark D. Cook, who passed away recently, closely monitored the market's health and was convinced that U.S. stocks are due for a major hit.
STOCKS・3 HOURS AGO
The Motley Fool

The VIX could stay elevated into the holiday season.
STOCKS・11 HOURS AGO
Motley Fool

Zoom Stock Plunged. Is This a Buying Opportunity?

Not every dip is a buying opportunity. You'll need to consider if the sell-off is short-term-oriented. If your thesis is still intact, it could be a good chance to buy shares. Zoom Video Communications (NASDAQ:ZM) tumbled after its recent earnings report, and the stock now trades at a steep discount to its previous heights, despite solid growth and monster profits.
STOCKS・10 HOURS AGO
The Motley Fool

3 Surefire REITs to Buy If the Market Crashes

Stock market crashes can be an excellent opportunity to buy quality REITs at a discount.
STOCKS・1 DAY AGO
MarketWatch

DocuSign stock plunged after its October-quarter earnings and revenue topped Wall Street targets but revenue guidance for DOCU stock missed expectations. San Francisco-based DocuSign (DOCU) reported third-quarter earnings after the market close on Thursday. Demand for its products surged during the early part of the coronavirus outbreak but many businesses are resuming in-person meetings.
STOCKS・4 HOURS AGO