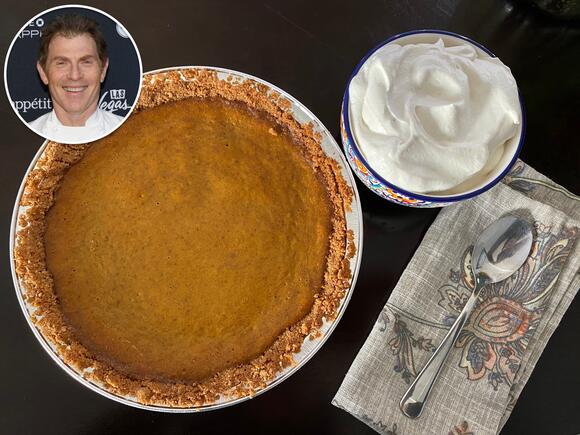 When put head to head with other celebrity chefs' takes on the seasonal dessert , Bobby Flay's "Throwdown Pumpkin Pie" blew me away with its graham-cracker crust, flavorful filling, and bourbon-maple whipped cream.

Read on to find out how to make this dessert and my final thoughts.

The ingredients were pretty standard, except the surprise addition of bourbon-maple whipped cream

Flay's recipe is a no-fuss option for people who love a homemade dessert but don't want to spend a full day making a flaky pie crust, as it opts for a delicious graham-cracker base instead.

But this dish wouldn't be complete without the flavorful whipped cream made with just heavy whipping cream, maple syrup, vanilla-bean seeds, and bourbon. The recipe calls for Grade B maple syrup , but that's no longer an existing classification, so I used a dark Grade A one instead.

I measured out all of the ingredients and organized them in groups for the crust, filling, and whipped cream, which made following this recipe quite simple.

Although the recipe calls for a food processor, I didn't have one when I first made this dish but was able to use a mallet to crush the graham crackers.

I then combined the crumbs with butter, sugar, and cinnamon in a small blender.

I firmly pressed the graham-cracker mixture into a pie tin and baked the crust for 10 minutes at 350 degrees Fahrenheit to let it set.

Making the filling was a simple process

Once the pie crust had been prebaked, I set the oven to 275 degrees Fahrenheit and got to work on the filling.

I started by whisking the eggs and sugar together before adding in the pumpkin, cream, salt, vanilla, spices, and sugars.

Once I had the creamy, orange filling ready to go, I strained it and poured the result into the cooled pie crust.

I had far more filling than I needed for one pie, so I froze the rest for future desserts .

While the pie baked, I threw together the whipped cream

The pie baked for about an hour and a half, and toward the end of that time, I combined heavy whipping cream , bourbon, vanilla-bean seeds, and maple syrup in a stand mixer to make the whipped cream .

Once the pie cooled, I plated a slice with some whipped cream on the side, though my subsequent servings featured heaps of it on top.

The pie and whipped cream went perfectly together

The whipped cream balanced the pumpkin flavor and spices and was tasty on its own thanks to the maple syrup, bourbon, and vanilla.

The pie itself had a great texture. Although the bottom was slightly too soggy, it still held together well. Plus the dish maintained a good height and sported crispy edges.

I wish the crust was just as tasty as the filling and whipped cream, though. In the future, I plan to add more sugar and cinnamon to the graham-cracker mix to boost the flavor.

All in all, this dessert turned out delicious and was surprisingly easy for a homemade pie.

Today, Thanksgiving tables typically feature side dishes like mashed potatoes and mac and cheese. Once-popular options like Jell-O salads and hot Dr. Pepper are no longer part of the celebrations. However, some people still like to make dishes like ambrosia salad for nostalgia's sake. Thanksgiving celebrations revolve around food, but...
RECIPES・9 DAYS AGO
Quick Country 96.5

Last week, I shared my family's scrumptious wild rice stuffing recipe, and it seemed to make people eager for the Thanksgiving season. And now, with Thanksgiving only two weeks away, I decided to grace you, the readers, with another Shel B Thanksgiving staple. Say bye, bye, pumpkin pie, and hello,...
FOOD & DRINKS・14 DAYS AGO
theonlineclarion.com

In search of the perfect pumpkin pie

Pumpkin pie is the most delicious way to wrap up a Thanksgiving feast. And this year holds big promise as the world recovers from COVID – 19. Last year, during lockdown, my Thanksgiving consisted of Sloppy Joes made from ground turkey. So, this year I want something special. I tried...
RECIPES・10 DAYS AGO
Texoma's Homepage

Unique dishes to spice up your Thanksgiving dinner

Celebrate the holidays with these recipes courtesy of New York Times Cooking, specially chosen for "Sunday Morning" viewers. We are pleased to share Melissa Clark's Ultimate Pumpkin Pie. Did you know that the variety of pumpkin used in canned pumpkin purée is very close to sweet winter squashes like butternut...
RECIPES・14 DAYS AGO
Newsweek

13 Pumpkin Pie Recipes to Give Thanks for: From Traditional to Gluten Free

These delicious pumpkin pie recipes may just be too delicious to save just for Thanksgiving.
RECIPES・10 DAYS AGO
Ok Magazine

Although you could buy pumpkin purée any time of the year, this orange fruit really shines during the fall season. And, no, we’re not just referring to pumpkin spice lattes (although those are kind of a big deal). From jack-o-lanterns to pumpkin bread, there are so many ways to use pumpkins during autumn.
FOOD & DRINKS・14 DAYS AGO

Editor’s Note: This column originally appeared in the Nov. 18, 2020 edition of the Times Herald. Several readers have requested the recipe so I thought I’d share again. Enjoy. For as long as I can remember, every fall my Mom cooks pumpkins we raise on the farm for pies. These...
RECIPES・12 DAYS AGO
Insider

Pumpkin pie is a staple dessert for many people on Thanksgiving. However, there are many other delicious desserts that are sure to please your guests. Baked apples with vanilla ice cream and chocolate cream pie are both easy and delicious desserts. Chocolate-chip pumpkin bread is a delicious dessert that will...
RECIPES・14 DAYS AGO
thefullhelping.com

There’s nothing I love better than a slice of classic vegan pumpkin pie during the holiday season. This version uses cashews for an ultra-creamy consistency and features a traditional, flaky vegan pie crust. I have very positive feelings about pie. I like apple, cherry, pecan, blueberry, peach, chocolate mousse, key...
RECIPES・13 DAYS AGO
NBC Connecticut

In the game of Thanksgiving desserts, everyone’s a winner. Whether you’re a pie-or-bust baker or want to mix things up with a pumpkin cheesecake, News4’s Megan McGrath has the recipe for you. Pumpkin Cheesecake Recipe. 2 sleeves graham crackers, ground. 1 stick butter, melted. 1 1/4 cup sugar, plus 4...
RECIPES・12 DAYS AGO

I made 3 pecan pies using recipes from celebrity chefs, and I'd combine 2 of them for a perfect slice

I tried recipes for pecan pie from celebrity chefs Ree Drummond, Guy Fieri, and Ina Garten. Fieri's recipe used a store-bought crust, but Garten's crust recipe was amazing. Drummond's homemade sweet pecan pie was the tastiest, and I'd definitely make it again. There's something so comforting about a slice of...
RECIPES・13 DAYS AGO
Alabama NewsCenter

Pumpkin pie always sweeps into the holiday season as a leading contender for top dessert. What’s surprising is that its fan base goes beyond the old-fashioned crowd. On TikTok, pumpkin-based classics dominate the rankings, making up 50% of the site’s 10 most popular food and drink trends. The favorite hashtag, #pumpkinpie, has garnered more than 140 million views.
RECIPES・11 DAYS AGO
Fox News

Who among us can resist a plate of warm, delicious pasta topped with freshly grated cheese — and served up in the festive spirit of the Christmas holidays (along with a heap of love, laughter, gratitude, and good wishes)?. OK, time to dish!. Tucked into the new book All American...
RECIPES・23 HOURS AGO
92.9 THE LAKE

Easy Recipe: How to Make a Tasty Fireball Pumpkin Pie

Keep in mind this recipe is not for those who gag when they smell fireball. I actually have made this recipe and it comes out tasting more of like a very cinnamony (is that even a word?) flavor. This is a fun recipe to share with your boozy friends and...
RECIPES・11 DAYS AGO
theleangreenbean.com

25+ Pumpkin Dessert Recipes {That Are Not Pumpkin Pie}

Looking for easy dessert pumpkin recipes that are not pumpkin pie? Here are 25+ desserts from pumpkin cake to pumpkin bars to no-bake pumpkin desserts to choose from!. When you think of pumpkin recipes easy dessert is probably the first thing that comes to mind, right? Obviously, pumpkin pie is a classic dessert recipe. However, if you’re like me, you may not get all that excited about pumpkin pie. I think it’s just average.
RECIPES・11 DAYS AGO
30Seconds

The word mincemeat may make you crinkle your nose, but it's simply a mixture of chopped dried fruit, nuts and alcohol, usually brandy or rum. But yes, older recipes did container beef suet, beef or even venison. The mincemeat pie has English origins and is traditionally served during the Thanksgiving and Christmas season.
RECIPES・13 DAYS AGO
99.9 KTDY

Bobby Flay Will Stay at the Food Network

Bobby Flay is staying on the Food Network!
TV & VIDEOS・11 DAYS AGO
mediafeed.org

Forget pumpkin pie. This recipe is soooo much better

This delicious Kabocha pie will be your new favorite holiday-table dessert. It’s absolutely perfect for dessert after Thanksgiving Dinner!. Hear me out. I learned this little gem in culinary school from my pastry chef teacher. Kabocha squash makes better pumpkin pie than pumpkin does. I swear it’s true. It makes an absolutely perfect dessert for any fall or winter holiday.
RECIPES・13 DAYS AGO