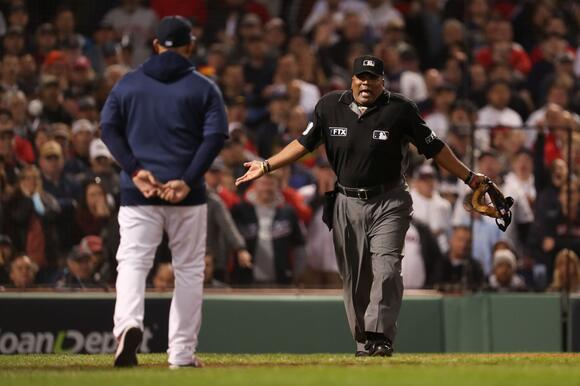 How did the Red Sox land with their Game 4 debacle Tuesday night? There were plenty of reasons.

Start with the team's vaunted offense, which managed just two runs on three hits heading into the ninth inning, not having scored a run since Xander Bogaerts' two-run homer in the first.

Go to the poor execution by a couple of key Red Sox relievers. First it was Garrett Whitlock letting the Astros tie things up with a leadoff homer in the eighth inning by Jose Altuve, and then Nathan Eovaldi allowed the difference-making two-run single from Jason Castro in what would turn into a seven-run frame.

But even though all of that is very real, it doesn't make the sting of Laz Diaz any less painful.

The home plate umpire had a horrific evening in what would ultimately be an Astros 9-2 win, tying the best-of-seven American League Championship Series up at 2-2.

According to ESPN Stats and Info, Diaz missed 21 calls. Twenty-one! But there was one, in particular, which Red Sox followers will - and should - highlight above all others. That was the backdoor curveball thrown by Eovaldi to Castro with two outs in the ninth, two runners on, the game tied and the count 1-2.

"Yeah, I thought it was a strike, but, again, I'm in the moment," Eovaldi said. "I'm trying to make my pitches. I'm attacking the zone. I mean, he came in the ninth inning. I gave up a double to (Carlos) Correa, and I tried to go to work there and tried to get some outs, and prevent him from scoring. I had two strikeouts, and then facing Castro I felt like I was in control of the at-bat. I felt like I made a good pitch on the outside corner, and it didn't go my way, but I got to come back and I got to answer back and make another good pitch. I threw a fastball, and he fouled it off, and I went with the splitter. I had a good feel for it tonight, and he put a good swing on it and got a base hit."

"I got to take a look," said Red Sox manager Alex Cora of the pivotal pitch. "Yeah. A lot of people thought it was a strike."

One earlier in the game that Cora didn't have to take another look at was a called third strike to J.D. Martinez in the third inning with a runner on second. That pitch was one that everyone from the hitter, to his dugout and even perhaps Houston catcher Martin Maldonado believed was a miss by Diaz.

"I got to take a look at the video and see how it went," said Cora of the ninth-inning Eovaldi pitch. "I haven't had a chance to take a look at it. Like I said, I really disagreed with the one early on. It was the third inning, and 3-2 count. J.D. is very -- he doesn't argue too much, and the way he reacted, you know, I had to jump right away. I don't want him to get thrown out.

"We disagreed with that one, so I know it's early in the game, but it's first and second one out. It is what it is. It's a tough job. I know Laz since our days in Miami, you know? He used to cover our games when I played at the University of Miami. Every Friday he was the man in those games, so it's a hard job. I understand that. It's a hard job."

Amid trade rumors, disgruntled Celtics guard Payton Pritchard made some interesting comments on a recent podcast appearance, expressing his desire for a larger role elsewhere.
BOSTON, MA・2 HOURS AGO
Audacy

The NBA admitted they were wrong to not call a foul on Celtics forward Jayson Tatum on LeBron James’ driving layup at the end of regulation Saturday night, describing the blunder as a “gut-wrenching” mistake.
BOSTON, MA・7 HOURS AGO
Audacy

Fillipponi blasts Garoppolo for laughing during QB disaster: 'What an a–hole that guy is'

Cameras caught Jimmy Garoppolo smiling as the 49ers figured out what to do at quarterback with Brock Purdy and Josh Johnson both hurt. Andrew Fillipponi blasted Garoppolo for that on “1st & Pod.”
SAN FRANCISCO, CA・8 HOURS AGO
Audacy

The Rangers are facing backlash from a statement released Saturday in response to the team’s deciding, without explanation, not to wear rainbow jerseys as part of their annual “Pride Night” festivities at Madison Square Garden.
NEW YORK CITY, NY・1 DAY AGO