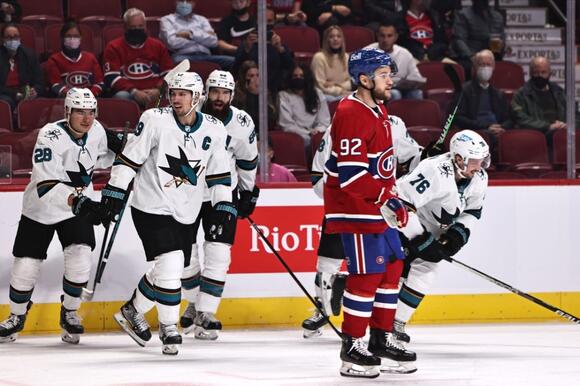 Rookie Jonathan Dahlen scored his first two NHL goals and drew a penalty that led to a power-play tally as the San Jose Sharks defeated the host Montreal Canadiens 5-0 on Tuesday night.

Goaltender Adin Hill made 21 saves to post his first shutout with the Sharks since being acquired in an offseason trade with Arizona.

Timo Meier and Erik Karlsson each added a goal and two assists as the Sharks won for the 10th consecutive time against the Canadiens. Kevin Labanc also scored and Logan Couture had two assists.

The Canadiens, who reached the Stanley Cup Final last season, have lost their first four games of this campaign and been outscored 15-3. That’s their worst start to a season since they lost five in a row in 1995-96.

The first came 1:22 into the game. Brent Burns’ slap shot was tipped in the high slot by Meier, then Dahlen got a stick on it at the top of the crease to beat Allen.

The Sharks made it 2-0 just over two minutes later as Dahlen converted a rebound of a shot by Logan Couture on a 2-on-1 break. 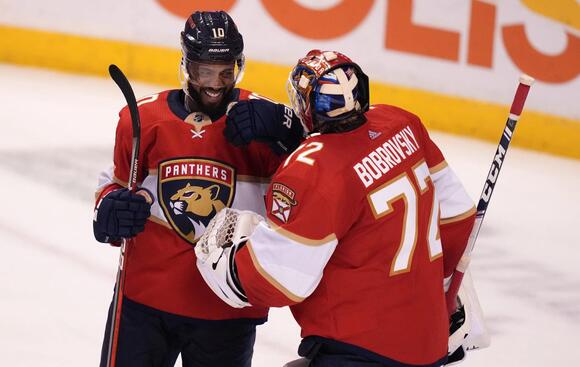 Karlsson scored on a shot from the point that deflected off the skate of Canadiens defenseman David Savard and past Allen at 19:22 of the first to give the Sharks a 3-0 lead.

Dahlen drew a slashing call on Montreal rookie Cole Caufield early in the second period and the Sharks converted on the ensuing man advantage, as Meier scored at 3:09 on a wrist shot from the left faceoff circle past a screened Allen.

Labanc capped the scoring with a power-play goal at 14:31 of the third.

The Sharks were without forward Evander Kane, suspended 21 games Monday for violating the league’s COVID-19 protocols.

Alex Ovechkin and Conor Sheary each scored two goals to lead the Washington Capitals over the San Jose Sharks 4-0 on Saturday night. Ilya Samsonov turned back 22 shots for his second straight shutout as the Capitals won for the sixth time in a seven-game point streak. Samsonov was playing in consecutive games for the first time this season.
NHL・14 DAYS AGO
Sportsnaut

SAN JOSE – The Carolina Hurricanes were not giving the San Jose Sharks a lot of room to operate in their own zone in the first two periods of Monday’s game at SAP Center, hounding the puck on the forecheck at every opportunity. That didn’t necessarily change the way the...
NHL・12 DAYS AGO

Five takeaways from the Carolina Hurricanes’ 2-1 overtime loss Monday to the San Jose Sharks, won on a goal by Alexander Barabanov at 1:42 of OT:. ▪ Not every game is up and down and glorious scoring plays. Some are 60 minutes of grind and grit and putting body on body and blocking shots. And then deciding the game in overtime.
NHL・12 DAYS AGO
Yardbarker

In this edition of San Jose Sharks News & Rumors: Evander Kane is again in the headlines, this time for accusing his ex-wife of faking her pregnancy and asking a judge to give her a mental exam. His suspension is set to end soon, and management is reportedly doing the best they can to trade him before his return. Meanwhile, Jonathan Dahlen is dealing with an arm injury, though it doesn’t appear to be major. Finally, Kevin Labanc was suspended by the NHL’s Department of Player Safety (DoPS) for one game for slew-footing.
NHL・9 DAYS AGO
Daily Republic

Sharks’ Dahlen out for game against Senators

SAN JOSE — Forward Jonathan Dahlen will miss his second straight game Wednesday with an upper-body injury and could be out for the remainder of the Sharks’ homestand. Dahlen was hurt in Saturday’s game at SAP Center with the Washington Capitals and missed the Sharks’ 2-1 overtime win over the Carolina Hurricanes on Monday. He will not play against the Ottawa Senators on Wednesday and is questionable for Friday when the Sharks play the Toronto Maple Leafs on the final date of a four-game homestand.
NHL・10 DAYS AGO

With Evander Kane’s twenty-one game suspension coming to an end on November 30th, the San Jose Sharks have let teams know he is available to be traded. Elliotte Friedman was on the Jeff Marek radio show on The Fan 590 and stated, “One of the things that I have heard is that the Sharks have let it be known that if somebody is interested, they would retain salary, if a deal could be worked out”.
NHL・8 DAYS AGO
NBC Bay Area

Report: Sharks placing suspended Kane on waivers Sunday originally appeared on NBC Sports Bayarea. Evander Kane's tenure with the Sharks could be coming to an end, as he is being waived by the organization on Sunday, the organization told reporters Sunday. The San Jose Mercury News' Curtis Pashelka first reported...
NHL・6 DAYS AGO
Sports Illustrated

The Sharks travel to Chicago to take on the Blackhawks in search of a victory after dropping three of their last five games. That includes their last game against Toronto, which dominated in every facet of the game as the Sharks lost 4–1. How to Watch San Jose Sharks at...
NHL・6 DAYS AGO
elitesportsny.com

The Devils begin their road-trip on Tuesday against a competitive Sharks team. The New Jersey Devils begin a new week with some significant news. Center Jack Hughes will return to the lineup after missing 17 games on Tuesday night… and he signed an eight-year, $64 million extension Tuesday afternoon. The...
NHL・4 DAYS AGO

Valeri Nichushkin had a goal and an assist, Cale Makar, Gabriel Landeskog and Andre Burakovsky also scored, and the visiting
NHL・2 DAYS AGO
NHL

Kunin gets two points on 24th birthday; Caufield has two assists for Montreal. Filip Forsberg loses his stick, but picks it up in time to slot home the game-winning goal with a quick chip shot in overtime. 00:44 •. Filip Forsberg scored with 12 seconds left in overtime to give...
NHL・3 HOURS AGO

Montreal Canadiens prospects are off to a tremendous start in the QMJHL. Three of them, Riley Kidney, Joshua Roy and Xavier Simoneau are in the top ten in league scoring this season. All three of these young players were drafted in the 2021 NHL Draft. While Simoneau is a 20...
NHL・14 DAYS AGO
froggyweb.com

Ryan Poehling scored twice in a 37-second span as the host Montreal Canadiens overcame Matt Duchene’s hat trick in a 6-3 victory over the Nashville Predators on Saturday. Tyler Toffoli collected a goal and two assists, Artturi Lehkonen had one of each and Christian Dvorak and Brendan Gallagher also tallied as the Canadiens halted a four-game losing skid (0-3-1).
NHL・14 DAYS AGO
leadertimes.com

Blueger has 2 goals to back Jarry, Penguins blank Canadiens

Montreal Canadiens prospect Jan Mysak was taken in the second round of the 2020 NHL Draft. He was a relatively unknown commodity on this side of the Atlantic, playing his entire career in Czech Republic before finishing the 2019-20 season with the Hamilton Bulldogs of the OHL. Mysak did score...
NHL・11 DAYS AGO