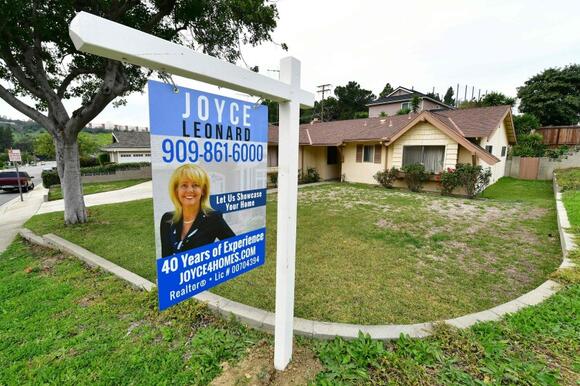 Southern California home prices set another record last month, but the market is cooling despite the all-time price high.

The region's six-county median sales price — the point at which half the homes sold for more and half for less — climbed 1.3% from August to $688,500 in September, according to data released Wednesday from real estate firm DQNews.

Although that's a record number and up 12.9% from a year earlier, the annual price appreciation was the smallest since January . The number of homes sold was essentially flat, rising just 0.6% from September 2020.

Heath Clendenning, an L.A.-area agent at Highland Premiere Real Estate, said that though the market isn't quite as hot as earlier this year, it's still decidedly a seller's market and multiple offers are common.

“People were buying homes sight unseen,” he said. “People are at least seeing the homes now for the most part.”

The white-hot market of spring and early summer stemmed from rock-bottom mortgage rates and a desire for more space during the pandemic, as well as millennials who are increasingly looking to buy their first homes.

But lately, some buyers have put off their home searches, burnt out after constantly ending up on the losing end of bidding wars, according to agents. Economists have also been anticipating lower price appreciation, because incomes haven't risen enough to continue to support price increases at the 20% levels seen earlier this year.

The slight rise in home sales last month was also the lowest figure since sales fell in June 2020.

In some corners of the Southland, sales fell compared with a year earlier, though prices rose in all counties.

Although home prices are at an all-time high, in some ways homes are more affordable to a larger group of people than during the bubble years preceding the Great Recession. That's because mortgage rates have plunged to historic lows, and incomes have risen as well.

Ed Pinto, director of the American Enterprise Institute’s Housing Center, recently told The Times that if mortgage rates rise to 4.5%, which they did in 2018, prices probably would decline 10% to 15% in L.A. County, because people simply couldn't afford what they've been paying.

According to Freddie Mac, the average rate on a 30-year fixed-rate mortgage was 3.05% last week. Green of USC said he doesn't think rates will change that much going forward and thus expects prices to remain "kind of flat for a while."

His prediction is in line with a forecast from real estate firm CoreLogic, which expects that in August 2022, home prices will have risen 1.6% from a year earlier.

A lot more of the dynamics seen in 2021 — but at a much less frenzied pace — is expected to be on tap for next year’s housing market. Redfin Corp. (NASDAQ: RDFN), Zillow Group Inc. (NASDAQ: ZG), Realtor.com and the National Association of Realtors, among others, have released their forecasts for the 2022 U.S. housing market, with similar themes, although some variations, among each source.
REAL ESTATE・1 DAY AGO
money.com

After increasing for 14 straight months, home price growth finally slowed in September. The latest CoreLogic Case-Shiller Home Price Index released Tuesday shows home prices increased 19.5% between September 2020 and September 2021. That's down from a record 19.8% year-over-year increase in August. To be sure, even as there are...
BUSINESS・1 DAY AGO
Entrepreneur

Price growth slowed a skosh and inventory ticked up slightly across the nation’s biggest metros in the third quarter. And while many potential first-time buyers have found their savings bolstered…
REAL ESTATE・7 HOURS AGO
GOBankingRates

Anyone in the market for a new house should have a slightly better shot at finding one next year as the supply of new homes inches closer to demand, but you can still expect historically high prices...
REAL ESTATE・1 DAY AGO

Home prices rose in September, but at a slower pace than in August.
REAL ESTATE・6 HOURS AGO
GOBankingRates

Home prices rose by nearly 20% over the last year, an astonishing rate of growth that was faster and more intense than even the run-up to the housing crash of 2008, according to Fortune -- and that...
REAL ESTATE・2 DAYS AGO
ABC 10 News KGTV

In the virtual conference, industry professionals touched on hot topics such as the lack of housing inventory and labor shortages that are putting a dent in home construction.
SAN DIEGO, CA・1 DAY AGO
GOBankingRates

No doubt about it -- the real estate market has been white hot in 2021. But if you didn't make a move this year, and you're thinking about buying or selling -- or both -- next year, you'll want to...
REAL ESTATE・3 DAYS AGO

Subscribe to Fortune Daily to get essential business stories straight to your inbox each morning. A perfect storm. That's the best way to describe the red-hot housing market we've seen from coast-to-coast during the pandemic. It was spurred by a combination of recession-induced low mortgage rates, remote work allowing buyers to sprawl further away from their workplace, and a demographic wave of first-time millennial homebuyers entering into the market. Of course, years of under-building means there simply aren't enough homes available to meet this demand. Cue record price growth.
BUSINESS・3 DAYS AGO
realtybiznews.com

Real estate experts believe the housing market could be unseasonably hot this winter, with above-normal levels of home buying activity. Lawrence Yun, chief economist of the National Association of Realtors, said he fully expects sales activity this winter to be stronger than compared to past years. “This winter there will be more sales compared to pre-pandemic winters going back all the way to 2006,” he told realtor.com.
REAL ESTATE・4 DAYS AGO
Wicked Local

The median sales price for a single-family home in Barnstable County during July was $559,500. That's an increase of 18.5% compared with July 2020, according to data from Realtor.com. The number of houses sold fell by 31.6% from a year earlier. A total of 406 houses were sold county-wide during...
BARNSTABLE COUNTY, MA・6 DAYS AGO
Newsweek

Builders began construction on 16,000 single-family homes slated to become rentals in the third quarter, the highest quarterly total since at least 1990.
REAL ESTATE・7 DAYS AGO

Affordability constraints in the still-competitive real-estate market are making it harder for first-time home buyers to lock in deals.
REAL ESTATE・10 HOURS AGO
SmartAsset

The Federal Reserve says that Generation X currently holds 41.5% of home mortgages in the second quarter of 2021, followed by baby boomers with 27.3% and then millennials with 26.7%. However, a new study from Realtor.com forecasts a generational shift with more … Continue reading → The post Can Millennials Take Over a Tough Housing Market in 2022? appeared first on SmartAsset Blog.
REAL ESTATE・6 HOURS AGO
ABC Action News WFTS

A hot market and retirees price people out of Sarasota

"I think it would be more appropriate to say what's the blame, rather than who's to blame, and it's the market that is to blame."
SARASOTA COUNTY, FL・1 DAY AGO
The Motley Fool

Here's what mortgage rates look like now. Is it a good time to apply for a home loan?
REAL ESTATE・7 HOURS AGO
Billboard

As the pandemic reached North America in early 2020, the regional Mexican band Grupo Firme faced a watershed moment: “Innovate or die,” says 27-year-old frontman Eduin Caz. To avoid getting upended by the ensuing lockdowns, the seven-piece act traveled to Caz’s home in Mazatlán, Mexico; rented a studio that was accessible only to band members; and recorded a breakout album to “keep the momentum going,” he says. “We couldn’t let what we had worked so hard to build just fall apart.”
MUSIC・10 DAYS AGO
The Motley Fool

As Markets Hit Records, Can This Red-Hot Sector Keep Soaring?

Markets were mixed, with the Dow falling but the Nasdaq hitting record highs. Lithium stocks did well today and have done well lately. However, EV success won't necessarily translate to strength for every lithium stock. The stock market had a strange day on Friday, as pockets of the market performed...
STOCKS・12 DAYS AGO
Markets Insider

Fannie Mae and Freddie Mac are required by law to pay $1 million per home in some areas. Like everyone in this housing market, Uncle Sam is paying up.
REAL ESTATE・1 DAY AGO