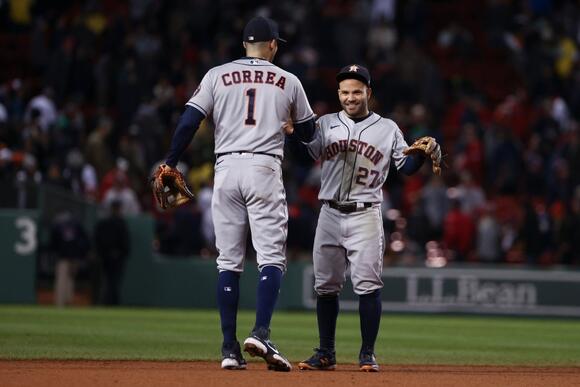 BOSTON ( AP ) — Six outs from falling behind 3-1 in the AL Championship Series and facing elimination in Game 5 in Boston — where the Red Sox had yet to lose this postseason — the Houston Astros offense awakened.

After tying it in the eighth inning on Jose Altuve’s solo homer, the Astros bullied the Boston bullpen for seven runs in the ninth to win 9-2 on Tuesday night and even the best-of-seven playoff at two games apiece.

“This is one of the great things about baseball,” said the Astros’ 72-year-old manager, Dusty Baker. “When you’re dead in the water and things aren’t going good, and then all of a sudden, boom, boom, boom, and you got seven runs.

“That’s what they’ve been doing to us this whole series,” he said. “And we’re capable of doing that as well.”

Jason Castro looked off a potential third strike from Nathan Eovaldi before driving in watch-tapping Carlos Correa with the go-ahead run in the ninth, then the AL West champions kept on scoring to guarantee themselves at least one more game back home.

Game 5 is Wednesday in Boston, with Games 6 and 7 back in Houston on Friday and, if necessary, Saturday.

The Red Sox are 5-0 after playoff losses under manager Alex Cora.

“We’re feeling pretty confident,” said Eovaldi, the Game 2 winner who made his first relief appearance since 2019. “That’s been one of our strengths is being able to turn the page and come in tomorrow.”

In a series that had been dominated by offense — especially Boston’s, which has hit 10 homers in the series, including a record-setting three grand slams to turn Games 2 and 3 into routs — the teams traded first-inning home runs.

Alex Bregman hit a solo shot into the Green Monster seats, then Xander Bogaerts topped it with a towering, two-run drive onto Lansdowne Street in the bottom half to give the Red Sox a 2-1 lead.

Then, the pitchers took over.

It was still 2-1 when Altuve homered against Garrett Whitlock to tie it in the eighth. It was his 21st career postseason home run, breaking a tie with Derek Jeter for third-most in baseball history and trailing only Manny Ramirez (29) and Bernie Williams (22).

Eovaldi, making his first relief appearance since he was coming back from an injury two years ago, came on for the ninth and gave up Correa’s leadoff double.

The Red Sox thought they were out of the inning when Eovaldi’s 1-2 breaking ball appeared to catch the plate for strike three on Castro. Still alive, Castro singled in Correa to give Houston the lead.

“Yeah, a lot of people thought it was a strike,” Cora said. “It was a good game until the end, right? We were one pitch away from ending that inning, and it didn’t happen, and then they scored seven.”

Houston has scored 36 runs with two outs in the postseason, including 18 of its 22 in this series.

“We knew with this team that we’re playing we wanted to pad the lead,” Baker said. “And pad the lead we did, you know what I mean? That one run might not have stood up, especially in this ballpark.”

The Red Sox, who were the first team in major league history to have double-digit hits six straight times in a single postseason, had just five on Tuesday — two of them when already trailing by seven in the ninth.

Nick Pivetta allowed just one more hit after Bregman’s homer before leaving with a 2-1 lead through five innings. Eovaldi took the loss, allowing four runs while getting just two outs.

Kendall Graveman, the fifth Houston pitcher, threw two scoreless innings for the win. The Astros had special praise for Cristian Javier, who pitched three scoreless innings to get them through five as Houston’s bullpen delivered 7 2/3 shutout innings.

“What the relievers did today was amazing,” Altuve said.

Astros: CF Jake Meyers, who injured his left shoulder crashing into the wall in the Division Series clincher, was originally listed in the starting lineup but “wasn’t quite ready yet,” Baker said. Chas McCormick started in center instead.

Red Sox: Schwarber appeared to tweak his left hamstring on a swing in the fourth inning. He limped out a groundout and remained in the game.

Game 5 is Wednesday at 5:08 p.m. Chris Sale will start for the Red Sox after allowing one run over 2 2/3 innings in Game 1. Framber Valdez goes for Houston. He gave up two earned runs in 2 2/3 innings during the series opener.

Carlos Correa has made an official decision on his qualifying offer from the Houston Astros. Correa has declined the Astros’ $18.4 million qualifying offer, according to Jon Heyman. His days in Houston are over. The 27-year-old star is now the top free agent in baseball and is bound to receive...
MLB・14 DAYS AGO
Larry Brown Sports

The major bidding war Carlos Correa and Corey Seager may have been hoping to see materialize may not develop quite as they hoped. On Tuesday, we shared a report saying that the Yankees and Dodgers could be involved in a bidding war for Seager, who is among the top free agents on the market. Correa, another top free agent shortstop, has also been linked to the Yankees.
MLB・12 DAYS AGO
Boston

One of MLB’s fastest players — if not the fastest — is coming to Boston. The Red Sox announced Friday afternoon that they had claimed speedster outfielder Tim Locastro off waivers from the New York Yankees. Locastro, a 29-year-old who has played with Los Angeles Dodgers, Arizona Diamondbacks, and Yankees,...
MLB・24 DAYS AGO
FanSided

The Los Angeles Dodgers had Will Smith, Max Muncy, Justin Turner, Corey Seager, Trea Turner, Mookie Betts, Walker Buehler, Max Scherzer, Julio Urias and Kenley Jansen named among the nominees for the 2021 All-MLB Team. This is the third annual recognition for the top players, with winners being announced on...
MLB・19 DAYS AGO
International Business Times

The New York Mets are skimming the free-agent pool, and one name that could make sense would be Steven Matz. Ironically, the 30-year-old pitcher is the same guy the Mets traded to the Toronto Blue Jays last winter. A reunion between the Mets and Matz would make sense considering the...
MLB・11 DAYS AGO
Empire Sports Media

New York Yankees: Fans know the SS they want and by a wide margin

The New York Yankees made an unusual one-and-done move, moving Gleyber Torres from the team’s experimental shortstop back to second base. Unfortunately, that move caused a juggernaut of other infield questions that will have to be answered by the start of spring training. However, that discussion is for another article; Brian Cashman’s self-admission of obtaining a high-quality shortstop is his priority this offseason.
MLB・17 DAYS AGO
CBS Sports

The 2021 MLB offseason is in full swing, and dominoes are already starting to fall. One of the biggest storylines this winter revolves around the stacked group of free-agent shortstops. Some superstars at that position could find themselves playing for new teams in 2022, and Javier Baez is one guy...
MLB・13 DAYS AGO
FanSided

Yankees next move should be obvious, or else fans will riot

The Yankees need to make a move, and it’s very clear what it is to their fans. To the very loud and apparent demise of their fans, the New York Yankees have been relatively quiet during the 2021 MLB free agency hot stove. The Bronx Bombers, known for their endless amount of cash and ability to get anyone they really want, have been dead silent as names like Scherzer, Seager, and Semien have come off the board.
MLB・7 HOURS AGO
Sportsnaut

The Houston Astros bolstered their bullpen by agreeing to a two-year contract with former Philadelphia Phillies closer Hector Neris, reports Jim Salisbury of NBC Sports Philadelphia. Neris' deal is worth $17 million in guaranteed money, a source told Ken Rosenthal of The Athletic. The 32-year-old had spent his entire eight-year...
MLB・2 DAYS AGO

It appears the Astros have found their replacement for Kendall Graveman, who recently signed a three-year deal with the White Sox. Héctor Neris, a longtime late-inning reliever for the Phillies, has landed in Houston on a $17 million deal over 2 years. The 32-year-old Neris possesses one of the game’s...
MLB・2 DAYS AGO
Sportsnaut

As the 2021 season concludes, baseball fans and teams are excited for the exciting crop of MLB free agents who
NFL・2 HOURS AGO
97.1 The Ticket

While the Tigers are ‘determined’ to sign one of the several star shortstops on the market, they won’t spend $300 million on one player.
MLB・2 DAYS AGO
The Spun

Former Mets pitcher Pedro Feliciano reportedly passed away in his sleep on Sunday night. ESPN’s Eduardo Perez first had the news on his Twitter account on Monday morning. Feliciano was just 45 years old and was reportedly jet skiing on Sunday with his family. Feliciano played nine seasons in the...
MLB・21 DAYS AGO
Larry Brown Sports

It remains unclear where Freddie Freeman will end up, but one thing is clear: there are no worse places for Braves fans to see him than these 3 teams. Although Braves first baseman Freddie Freeman rejected the Braves’ initial extension offer of five years for $135 million, it doesn’t mean that he rejected the prospect of returning to Atlanta.
MLB・7 DAYS AGO
The Spun

The Yankees are sending an infielder to LA. On Monday, the team reported Tyler Wade has been traded to the Angels. “The New York Yankees today announced that they have traded INF/OF Tyler Wade to the Los Angeles Angels,” the team announced on social media. The trade is for a...
MLB・7 DAYS AGO
NJ.com

That’s how some teams approach MLB free agency, including the New York Yankees, who are just two years removed from handing ace Gerrit Cole a record-setting nine-year, $324 million contract. Expect general manager Brian Cashman to do some more spending this winter, according to SNY MLB insider John Harper, who...
MLB・21 DAYS AGO