The Taliban says it's rewarding the families of suicide bombers who attacked US and Afghan troops with money, clothes, and land 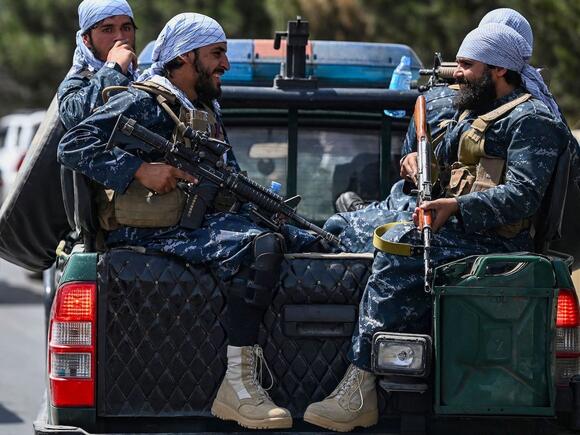 The Taliban has said it is rewarding the families of suicide bombers who attacked US and Afghan troops during 20-year US presence , with sums of cash, clothing, and a plot of land.

At a Monday gathering at the Intercontinental Hotel in Kabul, the Taliban's acting interior minister, Sirajuddin Haqqani, called fighters who died in the suicide bombings "martyrs" and "heroes of Islam and the country," according to a tweet from Interior Ministry spokesman Saeed Khosty.

Khosty also tweeted photos of Haqqani, whose face was blurred out, speaking to the relatives in a packed conference room.

Haqqani also distributed 10,000 afghanis ($112) per family, gave them clothes, and promised them a plot of land each, Kohsty said.

The gesture is a contrast from the group's efforts to gain global support as the country's new rulers.

Earlier this month, the Taliban held talks with President Joe Biden's administration for the first time since the US withdrawal in August. The group cannot afford to alienate the US, which has frozen billions of dollars in Afghan assets .

It is unclear how many US and Afghan soldiers died from suicide attacks in Afghanistan in the last 20 years.

However, a recent Associated Press report found that 2,448 American service members and 3,846 US contractors in total were killed in Afghanistan between 2001 and April this year.

Following the Taliban's victory in August, Islamic State militants have carried out a series of suicide bombings, including one attack at the airport in Kabul at the height of the evacuation efforts that killed more than 100 Afghan civilians and 13 US service members .

The Taliban should thank the people that voted Biden. After all they voted for the killing of 13 soldiers in Afghanistan.

They are in a rock and hard place type situation. Make the world like them and support them. unfortunately their population believes being "martyr" is the ultimate reward for their religion. Many of their population believes they were fighting for freedom just as the early stages of Americans did. I want to give the Taliban the benefit of the doubt that things they are doing are to make changes but also not cause more war and riots in Afghanistan. Unfortunately my cynical side tells me this may have been the plan all along. But my logical side tells me it's completely pointless to fight for 20+ years, regain control of their country and then let if fall apart. A hard lesson for them, running a country isn't all about being able to fight and then expect everyone else to pay them so their country doesn't collapse. They probably aren't the only country who is learning this lesson

The Taliban has banned forced marriage in Afghanistan, decreeing – for the very first time – that “both (women and men) should be equal,” that women should not be considered “property” and that “no one can force women to marry by coercion or pressure.” Widows will also now be allowed to remarry 17 weeks after their husbands’ death, and will be able to choose their husband freely, rather than being forced to marry one of their former husband’s relatives, the group claimed.
RELATIONSHIP ADVICE・1 DAY AGO
CBS News

The U.S. and dozens of nations condemn the Taliban over police killings

President Biden and his administration have faced criticism for not doing enough to help the hundreds of thousands of Afghan citizens who supported the U.S. mission get out of the country. Imtiaz Tyab reports.
PUBLIC SAFETY・1 DAY AGO
Fox News

Secretary of Defense Lloyd Austin was silent for several seconds before telling Fox News anchor Bret Baier on Saturday what his regrets are about the U.S. withdrawal from Afghanistan. "Do you have any regrets about the Afghan withdrawal?" Baier asked Austin during a keynote discussion at the Reagan National Defense...
MILITARY・2 DAYS AGO
Business Insider

The Taliban are courting Iran and China, hoping to avoid blackouts if other countries cut off power to Afghanistan for non-payment

The Taliban has executed dozens of members of the former government's security forces after the surrender of Afghanistan, Human Rights Watch said. Refuting claims the Taliban made to the international community about leading a more inclusive government, new research by HRW alleges the government executed dozens of members of the Afghan security forces after they surrendered in late summer.
PUBLIC SAFETY・4 DAYS AGO
americanmilitarynews.com

A delegation from the United States expressed deep concerns over alleged human rights abuses in Afghanistan during its meeting with Taliban representatives at Doha in Qatar. The team, led by special representative for Afghanistan Thomas West, asked the ruling Islamic militant group to take necessary action to protect the rights of citizens in the war-torn nation, the US state department said.
U.S. POLITICS・4 DAYS AGO
MilitaryTimes

No Afghan family members of U.S. troops have been eligible to come to the U.S. Here’s why

The Defense Department has received about 60 requests from service members and department civilians to get their family members out of Afghanistan and legally into the United States, Pentagon spokesman John Kirby told reporters on Nov. 15, but none of them qualify for an immediate legal residency status. The requests...
FAMILY RELATIONSHIPS・13 DAYS AGO
reviewjournal.com

Benny believed his destiny was to come to America. After learning English, he served as an interpreter for U.S. military forces in Afghanistan when he was just a teenager. After graduating from college, he worked for a U.S. government contractor. “I love the United States. I always have,” said Benny,...
LAS VEGAS, NV・12 DAYS AGO

Nobel Peace Prize winner Malala Yousafzai said a flight that helped more than a hundred Afghans escape the Talbian brought 'hope and safety' to people. The rescue flight departed Kabul at first light with 119 passengers on Monday and flew to Tbilisi, Georgia, in three hours, where passengers changed to another aircraft for a further three-hour flight to reach Greece.
WORLD・14 DAYS AGO
The Independent

‘Our work is not done’: Female Afghan MPs who escaped the Taliban launch women’s parliament in exile

Female MPs from Afghanistan who escaped the Taliban have launched a new women’s parliament to champion human rights while in exile in Greece.Almost half of female Afghan MPs and senators are now living in Greece where they will continue to campaign for women’s rights in Afghanistan, as well as supporting the resettlement of refugees.Nazifa Bek, a former Afghan lawmaker who launched the project, said: “Our work is not done. We were elected by the Afghan people to represent them.“Our people, especially women and girls, and those living in poverty, are facing a severe humanitarian crisis and a crackdown on their...
WORLD・8 DAYS AGO
San Diego Union-Tribune

The National Museum of Afghanistan is open once again and the Taliban, whose members once smashed their way through the facility, now appear to be among its most enthusiastic visitors
WORLD・1 DAY AGO
houstonmirror.com

Taliban Demand Unfreezing Afghan Assets in 'Positive' Talks with US

ISLAMABAD - Afghanistan's ruling Taliban and the United States wrapped up two days of meetings in Qatar on Tuesday, with the Islamist group saying its delegates urged U.S. officials to unfreeze Afghan state assets and remove sanctions. The discussions took place amid growing appeals by aid groups to international donors...
POLITICS・6 DAYS AGO

Taliban going back on its word, US & allies say

The US and more than a dozen of its allies have issued a statement expressing concern over the alleged summary executions of former Afghan government security personnel at the hands of the Taliban. The short communique warns those now in power in Afghanistan that, if confirmed, the killings would "constitute...
POLITICS・2 DAYS AGO
WashingtonExaminer

Taliban forces in Afghanistan are responsible for the death or disappearance of more than 100 former police and intelligence officers, according to a report from Human Rights Watch.
PUBLIC SAFETY・7 DAYS AGO
The Jewish Press

Did you ever notice how from time to time a particular theme appears simultaneously in various media? One that I’ve seen a lot of lately is “Israel doesn’t have the ability to destroy Iran’s nuclear program, so we need to find a way to live with it.” Here is yet another example, from security analyst Yossi Melman, writing in Ha’aretz:
MIDDLE EAST・1 DAY AGO
KTVZ

We know who is attacking us and we know how to get even, says Israel’s cyber defense chief

In a nondescript office park in the desert town of Be’er Sheva, a “war room” filled with screens showing various maps, rolling information, and graphics inform around a dozen or so staffers, manning computers at the central heart of Israel’s civilian cyber defense system. So important is their mission that...
WORLD・3 DAYS AGO
newschain

An Afghan who worked as a guard with the British Embassy in Kabul has said he will have to return to Afghanistan unless the UK is able to help save his family members, claiming the Taliban have tortured his father. Faiz Mohammad Seddeqi, 30, was evacuated to the UK in...
U.K.・8 DAYS AGO
The Independent

Family of 6, including child, wounded in US strike in Syria

A U.S. airstrike targeting an al-Qaida leader in northern Syria wounded a family of six, including a 10-year-old child who suffered serious head injuries, The Associated Press has learned. Ahmad Qassim had picked up his family from his in-laws in northwestern Syria where they had spent four days and was driving back home Friday morning when an explosion occurred, riddling their vehicle with shrapnel.Qassim, a 52-year-old farmer, his wife, two sons and two daughters suffered various wounds in the blast apparently caused by a missile fired from a U.S. drone. The drone was targeting a man on a motorcycle...
MIDDLE EAST・1 DAY AGO
The Independent

US, EU and 20 other countries condemn Taliban for summary killings of ex-Afghan forces

The United States and a group of its allies have condemned the Taliban for allegedly targeting former police and intelligence officers in Afghanistan since seizing power.“We are deeply concerned by reports of summary killings and enforced disappearances of former members of the Afghan security forces as documented by Human Rights Watch and others,” the countries said in a statement on Saturday.A report published by the Human Rights Watch on Tuesday suggested that despite announcing amnesty, the Islamist militants continued to retaliate against the armed forces of the ousted Ashraf Ghani government. At least 100 former police and intelligence officers have...
U.S. POLITICS・2 DAYS AGO
WINKNEWS.com

A man from Afghanistan, who risked his life for a Cape Coral veteran, has landed here in Southwest Florida. That interpreter arrived at RSW on Wednesday morning. The odds of escaping Afghanistan seemed slim, but they were able to. It was an emotional reunion for this family. The Afghan man...
CAPE CORAL, FL・12 DAYS AGO