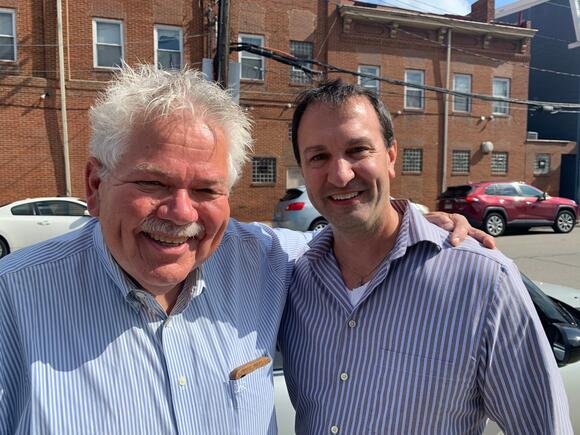 PITTSBURGH (Newsradio KDKA) - He is a quintessential Pittsburgher. Known around the globe for his documentaries that focus on our region. However, he has travelled extensively so where would he live if he could temporarily relocate? And, after discussing his heritage, is he related to Chuck Noll and Paul Newman? Did he really consider a career on the Alaska pipeline? Hmmmm. Listen and find out. He loves Pittsburgh because it constantly surprises him.

He is a historian who may have stumbled across long forgotten knowledge of the East Hills and a decidedly different name. What priceless advice did his late friend, Mr. Rogers, give him? He is responsible for ushering in the era of TV shows about diners and sandwich shops so how does he feel about today’s nationally syndicated and very successful foodie shows? And what so will this journalist, writer, narrator NEVER do?

Thank you for joining us for this episode of ‘Kevin Battle Goes One-On-One With: Rick Sebak.

Pittsburgh natives in Florida give update on hurricane Ian

Hurricane Ian is rapidly intensifying off Florida, gaining top winds of 155 mph, just shy of a Category 5. The National Hurricane Center says only two category 5 hurricanes have hit the U.S. in the past 30 years. Fort Myers is at the highest risk.
PITTSBURGH, PA・1 DAY AGO
KDKA News Radio

As Florida braces for Hurricane Ian, a group of local first responders are driving down to help. First responders from Murrysville Medic One, Rostraver/West Newton Ambulance, and Fayette EMS
FLORIDA STATE・2 DAYS AGO

Organizers called Pittsburgh “significant” in their mission for this week’s meeting - saying Pittsburgh exemplifies how an energy and industrial-dependent economy can transition to tech and innovation.
PITTSBURGH, PA・7 DAYS AGO
KDKA News Radio

Get Marty: Veteran battling cancer just wants to marry his sweetheart, and we're making it happen

Just a few days ago I got a call about a Gulf War Veteran who has been battling cancer. His name is George “Lenny” Wright and all he wants to do is marry the love of his life, Tracy.
CLAIRTON, PA・3 DAYS AGO
KDKA News Radio

Following a shooting that left multiple teens and an adult injured, Kennywood is implementing several new safety measures. According to a release and through a press conference
PITTSBURGH, PA・1 DAY AGO
KDKA News Radio

Kennywood shooting updates and how a gun possibly got in

Kennywood says it continues to work with local law enforcement after three people were shot there Saturday night. Now, people are asking how a gun got into the park in the first place.
ALLEGHENY COUNTY, PA・3 DAYS AGO

The Steelers season kicked off with a wild finish in Cincinnati, but State Rep Patty Kim from Dauphin County says fans in central PA missed most of it.
PITTSBURGH, PA・9 DAYS AGO
KDKA News Radio

Student in custody after assault at Oliver High School

3 people were shot including 2 teenagers at Kennywood Saturday night. Officials said an argument between two groups of teenagers led to the shooting.
ALLEGHENY COUNTY, PA・4 DAYS AGO
KDKA News Radio

Arrest made in connection with catalytic converter thefts

Over the past number of weeks, thefts of catalytic converters in the Pittsburgh area have been on a severe rise. Police in Philadelphia have made an arrest
PITTSBURGH, PA・8 HOURS AGO

Pittsburgh Police are calling a fire that destroyed three of their cruisers Wednesday a pre-meditated and a direct attack. The department is working with ATF
PITTSBURGH, PA・6 HOURS AGO
KDKA News Radio

New York City. Los Angeles. Seattle. San Diego. San Jose. These are the top five U.S. cities with the largest homeless populations. In total, more than 150,000 people. Pittsburgh has only 880 this year. We offer solutions to the homeless situation.
PITTSBURGH, PA・13 DAYS AGO
KDKA News Radio

Three Pittsburgh Police cruisers were destroyed Wednesday morning in a fire that investigators are considering suspicious. The cars were sitting outside of a North Side police training facility.
PITTSBURGH, PA・1 DAY AGO
KDKA News Radio

Get Marty: Hero tree service comes to the rescue for veteran's widow

This is a tough one folks, involving a Korean War veteran’s widow who is in desperate need of help dealing with a situation at her home in Pittsburgh’s Westwood neighborhood.
PITTSBURGH, PA・13 DAYS AGO

Parents of Azuree Charles charged in connection to death

About four months after a 9-year-old boy was found dead outside his New Kensington home, his parents have been charged in connection with his murder.
NEW KENSINGTON, PA・8 DAYS AGO
KDKA News Radio

One man is dead and the suspect is on the run after an altercation Monday night in Jeannette. 23-year-old Antwone Thurston II of Verona is the man wanted
VERONA, PA・2 DAYS AGO
KDKA News Radio

One injured in Upper Hill shooting

Pittsburgh Police were called to the scene of a shooting in the Upper Hill neighborhood. Police and EMS responded to the intersection of Lyon and Cherokee Street around 1:40 p.m. on Wednesday for reports of gunshots.
PITTSBURGH, PA・1 DAY AGO
KDKA News Radio

Scott Twp. man being charged after locking kids in home

A 34-year-old man is being accused and facing charges for locking two children inside his Scott Township home. Sean Conboy is facing unlawful restraint and false imprisonment charges.
SCOTT TOWNSHIP, PA・10 DAYS AGO