Kieran Trippier has been linked with a return to the Premier League reports the Daily Mirror. The former Tottenham player, 31, had previously been subject of interest from Manchester United who could again make a move for the Atletico Madrid right-back.

Leicester will do what they can to keep Youri Tielemans on their books, writes the Daily Mail. The Belgian midfielder is currently on a deal which expires in 2023 and helped the Foxes to their FA Cup win last season with the club eager to tie him down with a new deal. 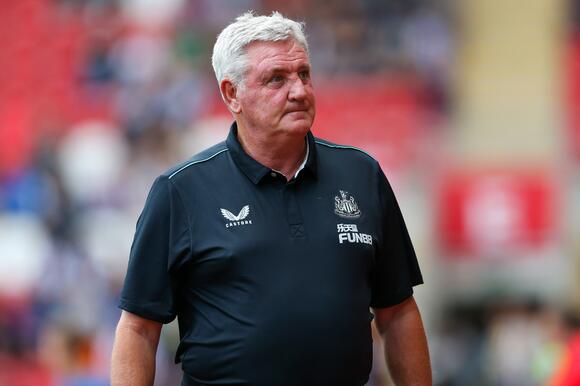 Newcastle have slimmed down their list of potential replacements for Steve Bruce to three, reports the Daily Express. Bruce is expected to be shown the door from the Magpies following the club’s takeover with Eddie Howe , Lucien Favre and Paulo Fonseca the trio all vying for the post.

While the Sun reports that former Arsenal boss Unai Emery is top of the wishlist for the new owners at St James’ Park.

Two clubs are set to spar off for the signature of Alexander Isak , with the Real Sociedad forward wanted by both Manchester United and Manchester City, says the Sun.

Matthijs De Ligt : Barcelona could be in the frame to sign the 22-year-old who is said to be frustrated with his role at Juventus, writes Sport.

Julian Alvarez : Aston Villa are eager to wrap up a deal for the Argentina forward from River Plate with AC Milan looking to sabotage the transfer, according to Calciomercato.

Neto : West Ham are looking to bring in the Barcelona keeper on loan in January with a view to a permanent deal in the summer, Sport says.

Manchester United will only let go of Diogo Dalot - amid interest from Roma - if the Red Devils can secure a deal for Atletico Madrid's Kieran Trippier, according to reports. Reports earlier this month claimed that former United boss Jose Mourinho wants to bring Portuguese compatriot Dalot to the Stadio Olimpico during the January transfer window.
PREMIER LEAGUE・14 DAYS AGO
fourfourtwo.com

Manchester United are set to renew their interest in Atletico Madrid right-back Kieran Trippier, according to reports. The Red Devils were linked with a move for the England international throughout the summer. Ole Gunnar Solskjaer was said to be keen to bolster his options at full-back and provide Aaron Wan-Bissaka...
PREMIER LEAGUE・13 DAYS AGO
fourfourtwo.com

Manchester United: Could Mauricio Pochettino bring Kieran Trippier to Old Trafford with him?

Manchester United are keen on Mauricio Pochettino becoming new manager - posing a potential link back to Kieran Trippier. United were linked with Trippier over the summer transfer window, as they searched for a right-back to compete with Aaron Wan-Bissaka. Eventually, they reportedly agreed terms with Trippier himself - but didn't meet Atletico's asking price for the England international.
PREMIER LEAGUE・10 DAYS AGO
SPORTbible

Lionel Messi emphatically denied a request from a director involving his wife ahead of winning his seventh Ballon d'Or on Monday night. Messi beat Robert Lewandowski, Jorginho and Karim Benzema to the prize, which was presented to him by former teammate and close friend Luis Suarez. Before the ceremony got...
SOCCER・3 DAYS AGO

Manchester United's soon-to-be new manager once called Cristiano Ronaldo "too old and too expensive." Ralf Rangnick made the comment when asked if he would sign Ronaldo for RB Leipzig in 2016. It is a worrying sign for the Portuguese forward's future at Old Trafford. Manchester United's soon-to-be new manager Ralf...
PREMIER LEAGUE・6 DAYS AGO
SPORTbible

Leeds United star Kalvin Phillips is reportedly reluctant to join Manchester United out of fear of the backlash that could come his way. The academy graduate has grown into one of the best in the Premier League in his position and saw his stock rise after a stellar first Premier League campaign and a series of excellent showings for England at Euro 2020.
PREMIER LEAGUE・6 DAYS AGO
ESPN

Count the Ballon d'Or as one of those grand old institutions that's insanely popular. There are several reasons for it, too. There's history: The Ballon d'Or dates back to 1956, which means it predates the European Championships, yellow and red cards, substitutions, color TV, remote controls and of course, FIFA (the video game). There's the fact that top players really, really care about winning it: Clubs mount campaigns on behalf of their star players, guys like Cristiano Ronaldo (despite already having five of these at home) get annoyed when it gets canceled (like it did last year due to the coronavirus pandemic), while Bayern Munich striker Robert Lewandowski's face lit up like a child hearing reindeer footsteps on the roof when he found out he was among the favorites.
MLS・3 DAYS AGO
The Independent

Cristiano Ronaldo has paid tribute to Ole Gunnar Solskjaer following the Norwegian’s sacking as Manchester United coach.Solskjaer was relieved of his duties on Sunday morning, with his side having fallen to a 4-1 defeat at struggling Watford on Saturday.That result was the latest in a poor run that had included a 5-0 home thrashing by rivals Liverpool and a 2-0 derby loss to Man City.Ronaldo returned to United this summer to play under Solskjaer, who was a teammate of the Portuguese at Old Trafford between 2003 and 2007.Now the 36-year-old has bid Solskjaer a warm farewell, writing on...
PREMIER LEAGUE・11 DAYS AGO

Clockwatch: Chelsea, Man City and Liverpool all won to keep the pressure on each other at the top of the table, while Everton fans are increasingly mutinous
PREMIER LEAGUE・2 DAYS AGO
Sporting News

Jurgen Klopp has reacted to Liverpool legend Steven Gerrard's return to the Premier League by declaring that he will now "watch Aston Villa games a bit closer." Gerrard opted to leave Rangers after 3 1/2 years at the helm to take up the top job at Aston Villa last week.
PREMIER LEAGUE・15 DAYS AGO
BBC

Manchester United and England midfielder Jesse Lingard could be on his way to West Ham in January in a £10m deal. Contract talks between United and the 28-year-old have recently broken down, with David Moyes keen to sign Lingard on a permanent basis. (Sun) Tottenham manager Antonio Conte is also...
PREMIER LEAGUE・14 DAYS AGO
goal.com

The competition in the country was stopped by the interim body for two weeks when it took charge. The head of the secretariat of the Football Kenya Federation caretaker committee Lindah Ogutu has hinted at the resumption of the Premier League next week. The leagues in the country were put...
PREMIER LEAGUE・12 DAYS AGO

Rate, review, share on Apple Podcasts, Soundcloud, Audioboom, Mixcloud, Acast and Stitcher, and join the conversation on Facebook, Twitter and email. On the podcast today: Manchester United sack Ole Gunnar Solskjaer after their 4-1 loss against Watford. But did they leave it too late and what happens next?. Elsewhere, Chelsea,...
PREMIER LEAGUE・11 DAYS AGO
94.3 Jack FM

(Reuters) – Talking points from the Premier League weekend:. At present Harry Kane and Harry Maguire must wish every week could be an international week. For England this month they could do no wrong with Kane scoring seven goals in two games against Albania and San Marino and Maguire enjoying trouble-free defending and popping up with a couple of goals to boot.
PREMIER LEAGUE・12 DAYS AGO
BBC

Skipper Matt Grimes believes he can help Swansea City get back into the Premier League. Grimes, 26, has just signed a new three and a half year contract which commits him to the club until 2025. The midfielder, who was a target for Championship rivals Fulham in the summer, said...
PREMIER LEAGUE・10 DAYS AGO
The Independent

When Thomas Tuchel comes in after games and scans the other results, he doesn’t automatically go to Liverpool or Manchester City. At least not yet.“There are some teams behind us who show consistency, who show quality, who show determination,” the Chelsea manager said last week. “This is what it is. You have a right to be proud of your competition here, in the Premier League, and for us it feels good because we are in the middle of that race and we want to stay here. I don’t know if it will settle down.”There is a bit of a...
PREMIER LEAGUE・2 DAYS AGO
ESPN

The British government's fan-led review of English football has recommended a transfer tax on Premier League clubs as a means of redistributing money from the game's elite level to lower divisions and grassroots. A 10% levy on Premier League transfers could raise £160 million a year for lower-league clubs, according...
PREMIER LEAGUE・8 DAYS AGO
Tribal Football

Juventus midfielder Aaron Ramsey wants to return to the Premier League - if he fails to make the grade at Juventus. Ramsey has been at the Italian club since 2019, but has struggled with a litany of injuries in the last two years. The 30-year-old is back in England to...
PREMIER LEAGUE・12 DAYS AGO
goal.com