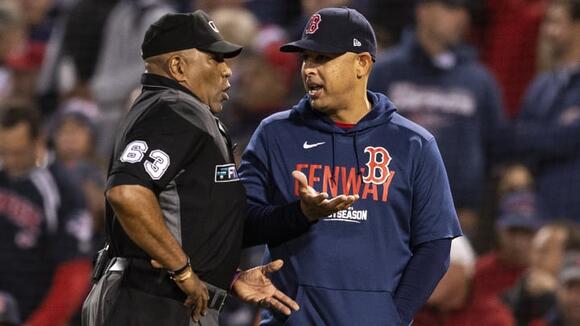 The Houston Astros scored seven runs in the top of the 9th Tuesday night to pull off a 9-2 win over the Boston Red Sox in Game 4 of the ALCS. The win evened the series at two games apiece and represented a big comeback for Houston, who trailed for most of the night. It was also an example of how one call can completely swing a game, as home place umpire Laz Diaz absolutely screwed Boston.

Diaz was terrible behind the plate all night. As ESPN's Jeff Passan reported, the veteran umpire missed a whopping 23 ball-strike calls during the game, which was the most by and umpire so far this postseason. But one call in particular will be what everyone remembers.

The missed call that changed the game happened in the top of the ninth with the game tied 2-2. Nathan Eovaldi was on the mound for the Red Sox, there were runners on second and third with two outs and Houston's Jason Castro was at the plate. Eovaldi had already struck out two batters in the inning and Castro looked overmatched. On a 1-2 count, Eovaldi threw an 80 mph curveball in the upper-right corner of the strike zone. It clearly crossed the plate, while staying under the letters and Castro watched it go by. All of Fenway Park was ready to erupt in celebration of a called third strike. Diaz called it a ball.

Here's the pitch in question:

As you can see, the ball clearly caught the zone and should have ended the top of the ninth with a 2-2 tie:

You can probably guess what happened next.

Castro fouled a ball off before lining a single into right center to drive in a run and make the score 3-2. Jose Altuve then walked to load the bases, Eovaldi was relieved by Martin Perez, and Michael Brandley greeted him by lacing a three-run double into the gap in right-center, clearing the bases. The wheels came off for the Red Sox and by the end of the inning it was 9-2 Astros and the series was tied.

That one bad call by Diaz truly did cost the Red Sox the game. Sure you can point to other factors, like Boston finishing 0-for-9 with runners in scoring position, etc. But we know for a fact that blown call led directly to a huge Astros rally. It could be a series-changing missed call.

Which is why it's worth pointing out that Diaz was one of the worst home plate umpires all season long. How bad was it? His ball-strike accuracy was a woeful 92 percent, placing him fourth-worst in MLB. Yet somehow, in one of the biggest games of the season, he was chosen to call balls and strikes, something he's terrible at.

It's truly staggering how baseball has failed to fix bad umpiring. The technology exists for this not to be a problem. It's easily solvable, and yet here we are talking about an umpire blowing yet another big game.

Six Dallas Cowboys Who Won't Be Back in 2023

A look at six players who won't be back with the Cowboys in 2023.
DALLAS, TX・4 DAYS AGO
The Big Lead

Cowboys fans brawled after losing to the 49ers.
ARLINGTON, TX・5 DAYS AGO
OnlyHomers

Tragic news has struck the world of professional wrestling with the word that one of wrestling's biggest stars has lost his life at the age of 38. Celebrity entertainment outlet TMZ, which is known for breaking the news of many deaths of famous people around the world, broke the news of the death of legendary wrestler Jay Briscoe, who has tragically died in a car crash at the age of 38.
21 HOURS AGO
The Big Lead

Jim Boeheim Tries to Storm Out of Press Conference, Bangs Knee on Table

Stefon Diggs Yells At Josh Allen After Failed Fourth Down

Diggs was mad.
BUFFALO, NY・5 DAYS AGO
The Big Lead

Tom Brady getting a little prickly about retirement talk.
4 DAYS AGO
The Big Lead

It was a catch.
CINCINNATI, OH・5 DAYS AGO
The Big Lead

If you bet $5 on either NFL Conference Championship game this weekend, you'll win $200 GUARANTEED once a TD is scored in the game you bet on! Find out how to claim this special offer here.
19 HOURS AGO
The Big Lead

A thorough apology, if anything.
MEMPHIS, TN・5 DAYS AGO
The Big Lead

Anna Kendrick opens up about abusive relationship, the Cowboys got bounced from the playoffs, Daniel Jones isn't sure about his future and more in the Roundup.
CALIFORNIA STATE・5 DAYS AGO
Sportsnaut

Philadelphia 76ers general manager Daryl Morey believes the team will make a move heading of the NBA trade deadline, but
27 MINUTES AGO
The Big Lead

Three AFC Teams That Should Trade For Aaron Rodgers

Daryl Morey took a shot at the Boston media over Joel Embiid not starting the All-Star game.
BOSTON, NY・22 HOURS AGO