DENVER (CBS4) – Most of the country is seeing a drop in cases of COVID-19, but Colorado continues to be in a surge. An expected plateau two weeks ago has been exceeded.

It’s attracting attention around the country. The New York Times tabulation of COVID cases shows 37 states declining. Colorado is ranked 7th worst in the increase in cases over the past two weeks. 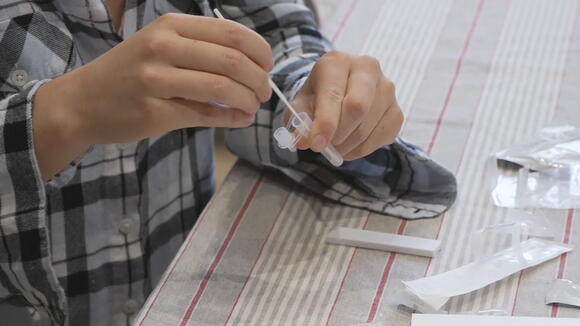 “The predictability of this virus is that it’s completely unpredictable,” said Dr. Michelle Barron, senior medical director of infection prevention at UCHealth Hospital. She believes the rates in many other states peaked earlier. “The states that had the worst vaccination rates also had the most acceleration in cases.”

The number of patients in UCHealth’s 12 hospitals has reached 305, the highest since last December.

“Florida, Alabama, Mississippi, their rates are going down,” said Tri-County Health’s executive director, Dr. John Douglas. “We’re beginning to see our relative rank go up. We’re closer to the top than we were, in part because we’re probably detecting more of what’s always been there than some of the other places were.”

Colorado’s test positivity rates, he notes, tend be to be a lot lower than many other states.

“They probably weren’t detecting nearly as much of the total as we were. When test positivity goes up it tells you there’s either more transmission occurring, or that there’s probably insufficient testing happening, and you know that whatever you’re detecting is probably not the entire story.”

Data on outbreaks shows it happening at schools and many assisted living facilities.

“They were the ones that got vaccinated early on – were more likely to have potential waning, and we also know there was not as high a vaccination rate in some of those staff as well.” 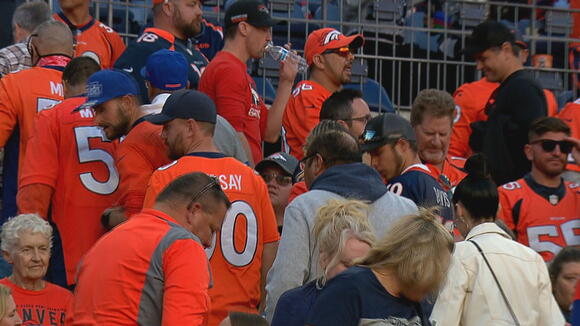 The state is requiring those employees to be vaccinated by Nov. 1. Where Colorado does not seem to be pinning cases is in large crowds like Broncos games.

There was a small cluster at the baseball All-Star game in Denver, says Douglas.

Could it be because of all the travel to Colorado? Tourist come for the fall. Rocky mountain national park was completely full and roads had to be shut down. Then let's not mention the invasion of the people moving here. Do you believe the border jumpers are only staying in Texas and Arizona?

Very interesting. We have one of the highest vaccination rates and one of the worst case rates. Obviously, the vaccines are not very effective.

It could be the weather,, or the sun rotation, or the pull of gravity,, or the brand of beer you drink, or.... In other words, you don't know shineola so just keep your yapper shut!

Massachusetts joined about a dozen other states that offer a digital version of the card when it announced the app Monday.
MASSACHUSETTS STATE・10 DAYS AGO
CBS Denver

DENVER (CBS4) – A federal agency and attorneys general in multiple states are investigating alleged fraud of a COVID-19 testing company – The Center for Covid Control – which has three locations in Denver. The company’s lab, Doctors Clinical Lab, which has the same registered principal address as the Center for Covid Control, has received $115 million in federal tax dollar reimbursements, according to government data, for allegedly unsafe and unreliable testing. (credit: CBS) The Centers for Medicare and Medicaid Services is now investigating, saying it’s “aware of several alleged instances of misconduct by this company’s labs.” An employee for one of the Denver...
DENVER, CO・18 HOURS AGO
KRQE News 13

NEW MEXICO (KRQE) – The omicron variant is so widespread now, just about everybody knows somebody that has COVID-19 these days. Governor Michelle Lujan Grisham said Thursday afternoon, that the state needs to brace itself for the coming weeks. “We’re in a situation where we have six weeks before we’re going to see any kind of […]
ALBUQUERQUE, NM・7 DAYS AGO
Denver7 News KMGH

During the current omicron variant wave, Colorado hospitals are seeing more people with “incidental” COVID-19 cases who were originally admitted for reasons other than the virus than during previous waves involving other variants, state public health and hospital officials said Wednesday.
DENVER, CO・8 DAYS AGO

CHARLOTTE, NC – Pandemic key metrics are hitting record highs this week as cases and hospitalizations rise. Meanwhile, people dying from Covid is on the decline, according to health officials. Health leaders say hospitals are struggling to keep up, meanwhile small businesses are finding it difficult to keep their...
CHARLOTTE, NC・13 DAYS AGO
CBS Denver

COVID In Colorado: State To Give Out Free KN95 Face Masks

DENVER (CBS4) – The state of Colorado will soon provide free KN95 masks to Coloradans. The Colorado Division of Homeland Security and Emergency Management will provide the masks to libraries, fire stations, recreation centers and high traffic community centers to distribute the masks. (credit: Getty Images) Experts say the medical grade masks are more effective in preventing COVID-19 infection as opposed to cloth masks. “Colorado is leading the nation in COVID-19 response starting with our free at-home testing program and now or free distribution of high quality KN95 and surgical-grade masks,” Kevin Klein, Director of the Colorado Division of Homeland Security and Emergency Management said. “We are meeting the moment by ensuring that Coloradans have access to these masks to protect themselves and stop the spread of the virus.” You can find the nearest location and many others online. The masks will be available starting on Thursday.
COLORADO STATE・2 DAYS AGO
959theriver.com

COVID-19 cases are finally on the decline in Illinois. Newly released data from the state’s Department of Public Health shows the average number of people testing positive for the coronavirus each day has dropped 14-percent in the past week. Also, the number of people hospitalized with the virus is down seven-percent from one week ago, while the number of COVID patients in intensive care has declined slightly in recent days.
ILLINOIS STATE・2 DAYS AGO
Marconews.com

COVID omicron surge: Florida ranks 5th among states where virus spreads the fastest. Cases up by 40%

To stay connected with our comprehensive coverage of COVID-19 in Florida, sign up for our Coronavirus Watch newsletter. After Christmas, Florida was No. 9 among states where COVID was spreading the fastest on a per-person basis, a USA TODAY Network analysis shows. Then after New Year's Day 2022, the state creeped up to No. 4. How are we doing this week?
FLORIDA STATE・11 DAYS AGO

The latest COVID-19 data from the Colorado Department of Public Health and Environment is filled with eye-popping information related to the ongoing surge of the highly infectious Omicron variant, including confirmation that Colorado has now exceeded one million cases of the disease since the pandemic began. Here are the COVID...
COLORADO STATE・10 DAYS AGO
CBS Denver

SEVERANCE, Colo. (CBS4) – The growing pains continue to be felt in northern Colorado towns as thousands of newcomers flock to communities between Fort Collins and Greeley. While some towns like Windsor and Timnath recently experienced power issues related to increased demand, now the Town of Severance is struggling to secure clean water taps for the hundreds of new-build buyers flocking to the town. (credit: CBS) As first reported by CBS Denver, a moratorium on new-build water taps in Severance has been issued after the water district the town contracted with was unable to build enough infrastructure to meet the...
SEVERANCE, CO・20 HOURS AGO
KREX

35% of Colorado hospital patients with COVID admitted for other reasons

As hospitalizations rise in Colorado, the distinction between COVID patients in the hospital because of COVID or just hospitalized with COVID has never been more important in understanding how the virus is impacting our system.
COLORADO STATE・9 DAYS AGO
Daily Record

Colorado surpassed 1 million confirmed cases of COVID-19 on Monday, but the more pressing concern was that the number of people hospitalized with the virus reached levels last seen in early December, when the wave fueled by the delta variant was just starting to fade. As of Monday afternoon, the...
COLORADO STATE・10 DAYS AGO

How bad are Colorado drivers? Study ranks state in the bottom 10

(Denver, Colo.) This news won't surprise Colorado drivers who travel Interstates 25 or 70. Coloradans spend too much time sitting in traffic. A new Wallethub study ranks Colorado at 44 after comparing 31 metrics to determine the best and worst states for driving.
DENVER, CO・3 DAYS AGO
klkntv.com

With Omicron cases in South Africa declining, could the United States see the same?

LINCOLN, Neb. (KLKN) –The numbers are startling, the state of Nebraska now hitting a new record for the number of COVID-19 in one day and the same can be said for Lancaster county. On Wednesday the county saw a high of 736 COVID cases reported in a single day.
LANCASTER COUNTY, NE・8 DAYS AGO
CBS Denver

DENVER (CBS4)– The number of Coloradans seeking support for evictions is back to pre-pandemic levels. Nearly 1,000 people reached out to Colorado Housing Connects last week alone. (credit: Getty Images) “Nobody wins when people are evicted,” said Patrick Noonan, program director for Colorado Housing Connects. Noonan explained there’s been a surge of calls to the state’s housing hotline recently. The week of Jan. 10, he said the program saw a 31% increase in call volume. According to state data, more than 2,600 eviction cases were filed by landlords in December. “What we saw in December was almost as high as it was in February...
COLORADO STATE・1 DAY AGO
San Francisco Examiner

COVID-19 cases are on the decline in San Francisco

After a recent surge of COVID-19 cases in San Francisco caused by the omicron variant, the number of cases in the city are starting to decline, Mayor London Breed announced Thursday. The number of cases peaked earlier this month on Jan. 9 with some 2,164 cases per day on average,...
SAN FRANCISCO, CA・15 HOURS AGO
THV11

LITTLE ROCK, Ark. — On Monday, Jan. 17, Arkansas reported 3,600 new COVID-19 cases and 3 deaths. A total of 9,437 people have died in Arkansas due to the virus and more than 1.5 million have been fully vaccinated against coronavirus. Since January 1, Arkansas has seen roughly 104,000...
ARKANSAS STATE・4 DAYS AGO
The Guardian

New York City and some north-eastern US states appear to be seeing rapid decreases in their numbers of Covid-19 cases in recent days, raising the possibility that the Omicron wave has now already peaked in some parts of America. In New York City the rolling seven-day average of new cases...
PUBLIC HEALTH・3 DAYS AGO
cbslocal.com

Is Omicron On The Decline In Colorado?

ENGLEWOOD, Colo. (CBS4)– Who would have thought that sewage could contain good news? Samples taken from the South Platte Renew wastewater treatment site in Englewood and others are used to determine levels of the coronavirus in Colorado’s population. South Platte Renew Director Pieter Van Ry told CBS4, “It...
ENGLEWOOD, CO・6 HOURS AGO
CBS Miami

MIAMI (CBSMiami) – The Omicron variant, which is more contagious and spreads rapidly, is causing concern for the healthcare system and hospitals. “As far as getting this and getting it over with, look the healthcare system cannot handle this,” said Dr. Geeta Nayyar, an Internal Medicine Specialist in Miami. She said with the COVID cases running rampant thanks to the Omicron variant, capacity at our hospitals continues to be challenged. “Independent of COVID-19, if every one of us was to get pneumonia or the flu, all at the same time, the healthcare system is not equipped to handle this volume nor the...
MIAMI, FL・2 DAYS AGO