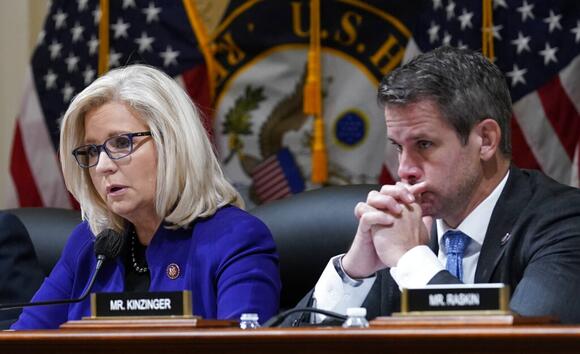 Rep. Liz Cheney said former President Donald Trump appears to have been "personally involved" with the Capitol riot on Jan. 6.

The congresswoman, one of two Republicans on the House Jan. 6 Select Committee, drew a line connecting Trump to the siege of Congress during a meeting Tuesday in which the panel unanimously voted to recommend charging Trump ally Steve Bannon with contempt of Congress for defying a subpoena.

Arguments made by Trump and Bannon that relevant information sought by the committee is protected by executive privilege, Cheney said, "appear to reveal one thing: They suggest that President Trump was personally involved in the planning and execution of Jan. 6, and this committee will get to the bottom of that."

TRUMP CONCEDES TO BEING 'FORMER PRESIDENT' IN CAPITOL RIOT LAWSUIT

Cheney and Rep. Adam Kinzinger are the two Republicans on the panel who were also part of the group of 10 GOP House members to vote with Democrats to impeach Trump on a charge of inciting the Jan. 6 siege of Congress, when rioters stormed the Capitol complex and disrupted lawmakers as they worked to certify President Joe Biden's electoral victory. However, Trump was acquitted by a GOP-led Senate despite seven Republicans voting to convict him.

Trump directed several close advisers not to comply with subpoenas issued by the House Jan. 6 Select Committee. Eleven others tied to the organization of the Jan. 5 and Jan. 6 rallies that led up to the Capitol riot have also been subpoenaed . One facet of the scrutiny on Trump is the speech he delivered to rallygoers at a rally near the White House on Jan. 6, before the Capitol riot, in which he claimed there was widespread fraud in the 2020 election. He urged the crowd to "fight much harder" and "stop the steal."

Trump's legal team filed a complaint in federal court on Monday that seeks to block the release of documents to the Jan. 6 panel and challenge Biden's decision to waive executive privilege .

Ahead of the contempt vote, Trump chastised "low-polling" Cheney and "Cyrin'" Kinzinger in a statement released by his Save America PAC on Tuesday. He also slammed the panel as being the "fake, highly partisan Unselect Committee" that is "composed of absolute political hacks who want to destroy the Republican Party and are decimating America itself."

Bannon, who was Trump's chief strategist for much of 2017 but not a White House official around the time of the Capitol riot, drew scrutiny for his comments on the day leading up to the chaos.

"All hell is going to break loose tomorrow. ... So many people said, ‘Man, if I was in a revolution, I would be in Washington.’ Well, this is your time in history," he also said, according to a select committee report .

Bannon has defended his "hell" comment , saying it was in reference to then-Vice President Mike Pence rejecting the 2020 election results as he presided over the certification process in Congress on Jan. 6.

Pence, however, did not try to send the results back to certain states Trump lost in November. In fact, he sent a letter to Congress saying he did not have the power to reject Electoral College votes, dealing a further blow to Trump’s increasingly futile hopes to deny victory to then-President-elect Biden.

"Based on the committee's investigation, it appears that Mr. Bannon had substantial advanced knowledge of the plans for Jan. 6 and likely had an important role in formulating those plans," Cheney said at the select committee meeting. "Mr. Bannon was in the 'war room' at the Willard on Jan. 6, he also appears to have detailed knowledge regarding the president's efforts to sell millions of Americans the fraud that the election was stolen."

The resolution recommending contempt for Bannon is now set to go to the full House for consideration. A vote is set for Thursday. If the Justice Department prosecutes Bannon and he is convicted, he could face fines up to $100,000 and up to a year in prison.

You bet he was involved and he knows it! Why else would he sue to not have an investigation?? Only the guilty do something like that!! 🙄😆

Why are will still to this day wasting our tax payers money on this? He’s no longer president. Move on people and address real issues happening today.

hi 🖐🖐🏿 sportsman's! the Bigg Pappa here. been off the grid for a couple of months on assignment. hey, why is Agolf Twitler not too happy? his boyfriend mr. pillow says Agolf won 3 or 4 times since Nov elections. mr. pillow says Agolf gonna win on Thanksgiving, Christmas and new years. soooo much winning! BIGGLY!!!🤪🤣🇺🇲😜😆🇺🇲👍🏿👍🇺🇲🇺🇲

This week’s White House Report Card finds President Joe Biden suffering through a cold passed on by his grandson, a mixed jobs report, a new coronavirus variant sweeping the nation, and his vice president stumbling through her latest string of staff implosions.
POTUS・1 DAY AGO
WashingtonExaminer

Former United States Ambassador to the United Nations Nikki Haley visited former President Donald Trump weeks after he denied her such a meeting.
PRESIDENTIAL ELECTION・2 DAYS AGO
The Guardian

In remarks to diners at his Mar-a-Lago resort in Florida on Saturday night, Donald Trump called the American media “crooked bastards” and Gen Mark Milley, the chairman of the joint chiefs of staff, a “fucking idiot”. The meandering, foul-mouthed speech to Turning Point USA, a group for young conservatives, was...
POTUS・5 HOURS AGO

The congressman was in the Capitol the day it was stormed by Trump supporters, and led the impeachment prosecution. The fight, he says, is far from over. Chris Bryant: ‘Nearly everyone I meet says: “I wouldn’t want your job”’. He spent 5 January at a graveside service for his son,...
CONGRESS & COURTS・18 HOURS AGO
Newsweek

The former president's statement prompted sarcastic comments on social media from a range of his detractors.
PRESIDENTIAL ELECTION・1 DAY AGO
Washington Post

When he first learned he had tested positive for the coronavirus, President Donald Trump was already aboard Air Force One, en route to a massive rally in Middletown, Pa. With him on the plane that Saturday evening were dozens of people — senior aides, Air Force One personnel, junior staffers, journalists and other members of the large entourage typical for a presidential trip — all squeezed together in the recirculating air of a jetliner.
POTUS・12 HOURS AGO
The Guardian

In a blurb on the cover of Mark Meadows’ new book, Donald Trump calls the former congressman a “great chief of staff – as good as it gets” and predicts “a great future together”. The former president has also promoted the book to his followers. Now the book is in...
POTUS・1 DAY AGO

(CNN) — Bob Dole, a Republican Party stalwart and presidential hopeful who espoused a brand of plain-spoken conservatism as one of Washington's most recognizable political figures throughout the latter half of the 20th century, died Sunday. "Senator Robert Joseph Dole died early this morning in his sleep. At his death,...
U.S. POLITICS・18 HOURS AGO
Rolling Stone

The House Select Committee to Investigate the Jan. 6 Attack on the U.S. Capitol has been busy. In the five months since the probe was launched, the committee has issued dozens of subpoenas to high-profile members of former President Trump’s circle, as well as a smattering of other MAGA-affiliated figures involved in the effort to overturn the results of the 2020 election. The process has been fraught for a number of reasons, but revelations that have emerged from Rolling Stone’s conversations with cooperating sources indicate the committee could be sitting on a mountain of material — material that could clarify what...
CONGRESS & COURTS・2 DAYS AGO
Washington Times

Biden, Trump, lawmakers in both parties unite in praise of Bob Dole

Tributes for former Sen. Bob Dole poured in from presidents, lawmakers of both parties, veterans and other admirers after the war hero and longtime Republican statesman died Sunday at age 98. President Biden, who served in the Senate with Mr. Dole for 23 years, praised the late Kansas Republican for...
PRESIDENTIAL ELECTION・19 HOURS AGO
Axios

Republican and Democratic politicians, including former Senate colleagues, are sharing condolences and memories commemorating the life of Bob Dole, who passed away at 98 on Sunday morning. The big picture: Dole, the Republican presidential nominee in 1996, was the longest-serving Republican leader in the Senate until 2018, when current Senate...
CONGRESS & COURTS・17 HOURS AGO

In this daily series, Newsweek explores the steps that led to the January 6 Capitol Riot. On Saturday, December 5, Donald Trump flew to Valdosta, Georgia, to speak at a rally to support two Republican party candidates for the Senate, Kelly Loeffler and David Perdue. It was his first rally since the election, a month earlier.
PRESIDENTIAL ELECTION・1 DAY AGO
Marietta Daily Journal

Nikki Haley, unable to escape 2024 intrigue, tells Republicans in SC: 'We will win'

CHARLESTON, S.C. — South Carolina's Republican presidential primary flickered to life Thursday night when former Gov. Nikki Haley took the stage in Charleston, where she addressed a room full of GOP voters who, at times, struggled to hide their own hopes about her political future. One man jumped to his...
CHARLESTON, SC・2 DAYS AGO
Washington Post

An earlier version of this article misidentified Rep. Bennie G. Thompson as Bernie. The article has been corrected. It’s rare when lawyers — as opposed to their clients — take the Fifth Amendment. But Jeffrey Clark, the former Justice Department lawyer who reportedly tried to help Donald Trump overturn the 2020 presidential election, is now claiming the privilege against self-incrimination to avoid testifying before the House committee investigating the Jan. 6 attack on the Capitol. He has just been joined in that posture by one of Trump’s main outside legal advisers, John Eastman.
POTUS・2 DAYS AGO
Washington Post

The Trump family has long treated rules and laws as nuisances that are only for the little people. And the news that Donald Trump tested positive for covid-19 before the first 2020 presidential debate shows that this tendency may be even more depraved and malevolent than you thought. Opinions to...
POTUS・3 DAYS AGO

In 2020, the Republican party didn’t even pretend to have a platform beyond their allegiance to Donald Trump, eschewing any policy proposals in favor of a resolution to “continue to enthusiastically support the President’s America-first agenda.” They lost the White House and the Senate in that election, but they appear to be staying the course heading into the midterms: According to Axios, Mitch McConnell has been telling donors and fellow lawmakers that Republicans will not be releasing a legislative agenda ahead of next year’s vote — a reflection of the utter nothingness at the heart of the GOP.
U.S. POLITICS・2 DAYS AGO
Business Insider

John Eastman is the second witness who has invoked or plans to invoke the Fifth Amendment in response to a January 6 committee subpoena.
PRESIDENTIAL ELECTION・2 DAYS AGO
The Independent

Federal appeals judges asked Friday whether a U.S. president's every remark is part of the job as they weighed whether former President Donald Trump can be held liable in a defamation case that concerns his response to a rape allegation.Trump and the Justice Department say he was acting in his official capacity when he spoke to the media about writer E. Jean Carroll's accusation, so they want to swap the U.S. government in for Trump himself as the defendant in her defamtion lawsuit. The change might sound technical, but it could make a big difference. Federal law makes it...
PUBLIC SAFETY・2 DAYS AGO
Newsweek

Trump called it "not true" that Melania is enjoying private life and isn't interested in returning to Washington, D.C.,
PRESIDENTIAL ELECTION・3 DAYS AGO