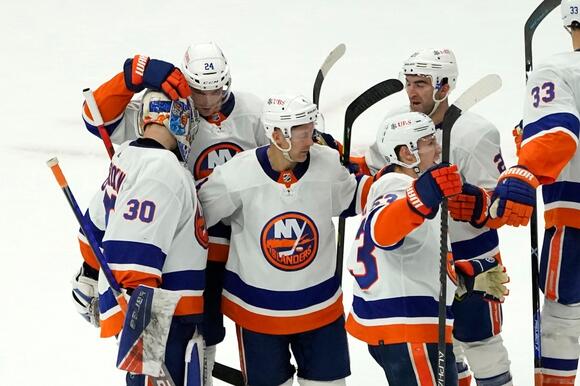 CHICAGO (AP) — Ilya Sorokin made 39 saves and Oliver Wahlstrom scored twice in the third period, helping the New York Islanders beat the Chicago Blackhawks 4-1 on Tuesday night for their first victory of the season.

Anthony Beauvillier and Cal Clutterbuck also scored as New York improved to 1-2-0 on its opening 13-game road trip. The Islanders don’t play their first home game at the new UBS Arena until Nov. 20.

Chicago outplayed New York for long stretches in its home opener, but remained winless during a sluggish 0-3-1 start. Coach Jeremy Colliton was booed by the crowd during pregame introductions, and there were more boos as the Islanders pulled away in the third.

MacKenzie Entwistle scored for Chicago with 26 seconds left, and Marc-Andre Fleury made 25 stops.

The Blackhawks have been outscored 17-8 this season. They haven’t led in any of their four games.

New York scored three times in the third. Wahlstrom made it 2-0 when he intercepted an errant pass by Henrik Borgstrom and eluded sliding defenseman Jake McCabe before beating Fleury through the goaltender’s legs 48 seconds into the period.

Wahlstrom then scored from the left circle at 8:51, and Clutterbuck made it 4-0 with his first of the season at 11:06.

Chicago forward Mike Hardman left about eight minutes into the third after absorbing a big hit by Matt Martin. It was Hardman’s first game after he was recalled from the minors on Monday.

Blackhawks winger Jujhar Khaira then fought with Martin, but it wasn’t enough to wake up his listless team.

The Islanders got Martin back after the forward missed the first two games because of offseason ankle surgery, but Anders Lee was scratched because of an illness. The team said it wasn’t COVID-19 related.

Chicago put together a strong start, outshooting New York 18-9 in the first period. But Sorokin was solid in net, and the Islanders started to play better at the start of the second.

Beauvillier dug the puck out from behind the net and slammed it home for a 1-0 lead 4:08 into the period. It was Beauvillier’s first goal of the season after he had 15 last year.

New York had a chance to add to its lead when Chicago defenseman Seth Jones was sent off for hooking with 2:06 left. But the Blackhawks killed the penalty.

Alex DeBrincat got loose for a short-handed breakaway late in the second, but was denied by Sorokin.

As they’ve done lately, Blackhawks make the most of extra time against the Capitals

WASHINGTON D.C. – One of the reasons that the Blackhawks have been able to enjoy some success with interim head coach Derek King has been their ability to do the most with extra time. Another example came on Thursday night when the team’s late rally brought them new life on the road against one of […]
NHL・3 DAYS AGO
WGN News

ELMONT, NY – There’s been no denying the Blackhawks’ prowess lately when they’ve gone to overtime or the shootout, but they were hoping that it wouldn’t have to be Sunday night. They entered the final minute of their game against the struggling Islanders on Sunday night with a 2-1 lead and Marc-Andre Fleury holding his […]
NHL・16 HOURS AGO
WGN News

CHICAGO – After quite a quick Thanksgiving week that included coaching speculation, an injury to the team’s starting quarterback, and the ending of a five-game losing streak, the Bears were able to get a little bit back to normal this week. Matt Nagy is still the head coach and the Bears are still a few […]
NFL・2 DAYS AGO
Chicago Tribune

This latest edition of the NHL Stat Corner covers the past two days (Friday/Saturday) since the NHL took a one-day break for American Thanksgiving. Scoring highlights this entry with lots more player and team stats and milestones from around the NHL. Ovechkin Goals Fuel the Capitals. Alex Ovechkin is tied...
NHL・8 DAYS AGO
Sportsnaut

Capitals stymied at home by Blackhawks in shootout

The sound of a puck clanging into the metal post echoed throughout Capital One Arena not once but twice in the Washington Capitals’ 4-3 shootout loss Thursday night to the Chicago Blackhawks. On each of the Capitals’ first two attempts, the metalwork came to the aid of Blackhawks goalie Marc-Andre Fleury. On the third, against captain Alex Ovechkin, Fleury needed only his pads to secure the win.
NHL・4 DAYS AGO
Blueshirt Banter

For the first time in nearly three years, the Chicago Blackhawks will come into Madison Square Garden and take on the New York Rangers. The league’s temporary realignment for the 2020-21 season meant that these Original Six foes didn’t play each other, and the Blackhawks’ once per season trip into MSG was scheduled for the season finale of 2019-20, which was wiped out due to the COVID-19 outbreak.
NHL・2 DAYS AGO

Patrick Kane backs Semyon Varlamov down and scores high glove, while Marc-Andre Fleury stops Anthony Beauvillier to win it in the shootout. The New York Islanders lost their 11th straight game when Marc-Andre Fleury got his 499th NHL win in the Chicago Blackhawks' 3-2 shootout victory at UBS Arena in Elmont, New York, on Sunday.
NHL・1 DAY AGO
Sportsnaut

The NHL season officially started on October 12. In this article, we track all the NHL games today as well
NFL・3 HOURS AGO
WEEI Sports Radio

The NHL’s inconsistency when it comes to penalizing slew-foots continues, as Devils defenseman P.K. Subban committed his fourth of the season Friday night and apparently won’t face any supplemental discipline for it.
NHL・2 DAYS AGO

UBS Arena: A new home for the Islanders

Development plans, political infighting, ownership changes, a move to Brooklyn, a move back to Nassau - and a global pandemic - here's a look at the twists and turns on the Islanders' road to Belmont.
NHL・14 DAYS AGO
WGR550

With Dustin Tokarski in COVID-19 protocols, there a good chance that newly acquired goalie Malcolm Subban will make his Sabres debut on Saturday. His last game in the NHL was for the Chicago Blackhawks back on May 3
NHL・2 DAYS AGO
Sportsnaut

Tuesday evening game against the Adrian Blackhawks at Wynn Gymnasium. The Tigers lost to the Blackhawks 57-47 in the season opener for both teams.
NEVADA, MO・4 DAYS AGO
Sportsnaut

Fort Atkinson's wrestling team opened its season with a 39-36 loss to Waunakee in a dual meet at FAHS on Friday. Waunakee scored three consecutive pins at the 195, 220 and 285 weight classes to eek out the victory. Fort's Jacob Ashland (145 pounds) pinned Gabe Guralski in 2 minutes,...
FORT ATKINSON, WI・3 DAYS AGO
pioneertribune.com

NEGAUNEE – The start to the 2021 basketball season got off to a rough start for the Lady Emerald basketball teams Tuesday night. Following a 63-24 loss by the JV squad, the varsity fell prey to a senior-dominated Miners team. The Miners put up 22 points on their home court in the first and second quarters, forcing a running clock […]
NEGAUNEE, MI・5 DAYS AGO