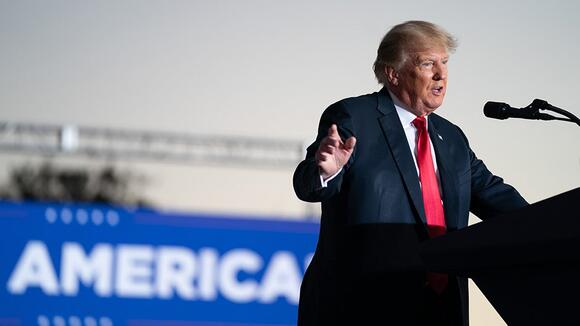 Fortenberry was charged with one count of scheming to conceal material facts and two counts of making false statements to federal investigators after allegedly concealing information about illegal contributions to his 2016 campaign.

“Isn’t it terrible that a Republican Congressman from Nebraska just got indicted for possibly telling some lies to investigators about campaign contributions, when half of the United States Congress lied about made up scams,” Trump said in his statement.

“They made up fairy tales about me knowing how badly it would hurt the U.S.A.—and nothing happens to them. Is there no justice in our Country?” he concluded.

Fortenberry had denied all the accusations against him and said he will fight the charges.

“We will fight these charges. I did not lie to them,” Fortenberry said. “This is wrong on so many levels.”

Fortenberry allegedly received $30,000 from Gilbert Chagoury, a Nigerian billionaire, and allegedly learned about the donation in 2018.

Foreign nationals are not allowed to donate to U.S. campaigns, and the money was allegedly circumvented so the individual donor limit could be surpassed.

Authorities say Fortenberry lied to authorities when asked if he knew about the donation and worked to actively cover it up.

Trump argues Jan. 6 panel's pursuit of his records could permanently damage the presidency

Attorneys for former President Donald Trump on Wednesday argued that the pursuit of his White House records by a congressional committee investigating the Jan. 6 attack on the Capitol could have long-lasting, harmful effects on the presidency. "The [committee’s] clear disdain for President Trump is leading them to a course...
POTUS・1 DAY AGO
Newsweek

The RNC called Trump "a leader of our party" and said that defending him was "critical to the GOP."
NEW YORK CITY, NY・3 DAYS AGO
Fox News

Donald Trump Rages at Joe Biden Over Gas Crisis: 'They Want to Destroy Our Country'

Donald Trump claimed the U.S. would have continued to prosper regarding energy if Joe Biden did not try to close the oil industry.
PRESIDENTIAL ELECTION・4 DAYS AGO
Newsweek

In this daily series, Newsweek explores the steps that led to the January 6 Capitol Riot. "Stop golfing and concede," Republican Governor of Maryland Larry Hogan tweeted at Donald Trump on Sunday, November 22. Hogan said the president's "ridiculous challenges that are not based on fact need to end." "We've...
POTUS・4 DAYS AGO
Daily Herald

AUSTIN, Texas -- U.S. Rep. Louie Gohmert has joined the crowded field of Republicans mounting primary challenges against Texas Attorney General Ken Paxton. The East Texas lawmaker is the latest prominent member of his party seeking to unseat the incumbent in the wake of Paxton's top deputies reporting him to the FBI last year for alleged corruption. Gohmert announced his candidacy on Twitter Monday with a fundraising request that highlighted 'œthe latest ethical, moral, and criminal allegations" against Paxton.
TEXAS STATE・3 DAYS AGO
The Guardian

Republicans’ vilification of Trump critics is ‘ruining’ the US, says governor

The Republican party’s vilification of members of Congress who have criticized Donald Trump or supported bipartisan legislation is “ruining America”, New Hampshire’s governor, Chris Sununu, said on Sunday, adding another tacit voice to the small but growing internal opposition to the former president. Sununu, seen as a rising star of...
PRESIDENTIAL ELECTION・5 DAYS AGO

David Drucker on how the GOP is navigating Trump - "The Takeout"

Former President Trump has been teasing another run at the presidency in 2024 — just one of many reminders for the Republican Party that its future hangs in the "huge, looming shadow" of the 45th president, say Washington Examiner senior political correspondent David Drucker. In his new book, "In Trump's...
PRESIDENTIAL ELECTION・7 DAYS AGO
WashingtonExaminer

On Feb. 24, 1972, two weeks before the Democratic presidential primary, the Manchester Union Leader published the now-infamous “Canuck letter.” This letter to the editor accused Democratic Sen. Ed Muskie of laughing at a racist remark by one of his staffers about blacks and Francophone Mainers. To this day, the...
PRESIDENTIAL ELECTION・9 DAYS AGO
WashingtonExaminer

Former President Donald Trump discussed loyalty and reiterated claims that the 2020 election was stolen from him Wednesday while speaking to My Pillow CEO Mike Lindell.
PRESIDENTIAL ELECTION・9 DAYS AGO

The House voted to censure Republican Representative Paul Gosar for sharing an animated video that depicted violence against Democrats. Kris Van Cleave has the latest.
CONGRESS & COURTS・9 DAYS AGO
Newsbug.info

WASHINGTON — Homeland Security Secretary Alejandro Mayorkas found himself on defense Tuesday before the Senate Judiciary Committee as Republicans grilled him on the record-high number of migrants who journeyed to the southwest border last fiscal year. In the first hearing on oversight of the Department of Homeland Security under the...
CONGRESS & COURTS・9 DAYS AGO
News Channel Nebraska

That’s how much the $1.2 trillion infrastructure bill, signed into law Monday by President Joe Biden, will mean to Nebraska. According to the Nebraska Democratic Party, the $3 billion will be divided between roads, broadband in rural Nebraska, safe water, the transition to electric cars and better public transportation. NDP...
NEBRASKA STATE・10 DAYS AGO
Newsweek

Democrats are working to negotiate a government funding deal, but Republicans have a long list of demands before they'll come to the table.
PRESIDENTIAL ELECTION・11 DAYS AGO
Axios

After Bannon’s indictment, ‘the days of deferring to Trump are coming to a close’

Former Trump advisor Steve Bannon has been charged with two counts of contempt of Congress, a warning to anyone who dares to defy the January 6th Committee. Politico National Correspondent Betsy Woodruff-Swan, former Watergate prosecutor Jill Wine-Banks and Democratic strategist Juanita Tolliver share what to expect when Bannon appears in court. Nov. 14, 2021.
CONGRESS & COURTS・12 DAYS AGO
The Guardian

6 January panel member says DoJ move may ‘shake loose’ others such as former chief of staff Mark Meadows, who has ignored subpoena
CONGRESS & COURTS・12 DAYS AGO