Kotkaniemi set for return to Montreal as ‘Canes take on Canadiens 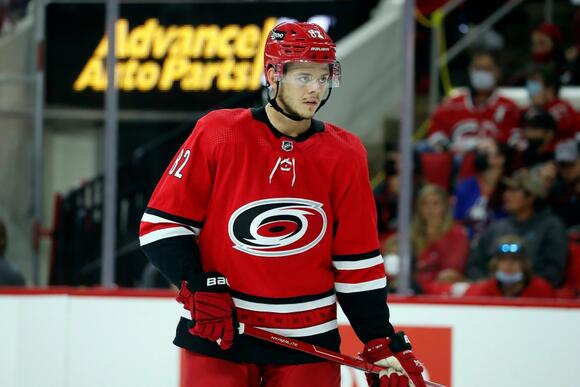 RALEIGH, N.C. (WNCN) – The Carolina Hurricanes travel to Montreal to take on the Canadiens Thursday, and the glaring storyline with this game is the offseason interactions between the two teams. The ‘Canes made an offer sheet this year to Montreal forward Jesperi Kotkaniemi. The contract was for one year and was worth $6.1 million.

“I have really good memories from there. Grateful they drafted me and gave me a chance. It was a great spot to play for two years. Everybody knows they have unbelievable fans, great teammates. Couldn’t wish any better way to start my NHL career,” Kotkaniemi said Tuesday ahead of the return to Montreal.

There were more layers to this that made it more intriguing. The Canadiens made an offer sheet to Hurricanes star Sebastian Aho in 2019, Carolina matched it. So, it might be no coincidence that the signing bonus for Kotkaniemi was $20, which happens to be the same number Aho wears for the ‘Canes.

How the Kotkaniemi acquisition can become a ‘win’ for the Hurricanes

Playing against your former team is just part of hockey, but it is still a unique experience.

“He signed up for it. I think it’s going to help him. Sometimes it fuels you to have a good game and I hope that’s how he uses it. And I think this obviously doesn’t happen a lot in the league, so it’s a unique situation,” said Hurricanes captain Jordan Staal.

Staal has been in this situation before. Returning to his former team, the Pittsburgh Penguins, while playing for the Hurricanes.

“It was weird. If you ask any player that goes back playing a number of years in the same place, so it’s a little weird going back, but also exciting. And it’s fun, so I’m excited for K.K. And hopefully our group plays well for him,” Staal said.

Kotkaniemi’s big move to Raleigh came with lots of opinions — none he’s paid much attention to.

After fast start, ‘Canes find themselves with unwanted time off

“I think everyone has their own opinion on that. I think I just did what’s best for me at the moment, so I feel like everyone can do whatever they want, so let’s just go with that.”

On the ice, Carolina is doing well. It’s 2-0-0 to start the season. A squad with a significant amount of new faces has meshed very well on the ice. Off the ice, Kotkaniemi is enjoying his new home in Raleigh.

“It’s been great. It’s a great spot. Guys are really great here,” he said. “The whole team is working really hard and you can see that on the ice, you know? A lot more golf carts here for sure. It’s sunny out every day, so that’s nice. So like I said before, great team, great group of guys here, so I’ve had a blast so far.”

As far as if he’s spoken to his former team, it doesn’t appear so.

“I’m just part of this team right now. I belong here, so I don’t really chat with the other team anymore that much so it will be fun to see them on the ice as the opposing team, so it will be fun,” Kotkaniemi said.

Puck drop for the Canadiens and Hurricanes is Thursday at 7 p.m.

Kevan Miller might just take the cake for Brad Marchand’s biggest fan. The former Bruin was spotted in Boston on Wednesday showing support for his old teammate. Miller stood in front of TD Garden with a personalized Marchand sign while also wearing a Marchand jersey. On one side it read, “Honk if you love Marchand”, while the other side said, “Millsy loves Marchand.”
NHL・8 DAYS AGO
Yardbarker

It seemed like a pretty comical moment towards the end of the New York Rangers 5-2 win over the Boston Bruins. Artemi Panarin and Bruins super-pest Brad Marchand were jawing at each other. The confrontation ended with Panarin throwing his glove at Marchand. ABC commentator, AJ Mleczko was in between the benches when the altercation took place. “I don’t mean to laugh,” she said. “It is heated and intense.”
NHL・1 DAY AGO
awinninghabit.com

Montreal Canadiens: Three Trades the Habs Could Make To Shake Things Up

The Montreal Canadiens start to the 2021-22 season has been a disastrous one. A five game losing streak without being able to average a goal per game to begin a season is not ideal. It hasn’t gotten much better over the past ten or so games either. The Canadiens have...
NHL・11 DAYS AGO
WEEI Sports Radio

THE CAROLINA HURRICANES FINALLY PLAY NICE WITH THE MONTREAL CANADIENS

After relentlessly ripping into the Montreal Canadiens on a couple of occasions now, the Carolina Hurricanes appear to finally be ready to play nice. At least for a day. The team has decided to make a donation to the Canadiens' Children's Foundation in honour of World Kindness Day. "We may...
NHL・14 DAYS AGO
Sportsnaut

Dylan Larkin scored two goals, including the game-winner in overtime, to lead the host Detroit Red Wings to a 3-2
NHL・14 DAYS AGO
Yardbarker

Rangers vs Canadiens Preview by the numbers: Chytil set to return, Shesterkin to start

Montreal Canadiens: Joshua Roy Shows Why He is One of QMJHL’s Top Scorers

Montreal Canadiens prospect Joshua Roy had a couple of negative narratives surrounding him as he headed into 2021 NHL Draft weekend. The big, skilled, scoring winger had shown a lot of promise on the ice, but he was bound to fall to the later rounds based on questions around his work ethic and compete level.
NHL・13 DAYS AGO

Tune in here Pittsburgh Penguins vs Montreal Canadiens Live Score!. In a few moments we will share with you the starting lineups for the Pittsburgh Penguins vs Montreal Canadiens live match, as well as the latest information from the Centre Bell. Do not miss a detail of the match live updates and commentaries of VAVEL coverage.
NHL・10 DAYS AGO
Sportsnaut

On the sixteenth day of November, the Blueshirts are set to play their sixteenth game of the 2021-22 campaign. Tonight’s affair will be an Original Six matchup, with the Rangers welcoming the Montreal Canadiens into the world’s most famous arena in a class of red, white, and blue teams. The...
NHL・11 DAYS AGO
Sportsnaut

Montreal Canadiens forward Brendan Gallagher was fined $2,500 by the NHL on Wednesday for his actions against New York Rangers
NHL・10 DAYS AGO
Sportsnet.ca

Montreal Canadiens superstar goaltender Carey Price skated by himself earlier this week and is "doing better," according to coach Dominique Ducharme. With Price and Jake Allen out, Samuel Montembeault and Cayden Primeau have been the crease crew for the Canadiens. Price, 34, voluntarily entered the NHL's player assistance program more...
NHL・10 DAYS AGO
FOX Sports

LINE: Canadiens -110, Predators -110; over/under is 5.5. BOTTOM LINE: Montreal aims to stop its four-game slide with a win against Nashville. The Canadiens have gone 3-6-1 in home games. Montreal averages 9.9 penalty minutes per game, the ninth-most in the league. Brendan Gallagher leads the team serving 24 total minutes.
NHL・9 DAYS AGO
FanSided

Montreal Canadiens goaltender Cayden Primeau made his season debut on Tuesday night against the New York Rangers. Primeau was a 7th round pick in the 2017 NHL Draft, but after two terrific NCAA seasons with Northeastern and some great stretches of hockey with the Laval Rocket over the past two seasons, he has become a really strong goaltending prospect.
NHL・9 DAYS AGO
Sportsnaut