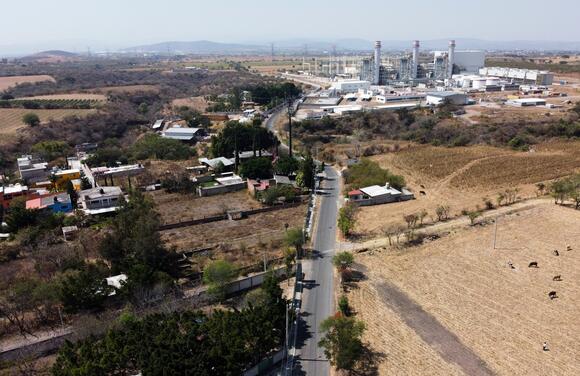 Mexico’s government claimed Tuesday that it is leading a transition to more renewable energy, even though President Andrés Manuel López Obrador is pushing to restrict private wind and solar projects.

In a statement following a visit by U.S. climate envoy John Kerry Mexico said it was seeking to cooperate with the United States on renewable energy. But many of the wind and solar electrical plants that López Obrador wants to limit were built by U.S. or Spanish firms.

The statement touted “cooperating closely with the United States to accelerate the roll-out of renewable energy in Mexico, including wind, solar, geothermal and hydroelectric.”

López Obrador has submitted a bill to guarantee preferences for dirtier state-owned power plants that burn coal and fuel-oil.

Hydroelectric power is one of the few renewable sources that López Obrador's administration has promised to invest in. But because Mexico's dams are used for several purposes — storing water for human use, flood control and generating power — the conflicting demands and increasingly uncertain rains make it unclear how much more hydropower can be produced.

López Obrador, a native of the oil-producing Gulf coast state of Tabasco has made his main push in promoting fossil fuels; his administration is focused on building or acquiring new oil refinery capacity.

The statement came ahead of a United Nations climate conference in Glasgow, Scotland, at the end of the month.

López Obrador submitted a bill earlier this month that would cancel contracts under which 34 private plants sell power into the national grid. The plan declares “illegal” another 239 private plants that sell energy direct to corporate clients in Mexico. Almost all of those plants are renewable or natural-gas fired.

It puts private natural gas plants almost last in line — ahead of only government coal-fired plants — for rights to sell electricity into the grid, despite the fact they produce power about 24% more cheaply. Government-run plants that burn dirty fuel oil would have preference over private wind and solar plants.

It guarantees the government electrical utility a market share of “at least” 54%.

Amazon announced 18 new utility-scale wind and solar energy projects across the U.S., Finland, Germany, Italy, Spain, and the U.K., totaling 5.6 gigawatts (GW) of procured capacity to date in 2021. Amazon now has 274 renewable energy projects globally and is on a path to power 100% of its business operations with renewable energy by 2025—five years earlier than its original 2030 commitment.
ARIZONA STATE・17 HOURS AGO
The Independent

The UK government is being taken to court over its funding of a controversial gas project in Mozambique.The huge development in Cabo Delgado has been branded a “climate-wrecking gas mega-project” by the environmental group Friends of the Earth, which is bringing the case to the High Court on Tuesday.The liquefied natural gas plant, run by French energy giant Total, could emit up to 4.5 billion tonnes of greenhouse gases over its lifetime – more than the combined annual emissions of all 27 EU countries, according to a Friends of the Earth report. The organisation claims more than £850 million in...
ENERGY INDUSTRY・9 HOURS AGO
Fox News

President Biden is the kind of man who deliberately would steer his car into a ditch, crawl from the wreckage, and then probe the ditch for criminal conduct. Such nonsense mirrors Biden’s recent instructions to the Federal Trade Commission to indulge his fanciful conspiracy theory: the U.S. petroleum industry's plots and plans have fueled vertiginous rises in energy prices. Citing "mounting evidence of anti-consumer behavior by oil-and-gas companies," Biden told the FTC to "bring all of the Commission’s tools to bear if you uncover any wrongdoing."
PRESIDENTIAL ELECTION・2 DAYS AGO
Dallas News

As the rest of Texas frets about power outages, Denton adds Bitcoin mining to the grid

This op-ed is part of a series published by The Dallas Morning News Opinion section to explore ideas and policies for strengthening electric reliability. Find the full series here: Keeping the Lights On. Centuries after the “Emperor’s New Clothes” first appeared as a cautionary fairy tale, the city of Denton...
TEXAS STATE・2 DAYS AGO

Banning US oil exports would be a 'gift to OPEC and Putin,' Big Oil CEO says

New York (CNN Business) — President Joe Biden has already launched the biggest intervention into energy markets in a decade. Big Oil is nervous he's not nearly done yet. For weeks, Democrats have been calling for Biden to go even further than releasing strategic oil reserves by banning US oil companies from shipping oil overseas. Despite pressure from lawmakers in his party, Biden has so far refrained from taking the more extreme step of banning oil exports. A spokesperson from the White House declined to comment.
ENERGY INDUSTRY・3 DAYS AGO
weareiowa.com

The city of Perry has two renewable energy projects meant to help them reach their sustainable goals. One project will fully supply energy to 10 city buildings.
PERRY, IA・3 DAYS AGO
houmatimes.com

Chet Morrison Contractors, LLC (Morrison), a leading energy service company for the oil and gas industry, has announced the hiring of Kirk Meche as Director of Renewable Energy. With more than three decades of experience as a thought-leader in the energy industry, Meche is responsible for propelling expansion into the wind and renewables sector. Meche has gained national attention for his role in pioneering the entrance of oil and gas fabricators into the wind energy business.
ENERGY INDUSTRY・3 DAYS AGO
Connecticut Mirror

If we do nothing, frigid temperatures could be like kryptonite on our grid and leave Connecticut residents in the dark
HARTFORD COUNTY, CT・4 DAYS AGO

Rep. Kathy Rapp, R-Warren, wants solar panels and wind turbines installed in Pennsylvania to be taken down responsibly. House Bill 2104, which Rapp introduced recently in the state House of Representatives, would require companies installing alternative energy equipment be responsible to take the equipment down no later than 18 months after the facility has stopped producing electricity.
WARREN, PA・4 DAYS AGO
Neowin

Amazon is scaling up its wind and solar energy projects across the U.S. and Europe

On Wednesday, Amazon announced that it is adding 18 new utility-scale wind and solar energy projects to its renewable portfolio. It said the sites will be in the U.S., Finland, Germany, Italy, Spain, and the UK and will add 2 GW of additional energy capacity. Earlier this year, the company...
ENERGY INDUSTRY・5 DAYS AGO
progressivegrocer.com

Taking another step in its goal of powering 100% of its business operations with renewable energy by 2025, Amazon announced several new utility-scale wind and solar projects around the world, including eight in the U.S. The global projects will help power Amazon’s corporate offices, fulfillment centers and data centers. According...
ENERGY INDUSTRY・6 DAYS AGO
rdrnews.com

The business and landowners behind a planned community solar project will try again to obtain a permit to allow for a solar installation west of the city limits. Chaves Solar II LLC and property owners Jerrod and Melissa Higgins have filed an appeal of an Oct. 19 decision by the Roswell-Chaves County Extraterritorial Zoning Commission to reject a special use permit that would allow a “community solar garden” on about 25 acres on West Pine Lodge Road near the Roswell Relief Route.
ROSWELL, NM・6 DAYS AGO
NOLA.com

Winds of Change: How the Gulf of Mexico could be the next offshore wind powerhouse

In this multi-part series, The Times-Picayune | The New Orleans Advocate takes in-depth look at the economic and energy-producing potential of offshore wind in the Gulf of Mexico. Our journalists traveled to Rhode Island to explore how several companies in Louisiana's oil and gas industry helped build the country's first...
NEW ORLEANS, LA・9 DAYS AGO
WOWK 13 News

CHARLESTON, WV (AP) – FirstEnergy Corp. has applied to build five solar energy projects throughout its West Virginia service territory. If approved by West Virginia regulators, the company estimates that the projects would generate 50 megawatts of electricity. The plans comply with a 2020 bill passed by the state legislature that permits electric utilities to […]
CHARLESTON, WV・10 DAYS AGO
pv-magazine.com

German wave energy technology company Sinn Power GmbH has unveiled its first floating ocean ‘hybrid' platform, that combines wave, wind and solar energy. The floating structure is hosting 80 kW of solar modules and was deployed in Heraklion, on the Greek island of Crete. It. is claimed to withstand 12m-high...
ENERGY INDUSTRY・12 DAYS AGO
Napa Valley Register

Community solar can expand access to renewables for all Californians

Important issues central to economic and environmental justice are at stake as the Public Utility Commission debates the future of rooftop solar in California. Equal access to solar energy and equity in the clean energy economy for everyone must be the goal, as well as a cost-structure that is fair to all ratepayers.
CALIFORNIA STATE・12 DAYS AGO
gmauthority.com

General Motors has raised concerns over a new renewable energy proposal in Mexico that would give priority to the state-run power utility over private players. General Motors Mexico CEO Francisco Garza participated in a panel in Mexico City last week addressing the energy proposal, Reuters reports, with Garza expressing concerns that the law would prevent it from being able to invest in renewable energy sources at its automotive assembly plants.
ENERGY INDUSTRY・14 DAYS AGO
NBC News

Corporations are turning to forest credits in the race to go 'carbon-neutral.' Advocates worry about 'greenwashing.'

This article was produced in partnership with the Pulitzer Center’s Rainforest Investigations Network. In the forests of Guatemala, China and Scotland, oil giant Royal Dutch Shell is planting tens of thousands of trees that suck greenhouse gas out of the air, allowing customers who buy its fuel to claim their driving is carbon-neutral — at least on paper.
ENVIRONMENT・1 DAY AGO
KAMR Local 4 News and Fox 14 News

EL PASO, Texas (KTSM) – The Electric Reliability Council of Texas (ERCOT) has announced that by the end of this month, they’ll have inspected more than 300 power generation plants. Including natural gas, nuclear, coal, wind, and solar generation plants. This as ERCOT moves to make sure the power grid in Texas is prepared for […]
EL PASO, TX・1 DAY AGO
USA TODAY

Corn may temporarily store carbon, but it's mostly returned to the atmosphere within a short time. Solar panels support long-term emission reductions.
ENERGY INDUSTRY・3 DAYS AGO