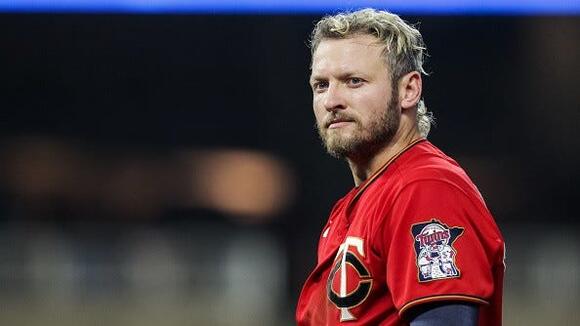 Josh Donaldson has been following his former team rather closely this October and the former Atlanta Braves slugger and current Minnesota Twins third baseman had some thoughts about Tuesday’s Game 3 NLCS against the Los Angeles Dodgers.

Donaldson was live-tweeting during the game and began to tear into the Dodgers and their defensive alignment in the top of the fourth inning when Gavin Lux — an infielder playing center field — misjudged a fly ball at the warning track to set up second and third and one out for the Braves.

Donaldson mocked the Dodgers and their analytics team for putting Lux in center field, whose mishap (it was ruled a hit, although Lux should have caught it) led to a four-run inning for the Braves as they took a 4-2 lead.

Lux appeared as if he had lost the ball in the sun, which Donaldson noted later when he ripped Major League Baseball for its early afternoon start time for a game on the West Coast.

Donaldson seemed to be pulling for his former team throughout the game and was commending the performance of Charlie Morton, who joined the Braves after Donaldson left.

He did take more shots at the Dodgers (and TBS announcers, by the way) calling them out on their pitching strategy for the series.

In fairness, the Dodgers burned ace Max Scherzer so he could close out Game 5 of the NLCS, but the Dodgers have one of the deepest teams and rotations in baseball.

The decision to play Lux in center field will likely be most criticized should the Dodgers lose the series. The 23-year-old has only played in the outfield 17 times in his career, and six of those came in center field with his first coming just last month.

In fact, Lux actually had a scary collision with the outfield wall at the end of September. But with Corey Seager, Trea Turner and Justin Turner manning the infield, it’s been hard to find spots to get Lux into the lineup.

What you never made mistakes playing baseball, you think your perfect. You see we are Dodgers Fans wether we win or lose we always have our chin up and our heads high. So you see we still win either way. We are Ruthless Die Hard Dodgers Fans.

Part of what he says is , Lux an infielder in the outfield. Roberts has done that all season. The Dodgers have the best first baseman in the MLB, Bellinger, playing in the outfield. There are many other examples of Dodgers playing at their normal position. And don't get me started on his use of pitchers and relief. Unthinkable.Of course, it would help of LA would be consistent in their hitting. Feast or....you know the rest.

There is plenty of interest in the list of big-name free agent shortstops, but what about one of the teams at risk of losing one of those players?. The Los Angeles Dodgers may have an opening at shortstop, as Corey Seager is among the highly-touted free agents on the market. The Dodgers are trying to bring back Seager, according to Jon Heyman of MLB Network, but are not showing interest in any other shortstops.
NFL・11 DAYS AGO
Yardbarker

From 1995 to 2012, Chipper Jones was the face of the Braves, bringing the organization a World Series and an MVP award. It was a somber day for Braves fans when he finally hung it up, but Jones knew he was leaving the organization in good hands, passing the torch to Freddie Freeman, and it’s remarkable how similar their careers have been thus far.
MLB・23 DAYS AGO
FanSided

Free agent Freddie Freeman’s latest Instagram post sure sounded like goodbye to Atlanta Braves fans, even if it wasn’t. If this isn’t goodbye, then Freeman owes fans an explanation because…what the hell?. The greater likelihood is that Freeman is trying to thank Braves fans for a wonderful season, in which...
MLB・26 DAYS AGO
ClutchPoints

Mark Berman, of Fox 26 Houston, got an inside scoop on who has reached out to Carlos Correa and his agent. According to Berman, Correa’s agent has heard from the New York Yankees, Boston Red Sox, Los Angeles Dodgers, Chicago Cubs, and the Atlanta Braves. It would make sense for...
MLB・2 DAYS AGO

There’s not much the Los Angeles Dodgers need to do in the off-season. When you have a team of Mookie Betts, Cody Bellinger, Julio Urias, Walker Buehler, and others, it’s tough to make additions that will help your team. At the end of the day, the best can always get better and that’s certainly what the Dodgers will look to do this offseason.
NFL・13 DAYS AGO
Inside The Dodgers

Could he be going back to Cali?
MLB・1 DAY AGO
sportstalkatl.com

As MLB Trade Rumors reported it, the Braves coughed up a lot of money for one of the only viable options at catcher on the free-agent market:. According to their sources, the Marlins were in on new Braves catcher Manny Pina before the Braves doubled the money Miami offered:. Pina...
MLB・16 HOURS AGO
The Spun

The Los Angeles Dodgers have been fairly quiet this offseason. That is, until now. MLB insider Ken Rosenthal of The Athletic is reporting that Chris Taylor and the Dodgers are in agreement on a new contract. Taylor’s new deal with the Dodgers will be official as long as he passes his physical.
MLB・2 DAYS AGO

A familiar name is back on the market. The Orange County Register reports the Los Angeles Dodgers designated outfielder Billy McKinney for assignment last week. MLB clubs faced a Friday deadline to set their 40-man rosters ahead of next month’s Rule 5 Draft. If McKinney passes through waivers, he could...
MLB・11 DAYS AGO
Sportsnaut

Our MLB Games Today schedule will be back with the new season. Yet, swipe down for our MLB offseason schedule
NFL・11 DAYS AGO
thinkbluepc.com

We are in full lockdown mode now, since the MLB lockdown was made official on Wednesday. You may have seen all through Twitter how lonely the MLB website looks, and how all the profile pictures of players have been removed. The last moves the Dodgers made before the lockdown we’re...
MLB・12 HOURS AGO
CBS Sports

The collective bargaining agreement between Major League Baseball's owners and the players is set to expire on Wednesday night. It is assumed an agreement won't be reached in the coming days, meaning free agency and trade talk will be completely shut down and a lockout will be put in place. In the meantime, perhaps there will be a flurry of moves, as there might be some players who don't want to go several weeks (months?) without knowing where they'll play in 2022.
MLB・5 DAYS AGO

Several players have taken to thanking fans and reflecting fondly on the past season in the time since the Los Angeles Dodgers were eliminated by the Atlanta Braves in the National League Championship Series, and Max Muncy became the latest the join the group. Muncy not only thanked fans for their endless support throughout the year, he praised the Dodgers for their accomplishments and expressed how difficult it was for him to miss the postseason because of a left elbow injury.
MLB・12 DAYS AGO
dodgerblue.com

Despite the 2020 Major League Baseball season being shortened and played without fans due to the coronavirus (COVID-19) pandemic, the value of teams continued to soar. According to Forbes, team values increased to an all-time high average of $1.9 billion this year, which is up 3% from the previous year.
MLB・11 DAYS AGO
Minneapolis Star Tribune

Arbitration eligible (estimates) 10 players at major league minimum:$5.75 million **. * — Minaya and Arraez don't have three years of service time required for salary arbitration, but may qualify as "super-twos," among the top 22% of players with more than two years but less than three and who are also allowed to file for arbitration. Minaya is likely to qualify, and Arraez might; if they do not, their salaries will be much closer to the MLB minimum.
MLB・11 DAYS AGO
Dodgers Nation

Andrew Friedman is always looking for ways to upgrade the Dodgers roster whether it be through signing free agents in the offseason or finding diamonds in the rough that were cast off by their former teams. He’s also been known to finesse teams through the trade market from time to time. One memorable trade was the one pulled off with the Cincinnati Reds.
NFL・12 DAYS AGO
dodgerblue.com

The Los Angeles Dodgers extended the $18.4 million qualifying offer for the 2022 season to Corey Seager and Chris Taylor ahead of the deadline but as expected, both players declined it in favor of proceeding with free agency. Since the qualifying offer was implemented in 2012, only 11 of 110...
MLB・10 DAYS AGO
bardown.com

This past off-season, it seems as if Josh Donaldson has been doing a little tour of the Greater Toronto Area as he has been now spotted twice in two pretty random locations within the past few weeks. First seen rocking some hockey gear and some Leafs threads, the Bringer of...
MLB・13 DAYS AGO
Dodger Insider

The Los Angeles Dodgers saw 11 players reach free agency the morning after the World Series concluded, including Clayton Kershaw, who has spent his entire career with the organization since being selected in the first round of the 2006 MLB Draft. The left-hander was plagued by injuries this past season, but still pitched to a solid 3.55 ERA, 3.00 FIP and 1.02 WHIP with 144 strikeouts against 21 walks in 121.2 innings.
MLB・6 DAYS AGO