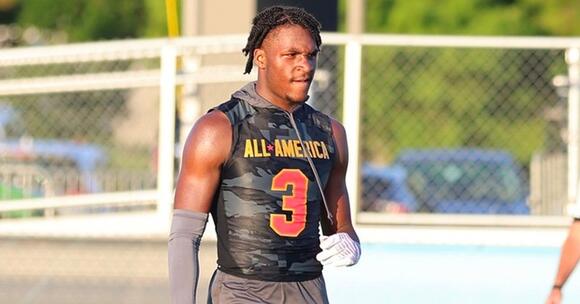 One of the top receivers left on the board for Georgia Luther Burden has made his college decision.

The East St. Louis, Illinois product ranks as the number two receiver in the class by 247Sports' player composite rankings, making Burden the sixth-best player overall in the country.

The five-star came down to Missouri and Georgia after being a one-time commit to the Oklahoma Sooners. Burden committed to the Sooners in October of 2020 before backing off his pledge this past August.

Burden announced Tuesday evening that he'll be staying close to home and committing to Missouri.

Burden is the No. 2 overall wide receiver in the 2022 class, according to SI All-American. Here's what they had to say about Burden:

Built with a big, strong frame, Burden plays bigger than the above-average listing on tape. He is a complete and classic WR1 prospect with the size and overall athleticism to challenge the edge and depth of a secondary. The former OU pledge is masterful at the high point and on contested catches, with great physicality at the point, but he offers a counter to his game as an after-the-catch player with great vision and moves in space. The bigger-bodied prospect has better top-end speed than his size would indicate, a feature that pairs nicely with his ability to take an efficient and controlled path towards where the ball will eventually be. It also factors into the return game and allows him to use the extremes of the route tree to keep cover corners honest.

Scouting Report: Who is Aliou Bah?

ESPN college football analyst Paul Finebaum was not surprised by Florida’s decision to fire head coach Dan Mullen on Sunday. The Gators officially announced the decision on Sunday, with one game in the regular season remaining. Finebaum admitted that things had gotten “toxic” for the major program. “Well, he had...
COLLEGE SPORTS・15 DAYS AGO
AOL Corp

You can reportedly add another notable name to the college football head coach firing list. According to a report from Yahoo! Sports college football insider Pete Thamel, the Washington Huskies are expected to fire head coach Jimmy Lake. Lake, 44, is currently suspended for shoving and hitting current linebacker Ruperake...
COLLEGE SPORTS・22 DAYS AGO

The 2021 college football season is starting to wind down, with only a few games left on the regular season schedule. With conference title games only a few weeks away, every game is that much more important for teams hoping to make the College Football Playoff. On Saturday morning, ESPN’s Lee Corso gave an updated look at his playoff teams right now.
COLLEGE SPORTS・23 DAYS AGO
Larry Brown Sports

The Ohio State Buckeyes appear to be hitting their stride at the right time, and coach Ryan Day wants his biggest rival to know it. The Buckeyes throttled the Michigan State Spartans 56-7 on Saturday, turning a clash of top ten teams into an uncompetitive blowout. Ohio State jumped out to a 49-0 lead before halftime, and quarterback C.J. Stroud asserted his Heisman Trophy credentials by throwing for 432 yards and six touchdowns.
MICHIGAN STATE・16 DAYS AGO
On3.com

Alabama quarterback Bryce Young added a new NIL deal to his growing list, and this time it involves food. The Crimson Tide star announced he has partnered with Subway, and he now has his own sub. “The Tuscaloosa” is composed of steak, bacon, Monterey cheddar cheese and chipotle sauce. “A...
NFL・17 DAYS AGO
The Oklahoman

NORMAN — Brent Venables barely had time to breathe on Sunday. He finalized a deal to become Oklahoma's next head football coach. He arrived on a private plane in Norman at around 10 p.m. to see more than 1,000 Sooner fans waiting near the tarmac. He then had a triple cheeseburger and onion rings at...
NORMAN, OK・12 HOURS AGO

What Deion Sanders said after sons won title, hugged him in wheelchair (video)

All of the noise ceased for three hours. To end a week where reports surfaced Jackson State football coach Deion Sanders impressed at an interview with TCU, Sanders returned to the sideline to coach the Tigers to a SWAC East division championship on Nov. 13, 2021. Jackson State (9-1, 7-0 SWAC) defeated Southern University (4-6, 3-4) 21-17 after trailing 17-7 in the fourth quarter.
FOOTBALL・22 DAYS AGO
ClutchPoints

Luke Fickell is having an outstanding season at Cincinnati that could culminate with a trip to the College Football Playoff. In the meantime, the head coach has been mentioned as a potential candidate for some much bigger jobs than the one he has with the Bearcats. He may be interested in at least one of them.
CINCINNATI, OH・12 DAYS AGO
The Spun

Where will Alabama come in on Tuesday night in the new College Football Playoff selection committee rankings?. The Crimson Tide improved to 11-1 on Saturday with a thrilling overtime victory over Auburn in the Iron Bowl. However, Alabama dropped in the latest Associated Press top 25 poll. The Crimson Tide...
ALABAMA STATE・8 DAYS AGO

Canzano: Oregon Ducks football has only two choices after the departure of Mario Cristobal

I don’t blame Mario Cristobal for wanting to go home. But I will fault the University of Oregon if it ignores the lesson he’s trying to teach it about the strength of roots and the power of opportunity. The Ducks football coach informed his team on Monday morning that he’s...
COLLEGE SPORTS・15 HOURS AGO
Los Angeles Times

Here's who is joining Lincoln Riley's coaching staff at USC

Georgia Football coverage presented by — Oklahoma has lost another recruit in the wake of Lincoln Riley’s departure for USC. On Sunday evening, Brandon Inniss, considered the No. 9 recruit in the class of 2023 and the No. 1 wide receiver recruit in the nation, announced that he was backing off his pledge to Oklahoma after committing there in August. Now, Treyaun Webb, ranked by 247Sports as the No. 5 running back in the class of 2023, has followed suit, posting the news on his Twitter account.
GEORGIA STATE・8 DAYS AGO
The Spun

We’ve reached the end of the 2021 college football regular season and the carousel of coaches and players has already begun. But while Lincoln Riley leaving Oklahoma for USC might be the most-high profile coaching move, another Big 12 move could have major implications this offseason. According to Woody Wommack...
COLLEGE SPORTS・7 DAYS AGO

John Metchie III played a phenomenal game in the Iron Bowl. One of the best iterations of the legendary rivalry will always feature him with a singular, everlasting image — Metchie shushing the crowd after scoring the game-winning two-point conversion. Instead of adding more fuel to the fire, Metchie III...
ALABAMA STATE・8 DAYS AGO
On3.com

When news broke that Brian Kelly was leaving Notre Dame for LSU, Fighting Irish players took to Twitter with some thoughts. Star safety Kyle Hamilton was one of them, and he clarified his post on the “Inside The Garage” podcast Monday night. Hamilton tweeted a picture of him, his brother...
NFL・6 DAYS AGO
The Spun

On Friday afternoon, the Nebraska Cornhuskers hosted the Iowa Hawkeyes in a matchup of Big Ten West programs. Early on, it looked like Nebraska would finally end the season on a high note. The Huskers jumped out to a 21-6 lead in the second half and looked to be en route to a comfortable win.
NEBRASKA STATE・10 DAYS AGO
Sports Illustrated

Report: Brian Kelly Will Return to Notre Dame Next Season Despite Speculation

It's late in the college football season, which means that there are plenty of rumors regarding whether Notre Dame head coach Brian Kelly will be sticking around in South Bend next year. It looks like he'll be giving it another go. Dennis Dodd of CBS Sports reports that Kelly will...
NOTRE DAME, IN・16 DAYS AGO