After a year-and-a-half, the Blackhawks welcome a full capacity of fans back for a regular season game 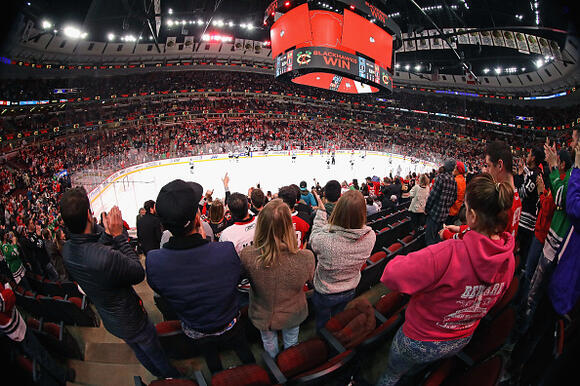 CHICAGO – One of the great things about the Blackhawks’ dynasty run of the 2010s was the fact that the fanbase played such a major part in making the United Center a true home.

Sellout crowds greeted the home team while also making it difficult for the visitors as the team won a trio of Stanley Cups in six years. A mix of traditional fans who told stories of Chicago Stadium along with a new wave of supporters attracted by the new era of the team made the United Center one of the toughest, if not the toughest venue in the NHL.

That advantage was taken away in 2021 as it was in most cities in the league thanks to the COVID-19 pandemic. Only in the final few home games were any fans allowed to watch the team, and even then, it was only a limited amount.

Tuesday night that finally changes, as the Blackhawks welcome a full house to the United Center to start of the home part of their 2021-2022 schedule.

Jeremy Colliton’s team hosts the Islanders in their first of 41 regular season games at the United Center this evening. It makes the first time the team has had full capacity for a game that counted in the standings since March 11, 2020 when they beat the San Jose Sharks 6-2.

The league was shutdown due to the pandemic the next day, and in 2021 the Blackhawks played in front of no fans for the majority of their 56-game schedule.

“I think we’ve looking forward to it for over a year, right?” said head coach Jeremy Colliton of having the fans back. “To be back in this building at the atmosphere that comes with it and the energy we can get from it.”

Beyond the year-and-a-half wait for fans, the team is eager to get a bit of a sluggish start to the season out of their system. The Blackhawks have trailed to start each of their first three games on the road and were only able to recover to get one point out of those contests.

That includes allowing three first period goals in a loss in the season opener against the Avalanche then four scores in Saturday’s loss to the Penguins. Perhaps having the crowd behind them again will help the Blackhawks find a way to start quickly for the first time this season.

“It’s upto us to use it by having a good start, because that can go either way,” said Colliton of the energy from the home fans. “We want to make sure we’re ready from puck drop and having some solid shifts and skating and getting pucks in, get on the forecheck, and we can build from there.”

At least they’ll have the fans by their side to do so.

CALGARY – They entered this swing to the Pacific Northwest and Canada playing their best hockey of the very young 2021-2022 season, and that continued at times during a four-game stretch away from home. But through their four-game trip, the strong stretch under interim head coach Derek King cooled just a little bit, as the […]
NHL・3 DAYS AGO
WGN News

THE MORNING AFTER: Emotions flow, but in the end, the same challenge is ahead for the Bears

DETROIT – A lead-up to a match-up of two teams near the bottom of the NFC never had so much emotion. There was a report, denials, reactions, then more reports and denials. Ahead of a major holiday, a job appeared to hang in the balance with a change affecting many others potentially ready to go […]
NFL・1 DAY AGO
WGN News

Blackhawks held settlement talks in early November after the investigation’s findings were released, meeting for about an hour.
CHICAGO, IL・4 DAYS AGO
Daily Herald

A look at how Blackhawks' Toews is faring after 15 games

As Jonathan Toews was wrapping up his postgame presser after the Blackhawks' 2-1 victory over Arizona on Friday, three questions were posed about the state of his game. His answers comprised of 29 words -- in total. • How do you feel about your game? "Not terrible. But room for improvement,...
NHL・13 DAYS AGO

After rough start to season, Blackhawks' Fleury seems to settling in

When Marc-Andre Fleury was traded from Vegas to the Blackhawks last off-season, it not only sent shock waves through the NHL, but it also shook the veteran goaltender to the core. Fleury and his family loved Vegas. They made a home there and were deeply involved in the community. Starting...
NHL・10 DAYS AGO
Chicago Tribune

Jonathan Toews — mired in a 20-game goal-scoring drought — took a rare day off from practice Saturday. Is the Chicago Blackhawks center’s workload affecting his offense?

Jonathan Toews did an unusual thing Saturday: He took a break. The Chicago Blackhawks center took a maintenance day while teammates practiced at Fifth Third Arena, his first such day this month after taking three in October. “He’s been around, he knows his body,” interim coach Derek King said. “I just had a conversation with him, and I know he tires. “I just said, if you need a maintenance day ...
NHL・14 HOURS AGO
NESN

Brad Marchand Details What Bruins ‘Have To Build’ This Season

Members of the Boston Bruins will be the first to say it. They have not responded to the best of their potential in every game this year. “There’s been a few games this year where we had the lead or we were tied and and we kind of let it slip away from us,” assistant captain Brad Marchand admitted to reporters Saturday.
NHL・14 DAYS AGO
Yardbarker

It seemed like a pretty comical moment towards the end of the New York Rangers 5-2 win over the Boston Bruins. Artemi Panarin and Bruins super-pest Brad Marchand were jawing at each other. The confrontation ended with Panarin throwing his glove at Marchand. ABC commentator, AJ Mleczko was in between the benches when the altercation took place. “I don’t mean to laugh,” she said. “It is heated and intense.”
NHL・1 DAY AGO

John Tavares, Auston Matthews and Pierre Engvall each had a goal and an assist for the visiting Toronto Maple Leafs
NHL・2 DAYS AGO
Sportsnaut

CEDAR FALLS, Iowa – UNI football will host its final, regular-season game against Western Illinois at 1 p.m. Saturday. It will be Senior Day for the Panthers. It will also be the final game for Panthers Sports Radio Network play-by-play announcer Gary Rima. Rima has been the voice of the Panthers for nearly 30 years. He is synonymous with some of the greatest highlights in UNI Panther football history.
CEDAR FALLS, IA・9 DAYS AGO
Sportsnaut

New York Rangers forward Artemi Panarin was fined $5,000 by the NHL on Saturday morning for unsportsmanlike conduct. Panarin was
NHL・18 HOURS AGO
WNCT

KINSTON, N.C. – The Down East Wood Ducks have announced the first pitch times for their 66 home games in 2022. Similar to 2021, Tuesday – Friday games will start at 7 p.m. and Sunday games are scheduled for 1 p.m. starts.  Saturdays are now slated for 5 p.m. with Monday being a league-wide off […]
KINSTON, NC・12 DAYS AGO
Minneapolis Star Tribune

TAMPA, Fla. — The NHL Department of Player Safety fined Wild center Ryan Hartman the maximum amount allowable under the Collective Bargaining Agreement for an infraction in Sunday's 5-4 overtime loss to Tampa Bay. Hartman was fined $4,250 for slew-footing the Lightning's Ross Colton. Slew footing is when a player...
NHL・5 DAYS AGO
ABCNY

New York Islanders games have been postponed through at least Tuesday due to COVID cases, according to the NHL.
NHL・14 HOURS AGO
videtteonline.com

Western Kentucky has added an additional regular-season home men's basketball game to its 2021-22 schedule. The Hilltoppers will host Rhodes College at 7 p.m. Nov. 30 at E.A. Diddle Arena. TV information is still to be determined. The game will be a part of season ticket packages, and game tickets...
COLLEGE SPORTS・11 DAYS AGO
ysusports.com

Penguins Welcome Back Fans to Beeghly Center on Monday vs. Akron

Date & Time Monday, Nov. 15 | 7 p.m. Youngstown State will play in front of fans at Beeghly Center for the first time in 631 days as it hosts Akron on Monday. The battle of nearby rivals will tip at 7 p.m., and it will be broadcast live on 570 WKBN, iHeartRadio and ESPN+.
AKRON, OH・14 DAYS AGO