BOSTON (CBS) — One of the Red Sox’s youngest fans stole the show at Fenway Park on Monday night. Five-month-old Giovanni, who is now known as “Fenway Baby,” had fans cheering.

Mom Kaitlyn and Dad Antonio Cali say this wasn’t baby Giovanni’s first game, but it was the most memorable so far.

“We’re dancing and we just held him up like, ‘hey, here’s my cute baby, we’re dancing’ they showed him on the jumbotron and the whole entire stadium was like yeah!” said Kaitlyn. 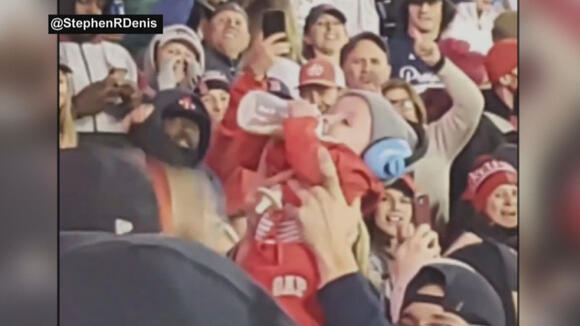 The crowd went so wild that baby Giovanni’s dance moves even grabbed the attention of players on the field.

“I know at one point, Hunter Renfroe had to look back in the crowd to see what was going on. And when he looked back it was just me holding the baby,” said Antonio.

But fans wanted more and cheered for baby Giovanni to return to the jumbotron.

“They did it like four or five times and the place was going wild for him,” said Kaitlyn.

The family said they never expected their night out to turn into such a wild experience.

“People were talking to us, ‘oh the baby is on Twitter, is on Instagram,’ there was a radio station talking about him. So he’s now the Fenway Baby,” said Antonio.

Antonio said he is excited to raise his son as a Red Sox and they hope to be back in the stands soon.

The New York Yankees seemingly have been tied to each free agent this offseason, but reportedly got one of their guys Monday. The Yankees signed former Boston Red Sox shortstop José Peraza to a minor league deal, according to Dan Martin of the New York Post. Peraza has bounced around...
MLB・3 DAYS AGO
Tv20detroit.com

A former Boston Red Sox player who helped the team win a World Series title in 2007 has died. According to ESPN Deportes and Dominican newspaper Diario Libre, former shortstop Julio Lugo died of an apparent heart attack on Monday. Lugo's sister, Rina Lugo, told the sports outlet that her...
MLB・17 DAYS AGO
Boston

One of MLB’s fastest players — if not the fastest — is coming to Boston. The Red Sox announced Friday afternoon that they had claimed speedster outfielder Tim Locastro off waivers from the New York Yankees. Locastro, a 29-year-old who has played with Los Angeles Dodgers, Arizona Diamondbacks, and Yankees,...
MLB・27 DAYS AGO
NBC Sports

There are 1,200 major-leaguers. If you were to rank them all based on the likelihood of the Red Sox acquiring them, Jackie Bradley Jr. might have been right at the bottom of the list. Yet less than 30 minutes before the start of baseball’s first work stoppage in 26 years,...
MLB・17 HOURS AGO
FanSided

The Boston Red Sox continued to add to their organizational depth, signing former Detroit first-round pick Christin Stewart to a minor-league deal with an invitation to big-league camp.
MLB・2 DAYS AGO
985thesportshub.com

Steven Matz will not be taking his talents to Boston, as the St. Louis Cardinals have outbid the field and signed the lefty to a four-year deal worth up to $48 million, according to ESPN’s Jeff Passan. The Matz decision, which was always expected to come before Thanksgiving, came on...
MLB・8 DAYS AGO

The New York Mets are skimming the free-agent pool, and one name that could make sense would be Steven Matz. Ironically, the 30-year-old pitcher is the same guy the Mets traded to the Toronto Blue Jays last winter. A reunion between the Mets and Matz would make sense considering the...
MLB・13 DAYS AGO
NESN

The Boston Red Sox will be letting Garrett Richards and Martín Pérez return to the free agent market. Both players had their team options declined for the 2022 season, making them free agents. MassLive’s Chris Cotillo had the news on Richards, and The Boston Globe’s Alex Speier reported the Pérez decision.
NFL・25 DAYS AGO
Bleacher Report

Kyle Schwarber's time with the Boston Red Sox may be coming to an end. The slugger had a mutual option on his contract for the 2022 season that ESPN reported was worth $11.5 million with a $3 million buyout, but he declined his option on Thursday. However, he could still...
MLB・27 DAYS AGO
The Spun

The Boston Red Sox lost a key member of their rotation earlier this offseason, as Eduardo Rodriguez agreed to a five-year deal worth $77 million with the Detroit Tigers. On Friday, the front office found a free agent who can potentially take Rodriguez’s spot in the rotation. According to ESPN...
MLB・6 DAYS AGO

Mark Berman, of Fox 26 Houston, got an inside scoop on who has reached out to Carlos Correa and his agent. According to Berman, Correa’s agent has heard from the New York Yankees, Boston Red Sox, Los Angeles Dodgers, Chicago Cubs, and the Atlanta Braves. It would make sense for...
MLB・22 HOURS AGO
WEEI Sports Radio

The Boston Red Sox made their decisions on which players they were going to add to the 40-man roster. The strategy left three spots open, while exposing some intriguing names to the Rule 5 Draft.
MLB・12 DAYS AGO
ClutchPoints

After a deep postseason run, the Boston Red Sox are looking to retool their pitcher rotation. While they already have great slingers like Chris Sale and Nathan Eovaldi, more pitching talent can’t hurt their chances. And based on who they’re aiming to get, they really are gunning for the best of the best in the league.
MLB・11 DAYS AGO
NECN

The Los Angeles Dodgers had Will Smith, Max Muncy, Justin Turner, Corey Seager, Trea Turner, Mookie Betts, Walker Buehler, Max Scherzer, Julio Urias and Kenley Jansen named among the nominees for the 2021 All-MLB Team. This is the third annual recognition for the top players, with winners being announced on...
MLB・22 DAYS AGO
survivinggrady.com

Why Do People Watch the Red Sox?

Red sox baseball fans have always had hit and miss seasons with their team never being consistent with results which have caused a lot of fans to stop watching the red sox due to poor performances. Baseball has been up and down over the past few seasons due to COVID putting a halt on most sports around the world. Now that baseball is back again, and fans can return to the grounds the sport is more popular than ever before. Some red sox fans are not that pleased to see their team back though due to them constantly underperforming in recent games over the course of the season. There are a lot of baseball fans that have started to watch the games from home due to them not wanting to travel far to see their teams potentially lose to then travel back home again. A lot of sports channels are now broadcasting live baseball games due to the popular demand of many fans. There are a lot of online platforms to watch the games from and some betting companies are even showing the games once you have placed a pre-match bet on your team, here are more options that are popular for baseball fans to use to place their bets or watch the games from.
MLB・13 DAYS AGO
theScore

Free-agent left-hander Rich Hill is interested in a reunion with the Boston Red Sox next season. "There is an interest, without a doubt," the veteran hurler told The Boston Globe's Alex Speier. "There's a need on the other end. (But) the need for starting pitching is very apparent throughout the league - not just in Boston. It's also many other clubs that need it."
MLB・7 DAYS AGO
Yardbarker

Seiya Suzuki, Japanese outfielder who Red Sox have ‘thoroughly’ scouted, to be posted next week (report)

Once posted, Suzuki would under normal circumstances have up to 30 days to negotiate with major-league clubs. However, because of the looming work stoppage, the 27-year-old and his representatives may only have until December 1 to talk with teams before the Collective Bargaining Agreement expires. Per The Athletic’s Andrew Baggarly,...
MLB・14 DAYS AGO