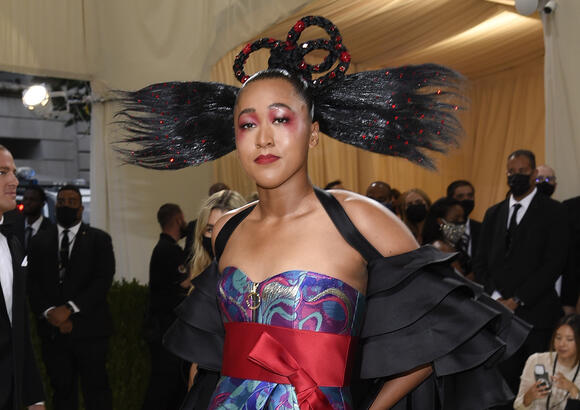 Tennis superstar Naomi Osaka has been winning big on and off the court. Osaka’s style always looks chic and comfortable in her go-to styles that include bold prints and earth-toned neutrals.

Here, a collection of some of Osaka’s moments embracing her signature look.

Osaka played in the Western and Southern Open and had all eyes on her, not just for her tennis skill but also her bold pattern choices. She wore a black and white pinstripe top with a peach tennis skirt, and her Nike sneakers displayed a bold cheetah print.

The four-time Grand Slam champion attended the 2019 US Open Tennis Tournament Fan Week in black calf-length leggings with a color-blocked windbreaker. Her Nike sneakers were just as bold with a neon orange upper and neon green and yellow midsole.

In 2019, the 23-year-old looked excited to throw the first pitch at the Los Angeles Dodgers game against the Los Angeles Angels. She supported the Dodgers wearing the team’s jersey and baseball cap, completing the look with black cutoff shorts and animal print Nike Air Max sneakers.

The tennis star is sponsored by Tag Heuer and attended the brand’s event in New York City on Aug. 26, 2021. Osaka wore a black satin dress with a camouflage jacket. She accessorized with a white Louis Vuitton bag and white Nike Blazer Mid 77 sneakers.

Osaka’s red carpet style still showcases the same love of bold prints and colors. Photographers captured her heading to the ESPY Awards on July 10, 2021 in a Louis Vuitton ensemble. The look consisted of a black and white striped top with wing sleeves and gold shoulder details. The skirt was a forest green pleated leather that was styled with black suede Manolo Blahnik pumps.

One of her most iconic looks this year was worn to the Met Gala . The theme was “In America: A Lexicon of Fashion” and the Japanese-Haitian athlete represented her heritage well. Osaka’s custom dress was designed by her sister Mari Osaka and Louis Vuitton. The multicolored print and red bow were modeled after a traditional Japanese kimono and the layered ruffled sleeves were an exaggerated design of a Haitian karabela dress. It was complete with boots with round studs.

Simone Biles makes smiley slippers chic. The four-time gold medal Olympian posed with French gymnast Melanie De Jesus Dos Santos while both wearing matching athleisure-wear that featured a gold stretch halter top and matching leggings. View this post on Instagram A post shared by Melanie De Jesus Dos Santos (@melanie_djds972) When it came down to the shoes, Biles sported a quirky pair of smiley face white slippers. Biles’ essential aesthetic consists of relaxed styles that align with her career and passions. Her personal tastes are on the pulse of being trendy while offering a comfy, efficient twist. Riddled throughout her Instagram feed are...
BEAUTY & FASHION・27 DAYS AGO
Footwear News

Serena Williams brightened up her fall style with a surprisingly summery look on “Jimmy Kimmel Live!” last week. The tennis pro sat down with the talk show host to discuss the upcoming film “King Richard” in bold attire. For the occasion, Williams modeled a new look from Versace’s fall ’21 collection that teamed a bright red crop top with a coordinating belted mini skirt. On her feet, the athlete added a glittering touch to her look with her choice of sandals. The square-toe silhouette featured dual crystal-coated straps and a tall stiletto heel. Square-toe footwear returned to the celebrity scene in 2019 and...
TENNIS・29 DAYS AGO
Footwear News

Selena Gomez looked ready for the cold weather today while shooting season 2 of Hulu’s “Only Murders in the Building.” While Gomez has been a fashion icon herself during her many years of stardom, her character in the show, Mabel Mora, has gained acclaim for her style moments in the debut season. The “Wizards of Waverly Place” alum stepped out on the set in a simple yet standout ensemble. The actress sported a pair of black trouser pants with a fitted upper and flared finish. On top, she layered an auburn cowl turtle neck sweater beneath a velvet black cape coat that...
BEAUTY & FASHION・9 HOURS AGO
Tennis World Usa

Four-time Grand Slam champion Naomi Osaka suggested Serena Willams was a victim of a double standard in the 2018 US Open final. The US Open final between Osaka and Williams was surrounded by controversy after the American got into a verbal altercation with chair umpire Carlos Ramos. The moment and...
TENNIS・10 DAYS AGO

The hottest date night spot as of late? Hanging courtside at a basketball game. On Sunday night, Naomi Osaka was spotted front row at the Clippers vs. Mavericks match in Los Angeles with her boyfriend and rapper Cordae. The court was the tennis player's runway as she stood out in a fashion-forward outfit consisting of a casual white button-down and a pair of funky sheer pants with velvet embroidered cuffs.
TENNIS・14 DAYS AGO
POPSUGAR

Naomi Osaka dyed her hair blond. This isn't the star's first time experimenting with her hair color. Celebrity hairstylist Martin-Christopher Harper is behind the look. Naomi Osaka is no stranger to switching up her hairstyles. Since her rise to superstardom, we've seen the athlete rock everything from red braids to a pink wig and has even accessorized with gems in her baby hairs. However, for the most part, she's remained consistent with her signature brunette curls, until now.
CELEBRITIES・1 DAY AGO
Gadget Flow

Tote any camera using the COOPH Rope Camera Strap. That’s right: it carries every camera with color. Keep your essential photography gadget close and ready to shoot with this collection. Handcrafted and made in Europe, these stylish yet durable rope straps feel great to wear. So you will enjoy having it around your neck or over your shoulder as you walk around on a photography adventure. Moreover, they have integrated protective leather flaps that ensure no camera is scratched in action. Furthermore, choose from colors ranging from Plaid Beige to Aqua and Aubergine to Silver Gray. Enjoy the genuine Italian vegetable-tanned leather details and the high-quality European climbing rope. Plus, you can choose from German steel rings or webbing bands for the ending. Finally, accessorize with your favorite color or match them to your outfit of the day.
4 DAYS AGO
News Talk 1490

LISTEN LIVE. LIKE US ON FACEBOOK. FOLLOW US ON TWITTER. Naomi Osaka is about to test the theories of blondes having more fun. And judging from her latest Instagram picture, she’s going to have a ball. The 24-year-old four-time Grand Slam singles champion showed off her latest hairdo, done by celebrity stylist Martin-Christopher Harper, while dressed in a silver metallic mini dress.
TENNIS・14 HOURS AGO

On November 28 news broke of cutting-edge designer Virgil Abloh's death from cancer at 41, just days before he was set to present his Spring/Summer 2022 collection for Louis Vuitton at an uptempo Miami-based show. Vuitton and Bernard Arnault, CEO of LVMH, decided to still present the collection as planned, presenting it under the title “Virgil was here.”
BEAUTY & FASHION・5 DAYS AGO
HOLAUSA

Naomi Osaka’s dream car is the girliest, most glamorous, and magical ride ever

The four-time Grand Slam champion and former world No.1 Naomi Osaka took social media to share her dream car — and to be honest; we want that ride too! The Haitian-Japanese athlete interacted with her fans on Instagram and answered questions about things she loves the most and...
CELEBRITIES・13 DAYS AGO
Allure

Simone Biles's Beachside Braids Might Be the Longest She's Ever Worn

Simone Biles loves wearing braids. Her love for the protective style is undeniable, especially considering that we've seen her wear both bohemian and curly box braids this year. The Olympic gymnast has once again shown her love for braids in a tropical destination in an undisclosed location. Biles has posted...
CELEBRITIES・7 DAYS AGO
Footwear News

Brigitte Macron wore nothing but neutrals while visiting the Jules Ferry School in Ormesson-sur-Marne in France. The French first lady was styled in her classic minimalist aesthetic from head to toe for the occasion. She kept herself warm with a double-breasted blue pea-coat and a matching scarf.  She sported blue skinny jeans, which she layered on top of a pair of suede pointed-toe boots. The 68-year-old visited the school to see the robotics systems that allow children with long-term illnesses to keep up with their schooling. When it comes to footwear, Macron is a big fan of fall boots. Last month, she was...
BEAUTY & FASHION・4 DAYS AGO
firstsportz.com

Zendaya brought new meaning to head-to-toe glam at the “Spider-Man: No Way Home” premiere in London. While hitting the red carpet with boyfriend Tom Holland (who plays Spider-Man in the film), the “Euphoria” star wore a bold statement blazer from Alexander McQueen’s Spring 2022 collection. The oversized gray style featured wide shoulders and large lapels, accented with black double-breasted buttons. The style was especially romantic from its dazzling crystal accents and embroidery, which encircled the blazers’ shoulders and left side with swinging pendants and sparkling strings as if layered in jewelry. Her stylist — and FNAA Style Influencer of the Year...
BEAUTY & FASHION・2 DAYS AGO
Footwear News

Chrissy Teigen dressed sharply in an all-black outfit while leaving New York City with husband John Legend and their children. While heading to the airport, Teigen wore a sleek black bandeau and leggings. The sporty styles, accessorized with a black baseball cap, created a sleek athletic look. The star also layered the set with a black leather motorcycle jacket, giving the athletic set a distinctly grungy edge. Teigen accessorized for travel with stud earrings and a pair of aviator sunglasses. For footwear, the “Cravings” author wore a pair of black Athletic Propulsion Labs sneakers. The unisex TechLoom Bliss style featured a slip-on...
BEAUTY & FASHION・1 DAY AGO
Footwear News

For many in the fashion world Virgil Abhol, 41, was a maverick, a fashion outsider who shot to fame for his headlining-making catwalks. Dubbed the “Karl Lagerfeld for millennials” he climbed from relative obscurity to the top of his game. He was down with the coolest kids, hanging out with best friend Kanye West, “crashing” fashion weeks, disrupting the industry and founding one of the world’s hippest streetwear brands, Off-White — a label which became as famous for its designer hoodies and t-shirts as its huge social media following. In 2018 he became the first African-American artistic director for French fashion house Louis Vuitton menswear.
BEAUTY & FASHION・8 DAYS AGO
Shawano Leader

Is there any hat style that blends with every occasion?

Hats off to those men who correctly mix and match their outfit with an appropriate hat. Conventionally, hats were for a functional drive. It was basically to shield people from the harsh rays of the sun and other climatic variations. The hat brim and the crown were for this particular purpose. Increasingly, hats have now become a fashion accessory that you can pair with your outfit. The combination of hats with outfits makes you appear stylish and fashion-forward. However, you must know the basics of styling yourself with a hat not to kill the purpose. Hats will not only help you deal with your bad hair day but work like your face disguise. They will take your style to another level. Hence, you must know the critical areas to select a headpiece with your taste and personality.
APPAREL・13 DAYS AGO
101.9 KELO-FM

Harry Styles just earned his “beauty mogul” title after launching his new company, Pleasing, but it appears he’s added yet another feather in his cap — that of NFT maker. VOGUE has the scoop. Last year, Harry turned heads when he wore a colorful patchwork JW Anderson cardigan and, since...
DESIGNERS & COLLECTIONS・7 DAYS AGO