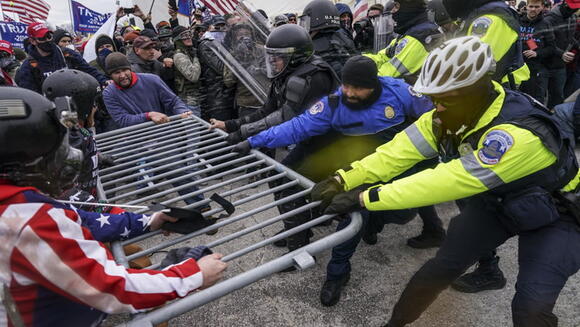 As the US Capitol was under siege on 6 January, about a dozen Republican senators hid in a storage closet – not from the intruders, a new report says, but from their Democratic colleagues.

According to a Washington Post interview with Senator Tommy Tuberville , the GOP lawmakers were already in a secure room when they decided to huddle in the closet. What they were seeking was not safety, but privacy, so they could plot their next move in light of the insurrection.

“You’ve got 25 seconds to call a play,” Mr Tuberville, a former football coach, recalled to the Post . “You can’t call a bunch of timeouts.”

For these senators, the original plan that day was to challenge the certification of Joe Biden ’s election victory in several states, in support of Donald Trump ’s baseless efforts to overturn the results.

But now that hundreds of violent marauders were demanding the same thing, the Republicans in the closet worried that solidarity with the mob might not be a good look.

“One thing that was brought up was that people were hurt,” Mr Tuberville said.

Besides, the senators knew they didn’t have the votes to stop Mr Biden from becoming president.

“Do we want to continue this,” Mr Tuberville remembered wondering, “if there’s not going to be a result we are looking for anyway?”

Others worried about the toll their actions might take on the country.

“I do remember saying we have to pull the country together,” recalled Senator James Lankford, a Republican from Oklahoma. “We are so exceptionally divided that it’s spilling into the building.”

“I didn’t really listen to them,” he told the Post .

In the end, the Alabama Republican cast these concerns aside and voted against certifying the vote in Arizona and Pennsylvania, two states won by Mr Biden.

“I wasn’t voting for me, I was voting for the people of Alabama,” Mr Tuberville said. “President Trump has an 80 per cent approval there. I told them, ‘I’m going to vote how you want me to vote.’”

In Alabama, a huge majority of voters cast their ballots for Mr Trump in 2020. However, that was not the case in Arizona and Pennsylvania, where more people voted for Mr Biden. An “audit” of the vote in Arizona, organized by State Senate Republicans, confirmed Mr Biden’s victory there.

Since January, Mr Tuberville has said he doesn’t think fraud was responsible for Mr Trump’s election loss, and has called the former president’s election conspiracy rhetoric a “mistake.” But that doesn’t mean he’d take his vote back.

“I have no regrets,” the senator said.

Amazing, some of the first comments here are MAGA trying to deflect and using the same old propaganda line. Tuberville is a disgrace. He dances around the FACT that he knew that voting to decertify was wrong. However, he excuses his decision to vote for it because he was doing his constituents will. What happened to the 'courage of your convictions?' We don't only vote for people would will literally represent us. We vote for people who will represent our values. The core value being INTEGRITY!

So Tommy Tubesteak admits he wouldn't take back his vote now that he knows the TRUTH? This is the dangerous mindset of tRUMPLIKKKANS who believe in POWER AT ALL COSTS! They would've GLADLY DESTROYED OUR DEMOCRACY TO TO KEEP SOMETHING THE MAJORITY OF THE AMERICAN PEOPLE TOOK AWAY FROM THEM! AND MAKE NO MISTAKE, THEY WILL GLADLY DO IT AGAIN IF GIVEN HALF A CHANCE! I WISH GEORGE WASHINGTON HIMSELF COULD COME BACK AND SLAUGHTER THEM ALL!

Interesting 🤨… so they hid to plot huh? I’d have thought 💭 to put on something to show the DOMESTIC TERRORIST.. we’re with you so don’t hurt us.. 😡 smdh..🥸🥸🥸

WASHINGTON — A California man already facing serious felony charges for allegedly using an electroshock device against a downed police officer on January 6 is now accused of conspiring with two friends to commit violence, according to a new indictment unsealed Monday by the Justice Department. Daniel Rodriguez, 38, of...
CALIFORNIA, MD・17 HOURS AGO
The Independent

The largest newspaper in Missouri has called for one of the state’s US senators to be promptly investigated by a congressional panel over his alleged role in the Jan 6 riot at the US Capitol.More than 10 months after the Senate ethics committee said it was to probe the actions of Missouri’s Josh Hawley and Texas’s Ted Cruz for their alleged encouragement to supporters of Donald Trump seeking to overturn the 2020  election, there has been little outward sign of progress.Several times, however, both Mr Cruz and Mr Hawley have defended their actions that day, with the Missouri senator...
ADVOCACY・21 HOURS AGO
TIME

This article is part of the The DC Brief, TIME’s politics newsletter. Sign up here to get stories like this sent to your inbox every weekday. It’s not hyperbole to say Joe Biden’s childhood home state of Pennsylvania put him in the White House. It was The Associated Press’ call of that state’s outcome at 11:25 a.m. on Saturday, Nov. 7, of last year that made it official that the son of Scranton would be heading back to Washington and into a job he’s coveted since his 20s. The counting in Pennsylvania took four days and it was closer than anyone in the Biden campaign wanted. But the Keystone State came through for Biden, who had early on recognized the state as a lynchpin for his strategy and even headquartered his campaign near Philadelphia’s City Hall. (Well, at least until COVID-19 mothballed that operation and sent everyone working from kitchen stools and basement couches.)
PENNSYLVANIA STATE・20 HOURS AGO
The Guardian

WASHINGTON, Nov 30 (Reuters) - A new fault line opened between Republicans in the U.S. House of Representatives on Tuesday, as lawmakers squabbled publicly over accusations of religious bigotry and racism among party conservatives. In a fight that could further complicate Republican efforts to forge unity ahead of next year's...
CONGRESS & COURTS・21 HOURS AGO
WashingtonExaminer

After a recent video surfaced of Rep. Lauren Boebert making anti-Muslim comments about Rep. Ilhan Omar, former President Donald Trump on Tuesday called for the Minnesota Democrat to apologize rather than the Colorado Republican.
POTUS・20 HOURS AGO
Washington Times

Judges grilled lawyers for former President Donald Trump about his bid to block the release of White House communications and other records to the lawmakers investigating the deadly Capitol invasion. The House select committee seeks those documents as part of its probe of the riot, when hundreds of Trump's supporters...
POTUS・23 HOURS AGO

Insider asked Republicans poised to take charge what they'd do if American voters decide to put them back in the majority in Congress.
U.S. POLITICS・17 HOURS AGO
Reuters

WASHINGTON, Nov 30 (Reuters) - U.S. appeals court judges on Tuesday signaled skepticism toward former President Donald Trump's bid to keep records about his conversations and actions before and during the deadly Jan. 6 Capitol riot by a mob of his supporters away from congressional investigators. A three-judge panel of...
POTUS・20 HOURS AGO
CNN

(CNN) — On Monday, New York Democratic Rep. Tom Suozzi announced he plans to leave his 3rd District seat behind to run for governor in 2022. Asked about whether control of his seat -- or the House more generally -- mattered much in his decision, Suozzi said it "wasn't a big factor."
CONGRESS & COURTS・1 DAY AGO
Newsweek

The former president has suggested such an event would be a "ratings bonanza for television," as he blasted the media for "trying to demean the real results."
PRESIDENTIAL ELECTION・4 HOURS AGO

President Joe Biden’s "Build Back Better" legislation is on the docket for the Senate. All eyes are on Democratic Sens. Joe Manchin and Kyrsten Sinema. However, after the sweeping wins for Republicans in Virginia and elsewhere this November, other Democrats up for reelection in 2022 should evaluate if voting for the $1.75 trillion bill is in their best interest.
CONGRESS & COURTS・3 HOURS AGO
CNBC

Former Trump White House chief of staff Mark Meadows has agreed to cooperate in at least a limited way with the select House committee investigating the Jan. 6 Capitol riot and related events. Former President Donald Trump has cited executive privilege in seeking to prevent testimony and documents from being...
POTUS・21 HOURS AGO
The Guardian

Hours before the deadly attack on the US Capitol this year, Donald Trump made several calls from the White House to top lieutenants at the Willard hotel in Washington and talked about ways to stop the certification of Joe Biden’s election win from taking place on 6 January. The former...
PRESIDENTIAL ELECTION・1 DAY AGO

Former president pressed lieutenants about ways to delay certification of election result, plus vaccine is word of the year
POTUS・1 DAY AGO
Newsweek

Former President Trump said during the presidential campaign that Biden would lock down the country like a "prison state."
PROTESTS・23 HOURS AGO
Vanity Fair

Ahead of his likely reelection run in 2024, Donald Trump is building an infrastructure for insurrection. The “fraud” cries on social media, the desperate begging of administrators to “find” votes for him, the blustery calls for his supporters to “fight” for him—all that may be so last year. Now, he and his allies are trying to lay the foundation to allow him to undermine democracy without resorting to such overt measures.
PRESIDENTIAL ELECTION・1 DAY AGO
Virginia Mercury

Why Biden’s approval ratings have sunk

By Clodagh Harrington, De Montfort University Ten months into his presidency, Joe Biden’s poll numbers are, by any measure, lukewarm. According to the latest figures, taken on Nov. 24, only 43 percent of Americans approve of his performance in office, while a majority think he is not doing a good job. In a week when […] The post Why Biden’s approval ratings have sunk appeared first on Virginia Mercury.
PRESIDENTIAL ELECTION・1 DAY AGO