Senate Republican leader Mitch McConnell wants the upcoming midterm elections to focus on what President Joe Biden is doing now rather than what Donald Trump has done in the past, he told reporters on Monday.

The Kentucky lawmaker was asked how he feels about Trump's enduring dominance within the Republican party going into the 2022 election cycle during a Senate GOP press conference.

'Are you concerned at all, comfortable, with your party embracing the former president whom you said was morally responsible for the January 6 attack?' CNN's Manu Raju asked.

McConnell skirted over the Capitol attack to say he wants 2022 to be a 'referendum' on the Biden administration rather than a 'rehash of suggestions' from 2020.

'I do think we need to be talking about the future and not the past. I think the American people are focusing on this administration, what it's doing to the country,' McConnell replied.

'And it's my hope that the 2022 election will be a referendum on the performance of the current administration, not a rehash of suggestions about what may have happened in 2020.'

The 'suggestions' McConnell seemed to be referring to were accusations that Trump incited his supporters to storm the US Capitol on January 6, when the Senate was set to certify Biden's electoral college victory.

Those accusations led to condemnation from a number of Republican lawmakers in the immediate aftermath of the riot, including many who have since walked back their initial anger.

McConnell was one of those who criticized Trump, declaring on the Senate floor in February that Trump was 'practically and morally responsible' for the attack.

However he also voted against convicting him following the House's second impeachment of the GOP leader.

When asked earlier this year about Trump's criticism of his leadership, McConnell tool a similarly dismissive tone and brushed it off by saying he was 'focused entirely on the present and the future not the past.'

Trump's increasingly frequent campaign activity has proved he's still widely in-demand for GOP endorsements, however, despite having lost in 2020 in an election that also cost his party control of Congress.

While there he fueled 2024 presidential rumors because of Iowa's historic importance on the White House campaign trail. 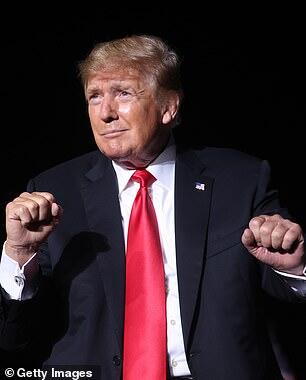 He also spoke at a high-dollar donor retreat in Palm Beach, Florida sponsored by the National Republican Senatorial Committee, a group aimed at getting more Republicans elected to the Senate.

'It was a dying party, I’ll be honest. Now we have a very lively party,' he told the audience.

He went after some of his fellow Republicans as well, venturing to attack GOP senators at an event promoting their party's re-election.

Trump name-checked Utah Senator Mitt Romney and Nebraska Senator Ben Sasse, two of of the seven GOP senators who voted to impeach him after the Capitol riot.

McConnell may also be desperate to downplay a kingmaker who's asking his own fans not to support the party that got him elected.

Last week Trump released a statement telling Republicans not to vote in the upcoming elections unless his baseless election fraud claims were solved - but didn't elaborate on how that would happen.

'If we don’t solve the Presidential Election Fraud of 2020 (which we have thoroughly and conclusively documented), Republicans will not be voting in ‘22 or ‘24. It is the single most important thing for Republicans to do,' Trump had said.

Focusing on Biden appears to be a much easier pathway to support for Republicans.

The president has been grappling with approval numbers lower than that of any Democratic president at the same point in his term since Harry Truman, save for a few points where Bill Clinton was level with or surpassed him.

On top of that he's been dealing with the fallout from an increasingly dire border crisis and his chaotic withdrawal from Afghanistan, which has been criticized by both sides of the aisle.

Biden's current unpopularity forced McAuliffe to distance himself from the Democratic president ahead of next month's election in Virginia.

The race between former Governor McAuliffe and Trump-backed businessman Glenn Youngkin is widely seen as a bellwether for what's to come in 2022.

'We've got to get Democrats out to vote,' McAuliffe said in a 12-second video clip of a teleconference earlier this month. 'We are facing a lot of headwinds from Washington, as you know.'

'The president is unpopular today unfortunately here in Virginia so we have got to plow through.'

the President today is not concerned with the American people. He said so in his speech. He is going to give our jobs to the immigrants. So u tell us. How are we to respect him if he doesn't like us? And its not fake news. I can show you.

It’s about Trump and the Big Lie as well as republicans not wanting to rebuild the infrastructure of this country. About how republicans didn’t want to help Americans get thru the pandemic, also about all the vaccine miss information by republicans and politicizing anti-vexing and kids wearing masks to get back to school. That’s what the election will be about.

all Trump did was talk about every president before him. no chin McConnell needs to go .Trump and those supporting him actually think he is the greatest president every.

In this daily series, Newsweek explores the steps that led to the January 6 Capitol Riot. On December 1, the dam finally broke. Attorney General William Barr invited Associated Press reporter Mike Balsamo to lunch, telling him on the record that he was breaking with President Donald Trump. "Disputing President...
PRESIDENTIAL ELECTION・12 HOURS AGO
Washington Post

As the Jan. 6 select committee investigation gathers momentum, Donald Trump has gotten several cronies to refuse to testify by invoking “executive privilege.” That’s absurd on its face: Much of the information Trump wants to keep buried doesn’t relate to the office of the presidency, but rather to his incitement of mob violence to remain president illegitimately.
POTUS・1 DAY AGO
Newsweek

The former president has suggested such an event would be a "ratings bonanza for television," as he blasted the media for "trying to demean the real results."
PRESIDENTIAL ELECTION・11 HOURS AGO
Business Insider

Jena Griswold told The Washington Post that there was a concerted campaign to place Trump allies in roles overseeing elections.
COLORADO STATE・1 DAY AGO

Democrats want to raise the debt ceiling, avoid a government shutdown, and pass Biden's agenda all before Christmas. The GOP has other plans.
CONGRESS & COURTS・1 DAY AGO
WUSA9

WASHINGTON — A California man already facing serious felony charges for allegedly using an electroshock device against a downed police officer on January 6 is now accused of conspiring with two friends to commit violence, according to a new indictment unsealed Monday by the Justice Department. Daniel Rodriguez, 38, of...
CALIFORNIA, MD・1 DAY AGO
FOX 16 News

Anthony Fauci has taken GOP anger with him to a new level by stating that Republicans who criticize him are “really criticizing science because I represent science.”
U.S. POLITICS・10 HOURS AGO

2022 midterm elections: The most interesting Senate races to watch, from Georgia, to Pennsylvania and Florida

There are 34 Senate seats up in 2022, providing both parties opportunity to make gains in a Senate where Democrats hold a slim majority.
FLORIDA STATE・12 HOURS AGO
Fox News

House Speaker Nancy Pelosi, D-Calif., and Senate Majority Leader Chuck Schumer, D-N.Y., blasted former President Trump for high gas prices under his administration, but the numbers are worse under President Biden. Pelosi and Schumer both took shots at Trump in 2018 over gas prices across the nation as they neared...
PRESIDENTIAL ELECTION・1 DAY AGO
The Guardian

Hours before the deadly attack on the US Capitol this year, Donald Trump made several calls from the White House to top lieutenants at the Willard hotel in Washington and talked about ways to stop the certification of Joe Biden’s election win from taking place on 6 January. The former...
PRESIDENTIAL ELECTION・1 DAY AGO
WashingtonExaminer

After a recent video surfaced of Rep. Lauren Boebert making anti-Muslim comments about Rep. Ilhan Omar, former President Donald Trump on Tuesday called for the Minnesota Democrat to apologize rather than the Colorado Republican.
POTUS・1 DAY AGO

A Republican push on vaccine mandates and a debate over how long a spending patch should last has delayed a House vote to keep the government funded.
WASHINGTON, DC・30 MINUTES AGO
MarketWatch

New book by Trump's fourth and final chief of staff says the then-president tested positive for the coronavirus days before he was hospitalized at Walter Reed.
CLEVELAND, OH・4 HOURS AGO
Fox News

Democrats want Biden to change his style, but that’s not happening

Assuming that no one accepts Donald Trump’s offer for a "ratings bonanza" debate on what he calls the Big Lie — and what opponents call his Big Lie — we are stuck with a whole lot of pontification about Joe Biden. Virtually every day, I see a headline along the...
PRESIDENTIAL ELECTION・1 DAY AGO
WashingtonExaminer

Republicans seeking their party’s nomination for Senate in Ohio are training their sites on J.D. Vance as the conservative populist makes inroads with GOP primary voters.
U.S. POLITICS・5 HOURS AGO

Democrats took a drubbing in elections last month, in part, for simply failing to govern. Endless bickering within their congressional caucus squandered chances to pass major reforms in infrastructure, climate and social policies. So why are Republicans rushing to make the same mistake? ...
U.S. POLITICS・17 HOURS AGO
Washington Times

This article is part of the The DC Brief, TIME’s politics newsletter. Sign up here to get stories like this sent to your inbox every weekday. It’s not hyperbole to say Joe Biden’s childhood home state of Pennsylvania put him in the White House. It was The Associated Press’ call of that state’s outcome at 11:25 a.m. on Saturday, Nov. 7, of last year that made it official that the son of Scranton would be heading back to Washington and into a job he’s coveted since his 20s. The counting in Pennsylvania took four days and it was closer than anyone in the Biden campaign wanted. But the Keystone State came through for Biden, who had early on recognized the state as a lynchpin for his strategy and even headquartered his campaign near Philadelphia’s City Hall. (Well, at least until COVID-19 mothballed that operation and sent everyone working from kitchen stools and basement couches.)
PENNSYLVANIA STATE・1 DAY AGO
MarketWatch

Risk of a government shutdown beginning this weekend is rising as conservative Republicans are reportedly plotting to force a partial closure in an effort to defund the Biden administration’s vaccine mandate on the private sector.
WASHINGTON, DC・2 HOURS AGO