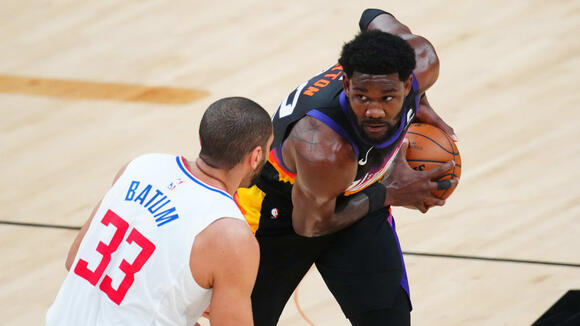 Deandre Ayton and the Suns weren't close to agreeing to a contract extension before Monday's deadline.

Monday marked the extension deadline for 2018 draftees, with a number of players receiving new contracts with their respective teams. Memphis forward Jaren Jackson Jr. signed a $105 million extension on Monday, and Ayton's teammate Mikal Bridges signed his own $90 million deal on Sunday. But after Monday's deadline, Ayton will now reach restricted free agency next summer.

Jones indicated Tuesday he was willing to discuss a max contract extension with Ayton's representatives if a potential deal came under five years. But per Jones, such a proposal was a non-starter for Ayton and Co.

"We’re disappointed that we couldn’t reach an extension agreement this offseason," Jones told The Athletic 's Sam Amick . "We didn’t have real negotiations."

Ayton averaged 14.4 points and 10.5 rebounds per game last season. He was an integral part of Phoenix's run to the Finals as he shot 65.8% from the field.

• Be Patient With the Lakers
• NBA Entertaining Rankings: Most Exciting Teams to Watch
• What Rival Scouts Are Saying About Every NBA Team

Phoenix Suns head coach Monty Williams confirmed that starting center Deandre Ayton would return from his five-game absence tonight. Ayton has been out since November 4 with a leg injury but will be back in action against the Minnesota Timberwolves. https://twitter.com/GeraldBourguet/status/1460389434742902786. Through six games, the former first overall selection is...
NBA・15 DAYS AGO
Sporting News

Why did the Suns draft Deandre Ayton instead of Luka Doncic?

Leading up to the 2018 NBA Draft, Luka Doncic dominated the discussion. A standout in Europe for years as a kid playing against men, Doncic seemed to be a surefire future NBA star. Debuting for Real Madrid as a 15-year-old, it took all of two seasons as a professional before...
NBA・13 DAYS AGO
brightsideofthesun.com

Solar Panel: What is Deandre Ayton’s ceiling? Is he a max player?

Find us — Twitter @DaveKingNBA @ZonaHoops_ @SunsSolarPanel. Like us on Facebook at www.Facebook.com/SunsSolarPanel. Quick link via Chartable. Subscribe to the Solar Panel Podcast (new ORANGE logo) on your favorite podcast app: Apple, Google, Spotify, Stitcher, and all the others. Please remember to subscribe, rate and review the show on the...
NBA・10 DAYS AGO

The NBA Draft is an event that is designed to stir up immediate reactions. Why wait to see how a prospect will develop when you can declare that he was the wrong selection only 30 seconds into his professional career? This is the nature of the beast. Ahead of Friday's...
NBA・11 DAYS AGO
brightsideofthesun.com

Ayton second fastest in Suns history to 3,000 points and 2,000 rebounds

Young center Deandre Ayton, the No. 1 overall pick in the 2018 Draft, tonight became the second fastest Phoenix Suns player ever to record 3,000 career points and 2,000 career rebounds in the NBA. Ayton reached that milestone in just 188 career games. In 54 years of franchise history, including...
NBA・8 DAYS AGO
Arizona Sports

Suns’ McGee, Kaminsky made most of opportunity in Ayton’s absence

The Phoenix Suns kept winning during the five-game stretch center Deandre Ayton missed with a knee contusion between Nov. 6-14. They went 5-0 with three double-digit victories, partly due to the play of Ayton’s backups, JaVale McGee and Frank Kaminsky. “Excited that those guys had a chance to prove why...
NBA・13 DAYS AGO
Arizona Sports

Baker’s dozen: Deandre Ayton, bench propel Suns to win No. 13 in a row

The Phoenix Suns’ 115-111 win over the San Antonio Spurs on Monday made a solid case for why the team’s now 13-game winning streak is so impressive. Through mostly continuity and a defense fully hitting its stride, the Suns have been cranking out victory after victory, despite a handful of the team’s elements not being fully realized yet that made them so special last year.
NBA・7 DAYS AGO

The McGee influence on Ayton is paying off for the Suns

The Phoenix Suns are cooking right now. After a 115-111 win in San Antonio on Monday night, the team has won 13 consecutive games. It is one of the best stretches the franchise has seen in a decade-and-a-half and, despite defeating teams that are either at the bottom of the standings or without their stars, it is something that should be valued and appreciated. It’s not as if the opposition isn’t trying to beat the Suns. They are fielding rosters with talent that is dangerous for they have something to prove.
NBA・7 DAYS AGO
Sports Illustrated

The Phoenix Suns (17-3) host the Golden State Warriors (18-2) in a matchup between the top two teams in the Western Conference at Footprint Center on Tuesday, November 30, 2021 at 10:00 PM ET. Hoping to catch this game live? Below, we'll give you all the info you need to watch this matchup, including on FuboTV.
NBA・1 DAY AGO
Newsday

Bruce Brown back for Nets, but Steve Nash goes with DeAndre' Bembry against Suns

Bruce Brown returned Saturday and was available to face the Suns, but Steve Nash continued to play the hot hand with DeAndre’ Bembry in a big-time matchup against Devin Booker. Brown missed two games with a hamstring injury, and before the game, Nash spoke highly of both his and Bembry’s...
NBA・3 DAYS AGO
Sportsnaut

Two streaking teams collide in a historic early-season matchup when the Phoenix Suns host the Golden State Warriors in a nationally televised contest Tuesday night. The timely scheduling of the teams with the two best records in the NBA -- the Warriors (18-2) lead the Suns (17-3) atop both the Pacific and Western standings -- brings together opponents from the same division with winning percentages of .850 or higher at least 20 games into the season for the first time in NBA history.
NBA・15 HOURS AGO
Sports Illustrated

NEW YORK (AP) The Phoenix Suns are taking a 15-game winning streak to Brooklyn for a showdown with the Nets. It feels like a big game - just not to the surging Suns. ''We do it one at a time. We know we have a tough opponent tomorrow that's been waiting on us, well-rested,'' All-Star guard Devin Booker said. ''So, we just have to come in with the same mentality, play the type of basketball that we do, defend at high level, put ourselves in good shape to get it done.''
NBA・2 DAYS AGO
Sports Illustrated

The Suns Have Won 16 in a Row. It's Been Spectacular.

NBA Power Rankings: Warriors, Suns on a roll heading into this week’s matchups

NBA power rankings: Now that the NBA season is in full swing, it’s time to rank all 30 teams. With
NBA・1 DAY AGO
Fox News

LeBron James gets 2 young Pacers fans tossed from game, one makes crying face on way out

LeBron James, the Los Angeles Lakers star, had two fans ejected during his team’s overtime victory on Wednesday night in a game against the Indiana Pacers. Reports indicated that it was not obvious what the fans did to aggravate James, who alerted one of the referees about the incident. After the game, James said, "I would never say it to a fan and a fan should never say it to a player," according to TMZ.
NBA・5 DAYS AGO
firstsportz.com

Blake Griffin and Isaiah Stewart fight was one of the most looked upon moments from the Nets vs Pistons most recent clash. With game being as tight and as compact as it was, Nets’ big man Blake Griffin and Pistons’ Center Isaiah Stewart were almost on the verge of throwing hands at one another, but it seemed like after the initial contact the former player decided to pull out of the action, giving more importance of his presence on the court.
NBA・24 DAYS AGO
Sports Illustrated

The Golden State Warriors crushed the Brooklyn Nets 117-99 on Tuesday night to improve to a 12-2 record, which is the best in the NBA. Meanwhile, the Nets fell to 10-5, (but they did rebound on Wednesday night beating the Cleveland Cavaliers 109-99 to improve to 11-5). Kevin Durant was...
NBA・11 DAYS AGO