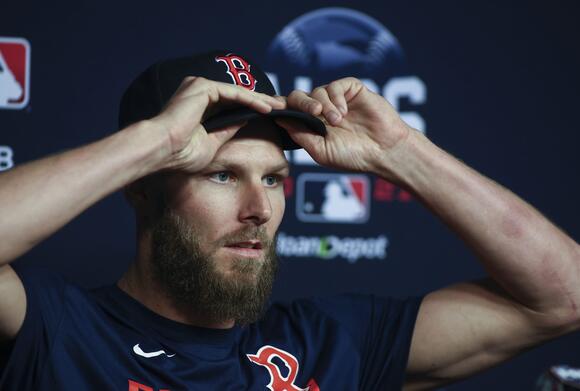 Is Chris Sale going to start for the Red Sox in Game 5 of the American League Championship Series? We still don't know yet.

Prior to Game 4, Red Sox manager Alex Cora explained his team's plans when it comes to the veteran starter.

"Most likely but we’ll see how it goes today," said Cora when asked Tuesday afternoon if Sale would get the start at Fenway Park Wednesday afternoon. "We’d hate to use him out of the bullpen but he’s available. And we’ll try to stay away from him if possible. Kind of the same situation with Nick. We’ll see. It’s the same situation as (Nick) Pivetta yesterday."

At one point, Cora insinuated that the Red Sox were going to stay away from using Sale out of the bullpen. But, after some consultation with participants in the equation, the manager has changed course.

"Yeah, but at the same time, talking to the medical staff and talking to Chris, they feel like he can give us one inning out of the bullpen," Cora said. "So we’ll never - if they feel that way, we’ll keep our options open, right? And see what we can do today. And if we can be aggressive and there’s a pocket there for him that we’re comfortable with, we may use him."

Sale only got eight outs in his Game 1 outing, giving up a run while allowing six hits to the Astros.

Thanks to MacFarlane Energy where they provide championship quality home heating oil and HVAC services.

The Red Sox are finalizing a one-year contract with Michael Wacha, reports Jeff Passan of ESPN (Twitter link). The deal is pending a physical. Wacha is represented by CAA Sports. Wacha spent the 2021 campaign with the division-rival Rays. Working primarily as a starter, he tossed 124 2/3 innings over...
MLB・12 DAYS AGO
NBC Sports

The Boston Red Sox are looking to shore up their bullpen heading into the 2022 MLB season. According to WEEI's Rob Bradford, the Red Sox have shown interest in free-agent relief pitcher Jeurys Familia. The right-hander has spent nine-and-a-half of his 10 years in the league as a high-leverage reliever for the New York Mets.
NFL・14 DAYS AGO
Yardbarker

Devers was originally one of six Red Sox players selected as a finalist for the third annual All-MLB team earlier this month, joining teammates Xander Bogaerts, Kyle Schwarber, Enrique Hernandez, J.D. Martinez, and Garrett Whitlock. While the other five were unable to land on one of the two All-MLB squads,...
MLB・14 DAYS AGO
FanSided

Only one Red Sox player made a 2021 All-MLB Team

Boston Red Sox third baseman Rafael Devers made an All-MLB team. The third annual All-MLB Teams were announced Tuesday on MLB Network and one Boston Red Sox star made the cut. The All-MLB Team is split into a First and Second Team with each including a player at every infield position, three outfielders, a designated hitter, five starting pitchers plus two relievers.
MLB・14 DAYS AGO

The Boston Red Sox are reportedly on the cusp of signing a pitcher away from American League East rival Tampa Bay, closing in on a deal with pitcher Michael Wacha
MLB・12 DAYS AGO
WEEI Sports Radio

Thanks to the news that the Tampa Bay Rays were locking up Wander Franco to a record-setting contract extension, we are reminded of how such a strategy could help the Red Sox.
MLB・14 DAYS AGO
FanSided

The Boston Red Sox desperately needed to address their rotation. With Eduardo Rodriguez leaving for Detroit, Boston had a gaping hole in the middle of the rotation that they needed to fill. Although there are several young arms who could be ready for a starting role, the Red Sox may not be ready to entrust two spots to those youngsters.
MLB・11 DAYS AGO
Yardbarker

What’s Next For Red Sox After Missing Out On Steven Matz?

The Boston Red Sox entered the offseason hoping to retain left-handed pitcher Eduardo Rodriguez. When that didn’t happen, the club had no choice but to start looking elsewhere for a rotation arm, and Steven Matz was one guy on Boston’s radar. The Red Sox were frequently mentioned as possible suitors...
MLB・14 DAYS AGO

Could the Red Sox swipe John Means from the Orioles?. Going into this offseason we knew that the Red Sox would be shopping for some starting pitching and now that Eduardo Rodriguez is in Detroit, that need is even greater. As it stands right now, Boston has a righty heavy rotation but a very interesting report came out earlier today that could allow Chaim Bloom to bring a bit more balance to his pitching staff.
MLB・14 DAYS AGO
NESN

Steven Matz reportedly will not be heading to Boston after all. ESPN’s Jeff Passan early Wednesday morning reported Matz is taking his talents to St. Louis on a four-year deal with an average annual value of $11 million. According to Passan, the left-hander can earn up to $48 million on his new contract with the Cardinals.
MLB・14 DAYS AGO
FanSided

Boston Red Sox Rumors: Jeurys Familia could be the solution in the pen

The Boston Red Sox offseason plans are starting to heat up. With the MLB hot stove in full swing, particularly for the pitching market, the Sox have been involved in all sorts of rumors. While they haven’t ended up pulling the trigger on anyone yet, that doesn’t mean they aren’t going to in the future.
MLB・14 DAYS AGO
FanSided

The Boston Red Sox can find some bargains in free agency. The Boston Red Sox will be tied to many of the top free agents in the rumor mill but they won’t be able to afford all of them. They may splurge on a big name this winter but filling out the roster will require finding talent at a more affordable cost. Since it’s Black Friday, we’ll follow the annual tradition of shopping for bargains by exploring some free agents who could be undervalued on the market.
BOSTON, MA・12 DAYS AGO

Red Sox third baseman Rafael Devers captured another honor for his strong 2021 campaign Tuesday, as the 25-year-old was named to the All-MLB Second Team. In action for 156 games this past season, Devers mashed a career-high 38 home runs, and his 113 RBIs were the second-highest single-season total of his five-year MLB career. Devers also hit .279 and his .890 OPS was his best since a .916 in 2019.
MLB・14 DAYS AGO
FanSided

According to Tim Dierkes of MLB Trade Rumors, the free agent market for starting pitcher Marcus Stroman is starting to heat up. Dierkes says that a handful of teams, including the Chicago Cubs, New York Mets, San Francisco Giants, Boston Red Sox, and Los Angeles Angels are interested in adding Marcus Stroman to their starting rotation in 2022.
MLB・13 DAYS AGO
Sun-Journal

Bogaerts, Devers could be next stars to leave Red Sox

Eduardo Rodriguez’s comments on Monday aligned with the words Mookie Betts once spoke and many Red Sox players before them never said, but surely wanted to. It boils down to this: the Red Sox didn’t want to pay them a fair market wage, so they took their services elsewhere. It’s...
MLB・12 DAYS AGO
nbcboston.com

Michael Wacha on Joining Red Sox: ‘It Was Almost a No-Brainer'

Tomase: Can Wacha find success with Sox after 'no-brainer' signing? originally appeared on NBC Sports Boston. The Red Sox offseason Value Tour has made its first stop -- Michael Wacha. The free agent right-hander agreed to a one-year, $7 million contract on Saturday, bringing an experienced arm to the back...
MLB・11 DAYS AGO
SportsGrid

Paxton underwent his second Tommy John surgery in 2021, and he has a long road to recovery ahead of him. When he is ready to pitch in 2022, he’ll be doing it in a Red Sox uniform. Paxton reportedly agreed to a one-year, $10M bet with the Red Sox with club options in 2023 and 2024. That could bring the contract as high as $35M.
MLB・7 DAYS AGO
NBC Sports

For several years during Dave Dombrowski's tenure as Boston Red Sox general manager, the club's farm system was barren. Most of the top prospects were shipped out of town for veteran talent as Dombrowski's front office had only one goal in mind: a championship. They succeeded in that endeavor. The...
MLB・9 DAYS AGO
ABC6.com

BOSTON, MA—The Boston Red Sox today announced the following roster moves:. · The club agreed to a one-year contract with right-handed pitcher Ryan Brasier for the 2022 season. · The club will not tender a 2022 contract to outfielder Tim Locastro. As a result, he becomes a free agent. ·...
MLB・7 DAYS AGO
Fox11online.com