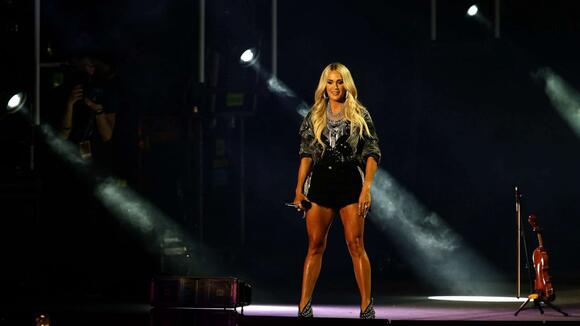 Carrie Underwood says her duet with Jason Aldean, "If I Didn't Love You," was years in the making.

While the duet, which was released earlier this year, may have come as a surprise to some, the country singer said she and Aldean have been plotting for years to set up a collaboration.

The pair have teamed up for live performances over the years, including a cover of Guns N' Roses' "Paradise City" at the 2010 CMA Fest, but this marks their first official studio duet.

"Jason asked if I would sing 'If I Didn't Love You' with him," she recently shared. "I knew I liked the song, and Jason and I have actually been trying to do things together over the years. We've sang together before, but we've never officially recorded anything together."

"It just kind of felt like this could be our moment," she added.

Underwood continued, "I felt like it was a little bit of an unexpected duet to other people, but I feel like I always knew at some point I'd probably sing with him officially, and this just seemed like the stars were aligning and it just seemed like it was going to be the perfect fit."

"If I Didn't Love You" is nearing the top spot on country radio -- sitting at No. 2 on the Billboard charts the last two weeks.

The hit duet is featured on Aldean's upcoming album, "Macon," set for release on Nov. 12.

Carrie Underwood's exciting update on her much-loved activewear brand, CALIA, was tainted with something unexpected on Friday, when she revealed her new winter range, would be her last. The star looked glowing in new snapshots promoting the line and all the new holiday collection pieces. But fans were saddened to...
BEAUTY & FASHION・9 DAYS AGO
Life and Style Weekly

The Best and Worst Dressed Celebs at the 2021 CMAs: Red Carpet Photos of the Country Music Awards

The best and worst dressed celebrities at the 2021 Country Music Awards definitely made a statement. Stars like Miranda Lambert, Mickey Guyton and more walked the CMAs red carpet in stunning fashions, while others had a bit of a wardrobe miss. The 55th annual awards show, which took place on...
NASHVILLE, TN・26 DAYS AGO
HollywoodLife

Carrie Underwood brought the holiday cheer with her performance of ‘Favorite Time of Year.’ The country singer looked absolutely stunning in a red dress for the performance. Carrie Underwood is ready to celebrate the holidays! The “Cowboy Casanova” singer blessed fans with a special performance during the Macy’s Thanksgiving Day...
CELEBRITIES・11 DAYS AGO
Wide Open Country

There's reason to be cheerful about the nominees in multiple categories for the 55th annual CMA Awards. The September announcement proved that the Country Music Association remains behind outside-the-box Nashville stars Chris Stapleton and Brothers Osborne and recognizes the sustained excellence of Gabby Barrett, Carly Pearce, Jimmie Allen, Mickey Guyton and others beyond the genre's awards show regulars.
NASHVILLE, TN・28 DAYS AGO

Carrie Underwood Takes Her Family to Disney World: We 'Made a Million Memories'

Carrie Underwood and her family experienced the magic!. On Wednesday, the country music singer said she took a "much needed" trip to Disney World with husband Mike Fisher and their children. In a sweet, Disney-filled Instagram post, Underwood, 38, posed alongside Fisher, 41, in front of the castle in the...
CELEBRITIES・11 DAYS AGO
WWD

Click here to read the full article. Carrie Underwood is moving on from Calia. The country music superstar revealed on her Instagram page over the Thanksgiving weekend that the fall drop of her activewear collection with Dick’s Sporting Goods will be the final one.More from WWDAthleisure Beauty BrandsInside Vimmia's Brentwood StoreMavi Wants to Expand its Presence in the Women's Market Calling the latest offering “probably my favorite collection we’ve done,” Underwood added: “This new product hitting stores now will be my last collection, which I will continue to share more of over the coming months. I am so proud of everything we’ve created...
CELEBRITIES・7 DAYS AGO
country1037fm.com

Carrie Underwood At Disney World, Getting Ready For Thanksgiving

Carrie Underwood has been enjoying spending some time with her family as we approach the holiday season, and she shared some pictures from a recent trip to Disney World with her husband Mike and her young boys. Carrie posted to her Instagram along with a few pictures of her, her...
CELEBRITIES・12 DAYS AGO
E! News

Watch: Carrie Underwood Talks Family Christmas Traditions. Sometimes, it's the simplest traditions that leave Carrie Underwood blown away. As excitement continues to grow for the holiday season, the American Idol winner is giving fans a tease into what her family celebrations will look like when Santa Claus comes to town.
FAMILY RELATIONSHIPS・12 DAYS AGO

Carrie Underwood just can't wait for the beginning of December, as she will be heading to Las Vegas for her much-anticipated residency, Reflection. Ahead of the first show, the singer has been sharing teaser videos on social media, and her latest one has received a rave response. Taking to Instagram,...
CELEBRITIES・6 DAYS AGO
soundslikenashville.com

As one of country music’s top stars, Carrie Underwood juggles a busy schedule, and with her REFLECTION: The Las Vegas Residency gearing up in December, she’s as busy as ever. However, the Platinum-selling superstar says she and her family still make time to celebrate Thanksgiving when they can, even if they have to work around schedules to make it happen.
CELEBRITIES・11 DAYS AGO
wincountry.com

Country stars’ reactions to their Grammy nominations Tuesday were short, but sweet. Among those who turned to social media to share their excitement was Jimmie Allen, who scored a nomination in the all-genre Best New Artist category. The hitmaker didn’t use words to express his gratitude, but rather a series of emojis, posting the crying face, prayer hands and mind blown emojis on his Instagram stories alongside the announcement.
CELEBRITIES・13 DAYS AGO
KBOE Radio

TAYLOR SWIFT DEBUTS AT NUMBER ONE; JASON ALDEAN IN TOP 10

Well, this doesn’t come as much of a surprise. Taylor Swift’s “Red (Taylor’s Version)” tops the “Billboard” 200 Album chart this week. Tay moved 605,000 equivalent album units to earn the number one spot, giving her the second-largest week for an album this year behind Drake’s “Certified Lover Boy,” which moved 613,000. Of Tay’s units, 369,000 were in traditional album sales, making it the best-selling album of the week, and the best-selling album this year.
CELEBRITIES・14 DAYS AGO

Jason Aldean on Life in His ’40s: ‘Helluva Lot Different’

Earning a recent Grammy nomination for his “If I Didn’t Love You” track with Carrie Underwood on top of currently playing shows around the US on tour, country star Jason Aldean is certainly no stranger to being busy. The singer opened up recently about what getting older looks like for him.
CELEBRITIES・11 DAYS AGO
Outsider.com

WATCH: Carrie Underwood Lip Syncs to Her Own Song as She Debuts New Filter

Right after Thanksgiving wrapped, country star Carrie Underwood ushered in her “favorite time of year” with a new Instagram filter. She debuted the new filter on her Twitter page, with a video of her lipsynching to her iconic Christmas tune, “Favorite Time of Year.” The filter plays the popular holiday hit while snowflakes fall and your face is lit up by a soft glow. You can use the filter anytime you post to your Instagram Stories or send it to friends.
CELEBRITIES・9 DAYS AGO
104.3 WOW Country

Jason Aldean likes for his Thanksgiving celebrations to be as traditional as you might expect of a Macon, Ga., native. Aldean spoke to the Boot in 2009 and detailed how he spends his all-American holiday. "We usually go out and fry a couple of turkeys at my house," he said at the time. "Then we watch some football games."
CELEBRITIES・11 DAYS AGO
Taste of Country

Carrie Underwood After Her Las Vegas Residency Debut: ‘I Feel Like I Blacked Out’

Carrie Underwood doesn't reveal all of the secrets of her new Las Vegas show, but a behind-the-scenes video of her Reflection: The Las Vegas Residency previews many of the show's highlights. In the video below, Underwood appears in plain clothes backstage and on the set of her show at the...
LAS VEGAS, NV・3 DAYS AGO
wfav951.com

Carrie Underwood Is Ready To ‘Reflect’ During Vegas Residency

Carrie Underwood kicks off her first Las Vegas residency, called Reflection, at The Theatre at Resorts World Las Vegas tomorrow (Wednesday, December 1st). She tells us the show's title takes on multiple meanings: “We want to do our hits. We want to reflect upon all the things that we’ve been so blessed to be able to have accomplished over the past few years and that I’ve been lucky enough to do this, and then obviously when you think about a staging standpoint, you can do a lot with that visually, so it just seemed like a great concept. We’re just looking forward to playing, getting to be there. We’re looking forward to the crowds.”
ENTERTAINMENT・7 DAYS AGO
wivr1017.com

Some of country's biggest stars have teamed up for Nashville's Gaylord Opryland Resort's 38th annual A Country Christmas event.
CELEBRITIES・12 HOURS AGO
country1037fm.com

Carrie Underwood has been tweeting often about her Las Vegas Residency debut, which took place earlier this week (12/1). Last night (12/2) she posted a couple of Tweets talking about her new show and how much fun she had on stage. “Welcome to #REFLECTION at @ResortsWorldLV everyone!!! Last night, we...
CELEBRITIES・3 DAYS AGO