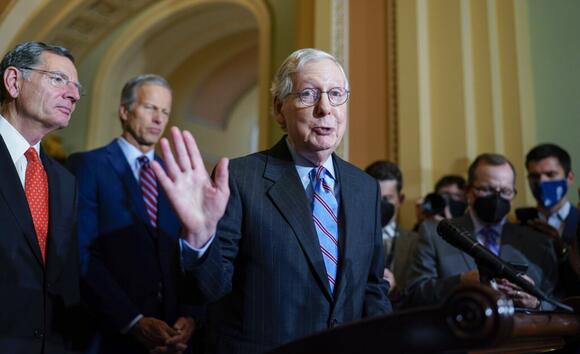 S enate Minority Leader Mitch McConnell said he is hoping Republicans will steer clear of relitigating the bitter 2020 election and will instead focus on the flawed Biden administration in a bid to win in the 2022 midterm elections.

“I do think we need to be talking about the future and not the past,” McConnell, a Kentucky Republican, told reporters.

“I think the American people are focusing on this administration and what it is doing to the country. And it's my hope that the 2022 election will be a referendum on the performance of the current administration. Not a rehash of suggestions about what may have happened in 2020.”

McConnell was responding to a question about former President Donald Trump, whom the National Republican Senatorial Committee invited to speak at their recent retreat in Palm Beach.

McConnell didn’t mention Trump by name but has signaled multiple times he is eager to get past the 2020 election and bitter months that followed, culminating in the Jan. 6 attack on the U.S. Capitol.

Critics say Trump inspired the rioters after repeatedly claiming the election was rigged in favor of President Joe Biden. Trump continues to make the claim and has urged further investigation into election results in some states.

Trump is pushing the GOP to support his election fraud theories.

“If we don’t solve the Presidential Election Fraud of 2020 (which we have thoroughly and conclusively documented), Republicans will not be voting in 2022 or 2024,” Trump said in a statement issued by his political action committee, Save America.

Moscow Mitch TRYING to control the national narrative! ALL Republicans who defend Trump over January 6th betray their OATHS of office! They ALL pretend to be honorable Christian folk yet use Trump's LIES about voter fraud to further their political agenda of making voting harder on the citizens!

Trump will never move on. He is the GOP platform. The money machine will dry up if they quit pushing the big lie.

Wyoming Republican Rep. Liz Cheney, vice chairwoman of the House select committee tasked with investigating the Jan. 6 attack on the U.S. Capitol, issued a warning to former President Donald Trump amid his posturing that he wanted to debate members of the committee: Lie, and there will be criminal penalties.
CONGRESS & COURTS・2 DAYS AGO
WashingtonExaminer

John Eastman is the second witness who has invoked or plans to invoke the Fifth Amendment in response to a January 6 committee subpoena.
PRESIDENTIAL ELECTION・13 HOURS AGO

What Donald Trump has said about running in 2024

None of the US’s recent one-term presidents have run for another term after being defeated. Gerald Ford considered a run against his vanquisher Jimmy Carter in 1980 but ultimately stayed away, and neither Mr Carter nor George HW Bush were ever expected to make a serious play for another term. Donald Trump, though, sees things differently.The Florida resident is clearly considering a run for president in 2024, and there have frequently been reports that an announcement may be imminent. These have so far come to nothing, but Mr Trump’s hold on the Republican Party means that until he decides...
PRESIDENTIAL ELECTION・1 DAY AGO
Vanity Fair

In 2020, the Republican party didn’t even pretend to have a platform beyond their allegiance to Donald Trump, eschewing any policy proposals in favor of a resolution to “continue to enthusiastically support the President’s America-first agenda.” They lost the White House and the Senate in that election, but they appear to be staying the course heading into the midterms: According to Axios, Mitch McConnell has been telling donors and fellow lawmakers that Republicans will not be releasing a legislative agenda ahead of next year’s vote — a reflection of the utter nothingness at the heart of the GOP.
U.S. POLITICS・10 HOURS AGO
The Atlanta Journal-Constitution

Abrams and Trump both questioned elections, but evidence is different

Former President Donald Trump is expected to cast a long shadow over the midterm elections, but his increasing involvement in the Senate and gubernatorial races in Georgia, a state he narrowly lost in 2020, is raising questions about how helpful he will be to Republicans.
GEORGIA STATE・19 HOURS AGO

Jena Griswold told The Washington Post that there was a concerted campaign to place Trump allies in roles overseeing elections.
COLORADO STATE・3 DAYS AGO
The Independent

Congresswoman Marjorie Taylor Greene continued her efforts to whitewash the truth about the 6 January attack on the US Capitol in an interview that was published on Wednesday.Ms Greene made the comments while speaking with Darren Beatie, a former speechwriter for the Trump White House who was ousted after it was revealed that he had attended a conference frequented by white nationalists, on Mr Beatie’s show hosted on Rumble TV, a site seeking to be a conservative alternative to YouTube.She echoed an often-repeated falsehood popular among conservatives during the interview: the assertion that Speaker Nancy Pelosi and other Democrats...
PRESIDENTIAL ELECTION・2 DAYS AGO
WashingtonExaminer

Former Vice President Mike Pence shrugged off the anger of Trump supporters who are upset he did not attempt to challenge the results of the 2020 election while presiding over Congress in January as lawmakers tallied the electoral votes in President Joe Biden's victory despite pressure by his boss at the time.
PRESIDENTIAL ELECTION・2 DAYS AGO
WashingtonExaminer

Former New Jersey Gov. Chris Christie helped build Donald Trump up in the 2016 presidential primary and now he’s trying to tear him down before the 2024 election. He says it’s time for the Republican Party to move on from the boisterous former president and his stolen election claims. The...
PRESIDENTIAL ELECTION・15 HOURS AGO
Newsweek

The former president has suggested such an event would be a "ratings bonanza for television," as he blasted the media for "trying to demean the real results."
PRESIDENTIAL ELECTION・2 DAYS AGO
WashingtonExaminer

In a Thursday speech about his winter COVID-19 policies, President Joe Biden expressed his hope for an end to the political divide that various coronavirus mandates have brought. But as Doug McKelway reports, forces more powerful than politics (specifically a natural yearning to be free) suggest the political divide may not end, neither in the United States nor in many other countries wracked by COVID-19 policy divides and protests.
U.S. POLITICS・12 HOURS AGO
Washington Post

The House select committee investigating the Jan. 6 attack on the U.S. Capitol voted unanimously Wednesday to hold former Trump Justice Department official Jeffrey Clark in criminal contempt for failing to cooperate with its inquiry. It is unclear when the full House could take up the contempt resolution, but if...
PRESIDENTIAL ELECTION・2 DAYS AGO

The House committee investigating the Jan. 6 attack on the U.S. Capitol interviewed Georgia Secretary of State Brad Raffensperger for several hours Tuesday in a meeting that included discussion of former President Donald Trump's efforts to overturn the 2020 election results. “I spoke to the January 6th committee to ensure...
GEORGIA STATE・3 DAYS AGO
MSNBC

Spend enough time online and you'll inevitably see people challenging well-known rivals to grand debates. Most of the time, these folks believe something foolish, which does nothing to discourage them from daring high-profile foes to match wits in some public forum. When their challenges go ignored, and their would-be adversaries...
PRESIDENTIAL ELECTION・3 DAYS AGO
Washington Post

As the Jan. 6 select committee investigation gathers momentum, Donald Trump has gotten several cronies to refuse to testify by invoking “executive privilege.” That’s absurd on its face: Much of the information Trump wants to keep buried doesn’t relate to the office of the presidency, but rather to his incitement of mob violence to remain president illegitimately.
POTUS・3 DAYS AGO
Business Insider

A rift has opened between McConnell and some Republican senators who have pushed vaccine misinformation and opposed mandates.
PRESIDENTIAL ELECTION・1 DAY AGO