For Chicago Sky Superstar Candace Parker, Downtown Victory Rally Was A Dream Decades In The Making 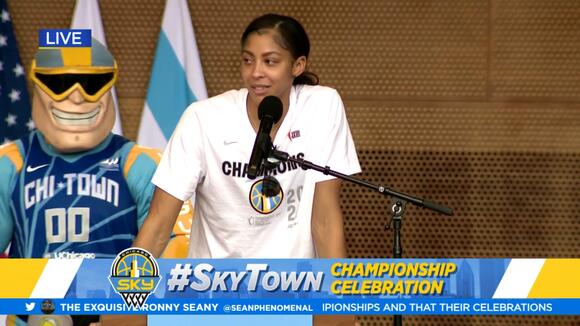 CHICAGO (CBS) — After 13 years with the Los Angeles Sparks, Candace Parker came home to Chicago to play for the Sky, and it immediately paid off, as the Naperville native helped lead her new team to its first WNBA title.

As she joined her teammates at the team’s championship rally in Millennium Park, she said it was a moment she has been dreaming of since she was a child watching the Michael Jordan-era Chicago Bulls win six NBA titles in the 1990s.

“I remember watching the Chicago Bulls parades and the Chicago Bulls rally on television, and just like dreaming of being in that moment; like, dreaming of being and bringing a title to your hometown,” she said. “To do it with this special group in front of a city that showed up, we turned up at Wintrust. Like, everybody that showed up, thank you.”

Sky coach James Wade said, after falling short in the WNBA Playoffs in 2019 and 2020, the team made it a priority to bring in Parker as a free agent this season.

“It was like, ‘Look here, what’s going to put us over the top?’ And so we called CP3, the real CP3, and we said, ‘Hey, what is it going to take for you to come home? Do I have to order you some Portillo’s every day?’ I was like, ‘Look, I’ll be your chauffeur, I’ll do anything you need me to do,’” Wade said. “What happened after that, it was amazing, because she came because of the players on our team.”

As the team celebrated its WNBA title at Millennium Park, Parker also made a point to thank the team’s director of basketball operations and strength and conditioning coach, Ann Crosby, the longest-tenured employee of the Chicago Sky.

“Ann Crosby is synonymous with Chicago Sky,” Parker said. “When you say Chicago Sky, you cannot not say Ann Crosby, and I want to say thank you for the many millions of jobs that you do.”

There are few greater competitors in the game than Los Angeles Lakers legend Kobe Bryant. It’s no secret that Kobe’s ruthlessness spills far beyond the basketball court and apparently, WNBA icon Diana Taurasi once fell victim to this. In a recent interview with Bleacher Report’s Taylor Rooks, Chicago Sky star...
NBA・4 DAYS AGO
New York Post

Candace Parker still has Geno Auriemma beef: ‘We don’t like each other’

Candace Parker and Geno Auriemma, rivals since 2004, still do not like each other. That’s according to Parker, who spilled the tea about her relationship — or lack thereof — with the legendary UConn and USA women’s basketball coach to Bleacher Report’s Taylor Rooks. Parker said she doesn’t have a...
BASKETBALL・4 DAYS AGO
FanSided

The worst conclusions you could draw from Geno Auriemma’s behavior in the past have been confirmed. Tennessee Lady Vols legend Candace Parker was able to reveal the type of person he is based on a conversation she recently had about Team USA. Speaking with Taylor Rooks of The Bleacher Report,...
COLLEGE SPORTS・3 DAYS AGO
Sports Illustrated

Candace Parker on 2016 Olympics Snub: 'I Don't Think Geno Wanted Me on the Team'

Fresh off of leading the Sky to its first WNBA championship, forward Candace Parker did not shy away from speaking on why she believes she wasn't selected for Team USA in the 2016 Summer Olympics. The two-time WNBA champion told Bleacher Report's Taylor Rooks in a live interview on Tuesday...
NBA・4 DAYS AGO

Prior to the 2016 Rio Olympics, two-time WNBA MVP Candace Parker received one of the most shocking snubs in Team USA history. In the prime of her career at age 30, the all-time great hoops star was left off the roster after helping carry the team to two previous gold medal victories.
BASKETBALL・4 DAYS AGO
Insider

To commemorate the Chicago Sky’s 2021 WNBA title, FOCO has released bobbleheads of superstar Candace Parker and WNBA Finals MVP Kahleah Copper. The Parker bobblehead can be ordered here and the Copper bobblehead can be ordered here. Parker spent 13 seasons with the Los Angeles Sparks before joining her hometown Sky at the beginning of the 2021 season. Copper was named the WNBA Finals MVP after ...
CHICAGO, IL・8 DAYS AGO
firstsportz.com

The Golden State Warriors are sailing through the League smoothly like butter, and Stephen Curry is just being flawless o the court with his skills. They are destroying almost all the teams they face with the same dominance and intensity but it’s Curry who has won more fans than haters.
NBA・12 DAYS AGO

The Los Angeles Lakers will be without LeBron James when they battle the New York Knicks at Madison Square Garden tonight. What about Anthony Davis?. Davis woke up with a fever on Tuesday morning, putting his availability for tonight’s game in doubt. Whatever bug he was fighting won’t keep him from playing the Knicks at MSG.
NBA・11 DAYS AGO
ClutchPoints

Drake’s so-called ‘new parents’ speak out regarding a picture of them together that went viral after a Thunder vs. Rockets game. The couple that went viral consists of Renee, 71, and Jim, 75, who were sitting courtside beside the famous rapper at the Paycom center. Via USA TODAY. “Well, I...
NBA・1 DAY AGO
Larry Brown Sports

The brief glimmer of hope for Kyrie Irving to return to the court for the Brooklyn Nets this season seems to be fading away. New York City mayor-elect Eric Adams appeared Friday on CNN and was asked specifically about Irving, who remains ineligible to play due to the city’s COVID-19 vaccine mandate.
NBA・29 DAYS AGO
FastBreak on FanNation

Devin Booker sent out a tweet after the Phoenix Suns defeated the Golden State Warriors.
NBA・3 DAYS AGO

Although fans might have witnessed great sportsmanship and friendship in the NBA over the course of its years to signify the positive side of NBA yet the other side is as ruthless as it can get. The latest to justify this claim, came in the Heat vs Timberwolves showdown as the home fans dug deep to spring up Jimmy Butler’s alleged past affair on national television during the on-going match.
NBA・10 DAYS AGO
fadeawayworld.net

Devin Booker is one of the most talented young players in the NBA right now, having played in the 2021 Finals and leading the Phoenix Suns alongside Chris Paul in a season where nobody believed in them. He's very talented with the ball in his hands and one of the...
NBA・18 DAYS AGO
Larry Brown Sports

DeAndre Jordan appears to be on his way to getting DeMoted by the Los Angeles Lakers. Lakers head coach Frank Vogel told reporters this week that Dwight Howard will start for the team Friday against the LA Clippers. Vogel also said that the team will only use one center moving forward, per Harrison Faigen of Silver Screen and Roll.
NBA・2 DAYS AGO
FastBreak on FanNation

Steph Curry had an unbelievable shot in the game between the Golden State Warriors and the Portland Trail Blazers.
NBA・8 DAYS AGO
ClutchPoints

The Los Angeles Lakers are in the midst of a roller-coaster campaign that, for the most part, has not lived up to the expectations. Los Angeles is 7-6 on the season and has been incredibly disappointing so far, especially for Lakers fans. Every loss in La La Land is magnified. But their ugly 107-83 defeat to the Minnesota Timberwolves at home on Friday night deservingly warranted the negative headlines and the boos from the Staples Center crowd.
NBA・21 DAYS AGO
Fox News

Kyle Rittenhouse’s spokesperson hit back at LeBron James on Friday after the NBA superstar mocked the 18-year-old on Twitter for crying in court while testifying in his murder trial. "It absolutely was not [fake crying]. To LeBron, I would just say he should be paying more attention to the Lakers,"...
NBA・22 DAYS AGO
Sports Illustrated

The Golden State Warriors crushed the Brooklyn Nets 117-99 on Tuesday night to improve to a 12-2 record, which is the best in the NBA. Meanwhile, the Nets fell to 10-5, (but they did rebound on Wednesday night beating the Cleveland Cavaliers 109-99 to improve to 11-5). Kevin Durant was...
NBA・16 DAYS AGO
ClutchPoints

Klay Thompson just put in his first scrimmage session with the Santa Cruz Warriors of the G League and unsurprisingly, the All-Star shooting guard made an immediate impact. Thompson apparently made his first 18 shots in practice as he made it abundantly clear that rust isn’t going to be an issue for him moving forward.
NBA・5 DAYS AGO