TVLine Items: To All the Boys Spinoff Series a Go, The Great Trailer and More 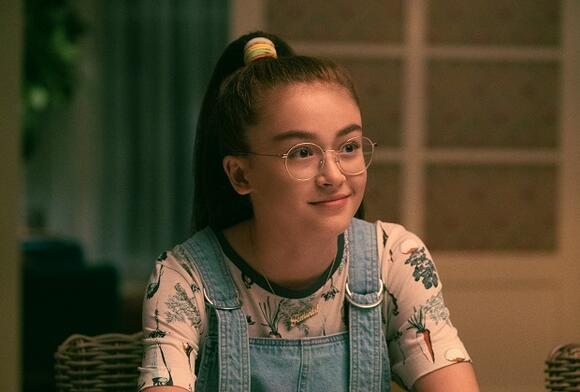 Netflix is expanding its To All the Boys franchise with a series order for the YA spinoff XO, Kitty .

Anna Cathcart reprises her movie role as Lara Jean Covey’s younger sister, Kitty Song Covey, who “thinks she knows everything there is to know about love” as a teen matchmaker, per the official synopsis. “But when she moves halfway across the world to reunite with her long-distance boyfriend, she’ll soon realize that relationships are a lot more complicated when it’s your own heart on the line.”

To All the Boys author Jenny Han and Sascha Rothchild ( The Baby-Sitters Club ) will serve as co-showrunners on the dramedy, which will consist of 10 half-hour episodes.

* Uma Thurman ( Imposters, The Slap ) will play The Huffington Post co-founder Arianna Huffington in the Showtime anthology Super Pumped , the first season of which chronicles the rise of Uber, on whose board Huffington served.

* The CW has pulled Killer Camp from its lineup and will fill its time slot with Masters of Illusion repeats, effective this Sunday, Oct. 24.

* Hulu has released a trailer for The Great Season 2, premiering with all 10 episodes on Friday, Nov. 19:

* Disney+ has released the trailer for the all-new animated feature Diary of a Wimpy Kid , premiering Friday, Dec. 3:

Don Johnson returned as Nash Bridges this Saturday night, with Cheech Marin’s Joe Dominguez again riding shotgun. Did the reunion movie for USA Network prove worthy of a full-on series revival? The two-hour movie — which producers, at least at one point, hoped would serve as a backdoor pilot for a full series relaunch — picked up with Nash and Joe chasing after Trevor Garrison, a baddie involved in trafficking teenage girls. After a gunshot from Joe accidentally explodes a nearby gas truck (but in doing so KO’s Trevor), both he and Nash nonetheless get a two-week suspension from the San...
MOVIES・5 DAYS AGO
TVLine

The CW this Sunday night commemorated the 50th anniversary of The Homecoming: A Christmas Story — the 1971 TV-movie that wound up siring The Waltons — with a remake. But did it evoke enough folksy charm? As with the source material, and set in 1933, The CW’s The Waltons’ Homecoming found the titular family readying for Christmas but also waiting… and waiting… for patriarch John Sr. (played by Ben Lawson) to come home for the holiday from his far-away job. (John’s already long bus ride was further slowed by a brewing snow storm, and is eventually derailed when the bus skids...
MOVIES・4 DAYS AGO
TVLine

Well well well, look who’s ready to siiiiiiiing us a soooooooong once more? On Thursday, Starz gave Outlander viewers a wee treat by releasing the opening title sequence ahead of the show’s upcoming Season 6. And in addition to tweaking the version of “The Skye Boat Song” that plays at the start of every episode — like the show has done many times before — we get a bunch of clues as to what’s ahead this season. Those who’ve read A Breath of Snow and Ashes, the Diana Gabaldon novel on which Season 6 is based, will be able to tie some of the...
TV SERIES・7 DAYS AGO
ETOnline.com

Nicolas Cage is getting some real recognition for his latest film, Pig. The celebrated star walked the red carpet at this year's Gotham Awards, and opened up about the critical love for his indie drama. Cage joined co-star Alex Wolff at the star-studded show in New York City and the...
MOVIES・3 DAYS AGO

Nicolas Cage has taken on some dark and intense roles over the past several years, and now the actor is set to play an iconic horror character. According to The Hollywood Reporter, Cage has been cast as Dracula in Renfield, a film about Dracula's often-misunderstood right-hand man. Nicholas Holt (The Great, X-Men: First Class) has been cast as the titular character and will face off against Cage's father of the bloodthirsty undead.
MOVIES・2 DAYS AGO
bloody-disgusting.com

New horror releases tend to slow down a bit on the road to the holidays, and honestly that’s not a bad thing because it gives us a chance to catch up on all the stuff we missed earlier in the year. During this past Halloween Season alone, so many new movies were released that we can guarantee nobody reading this is entirely caught up, so make good use of the downtime!
MOVIES・17 DAYS AGO
Variety

NBC announced its winter 2022 lineup, including the final season of “This Is Us,” which premieres on Jan. 4 at 9 p.m. On Mondays starting Jan. 3 “Kenan” will air its second season with a two-episode block at 8 p.m. and 8:30 p.m., followed by Jimmy Fallon’s variety game show “That’s My Jam” at 9 p.m., and “Ordinary Joe” will return with new episodes on this date at 10 p.m. In addition to “This Is Us,” Jan. 4 will see the time period premieres of “American Auto” and “Grand Crew” at 8 p.m. and 8:30 p.m., respectively, and the midseason premiere of...
TV SERIES・20 DAYS AGO
Popculture

Shang-Chi and the Legend of the Ten Rings is now available on Disney+, and star Meng'er Zhang hopes it won't be the last time she is featured on the streaming service. In an exclusive interview with PopCulture.com about the home video release, Zhang said that she has heard fans' hopes for her character's future. She admits after all the fan fervor, she is hoping Xu Xialing could get a spinoff of some kind as well.
TV SERIES・9 DAYS AGO

As Letitia Wright recovers at home in London from an injury suffered on the set of Black Panther: Wakanda Forever, her vaccination status may determine if she can return to work in America. CDC’s new guidelines released Monday demand that “non-citizen, non-immigrant air travelers must show proof of full vaccination to fly into the United States.” Wright, who portrays Shuri, the sister of Black Panther T’Challa, who was played by the late Chadwick Boseman, is not a U.S. citizen. Sources tell The Hollywood Reporter that the 28-year-old actress is not vaccinated against COVID-19.
CELEBRITIES・20 DAYS AGO
Popculture

Party Down is back! Starz has ordered a revival season of the comedy cult classic, according to a report by Deadline. Several of the show's most famous main characters are set to return. Party Down originally aired from 2009 to 2010 on Starz and was canceled after just two seasons...
TV SERIES・15 DAYS AGO
TVLine

True Story Finale Recap: Trust No One — Plus, Grade the Netflix Limited Series

It’s fitting that drinking got Kid into trouble at the start of Netflix’s True Story, because it was drinking that ultimately led him to the truth in the limited series’ intense finale. After seeing a very alive Simone/Daphne on an inebriated Carlton’s phone, Kid figured out the truth: His older brother had set him up. Kid then reached out to their mutual friend Julian, who works for the police department, to find out where Daphne lived. He needed to make sure she was indeed the same woman. He staked out her apartment, and old girl was definitely among the living. Kid confronted...
TV SERIES・6 DAYS AGO
Popculture

Schitt's Creek star Annie Murphy will be on the hunt for a new show after AMC canceled her new series, Kevin Can F**k Himself. The show was renewed for a second, eight-episode season, which will serve as its final outing. Created by Valerie Armstrong, the show was a parody of stereotypical sitcom plots and co-starred comedian Eric Petersen as the titular Kevin. An AMC rep confirmed to TVLine on Tuesday that the show's second season will be its last.
TV SERIES・2 DAYS AGO

Nicolas Cage has made a career of biting into his roles with seemingly reckless abandon, even as he strayed further and further from studio moviemaking and sunk his teeth into indie cinema. Now, in a deal sealed with a vampire’s kiss, Cage is returning to a big-studio movie and will play the meaty role of Dracula in Universal Pictures’ monster movie Renfield. Nicholas Hoult is starring as the titular character, the vampire count’s infamous acolyte and henchman, in the feature directed by Chris McKay, the helmer behind Amazon’s The Tomorrow War and The Lego Batman Movie. McKay and Robert Kirkman are producing along...
MOVIES・2 DAYS AGO
IndieWire

Before ‘West Side Story’ Hits Theaters, Stream the Original Movie on Amazon Prime

All products and services featured by IndieWire are independently selected by IndieWire editors. However, IndieWire may receive a commission on orders placed through its retail links, and the retailer may receive certain auditable data for accounting purposes. Steven Spielberg’s highly anticipated adaptation of “West Side Story” will be hitting theaters on December 10, which gives you plenty of time to catch up on the original film released in 1961. The Oscar-winning musical starring Natalie Wood, Rita Moreno, George Chakiris, and Russ Tamblyn, was directed by Robert Wise and Jerome Robbins with music from the late composer Leonard Bernstein, and lyrics by...
MOVIES・2 DAYS AGO
24/7 Wall St.

The Worst Christmas Movies of All Time

What if Christmas was funny? Or scary? Or cooky? Holiday movies ask these basic questions without diving much deeper. Some films never had a shot at being good while others seemingly had interesting ideas but very poor execution. Many were rated poorly with critics and audiences but still did well at the box office. People […]
MOVIES・2 DAYS AGO
TVLine

Judge Steve Harvey‘s court is in session. ABC has released a promo for the new one-hour unscripted courtroom comedy series, premiering Tuesday, Jan. 4 at 8/7c. In the program, “real-life people with real-life conflicts will present their case in [Harvey’s] courtroom, ranging from family disputes, unpaid bets, sour friendships and everything in between,” per the official description. “With the help of Nancy, his trusted bailiff by trade, Steve plays by his own rules, basing his courtroom on his own life experiences and some good old common sense.” Ready for more of today’s newsy nuggets? Well… * Disney+’s forthcoming Star Wars: Ahsoka series, starring Rosario...
TV & VIDEOS・3 DAYS AGO
TVLine

NBC may be taking up residence with Aunties, handing a put pilot commitment to a comedy executive-produced by comedian/host Amber Ruffin and written by Shantira Jackson (The Amber Ruffin Show, Peacock’s Saved by the Bell), our sister site Deadline reports. The project is loosely based on Jackson’s life and tells the story of what happens when a young woman goes back home to help raise the women who raised her. Serving as EPs alongside Jackson and Ruffin are Seth Meyers and Mike Shoemaker, who produce The Amber Ruffin Show via their production company Sethmaker Shoemeyers. Ready for more of today’s newsy nuggets? Well… *...
TV & VIDEOS・2 DAYS AGO
MarketWatch

What’s worth streaming in December 2021: ‘The Witcher,’ ‘Book of Boba Fett,’ ‘Matrix: Resurrections’ and more

With a winter avalanche of programming on the way, here's how to decide what to watch now, and what to save for another time
NFL・2 DAYS AGO
TVLine

The TVLine-Up: What's New, Returning and Leaving the Week of Nov. 28

This weekly feature is in addition to TVLine’s daily What to Watch listings and monthly guide to What’s on Streaming. With nearly 500 scripted shows now airing across broadcast, cable and streaming, it’s easy to forget that a favorite comedy is returning, or that the new “prestige drama” you anticipated is about to debut. So consider this our reminder to set your DVR, order a Season Pass, pop a fresh Memorex into the VCR… however it is you roll. This week, 17 new and returning series (including the final runs of Lost in Space and Money Heist), six fall finales (including The Equalizer...
TV & VIDEOS・5 DAYS AGO
metalinjection