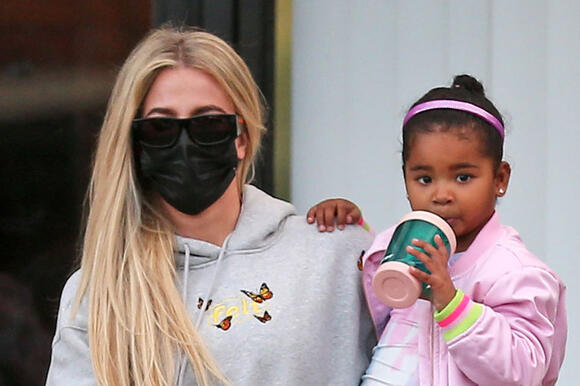 Khloe Kardashian’s off-duty style packs a powerful punch even in its most relaxed form.

The media personality stepped out with her 3-year-old daughter, True Thompson, on Monday evening in laidback fashion. For the outing, Khloe tapped up-and-coming brand FELT , which stands for For Every Living Thing, in the label’s coordinating butterfly-adorned sweatshirt and sweatpants.

When it came to footwear, the reality television star rounded out her look with sneakers from her once brother-in-law Kanye West’s Adidas Yeezy label. The Adidas Yeezy Boost 350 V2 includes engineered Primeknit uppers for a securing fit; the style comes in mixed shades of white and gray set atop a darkened midsole formed with Adidas’ signature Boost technology. Originally selling for $220, similar colorways of the lace-up pair now resell from $620 to $1,281 at Farfetch .

When it comes to Khloe Kardashian and the world of fashion, the social media personality founded her inclusive denim brand in 2016 and has since expanded the line to include workout-ready active gear, accessories, face masks and now shoes. Her inaugural Good American footwear collection debuted in December 2020 and featured a mix of heels, boots and more all available in sizes 4 to 14. The designs also come in a variety of widths, offering a total of 72 different sizing combinations for you to find the ideal fit.

In addition to new shoes from her own label, Khloe frequently sports styles from her brother-in-law Kanye West’s Adidas Yeezy line. More often than not the reality television star can be spotted in teetering heels rather than relaxed sneakers; one of her go-to brands for heels is also none other than Christian Louboutin.

Echo Khloe Kardashian in these sneakers inspired by her look.

Find more of Khloe Kardashian’s style over the years by clicking through the gallery.

Kylie Jenner’s date night style looks a little bit different than the rest. The media personality joined her beau Travis Scott for a mom and dad’s night out on Wednesday, grabbing dinner in glam fashion. The expecting mom herself showed off her look on Instagram in all-leather attire; her outfit included a slick baby bump-hugging little black dress layered under a slouchy overcoat. A sleek piece of leather attire became one of the biggest trends in 2020 — and now for fall 2021, too. Whether in the form of a dress, coat or, in Kylie’s case, both, the effortlessly cool material offers...
BEAUTY & FASHION・22 DAYS AGO
Footwear News

Kim Kardashian continues to stun in New York City. The 41-year-old business mogul stepped out on Tuesday evening from her hotel in an oversized, full-length brown tweed Balenciaga coat, a black top and sleek black leggings to meet friends at Zero Bond in SoHo. Kardashian, who has been embracing the fashion house with gusto lately, finished off her evening look with a pair of thigh-high Balenciaga boots with a likeness to distressed denim. This “Knife” style is currently sold out online. She accessorized her fall-ready ensemble with rectangular-shaped black shades, a fluffy black bag and sparkling statement earrings. The Skims founder has been making...
BEAUTY & FASHION・23 DAYS AGO
Footwear News

Kim Kardashian gave her signature bodycon style a sultry upgrade in head-to-toe velvet this week. Returning to her New York hotel after a reported dinner with actor Pete Davidson, the media personality went bold in a form-fitting velvet dress. The long-sleeve black number came equipped with a tight, ankle-length skirt and matching gloves, all accessorized with silver earrings and dramatic shades. To match the statement dress, the Skims founder continued the velvet theme of her look with similarly fabric-coated boots. The pointed-toe silhouette balanced atop a stiletto heel appearing to measure close to 4 inches in height, bearing resemblance to similar boot...
BEAUTY & FASHION・22 DAYS AGO
Allure

Halloween weekend might have ended, but that hasn't stopped celebrities like Kourtney Kardashian from flooding our Instagram feeds with snapshots of the festivities-filled weekend on Monday, November 1. Out of the two Halloween costumes that she posted to her feed, her debut as Alabama Worley (the female protagonist in the film True Romance) made us do a double-take.
CELEBRITIES・24 DAYS AGO

Censoring herself. Khloé Kardashian is careful not to post too much about her 3-year-old daughter, True, on social media because she wants to avoid the parenting police. “I’ve learned that you can’t just post anything because people will comment and say the craziest things,” the Keeping Up With the Kardashians alum, 37, told Cosmopolitan UK in her December 2021/January 2022 cover story, published on Friday, November 19. “I’m like, ‘What are you talking about?’”
CELEBRITIES・7 DAYS AGO
Bossip

Kanye West, 44, has reportedly been canoodling with model Vinetria, 22, “for a while now” before they went public over the weekend. Fans got to see West and Vinetria take the alleged romance public this weekend as they
NEW YORK CITY, NY・18 DAYS AGO
demotix.com

Kanye West seems to be in denial about his current relationship status. A few days ago, Ye made an appearance at Revolt TV when he was asked to comment on recent rumors about Kim Kardashian and Pete Davidson’s supposed romance. Wiggling his way out of the uncomfortable question, Kanye spun...
CELEBRITIES・17 DAYS AGO
Page Six

Kanye West’s new girlfriend, Vinetria, didn’t have the nicest things to say about his good pal Travis Scott before they started dating. During an Instagram Q&A in January 2020, a fan asked the model to name the “worst artists out now,” to which she responded, “Um idk. Travis Scott is annoying.”
CELEBRITIES・18 DAYS AGO

Kanye West appeared on N.O.R.E.’s popular “Drink Champs” podcast. The rapper criticized “SNL” for scripting jokes about his divorce during Kim Kardashian’s monologue. “That ain’t no joke to me. My kids want their parents to stay together. I want us to be together,” he said. Ye (formerly known as Kanye...
CELEBRITIES・21 DAYS AGO
Complex

As expected, Kanye West’s Drink Champs interview created quite the stir. During his two-and-a-half-hour sit-down, the polarizing multi-hyphenate spoke candidly about a wide range of topics, including his ongoing divorce from Kim Kardashian, his rocky relationship with Drake, his infamous VMAs moment with Taylor Swift, and his push back against cancel culture.
CELEBRITIES・20 DAYS AGO
People

Kim Kardashian West's recent outing with Pete Davidson in Palm Springs is turning heads for multiple reasons. The Keeping Up with the Kardashians alum, 41, seemingly confirmed her romance with the Saturday Night Live star, 28, on Wednesday when the two were seen holding hands in new photos. Some eagle-eyed...
PALM SPRINGS, CA・5 DAYS AGO
buzzfeednews.com

Kanye West is continuing to reflect on his split from Kim Kardashian — and on his role in the demise of their marriage. In recent weeks, Kanye has been increasingly vocal about his failed relationship with Kim, who filed for divorce in February after almost seven years of marriage citing “irreconcilable differences.”
PRESIDENTIAL ELECTION・15 HOURS AGO

The Kardashian family is once again in some legal trouble. Khloe Kardashian is facing a lawsuit from a photographer after using a photo of Bella Hadid wearing Good American jeans without the proper authorization. InTouch reports that Alo Photography is suing Kardashian for "copyright infringement" after she shared a photo of Hadid in 2017.
CELEBRITIES・2 DAYS AGO
musictimes.com

The reported romance between Kim Kardashian and Pete Davidson continues to be the talk of the town. However, Kanye West is said to be having trouble accepting that his soon-to-be ex-wife has moved on. After six years of marriage to the award-winning rapper, the KKW Beauty mogul filed for divorce...
ELECTIONS・2 DAYS AGO
ETOnline.com

Kanye West Says He's 'Made Mistakes' in His Marriage to Kim Kardashian: 'I Need to Be Back Home'

Kanye West is owning up to his mistakes and taking control of his narrative. The 44-year-old "Praise God" artist spoke about his marriage to Kim Kardashian while attending the Los Angeles Mission's Annual Thanksgiving event in Skid Row on Wednesday. During his speech, Kanye expressed his desires for him and Kim to get back together and needing "to be back home."
CELEBRITIES・2 DAYS AGO
The Hollywood Gossip

Khloe Kardashian has been in the public eye for her entire adult life. So she's equipped herself to handle the slings and arrows that are hurled at her daily by a never-ending procession of vicious trolls. But Khloe's daughter didn't ask to be born into a life of non-stop scrutiny...
CELEBRITIES・4 DAYS AGO
Newsweek

Rapper and designer Kanye West launched an ill-fated bid for the White House last year, during which he discussed elements of his and Kim Kardashian's marriage.
PRESIDENTIAL ELECTION・20 HOURS AGO
HOLAUSA

Kanye West wants to reconcile, but what does Kim Kardashian really feels?

Kanye West has made it clear he wants to reconcile with estranged wife Kim Kardashian, opening up about his feelings during a recent interview, however a close source to the reality star revealed she has “reached her breaking point” in their marriage. The 44-year-old rapper, who recently explained why he...
CELEBRITIES・14 DAYS AGO
E! News

Watch: North West Roasts Kim Kardashian for "Talking Different" on Instagram. Kardashian fans one more thing to be thankful for this Thanksgiving!. On the U.S. holiday on Nov. 25, Kim Kardashian and her 8-year-old daughter North West, the eldest of her and ex Kanye West's four children, launched the ultimate mother-daughter collab, a joint TikTok channel, to highlight their sweet bond and further document their adorable hijinks.
BEHIND VIRAL VIDEOS・15 HOURS AGO
KHQ Right Now

Kim Kardashian West sends Khloe Kardashian ideas for her Good American collections. The 37-year-old reality star founded the apparel line with Emma Grede in 2016, who is also the founding partner of Kim's lucrative shapewear brand, SKIMS. And Khloe has revealed her 41-year-old sister often gives suggestions and is "really...
RETAIL・7 DAYS AGO