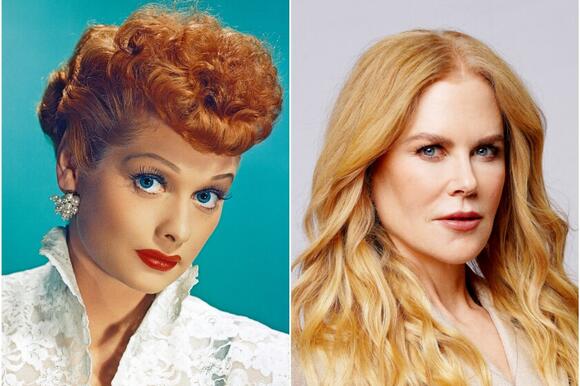 Apparently, it takes only a glimpse of dramatic actress Nicole Kidman as Lucille Ball to sell viewers on her portrayal of the comedy legend in "Being the Ricardos."

Kidman, whose casting as the "I Love Lucy" star has raised a lot of eyebrows , embodies the actress in Amazon Studios' first trailer for Aaron Sorkin's upcoming film. Released Tuesday, the preview pulls back the curtain on Ball's life with husband Desi Arnaz (Javier Bardem) as they are "threatened by shocking personal accusations, a political smear and cultural taboos."

But really, don't we all just want to see her in black and white, smashing grapes in a barrel, a reference to a beloved "I Love Lucy" episode ? (She does exactly that, very briefly, at the end of the tease.)

Before that, though, the flame-haired tycoon — the first woman to run a major TV studio, Desilu Productions — makes it clear that she knows her worth and that the CBS Studio heads should too. Even if Kidman's Ball isn't seen much in the trailer, she's very much heard.

"I am the biggest asset of the Columbia Broadcasting System portfolio. The biggest asset in the portfolio of Philip Morris Tobacco, Westinghouse. I get paid a fortune to do exactly what I love doing," she says in the voice-over as behind-the-scenes drama unfolds.

"I work side by side with my husband, who is genuinely impressed by me. And all I have to do to keep it is kill for 36 weeks in a row. And then do it again the next year," she adds.

Kidman as Ball reveals that she did the show so she and Arnaz could be together and that she "had no idea it would be a hit."

And it was. The high jinks-filled sitcom ran from 1951 to 1957 and has endeared new generations of viewers since then in syndication. But the backstage turmoil was far from the picturesque union she and Arnaz portrayed on TV.

The uptempo trailer takes viewers in front of a live studio audience on the "I Love Lucy" soundstage, features Bardem playing the band leader at Ciro's nightclub and teases news headlines about the couple's marital woes. It also features a peek at J.K. Simmons and Nina Arianda as William Frawley and Vivian Vance (a.k.a. Fred and Ethel Mertz), respectively.

This take from director Sorkin — of "The West Wing," "The Trial of the Chicago 7" and "The Social Network" fame — promises "a revealing glimpse of the couple’s complex romantic and professional relationship," according to the synopsis, and "takes audiences into the writers’ room, onto the soundstage and behind closed doors with Ball and Arnaz during one critical production week of their groundbreaking sitcom."

"Being the Ricardos" hits theaters Dec. 10 and streams on Prime Video on Dec. 21.

Nicole Kidman Transforms Into Lucille Ball In First, Up Close & Personal Look At ‘Being The Ricardos’

The Oscar-winning actress looked just like the iconic ‘I Love Lucy’ star in the debut trailer for the Amazon Prime biopic about the sitcom. Lucy, I’m home! Nicole Kidman gave fans the first in-depth look at her in character as Lucille Ball in the all-new Amazon Prime movie Being The Ricardos in the trailer released on Wednesday November 10. The 54-year-old actress was spot-on for the comedy legend in the new Aaron Sorkin written and directed movie, which she stars in alongside Javier Bardem, who plays Lucille’s husband and co-star Desi Arnaz as well as J.K. Simmons, Clark Gregg, and many more.
MOVIES・19 DAYS AGO
Outsider.com

On Sunday (November 21st) Lucie Arnaz, the daughter of the late actress Lucille Ball, took to her Instagram account to wish her husband, Laurence Luckinbill, a happy birthday. “Happy 87 to the best husband ever! He never quits,” Lucille Ball’s daughter proclaimed in the post, which featured some snapshots of the couple through the years.
CELEBRITIES・8 DAYS AGO
People

Nicole Kidman is "feeling incredibly grateful" this Thanksgiving. The Oscar winner, 54, posted a stunning portrait to her Instagram feed on Thursday, in which she posed on a sunlit beach alongside her husband Keith Urban. The country singer, also 54, wrapped his arms around Kidman's waist as she had one...
CELEBRITIES・4 DAYS AGO
Closer Weekly

Together they created one of the most iconic sitcoms ever in I Love Lucy, but Lucille Ball and Desi Arnaz were more than just actors on the small screen — they were also parents to two kids that you should get to know. After tying the knot in 1940, the...
FAMILY RELATIONSHIPS・10 DAYS AGO

Nicole Kidman and Keith Urban's vast $4.5million farm is a world of its own

The Undoing actress Nicole Kidman and her husband Keith Urban own properties all over the world, including residences in New York, Los Angeles, Nashville and Sydney, but it's their family farmhouse down under that will totally blow you away. According to Insider, the Australian estate was purchased back in 2008...
CELEBRITIES・10 DAYS AGO
Best Life

See Little Ricky, the Last Living Cast Member of "I Love Lucy," All Grown Up

I Love Lucy was one of TV's biggest hits throughout the 1950s. But, given that the show went off the air over 60 years ago, the main cast members of the series have since passed away, including Lucille Ball (Lucy), Desi Arnaz (Ricky), Vivian Vance (Ethel), and William Frawley (Fred). Now, only one cast member who had a regular, credited role on I Love Lucy is still alive: Keith Thibodeaux, who played Little Ricky.
TV & VIDEOS・1 DAY AGO
ramascreen.com

New Poster For BEING THE RICARDOS Starring Nicole Kidman

Check out this new official poster for BEING THE RICARDOS starring Oscar winners Nicole Kidman, Javier Bardem and J.K. Simmons. Amazon Studios will release BEING THE RICARDOS in theaters on December 10, 2021. Globally on Prime Video December 21, 2021. Written and Directed by Aaron Sorkin. Starring Nicole Kidman, Javier...
MOVIES・12 DAYS AGO
Outsider.com

Recently, Lucille Ball’s daughter Lucie Arnaz decided to spend some quality time with famous “Happy Days” star Linda Purl. For reference, Arnaz and Purl were also sisters-in-law for a period of time as well. Linda Purl married Desi Arnaz Jr. in 1979 and then the two divorced only a year later. Despite their short relationship, Lucie Arnaz still continues to be close to Purl.
CELEBRITIES・3 DAYS AGO

Aaron Sorkin got permission from Lucille Ball's daughter to show the darker side of her mother in Being the Ricardos: 'Take the gloves off'

Aaron Sorkin's upcoming movie Being the Ricardos will dive into the relationship between Lucille Ball and Desi Arnaz, and it won't sugarcoat either legendary actor. The Moneyball writer, 60, received permission from the I Love Lucy star's daughter Lucie Arnaz to show her mother as she was. 'We all had...
MOVIES・10 DAYS AGO
DoYouRemember?

Aaron Sorkin is the man behind the new film Being the Ricardos. He got permission from Lucille Ball and Desi Arnaz’s daughter Lucie to “take the gloves off” when writing the film. However, it seems they did disagree on a few things after the film was made. Aaron said, “We...
MOVIES・7 DAYS AGO
sunnysidesun.com

Nicole Kidman was terrified about Being the Ricardos role

Nicole Kidman had "massive trepidation" about playing Lucille Ball in 'Being the Ricardos'. The 54-year-old actress has confessed that she was extremely nervous about playing the 'I Love Lucy' star in the new biopic and credited the support of director Aaron Sorkin for helping her take on the part. Speaking...
CELEBRITIES・14 DAYS AGO
arcamax.com

Before you even see Nicole Kidman and Javier Bardem as TV's most beloved husband and wife in "Being the Ricardos," a biopic that follows the famous duo behind the classic "I Love Lucy" sitcom, you'll hear them. The pair get a slow reveal as Lucille Ball and Desi Arnaz, respectively, in the opening moments of the film, midfight and purposefully in contrast to their black-and-white TV personas.
CELEBRITIES・12 DAYS AGO

Will Nicole Kidman Deliver an Oscar-Worthy Performance in Aaron Sorkin’s ‘Being the Ricardos?’

Aaron Sorkin returns to the big screen after last year’s The Trial of Chicago 7 with the release of Being the Ricardos, recounting the politically turbulent relationship between Hollywood power couple Desi Arnaz and Lucille Ball during the 1950’s. The Academy of Motion Picture Arts and Sciences tend to favor films about old Hollywood, hence David Fincher’s Mank garnered the most Oscar nominations in 2020. Amazon Studios’ new movie could follow the same path.
MOVIES・13 DAYS AGO
Outsider.com

Being the Ricardos is set for release soon, and Aaron Sorkin seems excited. The director explained in a panel attended by Deadline that he wanted to explore the lesser-known story of the iconic comedian, producer and business owner, Lucille Ball. Lucille Ball is best known for her work on I...
MOVIES・14 DAYS AGO
Footwear News

While doing press for her new film “Being the Ricardos,” in which she plays iconic comedian Lucille Ball, Nicole Kidman stepped out in New York City last night sporting a chic ensemble complete with luxe loafers. Channeling dapper grandpa style inspiration for the screening and Q&A, the “Big Little Lies” actress styled a brown tweed blazer over a beige button-down blouse, which she wore tucked into a pair of straight-leg jeans in a medium-light wash. For footwear, Kidman opted for a pair of cognac brown leather penny loafers that featured a glossy sheen and embossed details on the vamp. The 54-year-old Aussie...
NEW YORK CITY, NY・11 DAYS AGO
Telegraph

Nicole Kidman’s last laugh: do actors really need to look like their subjects?

Humble pie was copiously scoffed this week when awards-watchers in Hollywood made it to the first screenings of Being the Ricardos. Aaron Sorkin’s insidery biopic of Lucille Ball and Desi Arnaz takes place over one tempestuous week behind the scenes of the revered 1950s sitcom I Love Lucy. From the...
CELEBRITIES・13 DAYS AGO

Nicole Kidman glittered in an enchanting ensemble at the 2021 InStyle Awards at the Getty Center in Los Angeles, California. The “Undoing” star arrived in a sequined purple Armani Privé dress from the brand’s Spring 2009 couture collection, which featured a slim-fitting silhouette and curved straps. The sleek number also included a flounced hem, adding to its feminine elegance. Kidman complemented her attire in dazzling fashion, pairing the dress with delicate diamond bracelets, necklaces and rings—adding to its glam factor. When it came to shoes, Kidman’s choice in footwear was equally glamorous. The “Aquaman” actress paired her dress with black heeled sandals....
LOS ANGELES, CA・13 DAYS AGO
filminquiry.com

BEING THE RICARDOS Trailer

Alright, let’s do this. Let’s dig into the Lucille Ball and Desi Arnaz biopic seemingly no one wanted. The project has been decried since it was first announced, with many hesitant to unearth the lives of two of the biggest comedy stars of all time. You know all about I Love Lucy, I’m sure, as it’s impossible to see a comedy montage without Ball’s antics popping up. The accolades and enduring love the show has received is well earned, but this movie looks to peel off the veneer the show put on the real-life couple.
MOVIES・5 DAYS AGO
Outsider.com

‘Being the Ricardos’ Featured As Part of Amazon’s December Highlights

Lucille Ball’s story in “Being the Ricardos” is one of Amazon Prime Video’s highlights for December. The movie is certain to be a smash. December is the perfect month to watch movies. Sitting by the fire and enjoying a glass of eggnog go perfectly with a new film on Amazon Prime Video. Starring Nicole Kidman, “Being the Ricardos” is a must-see this season. The streaming platform thinks so too.
TV & VIDEOS・1 DAY AGO