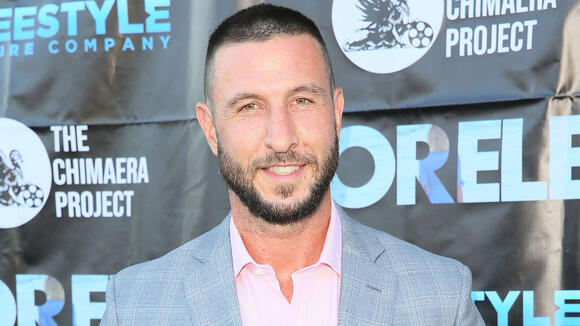 Hulu ’s limited series Candy , about an infamous 1980 murder case in Texas, has added Pablo Schreiber to its cast.

Schreiber ( Orange Is the New Black , Paramount+’s Halo ) will join Jessica Biel (who took over the title role from Elisabeth Moss) and Melanie Lynskey in the cast of the true-crime drama. He’ll play Alan Gore, a Silicon Prairie engineer, husband and father whose wife Betty (Lynskey) is mysteriously killed with an ax in their home.

Biel is playing Candy Montgomery, a woman who had a a loving husband with a good job, a daughter and a son, a nice house in the brand new Dallas suburbs. So why did she kill her friend from church with an ax?

Candy is one of two series about the Montgomery-Gore case currently in the works: Elizabeth Olsen and Lily Rabe are set to play the two women in Love and Death at HBO Max.

Schreiber stars as Master Chief in the Paramount+ (formerly Showtime) adaptation of the mega-selling Halo video game franchise. Filming on the the season has wrapped, and it’s due to premiere in 2022 after a years-long development and production process that has featured multiple showrunners and directors. He earned an Emmy nomination for Netflix’s Orange is the New Black ; other recent credits include Apple’s Defending Jacob, American Gods at Starz and feature First Man . Schreiber is repped by WME, Circle of Confusion, and attorney Karl Austen.

Netflix’s The Lost Daughter, directed by Maggie Gyllenhaal, dominated the 2021 Gotham Awards in New York on Monday night. The film, which went into the event as a five-time nominee, won four awards, including the top prize of best feature. After a quick speech thanking her loved ones and collaborators for best screenplay, Gyllenhaal declared she’d deliver a “real speech” for her second win of the evening, for breakthrough director. “It’s expensive to make movies,” said Gyllenhaal in her second acceptance speech. “Movies cost a lot of money. you can write them, but someone’s got to make them. So then the question becomes,...
MOVIES・2 DAYS AGO
The Hollywood Reporter

The end of Hulu’s Emmy-nominated comedy hit Pen15 has arrived. The breakout comedy, created by and starring Maya Erskine and Anna Konkle, will end Dec. 3 when the second half of season two drops on the Disney-backed streamer. The decision to end the series was made by Erskine and Konkle, who play 13-year-old versions of themselves on the comedy from Awesomeness TV. Sources note the duo were ready to take a break from the series that, in total, they’d been working on for nearly a decade. Other sources note Hulu very much wants to do additional seasons of Pen15 and is leaving...
TV SERIES・2 DAYS AGO
The Hollywood Reporter

Having just premiered her directorial debut Bruised on the service, Halle Berry is putting down roots at Netflix. The multi-hyphenate has entered into a multi-picture partnership with the streaming service, that will see her star in and produce Netflix feature films. The news comes just a week after Berry’s Bruised dropped on the service, where, according to Netflix, it became the No. 1 film of the week in the U.S., and No. 2 film, globally. The movie was streamed for 47.7 million hours in its first five days of release, according to the company. Says Berry, “The Netflix team has not only...
MOVIES・1 DAY AGO
bloody-disgusting.com

New horror releases tend to slow down a bit on the road to the holidays, and honestly that’s not a bad thing because it gives us a chance to catch up on all the stuff we missed earlier in the year. During this past Halloween Season alone, so many new movies were released that we can guarantee nobody reading this is entirely caught up, so make good use of the downtime!
MOVIES・17 DAYS AGO

Jackson White is set to star in upcoming drama series “Tell Me Lies,” Hulu confirmed to Variety. He will play Stephen DeMarco opposite Grace Van Patten’s Lucy Albright in the series, which is based on Carola Lovering’s novel of the same name. “Tell Me Lies” follows the tumultuous eight-year relationship...
TV & VIDEOS・12 DAYS AGO
ComicBook

Guillermo del Toro's upcoming horror anthology Cabinet of Curiosities has already amassed a number of talented performers, with the project recently gaining yet another with Harry Potter star Rupert Grint, per Deadline. Given the nature of the anthology series, each episode will see a fresh batch of performers under the helm of different filmmakers, with it being unknown at this time which episode Grint will be starring in. He joins a cast featuring the likes of Essie Davis, Luke Roberts, and Andrew Lincoln from filmmakers such as Panos Cosmatos, Jennifer Kent, and Vincenzo Natali. Cabinet of Curiosities doesn't yet have a release date.
MOVIES・1 DAY AGO
Popculture

Party Down is back! Starz has ordered a revival season of the comedy cult classic, according to a report by Deadline. Several of the show's most famous main characters are set to return. Party Down originally aired from 2009 to 2010 on Starz and was canceled after just two seasons...
TV SERIES・14 DAYS AGO
Herald & Review

I was shocked to hear that the FX on Hulu series “Y: The Last Man” was abruptly canceled! What happened? I was enjoying the show and looking forward to more episodes and seasons! Is there hope another streaming channel will pick this up? It cannot just leave off with episode 10.
TV SERIES・13 DAYS AGO

Jesse Eisenberg will take a starring role in the upcoming Hulu limited series Fleishman Is in Trouble, Deadline reported. Fleishman Is in Trouble will center around Eisenberg's titular character as he reenters the dating pool while in his 40s. Everything comes to a screeching halt, however, when his ex-wife disappears.
TV SERIES・13 DAYS AGO
ComicBook

Previously announced as being in the works with an ambitious slate of C-list Marvel characters getting their own cartoons, Marvel's Hit-Monkey is now streaming all ten episodes on Hulu. Voice actor Fred Tatasciore lends his talents to the titular simian killer, with the rest of the voice cast also including Ted Lasso himself Jason Sudeikis along with George Takei and Olivia Munn. Hit-Monkey joins Marvel's MODOK as the other animated show from the House of Ideas on the streaming service, but unlike that series which was stop-motion, Hit-Monkey takes on more of an anime-style look. The road to getting Hit-Monkey made has actually been a long one for creators series creators Will Speck and Josh Gordon who revealed to us they've been pitching it for a decade.
TV SERIES・14 DAYS AGO
GeekTyrant

Crossing Swords is a Hulu original show from the producers of Robot Chicken. It takes place in a medieval kingdom and centers on Patrick, who just wants to become a knight. We have a trailer for Season 2 to show you, and it looks just as funny and bizarre as Season 1. Here is the official synopsis:
TV SERIES・9 DAYS AGO
Deadline

EXCLUSIVE: Oscar-winning Nomadland director Chloé Zhao will help bring the overlooked tragedy of Vincent Chin’s murder and the subsequent civil rights case to TV as she boards Participant’s limited scripted series as an executive producer. Participant’s upcoming series, which is in development through an exclusive agreement with the Chin estate and executor Helen Zia, will be the only authorized telling of the watershed civil rights case following the 1982 murder. In the summer of 1982, the Chinese American engineer was assaulted at a bar and murdered by two white disgruntled autoworkers, who assumed Chin was of Japanese descent and blamed him for Japan’s...
TV SERIES・13 DAYS AGO

Marvel is releasing the adult-animated series “Hit Monkey” on Hulu based on the Marvel Comics of the same name. Fred Tatasciore is our hero Hit-Monkey, a Japanese snow monkey who became an assassin. He is guided by Jason Sudeikis’ Bryce. Geoge Takei (Shinji Yokohama), Olivia Munn (Akiko), Ally Maki (Haruka), and Nobi Nakanishi (Detective Ito) complete the cast.
TV SERIES・9 DAYS AGO
Deadline

EXCLUSIVE: Ernest Kingsley Jr. has been cast in the title role and Iola Evans also stars in Washington Black, the Sterling K. Brown-fronted adaptation of Esi Edugyan’s novel, which received a straight-to-series order at Hulu. Twilight Zone writer Selwyn Seyfu Hinds is adapting the limited series for 20th Television. Washington Black follows the extraordinary 19th-century adventures of George Washington (“Wash”) Black (Kingsley)– an 11-year-old boy on a Barbados sugar plantation who must flee after a shocking death threatens to upend his life. Brown will play the gregarious, larger-than-life Medwin Harris, who traveled the world after a traumatic childhood as a Black...
MOVIES・8 DAYS AGO
thefocus.news

Hulu has just released three-part docuseries The Curse Of Von Dutch: A Brand To Die For. It gives insights into the rise and fall of the brand but one name we didn’t expect to see crop up in the documentary is the Escobars. Von Dutch was all the rage in...
TV & VIDEOS・13 DAYS AGO
Primetimer

In This Fool, Estrada plays a self-described “punk a** bitch” who works at a gang-rehabilitation nonprofit. The Sopranos alum Imperioli will play Minister Leonard Payne, the founder of the gang rehab facility Hugs Not Thugs. "He is fatherly, has a bit of a hair-trigger temper, insightful and pragmatic," according to Deadline. "A former mortgage broker who specialized in foreclosures, Payne had a breakdown that started him on the road to his current non-profit, but he learned one thing along the way, which he imparts to Julio (Estrada): 'I have a bad habit of focusing on other people’s problems so I don’t have to deal with my own.'"
MOVIES・8 DAYS AGO

The story of Showtime’s popular crime series Ray Donovan will continue and get a proper conclusion with a new film coming out titled Ray Donovan: The Movie, and today we have the first trailer to share with you! I am a big fan of the show, so I couldn’t be more happy and excited that we are going to get some closure. It looks like we are going to get a great and intense story!
MOVIES・9 DAYS AGO