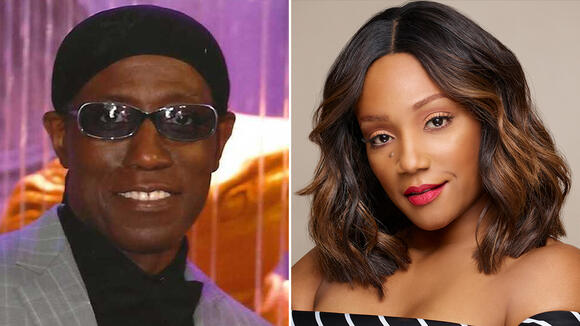 Luminosity will finance, produce and distribute feature films theatrically in the U.S. and handle foreign sales.

Back on the Strip reps the theatrical directorial debut of Chris Spencer, the creator and EP of Real Husbands of Hollywood and EP and scribe of Grown-ish. It follows a young man, Merlin (Spence Moore II), who moves to Las Vegas to pursue his dream of becoming a magician after losing the woman of his dreams. But when a costume malfunction reveals his physical “gifts,” he is recruited to become the frontman of an infamous male revue group. The comedy chronicles a series of escapades as Merlin tries to achieve magician success, pursuing his dream girl and finding family in the process.

The pic also stars JB Smoove ( Spider-Man: No Way Home, Curb Your Enthusiasm ), Faizon Love ( Couples Retreat, Elf ), Bill Bellamy ( Self Made, How to Be a Player ), Gary Owen ( Ride Along, Think Like a Man 1&2, Meet The Blacks 1&2 ), Raigan Harris ( Grown-ish ) and Piper Curda ( American Pie Presents: Girls’ Rules, Youth & Consequences ) and Moore II ( All American, HBO’s Who We Are ).

“We have assembled an amazing cast with the industry’s greatest comedic talent. It is a privilege to direct this film, one I co-wrote that has a cast of this caliber for my first feature film,” said Spencer.

The project was spearheaded by producers Taylor and Valdez; Snipes also serves as a producer with Haddish. Eric Daniel and Spencer co-wrote the film.

Martha De Laurentiis, an American film and TV producer and wife of Dino De Laurentiis, died early in the morning of December 4 after a long battle with cancer. “My mother was both a warm, generous, optimistic soul – my father always referred to her as his ‘sunshine’ – and a fierce protector,” her daughter Dina De Laurentiis told Deadline today. “A treasured wife, mother, and grandmother, and a friend who touched so many, as well as a nurturer – and protector – of creative people on the movies and television she loved. She put family first, but got up every...
CELEBRITIES・7 HOURS AGO
Deadline

Adam Rodriguez is playing Santa Claus on Friday, releasing the official trailer early to his upcoming holiday film A Christmas Proposal exclusively with Deadline readers (above). The CBS film premieres Sunday, Dec. 12 at 8:30 p.m. ET/8:00 p.m. PT and will be available on demand via Paramount+. Rodriguez— who executive produces and stars in the project—is proud to bring a holiday story featuring a Latino family to the small screen that focuses on the lives of the characters and steers clear of stereotypes. “It was my goal from the beginning [that we’re represented in a non-stereotypical way],” Rodriguez tells Deadline exclusively.”The script...
MOVIES・2 DAYS AGO
Deadline

Being the Ricardos writer-director Aaron Sorkin and stars Nicole Kidman, Javier Bardem, J.K. Simmons and Nina Arianda joined Deadline’s Contenders Film: New York showcase to discuss the Amazon Studios biopic of sorts about Lucille Ball and Desi Arnez, played by Kidman and Bardem, respectively. For the film, Sorkin chose to compress a series of true events in the lives of the iconic married TV stars into one production week of making I Love Lucy — the Monday table read through Friday audience filming. Those plot points include Ball being accused at the time of being a Communist, a crisis that could...
MOVIES・1 DAY AGO
Life and Style Weekly

Tiffany Haddish and Common (real name Lonnie Rashid Lynn) had a very low-key relationship for nearly two years, but the two have reportedly split. It appears the comedian, 41, and rapper, 49, have reportedly broken up, a source told People on November 29. The source said Tiffany and Common were “too busy” to have a “serious relationship.”
CELEBRITIES・6 DAYS AGO

With the seven episode limited series, True Story, now streaming on Netflix, I recently got to speak with Wesley Snipes and creator Eric Newman about making the show. If you’re not familiar with the series, True Story is centered around a world famous comedian nicknamed Kid (Kevin Hart) as he stops for performances in his hometown of Philadelphia and attempts to reconnect with his older brother, Carlton (Snipes). Upon his very first night back in town, things go awry, and Kid is forced to answer the question of how far he'll go to protect what he has. Newman, who served as showrunner of the Netflix hits Narcos and Narcos: Mexico, created the series and it also stars Tawny Newsome, Will Catlett, Paul Adelstein, Theo Rossi, Ash Santos, John Ales, Chris Diamantopoulos, Billy Zane, and Lauren London.
TV SERIES・9 DAYS AGO
ETOnline.com

Together or not, Common is celebrating Tiffany Haddish on her birthday. The 49-year-old entertainer took to Instagram on Friday to celebrate "the queen" on her 42nd birthday, amid their recent split. "Happy Birthday to the Queen @tiffanyhaddish! One of the most beautiful and dynamic and wonderful people I’ve ever known,"...
CELEBRITIES・2 DAYS AGO
HelloBeautiful

Tiffany served body on a Thanksgiving platter in this Stevie the Designer dress.
THEATER & DANCE・5 DAYS AGO
ETOnline.com

Wesley Snipes Says the Success of 'Blade' Remake Depends on the Fans: 'The People Decide It' (Exclusive)

Wesley Snipes is looking forward to seeing what Marvel will do with his legacy. Back in the '90s, Snipes starred as the half-human/half-vampire Daywalker in a trilogy of Blade movies, and now, more than 20 years later, Blade is being rebooted by Marvel Studios with Mahershala Ali taking up the mantle.
MOVIES・11 DAYS AGO

According to reports, the famous pair has called it quits
CELEBRITIES・6 DAYS AGO
Popculture

Tracy Oliver is back with a project putting friendships in the spotlight. The Girls Trip creator's new Amazon Prime Video series Harlem follows four Black 30-something women living in the Harlem section of New York as they navigate dating, life, and love. The series stars Meagan Good, Shoniqua Shandai, Grace Byers, and Jerri Johnson in the lead roles. The four friends rely on their relationships to get them through the ups and downs of life in the city. It's a similar theme to Oliver's 2017 box office smash.
MOVIES・2 DAYS AGO
jammin1057.com

After being a hot item for a year, Tiffany Haddish and Common have decided to end their relationship. A source told People magazine that “They are never in the same city together and both of them are just too busy for a serious relationship.”. Tiffany and Common first met in...
CELEBRITIES・2 DAYS AGO
IndieWire

“King Richard” star and Oscar contender Will Smith opened up his wallet for his cast members amid a reported $40-million payday, The Hollywood Reporter says. Smith produces and stars in the film as the father of Venus and Serena Williams, and per reports, after WarnerMedia shifted its Warner Bros. slate to day-and-date for 2021, he opted to give money to his fellow co-stars. The idea was to compensate the actors for lost theatrical returns. “Smith enjoyed a hefty payday — according to reports, as much as $40 million — and then personally wrote checks to the cast which includes Saniyya Sidney...
CELEBRITIES・29 DAYS AGO

The Remarkable Reinvention Of Wesley Snipes – How Much Is He Worth Now?

Wesley Snipes had an impressive career in the 90s starring in classics like New Jack City and his prominent role as the vampire hunter Blade in the MCU trilogy, but his decades-long run in Hollywood came to a halt after he was convicted of tax evasion. Now, it appears as though he's making a comeback.
MOVIES・5 DAYS AGO
Cinema Blend

With the Infinity Saga in the rear view, Phase Four of the Marvel Cinematic Universe is introducing a ton of new characters to help fill out the ranks. One of the highly anticipated heroes finally joining the franchise is the vampire hero Blade. OG Blade Wesley Snipes recently revealed what he thinks will decide the reboot’s success…. and it’s not Maheshala Ali.
MOVIES・11 DAYS AGO
TVLine

There are sibling rivalries, and then there are times where interactions become so contentious, tiffs lead to fisticuffs. This is what happens between Kevin Hart and Wesley Snipes‘ characters on the new Netflix limited series True Story. In the drama, which premieres this Wednesday, Hart plays Kid, a highly successful standup comedian who returns to his native Philadelphia for the first leg of his comedy tour. While there, he spends time with his older brother Carlton (Snipes), a felonious type who has been mooching off Kid for years. Without revealing too much, a series of unfortunate events occur, forcing Kid and Carlton...
CELEBRITIES・12 DAYS AGO
hotspotatl.com

Kevin Hart and Wesley Snipes are the most talked about duo thanks to their latest Netflix series, True Story. The series just landed on the streaming service last week, and it has already topped Netflix’s list of most-watched shows. It’s currently ranked ahead of the popular reality real estate show, Selling Sunset, The Queen of Flow, School of Chocolate and Cowboy Bebop.
TV & VIDEOS・5 DAYS AGO
UPI News

Nov. 26 (UPI) -- Dwayne "The Rock" Johnson gifted a Navy veteran a new truck, while Tiffany Haddish and Dane Cook helped serve free Thanksgiving meals this week. Johnson posted on Instagram Thursday photos of him handing over the keys of the vehicle to Oscar Rodriguez. The actor said Rodriguez...
CELEBRITIES・9 DAYS AGO
Business Insider

John Mulaney, Tiffany Haddish, Kevin Hart are among the comedians whose albums have been removed from the platform.
CELEBRITIES・1 DAY AGO
Variety

Writer-director Aaron Sorkin said there are three things he hopes audiences walk away with after watching his newest film, “Being the Ricardos,” about the lives of Lucille Ball and Desi Arnaz. “Mostly, I want them to have a good time during the two hours that were asked for their attention, realize that the lives of Lucy and Desi were considerably more complicated than Lucy and Ricky and pay less attention to Twitter,” he told Variety. Set in the backdrop of 1950s Hollywood, “Being the Ricardos” examines the complex marriage of the beloved “I Love Lucy” co-stars. The entire film spans one week of...
MOVIES・2 DAYS AGO