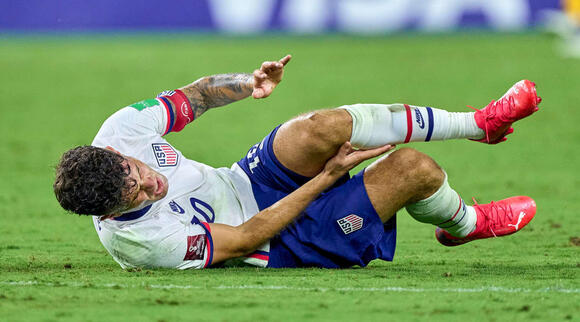 Chelsea winger Christian Pulisic has suffered a setback in his recovery from an ankle injury sustained Sept. 9 against Honduras.

Christian Pulisic is dealing with a series of injury setbacks, and the clock is ticking before the U.S. men's national team's November showdown with Mexico in World Cup qualifying.

The midfielder is the only absentee from Chelsea's Champions League squad to face Malmö on Wednesday as he continues to recover from an ankle injury sustained in the USMNT's 4-1 win against Honduras on Sept. 9 .

Originally, Chelsea manager Thomas Tuchel said Pulisic was only supposed to miss 10 days, but the winger has now missed more than a month, including the latest round of World Cup qualifying last week.

"At the moment, he has some setbacks from pain, not from major injury or from complications," Tuchel said in his Tuesday press conference. "It is simply the pain in the ankle that disturbs him.

Despite the setbacks, Tuchel said the former Borussia Dortmund phenom is closing in on a return. Other than the preseason UEFA Super Cup, Pulisic has only made one appearance for Chelsea— he scored a goal in the league opener against Crystal Palace—after contracting COVID-19 in August .

"Right now, we are very, very close," Tuchel said. "He was already so close to come to team training last week and had a little setback and a little reaction, nothing serious, but serious pain. From there, on we go.

"He is very impatient, of course. He does everything and we can see him suffer in every meeting and every time we meet him here in our training center, he is really suffering. He wants to be on the pitch and help us. Everybody is doing their very best, but unfortunately, the injury takes its time."

All eyes will be on the USMNT star—and Gio Reyna, also recovering from an injury—ahead of the Mexico match on Nov. 12 in Cincinnati. The U.S. currently sits second in Concacaf World Cup qualifying behind Mexico and is coming off a 2-1 comeback victory over Costa Rica .

Manchester United interim manager Michael Carrick benched Cristiano Ronaldo for his team’s crucial Premier League encounter with Chelsea. Carrick explained to Sky Sports his decision to leave out his top goalscorer this season. As per Goal:. “Cristiano is probably our standout name, but it’s just gameplan, ideas. I had a...
PREMIER LEAGUE・4 DAYS AGO
The Guardian

Clockwatch: Chelsea, Man City and Liverpool all won to keep the pressure on each other at the top of the table, while Everton fans are increasingly mutinous
PREMIER LEAGUE・1 DAY AGO
Absolute Chelsea

Report: Christian Pulisic 'Not Happy' at Chelsea Despite Injury Lay-Off

Christian Pulisic in happy at Chelsea despite being highly rated at the club, according to reports. Since his big-money move from Borussia Dortmund in 2019, Pulisic's career at Chelsea has been heavily affected by injuries. It has seen a frustrating stop start time for the 23-year-old with his best form...
PREMIER LEAGUE・13 DAYS AGO
Absolute Chelsea

Chelsea boss Thomas Tuchel is pleased with the return of Christian Pulisic to the side. The American came off the bench to score the Blues' third in their 3-0 win over Leicester City on Saturday, with Antonio Rudiger and N'Golo Kante also getting themselves onto the scoresheet. Victory at the...
PREMIER LEAGUE・11 DAYS AGO

Chelsea will be 'concerned' about Christian Pulisic's injury record, claims former USA goalkeeper Brad Friedel, who believes the winger's problems have 'stunted ability to be a regular' for Blues

Chelsea will have 'concerns' over Christian Pulisic's injury record, according to American compatriot Brad Friedel. The winger has suffered a number of injuries since his £58million arrival from Borussia Dortmund back in 2019. This season, Pulisic has been restricted to just two Premier League appearances, mainly because of an ankle...
PREMIER LEAGUE・13 DAYS AGO
Absolute Chelsea

Former Chelsea assistant coach and player Jody Morris has discussed the pressure he and Frank Lampard faced to play Christian Pulisic due to the American audience. The former Blue acted as Chelsea assistant between 2019 to 2021, departing with Frank Lampard back in January. Speaking on Jimmy Bullard's 'Off The...
PREMIER LEAGUE・11 DAYS AGO
LFCTransferRoom

Chelsea lead 3-0 thanks to another well worked goal scored by US International Christian Pulisic. Antonio Rudiger's pass found Hakim Ziyech down the Chelsea right who weaved his way into the box before finding Christian Pulisic who made no mistake slotting home from close range. Watch the goal here:. Frenchman...
PREMIER LEAGUE・12 DAYS AGO
Yardbarker

The player has enjoyed mixed fortunes since signing for the London club in January 2019 for a reported fee of over £55million from Borussia Dortmund. During his spell in west London the 23 year old has been very good in moments but due to injury has been unable to get consistent runs in the starting XI under Frank Lampard and now under Thomas Tuchel.
PREMIER LEAGUE・7 DAYS AGO

Is Watford vs Chelsea on TV tonight? Kick-off time and how to watch Premier League fixture

Chelsea face Watford this evening as they aim to keep hold of their slender advantage at the top of the Premier League.All three of the title race contenders are in action tonight and all three face testing away trips: second-place Manchester City travel to Steven Gerrard’s rejuvenated Aston Villa, while Liverpool face a Merseyside derby with Everton at Goodison Park.FOLLOW LIVE: Watford vs Chelsea – latest updatesChelsea’s fixture is on paper the easiest of the three, but Watford have shown promise recently under Claudio Ranieri, particularly going forwards with the threats of Emmanuel Dennis, Ismaila Sarr and Josh King are proving...
PREMIER LEAGUE・1 DAY AGO
BBC

Kai Havertz was your man of the match in our Player Rater as Chelsea secured a 2-1 win over Watford to stay top of the Premier League. The German forward provided a clever lay-off for Mason Mount to hit home the Blues' first of the evening.
PREMIER LEAGUE・1 DAY AGO
Sports Illustrated

Pulisic missed 12 Chelsea matches and a full World Cup qualifying window after being hurt on international duty with the U.S. in September.
SOCCER・1 DAY AGO
The Independent

When Thomas Tuchel comes in after games and scans the other results, he doesn’t automatically go to Liverpool or Manchester City. At least not yet.“There are some teams behind us who show consistency, who show quality, who show determination,” the Chelsea manager said last week. “This is what it is. You have a right to be proud of your competition here, in the Premier League, and for us it feels good because we are in the middle of that race and we want to stay here. I don’t know if it will settle down.”There is a bit of a...
PREMIER LEAGUE・2 DAYS AGO

It’s now 3-0, and 3 points for Chelsea against Leicester. Straight after the international break this could have been a tricky game, but Chelsea have made it look easy. Christian Pulisic has just added the third to wrap the game up, linking up with fellow substitute Hakim Ziyech in the box and finishing past the static Leicester defence.
PREMIER LEAGUE・12 DAYS AGO
elisportsnetwork.com

“I’m a proud Mexican-American” Ricardo Pepi details why he changed his childhood dream and made the decision to play internationally for the United States instead of Mexico. Ricardo Pepi and his family discuss the emotions they felt when the 18-year-old scored the tie-breaking goal in his international debut playing for...
MLS・12 DAYS AGO
The Independent

If you are already bored of the interminable debate over whether Cristiano Ronaldo is a help or a hindrance to Manchester United, bad news, this is just the beginning. It is not going away any time soon, partly because he is not going away any time soon either. Just as Old Trafford prepares to enter the gegenpressing era and even more attention is paid to what he does off the ball, he keeps winning matches with what he does on it.That might ignore some of the particular nuances in the arguments over Ronaldo’s role in this team, on both sides...
PREMIER LEAGUE・11 HOURS AGO
ESPN

Count the Ballon d'Or as one of those grand old institutions that's insanely popular. There are several reasons for it, too. There's history: The Ballon d'Or dates back to 1956, which means it predates the European Championships, yellow and red cards, substitutions, color TV, remote controls and of course, FIFA (the video game). There's the fact that top players really, really care about winning it: Clubs mount campaigns on behalf of their star players, guys like Cristiano Ronaldo (despite already having five of these at home) get annoyed when it gets canceled (like it did last year due to the coronavirus pandemic), while Bayern Munich striker Robert Lewandowski's face lit up like a child hearing reindeer footsteps on the roof when he found out he was among the favorites.
MLS・2 DAYS AGO
starsandstripesfc.com

The Champions League is back, and we have a smorgasbord of viewing options, highlighted by Christian Pulisic and Weston McKennie facing off today at 3pm. Let’s dive into the action!. Tuesday. Chelsea v Juventus, 3p on Paramount+, fuboTV, TUDN.com: Weston McKennie’s Juventus have already qualified for the knockout round, and...
MLS・9 DAYS AGO
ClutchPoints

Just when things were starting to look good for Chelsea’s star wing-back, Ben Chilwell, team boss Tomas Tuchel reveals the defender has suffered a partial ACL tear to his right knee. The Chelsea star wing-back has had a phenomenal start to his season—scoring 3 goals and handing out 1 assist...
PREMIER LEAGUE・6 DAYS AGO
The Independent

What the papers sayManchester United pair Anthony Martial and Donny Van De Beek have stepped down their plans to leave Old Trafford following the dismissal of Ole Gunnar Solskjaer, reports the Daily Mail. One name that is still linked with a move away from the club is Jesse Lingard, regardless of who takes the hot seat at the club.Christian Pulisic‘s future at Chelsea is increasingly uncertain, the Daily Express says, as Liverpool look to bolster their attack. Pulisic is said to be increasingly unsure over his role under Thomas Tuchel and the Merseyside giants could see him as a solution...
PREMIER LEAGUE・9 DAYS AGO