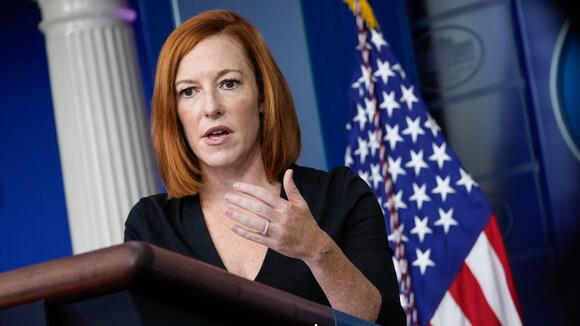 The White House on Tuesday pushed back against former President Trump ’s effort to block the release of documents to the committee investigating the Jan. 6 attack on the Capitol, saying executive privilege should not be used to shield evidence of “a clear and apparent effort to subvert the Constitution itself.”

“Our view, and I think the view of the vast majority of Americans, is that former President Trump abused the office of the presidency and attempted to subvert the peaceful transfer of power, something that had happened between Democratic and Republican presidencies for decades and decades throughout history,” White House press secretary Jen Psaki said Tuesday when asked to respond to Trump’s lawsuit. “The former president’s actions represented a unique and existential threat to our democracy that we don’t feel can be swept under the rug.”

“The constitutional protections of executive privilege should not be used to shield information that reflects a clear and apparent effort to subvert the Constitution itself,” Psaki added.

Trump filed a federal lawsuit on Monday against the select committee investigating the Jan. 6 assault on the U.S. Capitol in an effort to block the panel from obtaining Trump-era White House documents from the National Archives. He argued that the select committee has not demonstrated a legitimate legislative purpose to override his claims of privilege and that the committee’s request is unconstitutional because of its breadth.

"The Committee’s request amounts to nothing less than a vexatious, illegal fishing expedition openly endorsed by Biden and designed to unconstitutionally investigate President Trump and his administration," the lawsuit reads. "Our laws do not permit such an impulsive, egregious action against a former President and his close advisors."

The committee vowed to fight the lawsuit, accusing Trump of attempting to obstruct the investigation into the attack on Capitol by a mob of Trump supporters earlier this year.

The suit is the opening salvo in what is likely to be a prolonged and contentious legal fight over executive privilege and the legislative branch’s investigative authority. It’s unclear how Trump’s lawsuit will fare. The Supreme Court previously ruled during the Nixon era that former presidents have some authority to assert executive privilege.

I guess she will continue to ignore Biden's apparent effort to subvert the Constitution by intentionally not upholding the immigration laws that are in place. Not to mention his refusal to comply with the Supreme Court ruling that he had to return to the Trump stay in Mexico until after your immigration case has been heard in court...

Wyoming Republican Rep. Liz Cheney, vice chairwoman of the House select committee tasked with investigating the Jan. 6 attack on the U.S. Capitol, issued a warning to former President Donald Trump amid his posturing that he wanted to debate members of the committee: Lie, and there will be criminal penalties.
CONGRESS & COURTS・1 DAY AGO
Newsweek

To date, Trump has made at least four assertions of executive privilege since leaving office in an attempt to block the release of sensitive information.
CONGRESS & COURTS・2 DAYS AGO
The Guardian

Leading voting rights activists came away frustrated and alarmed from what they hoped would be a breakthrough meeting last month at the White House to discuss a strategy to pass federal voting rights legislation. There were high hopes for the 15 November teleconference between the White House and the leaders...
PRESIDENTIAL ELECTION・27 MINUTES AGO
POLITICO

The former president’s lawsuit to shield his White House records came under scrutiny in court on Tuesday.
WASHINGTON, DC・2 DAYS AGO

Washington — A three-judge federal appeals court panel weighing whether former President Donald Trump can shield his White House records from the House committee investigating the January 6 attack on the Capitol appeared skeptical of Mr. Trump's claims of executive privilege on Tuesday, the latest development in a legal standoff that could ultimately reach the Supreme Court.
CONGRESS & COURTS・2 DAYS AGO
Newsweek

Meadows to Testify Before Jan. 6 Committee as Other Trump Allies Cite Executive Privilege

Meadows came to an agreement with lawmakers, narrowly avoiding a referral of criminal contempt charges from the House panel.
CONGRESS & COURTS・2 DAYS AGO
The Guardian

Hours before the deadly attack on the US Capitol this year, Donald Trump made several calls from the White House to top lieutenants at the Willard hotel in Washington and talked about ways to stop the certification of Joe Biden’s election win from taking place on 6 January. The former...
PRESIDENTIAL ELECTION・3 DAYS AGO
orlandoweekly.com

Letters to the editor: 'If you don't want Donald Trump back in the White House in 2024, the Democrats need to change course'

In our Nov. 10 issue, opinion writer Jeffrey Billman's Informed Dissent column concerned the potential outcomes of Democratic gubernatorial candidate Terry McAuliffe's loss ("Democrats are bound to learn the wrong lesson from Glenn Youngkin's win"). In Billman's view, "rather than 'moving to the center' in the name of unlikely self-preservation, they'd be better served by locking in as much as they can before Republicans reclaim the majority and halt progress on climate change, health care, and wealth inequality." Several readers disagreed, and at least one offered a cogent argument as to why.
PRESIDENTIAL ELECTION・8 DAYS AGO

Neither George J. Terwilliger III, “In abandoning executive privilege, Biden rejects 200 years of history,” nor Ruth Marcus, “Executive privilege is the president’s to assert” [both Sunday Opinion, Nov. 14], addressed the possibility that a crime/fraud exception applies to former president Donald Trump’s invocation of privilege. A crime/fraud exception has applied to attorney-client privilege since well before our Constitution was written.
U.S. POLITICS・14 DAYS AGO
Newsweek

In this daily series, Newsweek explores the steps that led to the January 6 Capitol Riot. "Freedom never kneels except for God," retired Michael Flynn tweeted on December 2, sharing an advertisement from the We the People Convention, an Ohio activist group. In the ad, the Convention asks President Donald...
POTUS・21 HOURS AGO
Fox News

The White House on Tuesday responded to concerns voiced by a Moderna executive who suggested the current vaccines slotted to fight the coronavirus will not be enough to counter the new omicron variant. "It could go in a couple of different directions," White House press secretary Jen Psaki told reporters...
POTUS・2 DAYS AGO
The Guardian

Donald Trump tested positive for Covid-19 three days before his first debate against Joe Biden, the former president’s fourth and last chief of staff has revealed in a new book. Mark Meadows also writes that though he knew each candidate was required “to test negative for the virus within seventy...
PRESIDENTIAL ELECTION・2 DAYS AGO

As the Jan. 6 select committee investigation gathers momentum, Donald Trump has gotten several cronies to refuse to testify by invoking “executive privilege.” That’s absurd on its face: Much of the information Trump wants to keep buried doesn’t relate to the office of the presidency, but rather to his incitement of mob violence to remain president illegitimately.
POTUS・2 DAYS AGO
lawfareblog.com

Around about the beginning of the fourth hour of the U.S. Court of Appeals for the D.C. Circuit’s hearing in Trump v. Thomson on Tuesday, the members of the three-judge panel that heard the case began presaging their long digressions with the phrase, “In the interests of time.”. The court’s...
CONGRESS & COURTS・2 DAYS AGO
Yakima Herald Republic

Rittenhouse verdict is proof that white privilege exists in America

To the editor — For anyone who thinks "white privilege" in our country is imaginary, consider the following:. In 2012, a 12-year-old black child, Tamir Rice, was playing with a toy pellet gun when he was shot and killed by white police. He had not pointed the gun at police. No police were prosecuted.
PUBLIC SAFETY・8 DAYS AGO
News Channel Nebraska

More than a decade before he was assigned the criminal contempt case brought against Steve Bannon, Judge Carl Nichols was a top Justice Department lawyer deeply involved in pushing sweeping arguments in favor of shielding an ex-presidential adviser from congressional testimony. Nichols -- who was appointed to the bench in...
CONGRESS & COURTS・14 DAYS AGO
WashingtonExaminer

The House select committee tasked with investigating the Jan. 6 attack on the Capitol has subpoenaed the phone records of private U.S. citizens but has not subpoenaed the records of members of Congress, according to Indiana Republican Rep. Jim Banks and another GOP aide.
CONGRESS & COURTS・1 DAY AGO
New York Post

Symone Sanders, a chief spokesperson for Vice President Kamala Harris, will leave her post at the end of the year, reports said on Wednesday night. Sanders, 31, had served as a senior adviser on Joe Biden’s 2020 presidential campaign before taking the job at the White House. “Symone has served...
U.S. POLITICS・1 DAY AGO
WashingtonExaminer

The White House clarified Monday that states, cities, and counties that have dropped mask mandates do not necessarily need to reinstate them in response to the newly discovered coronavirus omicron variant.
POTUS・3 DAYS AGO
The Guardian

Former president pressed lieutenants about ways to delay certification of election result, plus vaccine is word of the year
POTUS・2 DAYS AGO