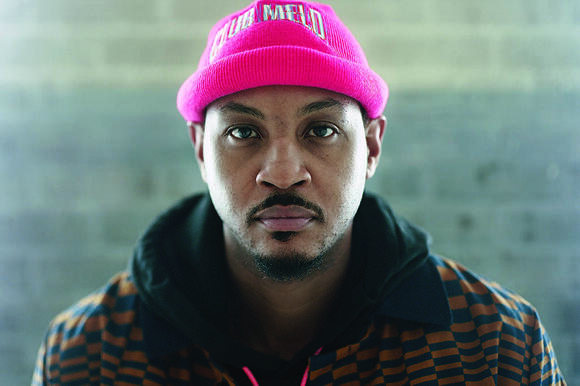 Carmelo Anthony will suit up for his 19th season in the NBA tonight with his new Los Angeles Lakers team and he also has a new pair of kicks for the special occasion.

As first reported by Bleacher Report’s BR Kicks on social media, Jordan Brand has created a special iteration of the Air Jordan 1 Low for the longtime sponsored athlete. According to the outlet, the style dubbed “Baltimore Crab” was made exclusively for Anthony. The shoe pays homage to the 37-year-old forward’s Baltimore roots with a color scheme that resembles a crab.

The exclusive sneaker features a brown-based nubuck upper that’s combined with premium croc-like overlay panels. Adding to the look are light blue hits on the tongue’s Jumpman logo, the Swoosh branding on the sides, and the Wings logo on the heel. Completing the look is a white midsole and a yellow outsole. The shoe is accompanied by special packaging, which appears to be modeled after Old Bay seasoning’s packaging. The lid lists out many of Anthony’s basketball accomplishments including winning an NCAA championship, being an Olympian, and his multiple All-Star selections in the NBA.

Although images of the Air Jordan 1 Low “Baltimore Crab” surfaced, BR Kicks confirms that the style won’t be released to the public.

Anthony is no stranger to receiving player-exclusive Air Jordan styles. In January, Anthony wore the all-red Air Jordan 35 “Carmerlot” PE against the Golden State Warriors. Jordan Brand later revealed that the look of the shoe was inspired by the baller’s well-known interest in wine.

Check it out here .

Miami Heat forward P.J. Tucker is the latest to honor designer Virgil Abloh and he did it by wearing a custom pair of Off-White x Air Jordan 5. Tucker laced up the Abloh-designed Off-White x Air Jordan 5 “Sail” that hit shelves last year during yesterday’s game when his Heat squad faced off against the Denver Nuggets, which can be seen with the series of photos shared by @MiamiHeat and @NBAKicks. Tucker personalized his pair of the coveted Air Jordan 5 collab by writing “Virgil will always be here” on the medial side of the left shoe as well as “Thanks...
NBA・7 DAYS AGO
Footwear News

Jordan Brand has a new Air Jordan Golf style dropping soon and it appears that fans won’t need to wait too long before they can get their hands on a pair. Sneaker leak social media account @zSneakerheadz shared images of the upcoming Air Jordan 4 Golf “Black Cat” on Instagram yesterday along with early release info pointing to a December launch. The shoe wears a stealthy black color scheme predominantly on the faux pony hair upper, the shiny patent leather eye stays, tongue, and ankle collar. The shoe’s heel counter also comes in black but incorporates a speckled-like design on the surface....
APPAREL・13 DAYS AGO
Footwear News

The A Ma Maniére x Air Jordan 3 was much more than a sneaker. It represented making the most of an opportunity when they were few and far between, as well as the ability to overcome struggle. Before James Whitner of The Whitaker Group accepted the FNAA Collaboration of the Year award, Jordan Brand chairman Larry Miller — who appeared on stage alongside Jordan Brand VP of footwear Kris Wright — applauded the beloved retailer on being a stellar voice for the Black community. “I’d like to thank James for always maintaining a focus on making sure that he represents the voice...
BEAUTY & FASHION・7 DAYS AGO
ClutchPoints

Carmelo Anthony will return to Madison Square Garden when the Los Angeles Lakers face the New York Knicks on Tuesday, bringing the 10-time All-Star back to his home city and the arena in which he starred from 2010-17. Considering LeBron James’s suspension and Anthony Davis’ illness, Anthony may claim the...
NBA・14 DAYS AGO

Only two active players remain from the 2003 NBA Draft, and both are with the Los Angeles Lakers. LeBron James was the number one pick, and he became an MVP and a champion. Meanwhile, Carmelo Anthony heard his name called two spots after James. He became one of the best...
NBA・13 DAYS AGO
SportsGrid

Kyle Goon of the Southern California News Group reports that Lakers forward, Carmelo Anthony, could feature in Tuesday’s home game against the Celtics. Anthony’s been battling flu-like symptoms, but all indications indicate him suiting up for the matchup. The Syracuse legend is averaging 14.3 points and 3.8 rebounds in his 19th season in the league. He’s also been the team’s best perimeter player as he’s shooting 42.9% from behind the three-point line.
NBA・10 HOURS AGO
FanBuzz

Kids of NBA legends are proving they’re more than a last name. Bronny James is lighting it up at Sierra Canyon. Zaire Wade is headed to the NBA G-League. Shaquille O’Neal’s kids are dunking throughout college basketball. As for Detroit Pistons and Chicago Bulls great Dennis Rodman, we got an...
NBA・18 DAYS AGO
CinemaBlend

Scottie Pippen has never been one to mince words, but the legendary basketball player has been particularly vocal over the past few weeks. The hall of famer recently marked the release of his memoir, Unguarded, in which he aired some brutally honest thoughts about former teammate Michael Jordan. Pippen has taken shots at Jordan for a number of reasons, from his style of play to his handling of The Last Dance docuseries. Fans and NBA veterans have since shared their own personal thoughts on the validity of his comments. And now, Charles Barkley has clapped back at Pippen with an honest take on the matter.
NBA・20 DAYS AGO

IMDb TV has announced the second season of UNINTERRUPTED’s Top Class: The Life and Times of the Sierra Canyon Trailblazers. The season will premiere Friday, Dec. 17, exclusively on IMDv TV, Amazon’s free streaming services. The new season will pick up after a quiet 12 months without prep sports. The...
TV & VIDEOS・15 DAYS AGO
doorcountydailynews.com

The Milwaukee Bucks outscored the Orlando Magic by 40 points in the first half alone to cruise to the easy 123-92 home victory. The Bucks' 77-36 lead at the break was not just their biggest halftime lead in franchise history, it was also Orlando's biggest deficit at the end of the first two quarters as well ever. The lead would grow to more than 50 points, but the Magic were able to chip away at the lead in the fourth quarter. Giannis Antetokounmpo and Khris Middleton each scored 12 points in limited work while Jrue Holiday led the Bucks with 18 points. Patrick Connaughton scored 17 points off the bench as seven different Bucks players registered double figures.
NBA・15 DAYS AGO
hotnewhiphop.com

Ben Simmons has been ducking the Philadelphia 76ers this season and he is refusing to play any games. The Sixers are understandably upset about this situation, and as a result, they have been fining Simmons millions of dollars. Essentially, they are withholding his checks, and in the midst of all of this, Simmons has stated that these measures have caused him great mental distress. Needless to say, the situation is easily the messiest to come out of the NBA this season.
NBA・12 DAYS AGO
SneakerFiles

The Air Jordan 4 Golf ‘Black Cat’ will make its debut during Spring 2022 and launch alongside some other exciting color options. While different from the traditional ‘Black Cat’ Air Jordan 4, this pair is similar to Olivia Kim’s Air Jordan 4 collaboration that dropped in 2019. Highlighted in all-Black while pony hair lands on the upper and we have tonal branding. The pair also has glossy wing eyelets, a Black Jumpman on the heel, while the outsole features seven removable spikes.
CATS・14 DAYS AGO

Oftentimes, Nike’s platform shoes are as eccentric as they are tall. Same can be said for Jordan Brand’s offerings save for the Air Jordan 1 Low LV8D, a new model that simply adds height to the beloved classic. Unlike the grey-on-white pair revealed earlier in the week, this colorway is...
APPAREL・11 DAYS AGO
sneakernews.com

Where To Buy The Women’s Air Jordan 11 “Animal Instinct”

The Air Jordan 11 has enjoyed 26 years in the spotlight. And while most of the model’s releases have nodded to direct moments in Michael Jordan’s storied career, pairs like the women’s “Animal Instinct” colorway releasing on November 26th have been less about the man and more about what he represents.
APPAREL・12 DAYS AGO
sneakernews.com

Throughout its 36-year-old history, Jordan Brand has been criticized for not offering women-exclusive footwear. Over the last five years, the NIKE, Inc. subsidiary has made strides on this front, while also modifying classics like the Air Jordan 1 Low with design cues catered to female sneaker enthusiasts. Yet to be...
APPAREL・13 DAYS AGO
Hypebae

The Air Jordan 1 "Bred" Gets Reimagined as a Platform

The Nike Air Jordan 1 “Bred” colorway continues to see reinvention, from an elegant satin makeup to a glossy patent leather holiday edition. The iconic sneaker is set to return as the Air Jordan 1 LV8D Elevated “Bred,” a lifestyle reworking of the Bred AJ1 with a chunky platform. The...
APPAREL・8 DAYS AGO
SneakerFiles

New Air Jordan 1 Low Crater Colorway is On the Way

For fans of the Air Jordan 1 Low Crater, a new colorway has leaked and will debut for the Fall/Winter seasons. This eco-friendly Air Jordan 1 Low comes constructed with Nike Regrind and Crater Foam. As well, it features Black suede on the overlays and Grey recycled twill on the base. The Swoosh utilizes grind rubber, exposed Blue stitching lands on part of the Swoosh, and the same shade appears on the liner, tongue branding, heel tab, and insoles. Finally, a White speckled midsole and Nike Grind rubber outsole finish the look.
SHOPPING・12 DAYS AGO
hypebeast.com

The crossover between fashion, footwear and the metaverse continues to be a hot topic of conversation and next up to expand on its digital initiatives is Fortnite and Jordan Brand who have reunited to commemorate the long-awaited return of the Air Jordan 11 “Cool Grey.” The two entities first linked up back in May of 2018 to launch Jordan-themed Cosmetics and a playable limited time mode, and now both parties have just announced all-new Outfits and Cosmetics in addition to a new interactive experience in ‘Fortnite’s Creative Mode titled Jumpman Zone.
APPAREL・7 DAYS AGO
Complex

Rip Hamilton has cemented his rightful spot in the annals of Detroit sports history. During his tenure in the Motor City from 2002 to 2011, he was a three-time NBA All-Star who helped the Pistons hoist the Larry O’Brien trophy in 2005 and compete in another Finals the following year. And who could forget his signature face mask that he wore like a piece of battle armor long after a face injury had healed? It wasn’t just the mask though. Rip’s on-court footwear rotation was also always on point, thanks to his status as a Team Jordan member, and consisted of numerous player exclusive colorways of Air Jordan models like the 2, 5, 12, and beyond.
NBA・13 DAYS AGO
hypebeast.com

Miami-based apparel and footwear retailer SoleFly follows up its Air Jordan 10 anniversary sneakers with an Air Jordan 1 Low “Carnivore” inspired by the Nike SB Dunk Low “Bison” from ‘93 and 2003 release of the Nike Air Carnivore. The collaborative pairs feature black suede on the laterals and heel...
APPAREL・13 DAYS AGO