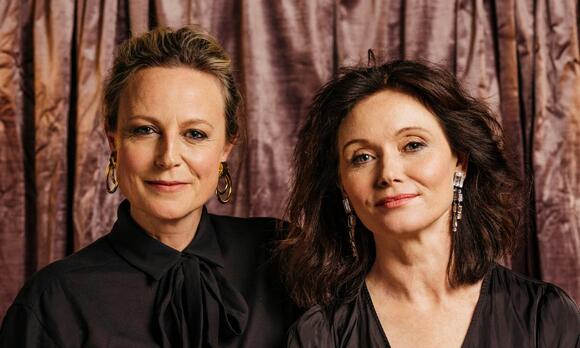 “The dominoes just fell,” Marta Dusseldorp says in her distinctive, dry timbre. She’s remembering the early days of the pandemic, when job after job in her industry toppled.

The star of Janet King and A Place to Call Home sits with her latest co-star, Essie Davis (Miss Fisher’s Murder Mysteries, True History of the Kelly Gang), in a light-filled corner of Hobart’s heritage Detached Gallery during a rehearsal break. Soon they’ll appear on stage together, for the first time, in a production of Jean Genet’s The Maids.

Related: ‘The show can’t always go on’: will regional theatre bounce back in the Covid-normal age?

Davis winces to recall those stressful times of early 2020. “I literally got off a plane from having opened two films, in America, England and Australia, and every cinema shut down,” she says. “I was like, ‘well, that was a lot of work, to just watch everything go” – Davis mimes an explosion. “The rug was pulled out from every live performer’s feet and our whole industry just went down the plughole.”

“It was pretty devastating,” Dusseldorp agrees. She was filming Foxtel’s Wentworth at the time. She and her husband, the actor and director Ben Winspear, had moved their young family to his home town of Hobart in 2017. Davis and her film director husband, Justin Kurzel, made the same move at almost the same time – she grew up here and has always called it home. Back in those pre-Covid times it seemed a simple-enough plan: be based in Tasmania and fly out to jobs across Australia and overseas.

Dusseldorp and Winspear had set up their own company, Archipelago Productions, before the pandemic. When it hit they quickly knuckled down, sought grants, and created opportunities for local performers to keep working on the island. One of those opportunities is The Maids. Dusseldorp calls it their “Covid baby”.

“Essie and I got together because of the pandemic,” she says. “Neither of us were away and we started chatting. We really wanted to work together so I started looking for plays where I could really work with Essie as opposed to going off when she came on – there are a lot of those for women – and I just fell back on The Maids.”

First performed in Paris in 1947, it’s a self-conscious play about two adult sisters, both maids, who role-play scenarios in which they murder their mistress. Dusseldorp says the play, based on a true story, is about “power games, and love, and hate, and stench”.

“He [Genet] is like Shakespeare, Arthur Miller, Gibson, Chekhov … he’s got the same sort of energy. I had heard of the translation Martin Crimp had done and I just loved it – the language in it … and I just found it really funny and dangerous and everything I’d hoped.”

Dusseldorp laments how difficult it was to find a play with two great female roles.

Both performers have an impressive back catalogue of theatre roles to their names – Dusseldorp spent three years contracted to the Actors Company with the Sydney Theatre Company, and Davis began her career with the Bell Shakespeare Company, straight out of Nida. They have been focusing on film and television roles over the past decade or so, partly because those roles have more family-friendly schedules, and they pay significantly more. They are both clearly thrilled to be returning to theatre, with its capacity for depth.

“I reckon I probably spent the first half of my career doing theatre,” says Davis, “and having the most fantastic roles, just brilliant, and then trying to move over into film, and into that international world, the roles in film and television were just really … ” Here Davis pauses, with a look of disgust, searching for the words. She mimes fluidity, and comes up with “watery gruel, in comparison to roast beef!” before letting out one of her signature warm, full-body cackles.

“And I’m also incredibly fortunate that that has changed, now, for me,” she says. “I’m getting to play some female roles in film and television that actually have the kind of mountain journey that the roles that I have played in theatre have had. But that’s been a really long career, getting to that opportunity, to get those kinds of roles, and for those kinds of roles to be there for women, because usually it was a man’s journey.”

This production also features another local actor, Stephanie Jack, as the character of Mistress. Winspear is directing, Justin Kurzel, whose much-discussed film, Nitram, was released in Tasmania last week, is designing the set and costumes. Augie March’s Glenn Richards, who also now lives in Hobart, is creating the sound compositions.

It’s the kind of entertainment that Hobart’s audiences are clearly thirsty for. The shows, which start at the end of the month, have all sold out well in advance. They have been invited to tour the production interstate but, with southern Tasmania in lockdown at the time of writing, and its borders firmly shut to much of the mainland, we will have to wait and see whether Covid lets this show go on.

• The Maids opens at Hobart’s Playhouse Theatre on 30 October . All shows have sold out

Sarah Parish: ‘I do get cast as a lot of killers​, a lot of tough women​’

Sarah Parish is known for her TV roles, often playing formidable, sometimes chilling, women. In recent times, she has been the titular antihero of ITV’s Bancroft, as well as making smaller, eye-catching turns in W1A, Industry and the Netflix hit Stay Close. Next up, after a long break, Parish returns to the theatre, starring in Trouble in Butetown at the Donmar Warehouse as Gwyneth, the landlady of an illegal boarding house in Cardiff during the second world war. Parish is married to the actor James Murray and they have a daughter.
4 HOURS AGO
The Guardian

Your kindness has been a wonderful gift, writes advice columnist Eleanor Gordon-Smith. Recognise this is not an ordinary friendship and they will show their gratitude in time
2 DAYS AGO
The Guardian

When the clocks struck midnight on new year’s eve and rang in 2023, Steve Busby was on the rooftop of a fancy apartment block in central London watching fireworks light up the Thames. The weeks leading up to Christmas had been a heady mix of meals, drinks, celebrations and friends, most of whom live in the same building of luxurious flats overlooking Westminster, a stone’s throw from Vauxhall, Waterloo and Tate Britain. Not exactly your average retirement home, then – and indeed Busby, a 72-year-old gay man, would never have considered moving to one of those. “What would I do? Risk coming out, or lie about who I am? I knew I could never do it.”
2 DAYS AGO
The Guardian

Was Beijing trying to sabotage talks with the US, monitor the speed of its military response, or just test Joe Biden’s mettle?
MONTANA STATE・13 HOURS AGO
The Guardian

‘Gets police out of the lives of drug users’: decriminalization move takes effect in Canadian province

East Hastings Street in Vancouver’s Downtown Eastside has long been the epicenter of Canada’s deadly opioid crisis. For years, lines of tents, discarded needles and open drug use have been common sights. Residents of the neighbourhood have repeatedly called for a radical change to the government’s approach to...
OREGON STATE・2 DAYS AGO
The Guardian