MacKinnon clears COVID protocols, could play for Avs at Caps 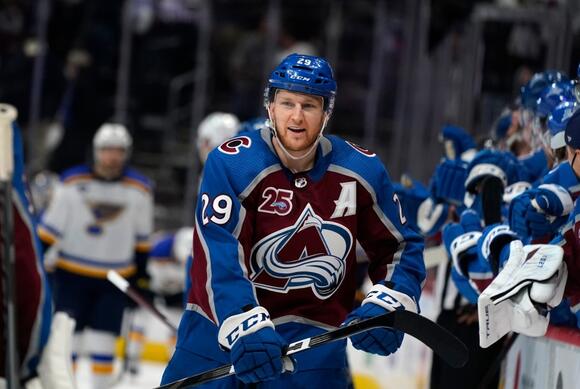 MacKinnon tested positive for the coronavirus last week and had been in the league’s COVID-19 protocols since Oct. 12. The three-time MVP finalist did not travel with the team Monday because he did not have the requisite number of negative coronavirus tests to be considered available.

Coach Jared Bednar said on his weekly radio show on Denver’s 92.5-FM that MacKinnon flew by himself Monday night. Under rules agreed to by the league and the players’ association, MacKinnon needed to test negative twice to be cleared to play.

MacKinnon, 26, missed Colorado’s first two games of the season. Because he is vaccinated, the 26-year-old’s absence was considered a hockey-related injury and he was paid during his time away.

Commissioner Gary Bettman said on opening night last week that the NHL had only four unvaccinated players out of roughly 700 on active rosters. He acknowledged the pandemic will still play a factor this season, such as vaccinated players missing games, and stressed the need for vigilance across the league’s 32 teams.

It seemed like a pretty comical moment towards the end of the New York Rangers 5-2 win over the Boston Bruins. Artemi Panarin and Bruins super-pest Brad Marchand were jawing at each other. The confrontation ended with Panarin throwing his glove at Marchand. ABC commentator, AJ Mleczko was in between the benches when the altercation took place. “I don’t mean to laugh,” she said. “It is heated and intense.”
NHL・2 DAYS AGO
MassLive.com

NEWARK, N.J. (AP) — There are a lot of new faces in the Boston Bruins’ lineup this season and they are learning how to play together at times. Two nights ago at home, they blew a third-period lead, giving up three goals in losing to Edmonton. The Bruins didn’t make the same mistake in New Jersey on Saturday.
NHL・15 DAYS AGO
CBS Boston

By Michael Hurley, CBS Boston BOSTON (CBS) — The Bruins’ annual day-after-Thanksgiving matinee brought with it some news about their former goaltender … and perhaps their future goaltender. Early in the second period, play-by-play announcer Sean McDonough revealed that he spoke with Tuukka Rask on Thursday night. Rask told McDonough that his rehab from surgery to repair a torn hip labrum is “going very well,” and that he’ll begin ramping up his skating beginning next week. “He hopes that he can play as early as January,” McDonough said of Rask, who also noted his desire to play for the Bruins. That update has Rask on the...
NHL・2 DAYS AGO
CBS Sports

Few athletes have been impacted by COVID-19 as much as Asia Durr, but the New York Liberty guard is finally on the comeback trail. On Monday night, she announced that she has been cleared to return to basketball after missing the past two WNBA seasons. In a video posted to...
NBA・13 DAYS AGO

DENVER — The Eagles will have Josh Sweat for Sunday afternoon’s game against the Broncos at Empower Field at Mile High. Sweat, 24, suffered a concussion last week against the Chargers and had been in the NFL’s concussion protocol all week. He was a full participant in Friday’s practice and has since been cleared by an independent neurologist.
NFL・14 DAYS AGO
knightsonice.com

On Tuesday morning, the Vegas Golden Knights announced that Jonathan Marchessault had entered the NHL’s COVID-19 protocol. Marchessault joins William Carrier on the list and will be inactive for tonight’s game against the Carolina Hurricanes. Carrier, who entered protocol on Monday, will be out the minimum 10 days, coach Pete DeBoer announced.
NHL・12 DAYS AGO
prohockeyrumors.com

The Arizona Coyotes have placed Johan Larsson in the COVID protocol, making him unavailable for the time being. That comes just minutes after the team placed both Christian Fischer and Dmitrij Jaskin on injured reserve, recalling Hudson Fasching, Jan Jenik, and Ben McCartney in their place. Larsson joins Andrew Ladd...
NHL・13 DAYS AGO
Hoops Rumors

Bucks wing Khris Middleton is set to take the floor for Milwaukee when the team faces off against the Lakers on Wednesday, according to Jim Owczarski of the Milwaukee Journal Sentinel. Middleton has been in the NBA’s health and safety protocols since testing positive for the novel coronavirus COVID-19 at the beginning of the month.
NBA・12 DAYS AGO

Another Vegas Golden Knight is now unavailable to the team, as Michael Amadio has been placed in the COVID protocol. His designation further explains why the team claimed Adam Brooks off waivers today, as they continue to deal with injuries and COVID-related absences this season. The team has also canceled their media availability for this afternoon.
NHL・11 DAYS AGO
abc17news.com

BEREA, Ohio (AP) — Cleveland Browns running back Nick Chubb has been activated from the reserve/COVID-19 list, giving the team one of its best players for a critical stretch of the season. Chubb, who is third in the NFL with 721 yards rushing despite missing three games, has been cleared to return after spending 10 days away from the team. He tested positive on Nov. 9 along with rookie punt returner/running back Demetric Felton, who has also been activated. Chubb and Felton sat out last week’s 45-7 loss at New England. It’s not yet known if Chubb will play Sunday against the Detroit Lions.
NFL・9 DAYS AGO
ABCNY

New York Islanders games have been postponed through at least Tuesday due to COVID cases, according to the NHL.
NHL・1 DAY AGO
CBS Sports

Joey Bosa was removed from the Chargers' COVID-19 list in time to play in Los Angeles' home game Sunday night against the Steelers, the team announced Saturday. The veteran defensive end was placed on the team's COVID-19 list on Tuesday. A three-time Pro Bowler, Bosa has tallied 5.5 sacks and...
NFL・8 DAYS AGO

Pittsburgh Steelers quarterback Ben Roethlisberger will be activated to the team's 53-man roster after passing the NFL's required COVID-19 protocols, according to the club's director of communications Burt Lauten. Roethlisberger is expected to start on Sunday night against the Los Angeles Chargers. He's flying separate from the team's charter plane...
NFL・8 DAYS AGO
Sportsnaut

LOUISVILLE, Ky. — Two and a half years after being the second overall pick in the 2019 WNBA Draft, former Louisville Cardinal Asia Durr has been cleared to once again play basketball. Durr tested positive for COVID-19 in early 2020 and is classified as a long hauler. She has missed...
LOUISVILLE, KY・11 DAYS AGO

The Colorado Avalanche had a gap in their season schedule, but that was planned. The Ottawa Senators had an unexpected break and are finally ready to resume playing. Ottawa had three games postponed because of a high number of COVID-19 cases, but eight players and associate coach Jack Capuano were activated from the protocol list Saturday in time for Monday's game at Colorado.
NHL・7 DAYS AGO
93.7 The Fan

The New York Islanders’ UBS Arena wasn’t having a Black Friday sale on goals, but the Pittsburgh Penguins managed to collect another victory on Long Island. The Penguins win 1-0 over the Islanders
NHL・1 DAY AGO