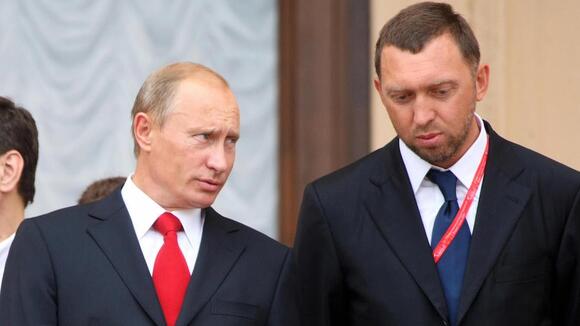 The FBI on Tuesday swarmed the Washington, D.C., home of Russian oligarch Oleg Deripaska, according to a report from NBC News.

A spokesperson from the FBI confirmed to The Hill that agents are conducting “court-authorized law enforcement activity.”

The reason for the FBI's action is not immediately clear.

Deripaska, who is connected to Russian President Vladimir Putin , was one of the Russian oligarchs and officials sanctioned by the Treasury Department in April 2018.

A U.S. diplomatic cable in 2006 also called him "among the 2-3 oligarchs Putin turns to on a regular basis" and "a more-or-less permanent fixture on Putin’s trips abroad," The Associated Press said.

He sued over the 2018 sanctions, but a U.S. judge dismissed his lawsuit.

Deripaska also had business ties to Paul Manafort , the former campaign chairman to former President Trump who was convicted of fraud charges as a result of former special counsel Robert Mueller ’s investigation into Russian interference during the 2016 election.

That investigation found that Manafort allegedly offered, in an email to an intermediary, to provide Deripaska with private briefings on the campaign weeks before Trump accepted the 2016 presidential nomination.

"If he needs private briefings we can accommodate," Manafort wrote in a July 7, 2016, email, The Washington Post reported.

Deripaska also has ties to British spy Christopher Steele, the author of a controversial and unverified dossier on Trump's alleged dealings with Russia. A Senate Intelligence Committee report later claimed that Deripaska had "early knowledge" of Steele's controversial report.

He was previously denied a U.S. visa due to his alleged "criminal associations and relationships", The Guardian reported in 2008.

He was later given diplomatic status by the Russian government, allowing him to enter the U.S. with immunity, NBC reported.

Who Is Rinat Akhmetov? Ukraine's Richest Oligarch Accused of Planning Coup With Russia

Ukrainian President Volodymyr Zelensky claimed during a Friday press conference he had evidence that linked the billionaire to planning a coup.
POLITICS・3 DAYS AGO
americanmilitarynews.com

This article was originally published by Radio Free Europe/Radio Liberty and is reprinted with permission. A Russian cultural group in the United States says it has shut down after some of its members were questioned by FBI agents, allegedly about potential violations of the U.S. law on foreign agents. The...
U.S. POLITICS・7 DAYS AGO
Washington Examiner

Russia is demanding that the United States agree to "legal guarantees" not to expand NATO and not to deploy intermediate-range ballistic missiles in Europe. Absent that, Vladimir Putin implies that war may follow. Putin is now demanding "agreements that exclude any further NATO moves to the east and the deployment...
POLITICS・17 HOURS AGO
albuquerqueexpress.com

Is everyone a Russian agent now

In recent years, governments have created armies of online warriors designed to fact-check alleged Russian ?disinformation.? Worryingly, these guardians of the truth are often more dangerous than the threat they claim to combat. Most analysts grounded in reality accept that Russia is not about to invade Ukraine. Still, the breathless...
POLITICS・4 DAYS AGO

U.S. intelligence officials “struggled” to brief a suspicious, insecure and often distracted Donald Trump when he was in the White House, according to a new account published by the CIA’s academic center. For the intelligence community, the Trump transition was “far and away the most difficult in its historical experience...
POTUS・3 DAYS AGO
Business Insider

Butina, who tried to infiltrate prominent GOP circles, pleaded guilty in 2018 to conspiracy and admitted to acting as an unregistered foreign agent.
POLITICS・13 DAYS AGO
Fox News

Chris Cuomo addresses CNN suspension: ‘It hurts to even say it, it’s embarrassing, but I understand’

Embattled CNN star Chris Cuomo addressed his suspension publicly for the first time on Wednesday, admitting he’s "embarrassed" but understands why people think his actions violated journalism ethics and plans to "respect" the network's investigation into his conduct. "Hey everybody, it’s Chris Cuomo, let’s get after it, quick note, the...
TV & VIDEOS・1 DAY AGO
Fox News

The House could vote on whether to charge Jeffrey Clark with criminal contempt as soon as Thursday.
CONGRESS & COURTS・1 DAY AGO
Telegraph

Agents from Israel’s spy agency Mossad recruited Iranian scientists to sabotage the nuclear facility where they were employed by smuggling in explosives disguised as boxes of food, it has been reported. The explosion at the Natanz nuclear facility in April completely destroyed the plant’s independent internal power system, which powered...
INDUSTRY・18 HOURS AGO
Ok Magazine

President Joe Biden and First Lady Jill Biden decorated the White House for the holidays. The State Dining Room celebrated the “Gift of Family,” with stockings hanging over a stunning fireplace to represent each member. Six adorable stockings were hung for each of their grandchildren, but Hunter Biden’s daughter, who...
PRESIDENTIAL ELECTION・21 HOURS AGO
The Independent

The Capitol riot suspect who admitted to new felonies while representing himself compared himself to Jesus, new court filings show

Brandon Fellows submitted several filings in which he lashes out against his previous counsel, and once again admitted to committing obstruction.
POLITICS・12 HOURS AGO
Indy100

A new viral video is making just about everyone cringe.In the clip, an emotional alleged MAGA rioter is seen starting to cry in front of FBI interrogators as he is being questioned. When asked about former President Donald Trump calling him to Washington D.C the waterworks NBC journalist Scott MacFarlane shared the clip on Twitter. He wrote, “NEW: Court orders release of video of FBI questioning US Capitol breach defendant Daniel Rodriguez. This is a first listen in the interrogation room. He questions election, cites Biden’s rallies and says he’s long been an InfoWars fan.”NEW: Court...
PUBLIC SAFETY・1 DAY AGO
WashingtonExaminer

Wyoming Republican Rep. Liz Cheney, vice chairwoman of the House select committee tasked with investigating the Jan. 6 attack on the U.S. Capitol, issued a warning to former President Donald Trump amid his posturing that he wanted to debate members of the committee: Lie, and there will be criminal penalties.
CONGRESS & COURTS・1 DAY AGO
CNN

(CNN) — The news that former Trump White House chief of staff Mark Meadows is now cooperating with the House's January 6 select committee investigation represents a clear and present danger to the former president and his attempts to rewrite the history of that fateful day. "He has produced records...
PRESIDENTIAL ELECTION・2 DAYS AGO

Roger Stone says Trump dismissed him when first encouraging presidential run: 'You're out of your mind'

Republican political operative Roger Stone spoke candidly about his 50-year career at the center of American politics and his decades-long relationship with former President Donald Trump in a new episode of Fox Nation's "Tucker Carlson Today." Stone, who served as an informal adviser to Trump’s 2016 campaign, recollected on an...
PRESIDENTIAL ELECTION・1 DAY AGO
Popculture

The U.S. Supreme Court agreed on Nov. 15 to take on a major case involving Taco Bell franchisee Sundance Inc., which owns over 150 franchises of the fast-food chain nationwide. The case is Morgan v. Sundance Inc., which began as a lawsuit from Robyn Morgan, who worked at an Iowa Taco Bell, and it later became a class action against the company. She accused Sundance of not paying her and her co-workers all they were owed.
LAW・16 HOURS AGO
Business Insider

Jena Griswold told The Washington Post that there was a concerted campaign to place Trump allies in roles overseeing elections.
COLORADO STATE・2 DAYS AGO
Business Insider