Jamie Foxx opens up on why he has never married 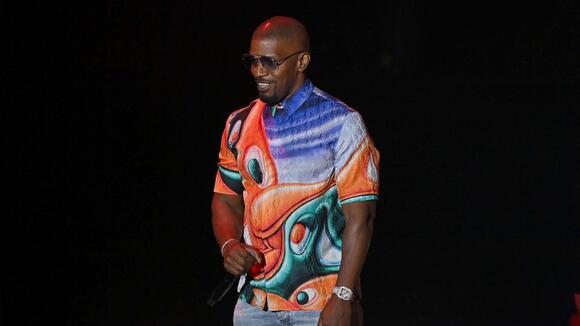 Jamie Foxx recently opened up on why he doesn't believe marriage is for him.

"The 2.5 children, the wood paneling on the station wagon and the cottage, I didn't think that was for me," Foxx shared during a recent interview with E! News.

He said he thinks his relationships with daughters Corrine Foxx, 27, and Annalise Bishop, 12, are stronger because he steered away from that tradition.

MORE: Jamie Foxx talks new book, ‘Act Like You Got Some Sense’

Pointing to some of his friends' failed marriages as an example, he shared, "Growing up, Corrine was like, 'Well people are married, and that's what they have, my friends. But then a lot of those marriages ended up not doing well as the kids got older.'"

"Unfortunately, we saw the kids get fractured from their families," he continued. "Us, we actually came together more, so I don't know what that is, I just know that it is different but it's a whole lot of love."

The 53-year-old "Soul" star added, "The pressure of me being married, I don't think we've even had conversations about it. They just love their daddy, and I just keep moving."

During another interview on "Good Morning America" on Monday, Foxx spoke more about how much family is prioritized in his life.

"I always live in a place of guilt by sometimes living my life if I feel like I haven't put the time in with my kids," he said.

"There's nothing like that -- there's no feeling that you get when your kid smiles and is happy to see you coming," he added.

The actor said he is very "proud" of his daughters.

"She's a producer on my show now, doing the TV show," he said about Corrine, also mentioning his new Netflix series she is working on, "Dad Stop Embarrassing Me!"

"Her last game before COVID, she was playing with the boys, she had 21 points, 17 rebounds, 5 blocks," he gushed.

he never married because he want have to split his money in half! just pay child support, maybe break the mother off a little bit and you done! stay free as a bird!

Jurnee Smollett has landed the female lead in “The Burial,” a new courtroom drama from Amazon Studios. The “Lovecraft Country” actor will star opposite Jamie Foxx and Tommy Lee Jones in the Maggie Betts-directed project. Based on a true story, the film follows a bankrupt funeral home owner who decides to sue a rival businessman over a handshake deal gone wrong. The owner hires a flamboyant attorney (Foxx) to handle the case. Smollett will play Foxx’s opposing counsel, sources said. Betts is directing from a script written by Doug Wright. Producers on the film include Bobby Shriver via his Bobby Shriver Inc....
MOVIES・13 DAYS AGO
epicstream.com

Jamie Foxx Hints He Is 'Chasing Spiders' in Spider-Man: No Way Home

Should I give up or should I just give keep chasing spiders... There have been a lot of speculations from fans that Tobey Maguire and Andrew Garfield will be appearing in Spider-Man: No Way Home. While the newly-released second trailer didn't confirm the long-time rumor, it did confirm however that the villains from the past Spider-Man films will be returning. Now, one of them took to social media and hinted that the long-time rumor might be true after all.
MOVIES・13 DAYS AGO
Cinema Blend

Spider-Man: No Way Home’s Jamie Foxx Is Having Fun Teasing His Return As Electro

Electro is back! And not just any old Electro, it's Jamie Foxx’s Electro, who we last saw in 2014's The Amazing Spider-Man 2. After over a year of rumors that the Oscar-winning actor would be returning to Marvel to reprise the role, the studio officially confirmed it with the latest trailer for Spider-Man: No Way Home. In light of the news, Jamie Foxx is teasing Max Dillon being back as well.
MOVIES・12 DAYS AGO
digitalspy.com

Birds of Prey star Jurnee Smollett has landed her next lead role alongside Jamie Foxx in a courtroom drama from Amazon, Variety has reported. Titled The Burial, the film follows a bankrupt funeral home owner who sues a rival businessman over a deal gone wrong, hiring a flamboyant attorney (Foxx) to handle the case.
MOVIES・10 DAYS AGO

Electro star Jamie Foxx has shared a fitting response to the latest Spider-Man: No Way Home trailer. Marvel Studios set the internet on fire this week when they dropped the second trailer for Spider-Man: No Way Home. The latest look at the Spidey threequel confirmed the return of additional villains, including Jamie Foxx’s Electro, Rhys Ifans’ The Lizard, and Thomas Haden Church’s Sandman. Willem Dafoe and Alfred Molina will also be returning as Green Goblin and Doctor Octopus, respectively.
MOVIES・13 DAYS AGO
SuperHeroHype

Tom Holland, Jamie Foxx Promote Spider-Man: No Way Home Tickets. The time is drawing near to preorder Spider-Man: No Way Home tickets. So near, in fact, that it’s tomorrow. And two of the film’s stars, Tom Holland and Jamie Foxx, made a video to remind everyone. Foxx’s role as Electro had been kept officially under wraps, but thanks to the most recent trailer, we now know he’s returning as Electro. But not necessarily the same Electro as in The Amazing Spider-Man 2. This version, without the blue skin and in a comics-colored outfit, appears to use a mini ARC-reactor rig like Whiplash in Iron Man 2.
MOVIES・3 DAYS AGO
GMA

Michael B. Jordan talks 'the moment I've waited for my entire life'

The actor sounds off on his career and "Creed III."
CELEBRITIES・2 HOURS AGO
Life and Style Weekly

Tiffany Haddish and Common (real name Lonnie Rashid Lynn) had a very low-key relationship for nearly two years, but the two have reportedly split. It appears the comedian, 41, and rapper, 49, have reportedly broken up, a source told People on November 29. The source said Tiffany and Common were “too busy” to have a “serious relationship.”
CELEBRITIES・2 DAYS AGO

Popular TikToker Noah Beck has explained why he’s not planning on drinking alcohol after he turns 21 in May 2022. Noah Beck is one of TikTok’s most popular stars, with over 30 million followers on his account. He started posting videos to the app in 2020 where he quickly went viral and gained a loyal fanbase before joining well-known content house, the ‘Sway House.’
BEHIND VIRAL VIDEOS・9 DAYS AGO
GMA

Tayshia Adams and Zac Clark, who met during her season of "The Bachelorette," have ended their engagement.
CELEBRITIES・9 DAYS AGO
People

Michael B. Jordan on Being Public About Lori Harvey Relationship: 'I Finally Found What Love Was'

Michael B. Jordan is happily in love. The 34-year-old A Journal for Jordan actor celebrated his one-year anniversary with girlfriend Lori Harvey earlier this month, a milestone that came after he made their relationship Instagram official in January following months of rumors. Speaking with The Hollywood Reporter for the magazine's...
CELEBRITIES・10 HOURS AGO
iHeartRadio

According to reports, the famous pair has called it quits
CELEBRITIES・2 DAYS AGO

Chris Tucker Reveals Why He Never Returned to the Friday Franchise

Chris Tucker has a few celebrated roles from his film career, and one that fans have always wanted to see him reprise is Smokey from the first Friday film in 1995. On Friday, the Fifth Element star, 50, reflected on his decision to never go back to the franchise, revealing one somewhat surprising reason.
MOVIES・15 DAYS AGO
TODAY.com

J.Lo opens up about if she’d get married again: ‘I still believe in happily ever after’

Three marriages and a recently broken off engagement have not turned Jennifer Lopez off to the thought of one day walking down the aisle again. While promoting her upcoming romantic comedy "Marry Me" with Owen Wilson and Maluma, the 52-year-old actor and pop superstar was asked by Hoda Kotb in an interview that aired on TODAY Thursday if she would ever get married again.
CELEBRITIES・13 DAYS AGO
BET

As Grammy Award-winning actor Tiffany Haddish continues to prepare for her role as track and field Olympian Florence “Flo-Jo” Griffith Joyner in an upcoming biopic, she has revealed that her training sessions have become a bit more personal. According to Shadow And Act, Haddish shared that she has been working...
CELEBRITIES・1 DAY AGO
KHQ Right Now

Jeremy Renner has no plans to ever rewatch 'Avengers: Endgame'. The 'Hawkeye' star has opened up on the emotional experience of watching the movie with his castmates, and it's not something he wants to revist any time soon. He told BBC Radio 4: "I saw it at the premiere, but...
MOVIES・5 DAYS AGO
kpopstarz.com

TVXQ Changmin Shares Why He Decided to Marry His Wife, His Answer Proves He's the Standard

TVXQ Changmin, who is a married idol for about a year, opened up on the reason he chose to tie the knot with his non-celebrity wife. In the same broadcast, the idol also talked about babies, and once again raised the standards for being the ideal father and partner in life!
TV & VIDEOS・9 DAYS AGO
Ashe County's Newspaper

Sandra Bullock 'wishes she had same skin colour as her kids'

Sandra Bullock "sometimes" wishes she and her children were the same skin colour. The 57-year-old actress has two adopted African-American children - Louis, 11, and Laila, nine - and Sandra admits that having matching skin might have made their lives "easier". In a 'Red Table Talk' interview, Sandra said: "To...
CELEBRITIES・1 DAY AGO
iHeartRadio

Indian actor Yusuf Hussain has passed away at the age of 73 after contracting COVID-19. The Tribune India reports that Hussain, best known for his roles in Dhoom 2, Raees, and Road to Sangam passed away on Saturday at Lilavati Hospital in Mumbai. His son-in-law, filmmaker Hansal Mehta, who is...
PUBLIC HEALTH・27 DAYS AGO