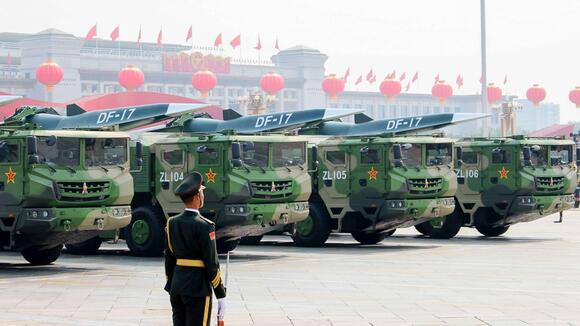 Reports that China may have tested a new hypersonic weapon have grabbed the world's attention and divided national security experts about its strategic significance and whether the U.S. was falling behind in a new arms race.

But it also raised basic questions about the new technology, what it all means, and what it is that China may have tested.

"The U.S. does not currently have the ability to even track this weapon, much less defeat it," said Steve Ganyard, a retired Marine colonel and ABC News contributor.

On Monday, China's foreign ministry denied a Financial Times report that it had tested a nuclear-capable hypersonic missile and instead claimed that it had conducted a "routine test" of a reusable space vehicle.

The newspaper cited five American officials who said China had launched a long-range rocket that deployed a hypersonic glide vehicle that circled the earth in a low orbit before returning to a target area in China, missing it by two dozen miles. ABC News has not independently confirmed the report.

The development raised the possibility of a new arms race for a concept and technology that few people have even heard of.

The idea is that gliders fitted atop ballistic missiles use the rocket's force to achieve hypersonic speeds, more than five times the speed of sound, as they glide and maneuver through the atmosphere for longer distances than ballistic missiles.

It is believed that because the gliders travel at lower altitudes than a warhead launched from an ICBM, current early warning systems would have a hard time tracking them as they head toward their targets.

They are also hard to track because the glide vehicles are maneuverable in the atmosphere, unlike ballistic warheads that follow a fixed trajectory, meaning they could weave their way around ground-based interceptor missile systems.

The U.S. has been developing its own hypersonic weapons programs, but both Russia and China have claimed technological advances that they say have made their programs already operational.

But China's test launch would be a significant step forward because a glider was placed into a low earth orbit and then reentered the atmosphere as it headed towards a target at hypersonic speed.

"What China tested was an orbital bombardment system," said Jeffrey Lewis, with the James Martin Center for Nonproliferation Studies. "The glider entered orbit and had to be brought back down with a de-orbit burn. It's not clear how much gliding it actually did."

Either way, the possibility of a new Chinese glider capability from space is raising concerns, particularly if it is capable of carrying a nuclear warhead and able to evade current missile defense systems.

"It will give the Chinese the ability to conduct a nuclear strike anywhere in the world without warning," said Ganyard.

Taylor Fravel, the Director of the Security Studies Program at the Massachusetts Institute of Technology, acknowledges that the new Chinese capability "does expose the limits of the U.S. missile defense system" designed to counter ballistic missiles from North Korea and Iran," but he does not see a new Chinese glide vehicle as destabilizing.

"Given the continued large gap in warhead stockpiles, whereby China possess only a fraction of those of the U.S. this particular test should not upset the U.S.-China nuclear balance or be destabilizing in that way," he told ABC News.

"However, it underscores China’s determination to strengthen its deterrent, especially as amid the steep decline in U.S.-China relations and long-standing concerns about missile defense," he added.

A nuclear military power since the 1960s, China is believed to maintain a small stockpile of at least 250 nuclear warheads, as well as a modest launch capability housed in dozens of missile silos.

Meanwhile, the United States has declared a stockpile of 3,750 warheads capable of being deployed by hundreds of land-based and sea-launched missiles and a strategic bomber fleet.

But recent open-sourced satellite images indicate that China is constructing more than 200 additional missile silos, an indication that it may be expanding its nuclear weapons capability.

In an interview with Stars and Stripes Adm. Charles Richard, the head of U.S. Strategic Command, declined to confirm the details of the Financial Times report but said “It almost seems like we can’t go through a month without some new revelation coming about China.”

“I am not surprised at reports like this. I won’t be surprised when another report comes next month,” he said, adding, the “breathtaking expansion of strategic and nuclear capabilities” means “China can now execute any possible nuclear employment strategy."

‘Something will happen, I presume’ — Trump appears to predict Chinese action against Taiwan after Olympics

Former president Donald Trump appears to be predicting that China will take aggressive action against Taiwan at the close of the 2022 Winter Olympics because he is no longer in the White House.Mr Trump made the cryptic comments during an interview on GB News with host Nigel Farage.Asked about America’s place in the world under President Joe Biden, Mr Trump claimed that the US is at “the lowest point it's ever been at” because he is no longer president. “I don't think it's ever been in a position like this — we're not respected anymore,” Mr Trump said.The twice-impeached...
SPORTS・4 DAYS AGO
Newsweek

The second-ranking general in the US military has sounded the alarm about China’s weapons development — warning that Beijing may soon have the capability to launch a surprise nuclear strike against America. “They look like a first-use weapon,” Gen. John Hyten, the vice chairman of the Joint Chiefs of Staff,...
MILITARY・19 DAYS AGO
The Independent

United States’ satellites are constantly under attack, and China may become the dominant space power by the end of the decade, according to a Space Force general.“The threats are really growing and expanding every single day. And it’s really an evolution of activity that’s been happening for a long time,” General David Thompson, the Space Force’s first vice chief of space operations, told the Washington Post.“We’re really at a point now where there’s a whole host of ways that our space systems can be threatened.”The United States must deal with “reversible attacks” on satellites – those which do not...
MILITARY・3 DAYS AGO

Russia has billed the Checkmate as a light fighter, but that isn't really the case. Some four months since it was officially unveiled, another glut of promotional material has been released relating to the Sukhoi Checkmate ahead of its official foreign debut at the Dubai Airshow next week. Also known as the Light Tactical Aircraft, or LTS in Russian, what we've seen now reveals a fighter that’s substantially bigger than we might have imagined, at least in comparison to the Su-57 Felon. Seeing the two planes alongside each other provides our best view so far of the enigmatic Checkmate fighter project and evidence that this is really more of a medium fighter than a true light combat jet.
AEROSPACE & DEFENSE・23 DAYS AGO
Fudzilla

While Biden’s military focuses on naming U.S navy ships after a gay rights leader and christened it by a transgender veteran, China’s military has built mockups in the shape of a U.S. aircraft carriers and other U.S. warships. For the last few months there has been a lot of concern about China attacking Taiwan, but are they also plotting an attack on the US? Lars talks about some disturbing new information that could mean just that, with Dr. Weifeng Zhong who is a Senior Research Fellow at the Mercatus Center at George Mason University.
FOREIGN POLICY・26 DAYS AGO
hngn.com

The Peoples Republic of China increases Chinese hypersonic missiles to deter the US and its allies in the Indo-Pacific. As these deterrents go, these weapons could turn the tide in Beijing's favor. But the mainland government said they would not use nukes first and wanted assurance from Washington if they...
MILITARY・8 DAYS AGO

Taiwan's president unveiled the country's combat wing of advanced US-made F-16 fighters in a ceremony on Thursday, showing its new Air Force capabilities against mainland China. The event, held at an air base in the southern Taiwanese city of Chiayi, saw the island commission the first combat wing of F-16...
AEROSPACE & DEFENSE・18 DAYS AGO
The Independent

Donald Trump predicts "something will happen" between Taiwan and China after the 2022 Beijing Winter Olympics while saying America is at "the lowest it has ever been". Speaking to Nigel Farage on GB News, the former president said: "There were no planes flying over Taiwan, you didn't talk about Taiwan when I was president.
SPORTS・4 DAYS AGO
Business Insider

The US Navy recently conducted joint exercises with allies and partners in the Pacific. The 7th Fleet commander said it was "an incredible amount of power" but added that more was needed for deterrence. "Four aircraft carriers is a good number, but six, seven or eight would be better," he...
MILITARY・3 DAYS AGO
Reuters

MELBOURNE, Nov 13 (Reuters) - It would be "inconceivable" for Australia not to join the United States should Washington take action to defend Taiwan, Australian Defence Minister Peter Dutton said on Saturday. On Wednesday, U.S. Secretary of State Anthony Blinken said the United States and its allies would take unspecified...
POLITICS・23 DAYS AGO

The US has been reportedly testing the Israeli-made Iron Dome air defense system on the Pacific island of Guam, which hosts the closest American military bases to China. The ongoing tests in Guam are scheduled to continue until December, the Wall Street Journal has reported, without expanding on how successful they've been.
AEROSPACE & DEFENSE・26 DAYS AGO
Foreign Policy

The Biden administration added more U.S. troops to Taiwan over the past few months, according to newly published Defense Department data, leaving nearly 40 troops on the embattled island to protect the de facto U.S. embassy and train Taiwanese troops. The small but steadily growing U.S. footprint—now nearly twice as...
MILITARY・17 DAYS AGO
hngn.com

Western nations are worried that Iran could be allied to China and Russia and ignore them on the nuclear table if Tehran pulls away, it is a problem for NATO and the US. If such a triumvirate is formed with the Middle East, Far-Eastern Asia, and Eastern Europe, which Iran, China, and Russia do form a power bloc, it would be a worst-case scenario to play out. Tehran is another nuclear power in the making and has significant armed forces.
POLITICS・3 DAYS AGO
Reuters

TEGUCIGALPA, Dec 2 (Reuters) - The government of incoming Honduran president Xiomara Castro does not plan to establish diplomatic ties with China as it prioritizes U.S. relations, a high-ranking ally of Castro said on Thursday, signaling a reversal of her pre-election stance. Before Sunday's presidential election, which Castro appears to...
FOREIGN POLICY・3 DAYS AGO
thedrive

U.S. warns it has ‘tools’ to deal with Iran if nuclear talks fail

The United States is “making decisions” and preparing “for a world in which there is no return” to the Iran nuclear deal, a senior State Department official said over the weekend, following last week’s disappointing negotiations over resuming the 2015 accord. “We’ve been waiting patiently for five and a half...
U.S. POLITICS・1 DAY AGO
Newsweek