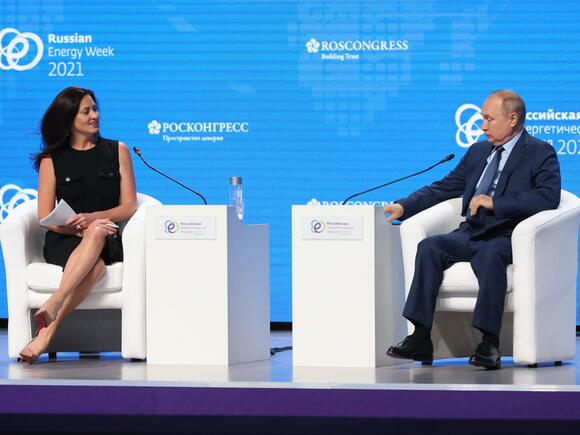 Russian state media is claiming that the reporter whom President Vladimir Putin said was too 'beautiful' to understand him during an interview last week was part of a US "special operation" to make him look bad, the Daily Beast first reported .

Journalists, figures, and personalities across the Russian media sphere have denounced American CNBC journalist Hadley Gamble, targeting her with misogynist digs and accusations of being part of a government plot.

Olga Skabeeva, a host of a state TV show, said Gamble was part of a US "special operation" to target Putin, according to a translation by the Daily Beast.

Mikhail Markelov, a journalist and former politician, agreed with Skabeeva and reportedly described Gamble as a "secret weapon."

Other commentators criticized the interview and made misogynistic claims about Gamble's appearance or attire.

The Daily Beast reported that radio host Vladimir Soloviev referred to Gamble as "that American broad from the Middle East" and claimed she was trying to distract Putin with her "sex appeal."

Gamble spoke to Putin at the Russian Energy Week in Moscow on Wednesday and addressed recent accusations that Russia was withholding gas supplies to Europe in an effort to drive up prices.

Seemingly irritated, Putin turned to the audience and said in Russian: "Beautiful woman, pretty, I'm telling her one thing. She instantly tells me the opposite as if she didn't hear what I said," The Hill reported.

Gamble later posted a photograph to Instagram of the front page of Russian newspaper Kommersant that showed her leg during her interview with Putin.

Too beautiful to understand him on a gas issue? Oh she understands alright, that's how he deals with women he knows he has no chance of 🔩! And the gas issue is called " being full of hot air!" 💨

Putin is right, no doubt. At least the guy is with it, brain dead Biden would have been stuttering while trying to read the teleprompter 🤣🤣🤣

he put her in her place when she came aggressively at him and wasn't listening to what he was saying. 🥴 I'm finding it funny, honestly.

MOSCOW (Reuters) - Russia’s ambassador to the United States said that 27 more Russian diplomats and their families were expelled from the United States and would leave on Jan. 30. “Our diplomats are being expelled...A large group of my comrades, 27 people with families, will leave us on January 30......
FOREIGN POLICY・5 HOURS AGO
Newsweek

NATO has asked Russia to "reduce tensions and de-escalate" as Kyiv increases its calls to join the U.S-led alliance to counter the threat from Moscow.
MILITARY・23 HOURS AGO
Business Insider

The buildup of Russian troops on Ukraine's border has prompted fears of an invasion. Former US diplomats and officials say there's a significant risk of a Russian incursion, given Putin's history. "One way or another, he wants Ukraine neutralized," Fiona Hill, a top Russia expert, told Insider. For the second...
POLITICS・1 DAY AGO
Reuters

The German government has urged members of Congress not to sanction the Nord Stream 2 pipeline, arguing that doing so will "weaken" U.S. credibility and "ultimately damage transatlantic unity," according to documents obtained by Axios. Why it matters: At a time when roughly 100,000 Russian troops are massing at its...
U.S. POLITICS・4 HOURS AGO
CNN

(CNN) Ukrainian President Volodymyr Zelensky says a group of Ukrainians and Russians is planning to carry out a coup against him next week. Speaking at a news conference in Kiev on Friday, the President said he had received intelligence information, which included audio, indicating the coup is planned for December 1 or 2.
POLITICS・1 DAY AGO
Reuters

MOSCOW, Nov 27 (Reuters) - Russia has no plans to invade Ukraine and suggestions to the contrary are malicious U.S. propaganda, Moscow's foreign intelligence chief said on Saturday. U.S., NATO and Ukrainian officials have raised the alarm in recent weeks over what they say are unusual Russian troop movements near...
POLITICS・1 DAY AGO
Los Angeles Times

The biggest foreign policy challenge for President Biden is coming not from Asia, but from a more traditional nemesis, Russia's Vladimir Putin.
LOS ANGELES, CA・5 HOURS AGO

U.S. says 'all options' on the table over Russian troop buildup near Ukraine

WASHINGTON, Nov 26 (Reuters) - All options are on the table in how to respond to Russia's "large and unusual" troop buildup near Ukraine's border, and the NATO alliance will decide on the next move following consultations next week, the State Department's top U.S. diplomat for European affairs said on Friday.
MILITARY・1 DAY AGO
Washington Post

What you need to know about tensions between Ukraine and Russia

The fault lines between Ukraine and Russia run deep. Western and Ukrainian officials have raised alarms about a Russian military buildup near Ukraine, where Russian-backed separatists have been fighting Ukraine’s Western-allied forces since 2014. The Russian moves have brought concern over the possibility of the conflict escalating or even a Russian invasion of Ukraine — accusations that Moscow rejects.
POLITICS・1 DAY AGO
San Diego Union-Tribune

Russian President Vladimir Putin has hosted the leaders of Armenia and Azerbaijan for talks, which he called "constructive."
POLITICS・1 DAY AGO
Los Angeles Times

T-84U: The Tank Ukraine Would Use in a War With Russia

The Ukrainian T-84U Main Battle Tank Does Not Have the Numbers: Russia may have as many as 1,000 tanks, armored personnel carriers, and self-propelled howitzers along the border with Ukraine, according to recent satellite imagery released this month. And that’s just the force located north of Ukraine. About 90,000 Russian troops are on the border too.
MILITARY・2 DAYS AGO
New York Post

Mud could help decide timing of any Russia move against Ukraine

Muddy terrain and the need for more troops on the ground make any large-scale Russian invasion of Ukraine unlikely until January at the earliest, military analysts in Moscow and the West say, creating a window of diplomacy to steer President Vladimir Putin away from a war. Those judgments come as...
POLITICS・2 DAYS AGO
Fox News

NATO Secretary-General Jens Stoltenberg warned Russia Friday that any attempt to invade Ukraine would have costs, as concern mounts about a Russian military buildup near its former Soviet neighbor’s borders. Ukraine says Moscow kept about 90,000 troops near their common border following massive war games in western Russia earlier this...
MILITARY・1 DAY AGO
AFP

Ukraine's President Volodymyr Zelensky said Friday that Russia was sending "very dangerous" signals with troop movements on the border, warning that his military was ready to push back any offensive.  Zelensky said Ukraine was ready to take on Russia if Moscow decides to move troops across the border.
POLITICS・1 DAY AGO
hngn.com

The US practiced attack drills with ten nuclear bombers driving tensions in Eastern Europe sky-high. This the Kremlin called a dire threat against Russia that will have a proper response to match it. Moscow was not pleased with the mock nuclear attack that was only 20-kilometers from its air defense...
MILITARY・3 DAYS AGO
Fox News

The director of Ukraine’s defense agency anticipates Russian forces now amassed with hundreds of heavy fighting vehicles parked near the Russia-Ukraine border will attack by the end of January or early February 2022, according to the Military Times. The only question is when and that decision comes down to the...
POLITICS・2 DAYS AGO
Business Insider

William J. Burns confronted the heads of Russia's security and intelligence agencies in Moscow but did not blame Russia, The Washington Post reported.
U.S. POLITICS・3 DAYS AGO