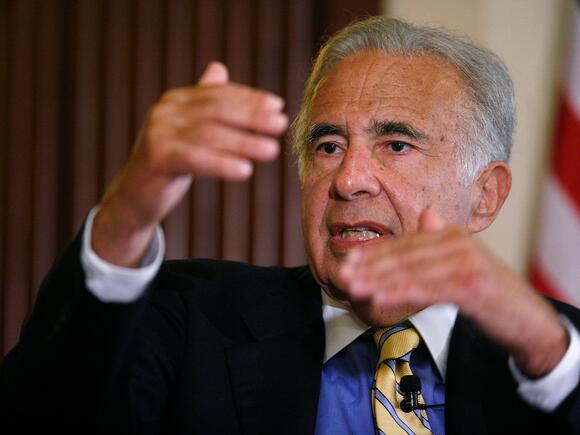 Carl Icahn trumpeted activist investing, sounded the alarm on federal spending, and explained why he doesn't own bitcoin in a CNBC interview this week.

The billionaire boss of Icahn Enterprises also advised against making market predictions, warned of a looming inflationary crisis, and reacted to Insider's recent report that he left more than $40 billion on the table by selling Apple and Netflix stock.

Here are Icahn's 7 best quotes from the interview, lightly edited and condensed for clarity:

1. "I've made it almost the cardinal rule to not try to predict the market over the short or medium term, and it's served me well. I made the mistake of straying from that rule in 2020, and paid the price for it."

3. "Inflation is taking hold in a bad way. We need more productivity in this country, and the only way we're gonna get productivity is to get the right guys to run these companies. Their crown jewels should be burnished. They should be spun off and taken out." - calling for executives to carve out the best parts of their businesses, and giving the example of eBay spinning off PayPal.

5. "The jury is really out on whether bitcoin has intrinsic value or acts as a store of value. If inflation gets rampant, I guess it does have value. There are so many variables, it is a very difficult thing to invest in."

6. "There was an article saying I could be worth $40 billion more if I had kept Apple and Netflix. I don't really care because I never would have kept them. When something really needs to be done, we try to get it done, and then we get out. We're always gonna sell too soon." - referring to a recent Insider report .

7. "We made a great deal of money doing this paradigm. When I stray from it, I'm gambling. If I'm going to gamble, I might as well go to Vegas, right? So I'm not going to, I learned that discipline. - Icahn said that investing in bitcoin would be a gamble for him .

Read more: Warren Buffett expert Robert Hagstrom breaks down the 3 key elements of the investor's 'ultimate money mind' - and explains why he won't rush to make another elephant-sized acquisition

Brookfield Renewable should have the power to continue producing market-beating total returns. Crown Castle's connection to the data infrastructure megatrend positions it for continued growth. NextEra Energy's leadership in renewables bodes well for its future, especially as it adds new power sources. Thanks to the wonders of compound interest, it...
STOCKS・14 HOURS AGO
The Motley Fool

PayPal stock is down over 40% from its high. Fiverr International will benefit from long-term trends, and its stock sell-off is overdone. Twitter still has underappreciated avenues to growth. Many growth-dependent stocks have seen significant pullbacks in a recent bout of market volatility. Tech stocks have been volatile across 2021's...
STOCKS・17 HOURS AGO
MarketWatch

Interest rate markets may have biggest impact on bitcoin in near term, this asset manager says

Although the narrative that bitcoin could be used as an inflation hedge has contributed to the cryptocurrency’s earlier bull run, bitcoin has recently started to demonstrate some sensitivity to interest rates, a crypto asset manager said.
MARKETS・12 HOURS AGO
Benzinga

The address holding about 28% of Dogecoin's (CRYPTO: DOGE) total supply most probably belongs to Robinhood, not Elon Musk as some previously speculated. What Happened: A recent investigation led by the Dogecoin community linked the wallet behind Robinhood's 420.69 DOGE wallet test transaction to the famous Dogecoin whale wallet currently holding 4.1 billion DOGE — equivalent to about $892 million — but previously held as much as 36.7 billion DOGE.
MARKETS・14 HOURS AGO

As bitcoin enters a bear market, these are the 5 best performing cryptocurrencies over the past week

While bitcoin and ether dominate the headlines, there are more than 14,000 other crypto coins. With less liquidity and more volatility, these alternative cryptocurrencies can deliver investors massive losses or gains in a short period of time. These are the five best performing cryptocurrencies over the past week, according to...
STOCKS・1 DAY AGO
Benzinga

Crypto trader Michaël Van de Poppe says even though Bitcoin (CRYPTO: BTC) is experiencing a price drop, he does not believe the crypto market is entering a bear market, and anticipates a lengthening post-halving cycle. What Happened: During a recent strategy session, Van de Poppe told his 148,000 Youtube subscribers...
MARKETS・7 HOURS AGO
The Motley Fool

These 3 Stocks Punished the Dow Friday

Markets fell sharply on Friday. Three Dow stocks in particular were responsible for a big portion of the overall decline. It's best not to shift from your long-term investing strategy. The stock market was definitely not in a holiday mood on the day after Thanksgiving, as news of the new...
STOCKS・1 DAY AGO
Markets Insider

In a crypto crash, the coins with the best real use cases and loyal followings will survive the best, according to FTX's Sam Bankman-Fried

In a bear market, look for cryptos with big real use cases and a loyal fan base, Sam Bankman-Fried said. "Hype-driven" coins tend to crash the hardest, he told Kitco News. The FTX founder said institutional adoption will create a "big set of inflows" in years to come. Sign up...
BUSINESS・19 HOURS AGO

Mexican billionaire Ricardo Salinas Pliego has advised investors to put their money into bitcoin. Salinas who is the third richest man in Mexico advised this due to the rate at which the Fed is printing dollars. Inflation rates have soared in the past year and are expected to continue doing so. The billionaire advises putting money into bitcoin to combat the rate at which fiat money is being issued.
STOCKS・1 DAY AGO
Markets Insider

Concerns of a new COVID-19 variant sent Wall Street's fear gauge soaring as much as 51% on Friday. The volatility surge could signal an end to the low volatility regime of 2021, according to Fairlead Strategies. This is the level the VIX needs to close above to signal a "difficult...
STOCKS・1 DAY AGO
Markets Insider

The SkyBridge Capital boss said the Federal Reserve is now less likely to tighten aggressively, making this plunge in stocks a buying opportunity.
STOCKS・1 DAY AGO
The Motley Fool

This morning, equity markets and crypto markets are currently under intense pressure. Risk assets as a whole are reacting negatively to concerns that a new coronavirus variant found in South Africa could be the worst one yet. These concerns have bled into many of the best-performing cryptocurrencies of late. In...
STOCKS・1 DAY AGO

Friday's shortened trading session was dominated by the news of a new coronavirus variant and its impact on investors.
STOCKS・1 DAY AGO
The Motley Fool

Amwell's Converge system could pave the way for significant gains in the telehealth sector. Alibaba has a diverse business that will benefit from improving U.S.-China relations. Are you looking for an underrated stock that could make for a good contrarian bet in the next year? Two stocks you should consider...
STOCKS・2 DAYS AGO
Markets Insider

Billionaire investor Mike Novogratz has said Fed Chair Jerome Powell could be about to slow down the crypto market now he's been nominated for a second term. Novogratz told CNBC on Wednesday the "macro story has changed a little bit" and that "people are getting pretty bearish" on cryptocurrencies. "Powell...
STOCKS・2 DAYS AGO
New York Post

Tesla CEO Elon Musk disclosed Tuesday that he sold another 934,091 shares of the electric vehicle maker, worth some $1.05 billion, bringing his total selling spree this month to nearly $10 billion worth of Tesla stock. Musk — the wealthiest man in the world, worth some $300 billion — made...
STOCKS・3 DAYS AGO
The Independent

Ethereum is a better bet than bitcoin, JPMorgan says

Ethereum could be a better bet for investors than bitcoin, according to US banking giant JPMorgan Chase.The world’s second most valuable cryptocurrency has risen in price by more than 500 per cent in 2021, compared to a 96 per cent rise for BTC, and now has a market cap roughly half that of bitcoin’s.Follow our live coverage of the crypto marketOne of the reasons for investors to place their faith in Ethereum (ether) over bitcoin is the utility that its underlying technology offers, a recent research note from JPMorgan claimed.It has already played a leading role in the emerging industry...
STOCKS・3 DAYS AGO
Markets Insider

Feuding CEOs aside, JPMorgan's analysts are highly bearish on Tesla. They see the stock falling 77% over the next year.

Disagreements between Tesla and JPMorgan have sprung out into the open over the last two weeks. But feuding CEOs aside, JPMorgan's analysts have long been some of the most pessimistic voices on Tesla stock. The Wall Street titan's research unit thinks Tesla shares should be 77% lower in 12 months'...
STOCKS・3 DAYS AGO
Markets Insider

Elon Musk has now sold around 9.2 million shares in Tesla since asking his Twitter followers whether he should offload 10% of his holding in the EV company. That means the Tesla chief executive is now more than halfway towards the target, which he vowed to honor. Musk owned over...
STOCKS・3 DAYS AGO
Markets Insider

Dogecoin has "inflationary dynamics" and the meme coin isn't good for the broader crypto market, said Ripple CEO Brad Garlinghouse. At an event moderated by CNBC, he added that he'd be reluctant to hold dogecoin. He said inflation, which is at 31-year highs, has been a tailwind for the crypto...
BUSINESS・3 DAYS AGO