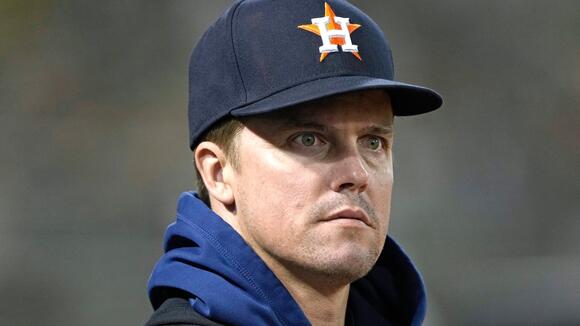 BOSTON (CBS) — The pitching situation for Dusty Baker and the Houston Astros has gone from bad to worse in an instant.

As such, Baker is calling upon Zack Greinke to start Tuesday night’s Game 4 at Fenway Park. And it feels like more of a Hail Mary than anything else.

Greinke has a Cy Young Award, two ERA titles, and six All-Star appearances to his name, but he has not been that pitcher at all since returning from the COVID list in mid-September. Though Greinke said he only suffered symptoms for a day, he was not the same pitcher in his final three appearances of the season as he was for most of the year.

In his final two starts, Greinke allowed 13 runs — 12 earned — off 10 hits and four walks, surrendering four home runs to the Rangers and Diamondbacks. He didn’t pitch for two weeks after that, spending time on the IL with neck soreness. He finally made a relief appearance on the final day of the regular season; he allowed two runs off two hits — one of which being a home run — in 2.1 innings.

Greinke did pitch a scoreless inning in the ALDS, though he did allow two inherited runners to score, turning a 6-6 tie into an 8-6 deficit. The Astros went on to lose, 12-6.

Greinke’s recent history with Boston isn’t encouraging for Houston, either. He started at Fenway Park on June 10, and he lasted just three innings. He allowed four runs — all earned — on seven hits and a walk, striking out two batters and serving up a homer to J.D. Martinez.

Going back to late August, Greinke allowed seven home runs in his final five appearances of the season.

Considering the historic rate at which the Red Sox are hitting home runs this postseason, it seems like a frightening recipe for the Astros to mess with.

Yet after burning through so many arms, Baker doesn’t have many options.

“What it does, your bullpen is taxed. That’s what it does,” Baker said of the short starts through three games. “You’re asking everybody to do probably a lot more than you would ever ask them to do, multiple innings, back-to-back days. You know, we need some zeros out there for an extended period of time, and hopefully we’ll get that tomorrow.”

If or when Greinke can’t get any more outs, the Astros have Cristian Javier ready in relief. Javier was a starter early in the season, but was moved to the bullpen in late May. From July through the end of the season, he pitched three innings exactly once, averaging 1.2 innings and 32 pitches per outing. He’ll likely be physically able to do more in Game 4, provided he can retire some hitters.

He had two very different experiences with the Red Sox lineup this season. On June 3, he allowed two runs off three hits and three walks while striking out six batters in his three innings of work. Six days later, he pitched four scoreless innings of relief, allowing just a single hit while striking out three.

Whether Javier enters a close game or another one where the Astros are behind big early is entirely up to Greinke.

“It’s big. I mean, it’s an important part,” Greinke said prior to Game 3 of his opportunity in Game 4. “Great group of guys here. Some of the best guys that I’ve been around, and it’s an important game, so I’ll do what I can. Hopefully help us out.”

In Game 4, the Red Sox will start Nick Pivetta, who had an up-and-down season but has been steady in the playoffs, allowing three runs in his 8.2 innings in relief. That included four scoreless innings in the Game 3 walkoff win over the Rays in the ALDS. And with Eduardo Rodriguez giving Boston six strong innings last night, and with the big lead allowing Alex Cora to give his top relievers an extra night of rest, the Red Sox will be going at the Astros with all they have on Tuesday night.

The soon-to-be-38-year-old Greinke obviously has the resume, but does he have the stuff? The answer to that question will go a long way toward deciding Game 4 and, really, the series.

A former Boston Red Sox player who helped the team win a World Series title in 2007 has died. According to ESPN Deportes and Dominican newspaper Diario Libre, former shortstop Julio Lugo died of an apparent heart attack on Monday. Lugo's sister, Rina Lugo, told the sports outlet that her...
MLB・20 DAYS AGO
NESN

The New York Yankees seemingly have been tied to each free agent this offseason, but reportedly got one of their guys Monday. The Yankees signed former Boston Red Sox shortstop José Peraza to a minor league deal, according to Dan Martin of the New York Post. Peraza has bounced around...
MLB・6 DAYS AGO
NBC Sports

The courtship of Kyle Schwarber continues in earnest. Schwarber recently declined his mutual option with the Boston Red Sox to become an unrestricted free agent, and several teams reportedly are interested in the veteran slugger. That includes the Red Sox, who remain "engaged" with Schwarber in contract discussions, per Chief Baseball Officer Chaim Bloom.
MLB・17 DAYS AGO
NJ.com

Houston, we have a problem. The New York Yankees watched the Astros swoop in Wednesday and sign free-agent right-hander Justin Verlander to a one-year, $25 million contract. That’s good money for a 38-year-old coming off Tommy John surgery. The Yankees were among a handful of teams linked to the two-time...
MLB・17 DAYS AGO

The Boston Red Sox continued to add to their organizational depth, signing former Detroit first-round pick Christin Stewart to a minor-league deal with an invitation to big-league camp.
MLB・5 DAYS AGO
dodgerblue.com

The Los Angeles Dodgers had Will Smith, Max Muncy, Justin Turner, Corey Seager, Trea Turner, Mookie Betts, Walker Buehler, Max Scherzer, Julio Urias and Kenley Jansen named among the nominees for the 2021 All-MLB Team. This is the third annual recognition for the top players, with winners being announced on...
MLB・25 DAYS AGO
Yardbarker

Red Sox right fielder Hunter Renfroe was unable to win his first career Gold Glove Award on Sunday night. Renfroe was named one of three finalists for the award among all American League right fielders late last month alongside Houston’s Kyle Tucker, but the honors on Sunday instead fell to Yankees outfielder Joey Gallo.
MLB・28 DAYS AGO
The Spun

Carlos Correa has made an official decision on his qualifying offer from the Houston Astros. Correa has declined the Astros’ $18.4 million qualifying offer, according to Jon Heyman. His days in Houston are over. The 27-year-old star is now the top free agent in baseball and is bound to receive...
MLB・20 DAYS AGO

When the MLB lockout concludes, the Boston Red Sox are going to have some work to do. It has been an interesting offseason for the organization. The Red Sox have lost Eduardo Rodriguez, added a few back-of-the-rotation arms, and re-acquired Jackie Bradley Jr. in a stunning trade on Wednesday night, losing star outfielder Hunter Renfroe in the process.
NFL・3 DAYS AGO
WCVB

BOSTON — A former Boston Red Sox outfielder known for his spectacular catches but perhaps less than stellar at bats is returning to Fenway Park, the team announced late Wednesday night. The Red Sox announced they had acquired outfielder Jackie Bradley Jr. along with minor league infielders Alex Binelas and...
MLB・4 DAYS AGO
NESN

The Boston Red Sox have some decisions to make. With the Major League Baseball offseason in full swing, the team obviously has to do its due diligence on free agents — and they seem to be doing so — but also take a look at the future of their current players under contract.
MLB・13 DAYS AGO
Boston Herald

When a 21-year-old Eduardo Rodriguez entered the 2014 season in the Baltimore Orioles farm system, Baseball America projected him as someone with a “No. 3 starter ceiling.”. If everything went perfectly in his development, he could be a mid-rotation pitcher. Rodriguez had a good minor league season in ’14, when...
MLB・15 DAYS AGO

The Red Sox have expressed interest in free agent reliever Jeurys Familia, according to WEEI’s Rob Bradford. Familia, 32, became a free agent earlier this month after wrapping up a three-year, $30 million deal with the Mets he originally signed in December 2018. First signed out of the Dominican Republic...
NFL・12 DAYS AGO
nbcboston.com

Why Haven't the Red Sox Signed Rafael Devers to an Extension Yet?

Tomase: What's John Henry's holdup with a Rafael Devers extension? originally appeared on NBC Sports Boston. If John Henry really wants to prove that he's willing to spend, he'll sign Rafael Devers to an extension, like, tomorrow. The arguments against bestowing $300 million contracts in free agency are sensible: You're...
MLB・12 DAYS AGO
MassLive.com

The Red Sox added three pitching prospects — Josh Winckowski, Brayan Bello and Kutter Crawford — to their 40-man roster Friday to protect them from the Rule 5 Draft. “All of whom have the ability to impact a major league club down the road and perhaps early on even for some of them in 2022 in a variety of different roles,” chief baseball officer Chaim Bloom said Monday. “They all have the upside to start games and they could all help us win games in other capacities if they end up not being starters.”
MLB・13 DAYS AGO
Click2Houston.com

According to both MLB Network and ESPN, Astros relief pitcher Kendall Graveman will be signing with the Chicago White Sox. The righthander had been acquired by the Astros near the trade deadline this past season as the team was looking to shore up its bullpen. For the regular season, combining both his stints with the Seattle Mariners and the Astros, Graveman finished 2021 with a 5-1 record and 10 saves with a 1.77 ERA in 53 games. In the postseason, he was 1-0 with a 1.64 ERA in nine games for the Astros.
MLB・12 DAYS AGO
MassLive.com

Boston Red Sox have made offer to Steven Matz, who will likely pick new team before Thanksgiving (reports)

The Red Sox are one of eight teams who have made a contract offer to free-agent starter Steven Matz, according to MLB Network’s Jon Heyman. Matz is likely to choose his new team before Thanksgiving, with multiple reports citing Wednesday as the lefty’s decision day. According to Heyman, the Blue...
MLB・12 DAYS AGO
MassLive.com

Are Boston Red Sox more willing to give up draft pick to sign free agent because they have 4 selections before third round in 2022?

The Boston Red Sox own four picks before the third round in the 2022 MLB Draft. They will draft 24th overall in the first round. They have two second round draft picks, including the 41st overall selection as compensation for not signing 2021 second-round pick Jud Fabian. Boston also received...
SPORTS・13 DAYS AGO
Yardbarker

The Red Sox appear open to a reunion with free agent left-hander Rich Hill, according to The Boston Globe’s Alex Speier. In a recent conversation with Speier, Hill “suggested that he’s been in touch with members of the Red Sox this offseason, just as he was as a free agent last offseason.”
MLB・10 DAYS AGO
FanSided

Red Sox news includes a possible free agent and a lost free agent. Red Sox connections are in the news around the baseball world. One that has surfaced is the perpetual need for Boston, a right-hand slugger; this one is half a world away. His team, the Hiroshima Carp, is...
MLB・9 DAYS AGO