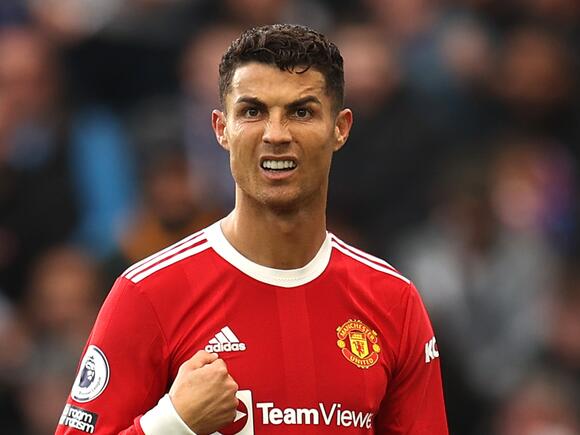 Ole Gunnar Solskjaer has defended Cristiano Ronaldo’s tactical role, insisting that he is doing everything he can despite lack of pressing as part of Manchester United ’s attack.

United were roundly criticised for their failure to shut down Leicester City during Saturday’s 4-2 defeat at the King Power Stadium.

Brendan Rodgers’ side played through the lines easily, with the Leicester manager later admitting that a lack of pressing through the centre of United’s team made it easier for them to create scoring chances.

Ronaldo has pressed opponents fewer times than any other Premier League player in his position and was among the least active forwards in European football for pressing last season.

The 36-year-old’s reluctance to press has been identified by some as a problem for United but Solskjaer suggested that Ronaldo has different tactical duties to his team-mates.

“We’ve got 11 players on the pitch with different roles and responsibilities,” he said. “We put a team out there that we think is going to win that game, we didn’t win against Leicester so there’s always going to be criticism.

“Cristiano is an absolute top player and we know what he can do for us and he’s doing everything he can do to help the team.”

Solskjaer described United’s fourth defeat in seven games as an “eye-opener” and is hoping for a response against Atalanta at Old Trafford on Wednesday night, with his side having already lost once in their Champions League group stage campaign.

“You look at yourself, what can I do to help the team. I've seen a reaction from the players, conceding four goals is a big eye-opener for us that we need to improve on different levels and loads of details.”

Manchester United boss Ole Gunnar Solskjaer has backed Harry Maguire to prove his critics wrong and insisted he has no plans to take the captaincy away from the defender. Maguire came under fire from former United captain Roy Keane as well as Ian Wright during the international break for his goal celebration during England's 5-0 win over Albania last week.
PREMIER LEAGUE・7 DAYS AGO
The Guardian

Celtic’s hopes of progressing in the Europa League were dashed in agonising fashion as a late fightback from Bayer Leverkusen denied them a famous victory in Germany. Ange Postecoglou’s spirited side knew they would probably require a win to keep their last-32 dream alive and they were on course for this outcome until the closing stages after a Josip Juranovic penalty and a strike from Jota cancelled out Robert Andrich’s early goal for the hosts.
UEFA・2 DAYS AGO
The Independent

Bayern Munich’s annual general meeting ended in tumult with members yelling and booing the club’s directors for refusing to discuss its sponsorship arrangements with Qatar “We are Bayern! You are not!” irate fans chanted at club president Herbert Hainer chief executive Oliver Kahn and other presidium members late Thursday. “We are the fans that you don’t want!”Tempers frayed following club member Michael Ott’s unsuccessful attempt to lodge a motion calling for a vote on Bayern’s contentious sponsorship agreements with Qatar. Ott, and many other Bayern fans, contend that the partnership with Qatar Airways through 2023 is damaging the club’s...
SOCCER・1 DAY AGO

Regulator for English football given backing by government

The creation of an independent regulator for English football has been given initial backing by the government in a move intended to safeguard the future of clubs by providing financial oversight and assessing the suitability of potential owners
SAN DIEGO, CA・2 DAYS AGO
The Independent

Sheffield United are set to announce the departure of manager Slavisa Jokanovic after just six months in the role, the PA news agency understands.The Blades, relegated from the Premier League last season, sit 16th in the Sky Bet Championship table and Jokanovic’s exit is expected to be confirmed on Thursday.Jokanovic, 53, became the Blades’ first overseas manager in May when installed as Chris Wilder’s permanent replacement.The Serbian won promotion to the top flight with his previous English clubs Watford and Fulham, but has won only six of his 19 league games since taking over at Bramall Lane.The Blades won their...
PREMIER LEAGUE・2 DAYS AGO
The Independent

Premier League clubs should pay a transfer “stamp duty” to support the English pyramid, the fan-led review of football governance has recommended.The wide-ranging review commissioned by the government has, as expected, called for the creation of an Independent Regulator for English Football (IREF).It says this should be created via an Act of Parliament to ensure the financial sustainability of the men’s professional game.The review has also recommended the granting of “golden share” veto powers to supporters’ groups on key issues such as clubs attempting to enter breakaway competitions, moving stadium or changing club colours.However, arguably the most surprising and eye-catching...
UEFA・2 DAYS AGO
The Independent

West Ham waltzed into the last 16 of the Europa League with a game to spare after a 2-0 victory at Rapid Vienna.First-half goals from Andriy Yarmolenko and Mark Noble wrapped up top spot in Group H for David Moyes’ side.It was an important victory for the Hammers as they are now straight through to the knockout stage having avoided a play-off in February against a team dropping down from the Champions League.Moyes was even able to make eight changes to his side, resting the likes of Declan Rice and Michail Antonio, and still comfortably get the job done.With Vienna...
UEFA・2 DAYS AGO

Thomas Frank has urged his Brentford side to show “bravery” as they bid to get back on track at the Community Stadium against Everton on Sunday.The Bees have not won a home Premier League game since the opening day of the season against Arsenal and stopped the rot of four straight losses by salvaging a point at Newcastle last week.But Frank insists he is unconcerned by his side’s recent plight and believes they are in good shape to recover their momentum and turn their new home into a “fortress”.Frank said: “It is extremely important that we are brave. I...
PREMIER LEAGUE・1 DAY AGO
San Diego Union-Tribune

Ten-man Tottenham conceded a late goal and fell to a humbling 2-1 loss to lowly Slovenian team NS Mura in the Europa Conference League, a result that puts the London club in danger of being eliminated from the third-tier competition
PREMIER LEAGUE・2 DAYS AGO
The Independent

Imposing a transfer levy on Premier League clubs to further support the football pyramid risks “killing the golden goose”, according to Aston Villa chief executive Christian Purslow The fan-led review of football governance, among other recommendations, proposed a “stamp duty” of up to 10 per cent on deals between top-flight clubs or signings from overseas to help safeguard the financial stability of the lower divisions.The Premier League broadly welcomed the review and will examine all the proposals moving forward – but also issued a warning over any wide-sweeping reforms which ultimately damage the game’s standing.The PL welcomes the publication of...
PREMIER LEAGUE・2 DAYS AGO
The Independent

Antonio Conte said he is not a “magician” after the size of his task at Tottenham Hotspur was laid bare by Thursday night’s Europa Conference League embarrassment.Spurs, Champions League finalists two-and-a-half years ago, were beaten by Slovenian minnows NK Mura – the lowest ranked club in the third-tier European competition who were only formed in 2012 and had lost all four of their previous games.Here, we take a look at some of the tricks he has to pull off to turn Tottenham into a force.Can he get some players to produce a disappearing act in the January transfer window?Conte could...
PREMIER LEAGUE・1 DAY AGO

Clockwatch: There were wins for Arsenal, Liverpool and Aston Villa, while Norwich and Wolves play out scoreless draw at Carrow Road
PREMIER LEAGUE・5 HOURS AGO
The Independent

Everton manager Rafael Benitez admits he is dealing with a complicated situation surrounding Jean-Philippe Gbamin The Ivory Coast international has endured a terrible time since joining from Mainz in August 2019, missing virtually two years with consecutive thigh, Achilles and knee injuries.He has managed just 282 minutes of football and his Premier League comeback against Wolves earlier this month ended in ignominy when he was hauled off at half-time having looked well short of the level required.Since then he has only featured as an 89th-minute substitute in the goalless draw at home to Tottenham – a match in which Benitez...
PREMIER LEAGUE・13 HOURS AGO
The Independent

Eddie Howe will be in the Newcastle United dugout for the first time when they head for Arsenal on Saturday after recovering from his bout of Covid-19.The 43-year-old, who tested positive for coronavirus on the eve of his first game in charge against Brentford, returned a negative test on Friday morning.He will be allowed to resume his role as the Magpies’ new head coach with his symptoms having been traced back to earlier last week.Assistant Jason Tindall has revealed his long-time friend was unwell at the beginning of this week, but has improved significantly since.Tindall said: “You’re always worried when...
SOCCER・1 DAY AGO
San Diego Union-Tribune

Tottenham boss Antonio Conte is enjoying being back in the Premier League despite the situation he inherited at his new club.Conte laid bare just how big a job he has on his hands after Spurs’ European embarrassment in midweek, where they lost to Slovenian minnows NS Mura – the lowest ranked team in the Europa Conference League.Conte was forced to admit after the humiliation that the level of his squad is “for sure not so high” and that he has reservations over its limitations.The Italian chose to return to the Premier League four years after he was sacked at Chelsea...
PREMIER LEAGUE・13 HOURS AGO
The Independent

Eddie Howe might have finally been able to take charge of Newcastle from the touchline, but his forlorn stare did little to disguise the misery unfolding in front of him. Arsenal’s momentum was brought to a shuddering halt at Liverpool last week but, despite initially struggling to prise open Newcastle’s rigid defence, they eventually cruised to a comfortable 2-0 victory at the Emirates, as Bukayo Saka and Gabriel Martinelli scored second-half goals – even if an injury to the former will leave Mikel Arteta with cause for concern.It was hardly a disastrous display from Newcastle, who were resilient for a...
PREMIER LEAGUE・7 HOURS AGO
The Independent

Premier League chief executive Richard Masters says Newcastle’s owners can be removed should the Saudi state be found to control the club.Newcastle were taken over by a consortium led by Saudi Arabia’s Public Investment Fund – who the country’s Crown Prince is chairman of – last month.Masters said the Premier League had received “legally binding assurances” that the Saudi state would not control the club.“The issue is about control and we resolved the issue of control,” Masters told the BBC.“There are legally-binding assurances that the state will not be in control of the club.“If we find evidence to the contrary...
PREMIER LEAGUE・12 HOURS AGO