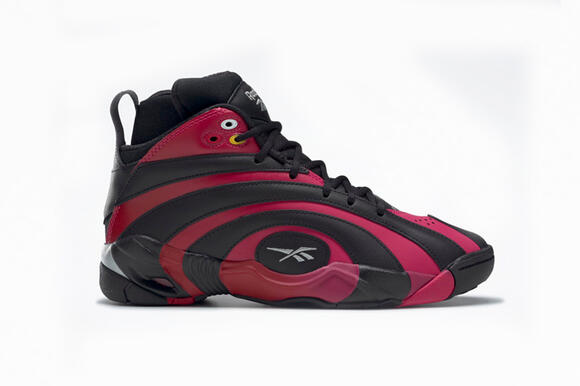 We heard the news about Shaq and Damian Lillard’s latest take on the old-school Shaqnosis basketball shoes back in August , but they were hard to get your hands (and feet) on. The shoes, which go for $150, were only available at Sneakers N Stuff . But starting today, the sneakers will be widely available for purchase, including on Reebok.com .

Featuring the hypnotizing concentric circle pattern that made the original model famous, the latest version is done in a black and red colorway to honor Lillard’s team, the Portland Trail Blazers, and is outfitted with both Lillard and Shaq detailing. In addition to the new color combination, the style now features Shaq and Lillard emblem on the heels as well as both Reebok and Adidas branding. (The double branding is an interesting move, because although Adidas has owned Reebok, Adidas just sold it to Authentic Brands Group . There’s a bit of speculation about whether that’s leftover from the official partnership or something that implies the shoes will continue as a collaboration.)

The Shaqnosis shoes launched during Shaq’s own on-court basketball career in 1996 and were initially rereleased in 2013. Over the years, there have been some other iterations of it, too, including one in pink and gray and one from last year’s spooky season done in black with a spiderweb design. The shoes are made with signature Hexalite hexagonal cushioning and a bouncy EVA midsole to boost comfort and support.

For all Reebok shoppers ready to nab a pair, head to the brand’s website now to shop.

Natalia Bryant showed off her modeling skills on her Instagram. The model and daughter of legendary NBA star Kobe Bryant posted to her social media a series of photos from her work with Beyonce’s line, Ivy Park. Bryant is serving as a model in the new line,  Halls of Ivy. In her posts, she wore a black and white houndstooth crop top and an oversized black and white suit. The pants featured a drawstring waist and a wide-leg style. She topped off her look with platform sneakers that popped out from the hem of her pants. Her gray and white shoes...
BEAUTY & FASHION・3 DAYS AGO
Footwear News

‘Congratulations, We Own Reebok’: Shaq and ABG’s Jamie Salter on the Deal That Landed Them FN’s Company of the Year Award

On Nov. 30, Authentic Brands Group will be honored as Company of the Year at the 35th annual FN Achievement Awards. Below is an article from the magazine’s Nov. 29 print issue about the company’s whirlwind year of acquisitions and investments. From snapping up Reebok to starting the IPO process, Authentic Brands Group generated nonstop buzz in 2021. The retail powerhouse, led by CEO Jamie Salter and president and CMO Nick Woodhouse, recently secured a pair of major new investors thanks to its talent in reviving struggling yet iconic brands like Juicy Couture, Lucky Brand, Forever 21, JCPenney, and Barneys...
BUSINESS・6 DAYS AGO
Footwear News

How Shaquille O’Neal Became the Second Largest Investor in the Company That Owns Reebok, JCPenney and Forever 21

Shaquille O’Neal may be most commonly known for his celebrated career as an NBA star. But the former athlete is also an avid businessman, working behind the scenes on some of the biggest retail deals of 2021. O’Neal is the second-largest individual shareholder of Authentic Brands Group, the company behind dozens of brand and retailer acquisitions, including Forever 21, Barneys New York, JCPenney and most recently, Reebok. The retail powerhouse, led by CEO Jamie Salter and president and CMO Nick Woodhouse, recently secured a pair of major new investors thanks to its talent in reviving struggling yet iconic brands. ABG was awarded...
NBA・3 DAYS AGO
firstsportz.com

Although fans might have witnessed great sportsmanship and friendship in the NBA over the course of its years to signify the positive side of NBA yet the other side is as ruthless as it can get. The latest to justify this claim, came in the Heat vs Timberwolves showdown as the home fans dug deep to spring up Jimmy Butler’s alleged past affair on national television during the on-going match.
NBA・11 DAYS AGO

The Golden State Warriors are in Phoenix to play the Suns on Tuesday night.
NBA・5 DAYS AGO
ClutchPoints

Chris Paul reveals when he knew Stephen Curry was different

San Francisco, CA – The Golden State Warriors and Phoenix Suns faced each other twice in the past week. Chris Paul and the Suns took the first game with Stephen Curry and the Warriors snagging the second. When looking at these two teams, you’re seeing two of the NBA’s best teams and two of the best point guards ever to play the game.
NBA・1 DAY AGO
Yardbarker

Bronny James looks very much like a product of his genetics in at least one aspect of his game. Los Angeles Lakers star LeBron James posted a video to Instagram over the weekend of his 17-year-old son Bronny throwing down an amazing dunk. As part of a dunk contest for Sierra Canyon’s annual Midnight Madness event, Bronny busted out an off-the-backboard windmill dunk and got his head above the rim. Have a look.
NBA・22 DAYS AGO
FastBreak on FanNation

Steph Curry had an unbelievable shot in the game between the Golden State Warriors and the Portland Trail Blazers.
NBA・9 DAYS AGO

Damian Lillard would only seek trade to 1 team?

Damian Lillard trade rumors are officially back like Schwarzenegger in “The Terminator.” That could prove to be good news for one team in particular. ESPN’s Stephen A. Smith said this week on “NBA Countdown” that the Portland Trail Blazers star, thought he would like to stay put, has the New York Knicks in mind as the one destination he would entertain a trade to.
NBA・1 DAY AGO
NBA Analysis Network

There still hasn’t been a Ben Simmons trade and the Philadelphia 76ers still have their focus on landing a superstar like Damian Lillard in a potential trade. While Lillard remains intent on leading the Portland Trail Blazers to success, there’s an intriguing hypothetical NBA trade scenario to ponder if those intentions were to change.
NBA・6 DAYS AGO
fadeawayworld.net

Klay Thompson Responds To JJ Redick Calling The Warriors' Schedule 'Soft': "Buddy, We Got The MVP, A Defensive Player Of The Year. That Kind Of Disrespect Bothers Me…”

The Golden State Warriors are having a sweet moment in the first month of the 2021/22 NBA season. The Dubs returned after two seasons down, struggling to even aspire to make the playoff. Even though they lost against the Charlotte Hornets on Sunday, they still boast the league-best record at...
NBA・19 DAYS AGO
ClutchPoints

San Francisco, CA – The Bay Area is full of culture, and that’s part of what makes the Golden State Warriors special. When the team signed Juan Toscano-Anderson, the Dubs added some of that culture to the organization. JTA was born and raised in Oakland, California, a place where not...
NBA・8 DAYS AGO

Kevin Durant and the Brooklyn Nets lost to the the Chicago Bulls on Saturday night.
NBA・19 HOURS AGO
ClutchPoints

It’s easy to forget in the midst of the Golden State Warriors’ phenomenal start that they’re still missing some key pieces. Klay Thompson is yet to suit up for the squad, as he continues to work his way towards a return from injury. Now, we have some intel on when he’s coming back and what’s taking him so long.
NBA・2 DAYS AGO
FanSided

Through just over a month, the 2021-22 season has been an absolute whirlwind for the Boston Celtics, as they can’t seem to find a way to stay consistent, be it with their rotations, win-loss record, or simply with their on-court production. Because of this, many have voiced their opinions on...
NBA・6 DAYS AGO
The Spun

The Portland Trail Blazers will be without their best player for an extended period of time. On Wednesday, the team announced that superstar point guard Damian Lillard will miss at least the next 10 days with lower abdominal tendinopathy, per NBA insider Sham Charania. Damian Lillard has been dealing with...
NBA・4 DAYS AGO
FastBreak on FanNation

Damian Lillard of the Portland Trail Blazers sent out a tweet about the Las Vegas Raiders on Sunday.
NBA・14 DAYS AGO
hotnewhiphop.com

Throughout his career in basketball, Steve Kerr has been around a lot of legends. Of course, Kerr got to play with Michael Jordan during the second-leg of the Chicago Bulls' three-peat from 1996-1998. Kerr won three NBA titles during that time and he got to play alongside the greatest player to ever grace the court.
NBA・9 DAYS AGO
ClutchPoints

The Portland Trail Blazers fired former general manager Neil Olshey after reports of the toxic workplace he oversaw emerged. Blazer star Damian Lillard spoke to reporters and reacted to the firing of Olshey. “I have a lot of thoughts, but ya know, in short, I always had a really good...
NBA・1 DAY AGO
Blazer's Edge

Damian Lillard might be the most versatile entrepreneur active in the NBA, not only scoring on the court but in music, business and supporting his community. From humble beginnings in Oakland, California and a relatively under-the-radar four years at Weber State University in Ogden, Utah, the 31-year-old is now one of the world’s biggest names in sports.
NBA・6 DAYS AGO