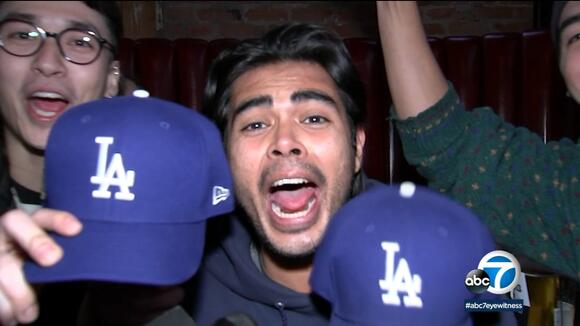 Cody Bellinger hit a tying, three-run homer and Mookie Betts then lined an RBI double as the Los Angeles Dodgers rallied in the eighth inning, beating Atlanta 6-5 Tuesday and cutting the Braves' lead in the NL Championship Series to 2-1. The Dodgers were down to their final five outs when Bellinger drove a two-strike pitch from Luke Jackson into the right-field pavilion, igniting the blue towel-waving crowd, some of whom had already left with LA trailing 5-2. Chris Taylor singled, stole second and moved to third on pinch-hitter Matt Beaty's groundout. Betts followed with a double off Jesse Chavez to right-center. With the cheering, chanting crowd on its feet in the ninth, Kenley Jansen struck out the side to earn the save, the ninth pitcher used by the Dodgers. They ran through a combined 15 in the first two games. Game 4 is Wednesday at Dodger Stadium, when left-handed pitcher Julio Urías is slated to start for the Dodgers. The Braves were planning a bullpen game. RELATED: Dodgers lose NLCS Game 2 after Atlanta RBI in 9th inning

Dodgers manager Dave Roberts discusses why Justin Turner was out of the lineup for Game 2 of the NLCS against the Atlanta Braves on Oct. 17, 2021.

After getting staggered with back-to-back walk-off losses in Atlanta, the Dodgers returned home, where they've dominated the Braves in recent years and were an MLB-best 58-23 during the regular season. The Braves haven't won at Dodger Stadium since June 8, 2018. It sure looked like they'd end that skid after leading 5-2 in the fifth. But the 106-win Dodgers staged another improbable comeback late, just like they've done so often this postseason. They beat St. Louis in the NL wild-card game, then edged 107-win San Francisco in Game 5 of the NL Division Series on Bellinger's tiebreaking single in the ninth inning. Last year, the Dodgers rallied from a 3-1 deficit to beat the Braves in the NLCS. The Braves built their lead with a bunch of singles, pounding out 12 hits. Freddie Freeman broke out of his slump, going 3 for 4 with a walk and a run scored after he struck out seven times in eight at-bats in the first two games.

Andrew Heaney had a terrible end to his LA Angels career, and it didn’t end there. After posting a 5.27 ERA with the Angels in 18 starts last year, he went to the Yankees and posted a 7.32 ERA over 12 games (five starts). It was a really awful year for Heaney, and it would appear that he’d have a tough time finding a new home for next year. Besides, he hasn’t had a sub-4 ERA since 2015.
MLB・28 DAYS AGO
Dodgers Nation

With the offseason upon us, we took to social media to ask fans something that is always a hot topic. Who would you bring back if you could bring one of your favorite former Dodgers? In this list, we featured Kiké Hernandez, Joc Pederson, Alex Verdugo, and Yasiel Puig. Thousands of fans chimed in with strong cases for each. We dive into some of the responses and give our pick.
MLB・29 DAYS AGO
The Spun

It could be the end of an era in Los Angeles. Major League Baseball teams have until 5 p.m. E.T. on Sunday to make qualifying offers to free agents. The qualifying offer – a one-year deal for 2022 worth $18.4 million – is only available for certain free agents. If a player passes on a qualifying offer and signs elsewhere, their old team receives a MLB Draft pick compensation.
NFL・29 DAYS AGO
Inside The Dodgers

Hall of Fame manager Joe Torre only spent three years at the helm with the Dodgers. In his first season, he was able to manage the team to their first NL Championship Series in 20 years. But apparently, a young lefty named Clayton Kershaw wasn't his biggest fan. Torre said in an interview this week ...
MLB・19 DAYS AGO

After coming up short in this year’s playoffs, the Los Angeles Dodgers could be going back to their fundamentals: acquiring another big name. Bob Nightengale of USA Today Sports reported this week that the Dodgers are interested in former Cy Young candidate Sonny Gray, having engaged in trade talks with the Cincinnati Reds. Fellow Reds starter Luis Castillo was also included in those discussions, Nightengale adds.
MLB・22 DAYS AGO
The Spun

The Los Angeles Dodgers could be gunning for a significant free-agent move this offseason. According to MLB Network insider Jon Heyman, multiple teams, including the Dodgers, are looking to “pry” superstar first baseman Freddie Freeman away from his World Series-winning Atlanta Braves squad. Yesterday, the Dodgers lost shortstop Corey Seager...
MLB・6 DAYS AGO
ClutchPoints

Newly-signed New York Mets pitcher Max Scherzer spent half of a season with the Los Angeles Dodgers after arriving there via trade at the deadline. Seen as a great fit at the time of the trade, it turns out that things weren’t actually so rosy between Scherzer and the Dodgers. In fact, Scherzer blames the Dodgers for his bad postseason experience.
MLB・5 DAYS AGO
Dodgers Nation

After seven years with the Dodgers, Corey Seager is trading Dodger blue for a whole lot of green. A big, Texas-sized pile of green. Seager agreed to a 10-year, $325 million deal with the Texas Rangers on Wednesday, leaving LA in his rearview mirror. In the wake of Seager’s signing...
MLB・6 DAYS AGO

After the Los Angeles Dodgers decided not to give Clayton Kershaw a qualifying offer, he’s now an unrestricted free agent. Who could sign Kershaw as a free agent?. With Clayton Kershaw officially entering into free agency, there’s a ton of interest around where the legendary pitcher could land. The Los Angeles Dodgers chose not to give their longtime star a qualifying offer and now Kershaw has the freedom to look around and find a new team if he so chooses.
MLB・21 DAYS AGO
FanSided

The Dodgers lost Corey Seager to a monster free-agent deal with the Rangers and one of the deciding factors as to why he left LA has come to light. On Monday, the Texas Rangers signed former Los Angeles Dodgers infielder Corey Seager to a massive 10-year/$325 million contract. The front office and fans alike are sort of reeling and scratching their heads as to why/how they could lose out on Seager to the Rangers with Los Angeles being the second-largest market in the sport.
MLB・6 DAYS AGO
FanSided

An MLB Network analyst eyes this former Dodger to replace Andrew McCutchen. When the Philadelphia Phillies declined the $15 million team option for fan-favorite outfielder Andrew McCutchen earlier this month — making him a free-agent — the left field position immediately became one of the biggest areas the organization has to address this offseason.
MLB・20 DAYS AGO
Dodgers Nation

Dodgers: Trea Turner Addresses The Possibility of Signing an Extension

When the Dodgers landed Trea Turner in a trade with the Nationals this year, they had to be planning for the future. Corey Seager was set to hit the free-agent market, and the consensus seemed to be that they had brought on his replacement for 2022. But beyond 2022 remains...
MLB・16 DAYS AGO

Last week, the NL Cy Young Award was announced and, sadly, it didn't go to any of the three deserving Dodgers starters. Julio Urias, who was the only pitcher in baseball to get twenty wins last season, finished eighth, while Max Scherzer and Walker Buehler finished third, and fourth ...
MLB・14 DAYS AGO
NBC Los Angeles

Let's face it, the Los Angeles Dodgers were dealt a huge blow on Monday. First it was the loss of Cy Young Award finalist and arguably the best pitcher on the staff last season in Max Scherzer. Scherzer agreed to sign a three-year, $130 million dollar contract with the New York Mets, making him the highest paid player by annual average value in MLB history.
MLB・7 DAYS AGO
FanSided

The hot stove will be cranking somewhat soon, but for now we’re living in the world of speculation. That’s what makes the offseason fun, anyway. For the Los Angeles Dodgers, a ton of heavy lifting has to get done with so many key players hitting free agency (plus a likely legal battle with Trevor Bauer that will determine money being freed up or thrown away). You already know who the team is in danger of losing.
NFL・23 DAYS AGO
Inside The Dodgers

The season has ended and the Dodgers are all scattered across the country enjoying the time off. But there is one former Dodger still working hard. Albert Pujols, a free agent who played for the Dodgers last season, is playing in the Dominican winter league. On Friday, he hit his first home run of ...
MLB・2 DAYS AGO
dodgerblue.com

The MLB offseason historically is a time for players to get married as it represents the only significant down time in the calendar for them, and this year that applies to Mookie Betts and Caleb Ferguson. The left-hander was first to tie the knot, as Ferguson and his fiancée Carissa...
MLB・14 DAYS AGO
Field Level Media

The New York Yankees are favored to win the sweepstakes for one of the two marquee shortstops left on the free agent market. Carlos Correa‘s name has long been tied to the Detroit Tigers as a potential destination, while returning to the Houston Astros remains a strong possibility as the market shakes out.
MLB・7 DAYS AGO
Inside The Dodgers

After seven years in Los Angeles, free-agent Corey Seager signed a ten-year contract with the Texas Rangers. To call Seager's Dodgers career outstanding is an understatement. He earned 2016 National League Rookie of the Year, a two-time All-Star, NLCS and World Series MVPs, and a World Series ...
MLB・18 HOURS AGO
MLB

Legendary Dodgers broadcaster Vin Scully penned the following essay on Gil Hodges, who is a candidate on the National Baseball Hall of Fame’s Golden Days Era Ballot. The 10-name Golden Days Era Committee ballot features candidates whose primary contribution to the game came from 1950-69. A 16-member committee is scheduled to meet on Sunday to discuss each candidate’s credentials for enshrinement, with any one candidate needing 12 votes to be elected to the Hall of Fame.
MLB・7 DAYS AGO